The Space Jam Sequel Has Found Itself A New Title 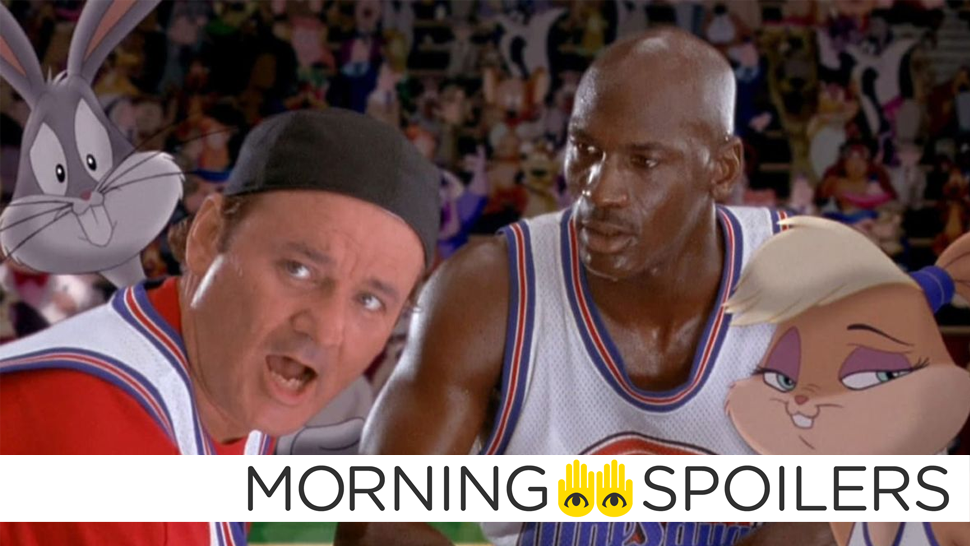 Bill Murray cordially invites you to slam, and bids you welcome to the jam. (Image: Warner Bros.)

Patty Jenkins teases her plans for the Amazons after Wonder Woman 1984. Grant Gustin says there were talks for more Flash on the way before the coronavirus lockdown. You could be eaten by a dinosaur in the next Jurassic World. Plus, what’s to come on DuckTales, and get ready for even more of The Boys. Spoilers get!

Space Jam 2 is now officially titled Space Jam: A New Legacy, according to an Instagram video from LeBron James himself. Well, a hat on his head really.

The Girl Who Loved Tom Gordon

Deadline reports I Am Not OK With This co-creator Christy Hall has been hired to write a film adaptation of Stephen King’s The Girl Who Loved Tom Gordon for Village Roadshow. The story follows a 12-year-old girl lost on the Appalachian Trail who hallucinates Boston Red Sox relief pitcher Tom Gordon is by her side, imparting wisdom.

A charity sweepstakes raising money for Feeding America, Meals On Wheels, World Central Kitchen, and No Kid Hungry will allow two lucky fans the once-in-a-lifetime-opportunity to be eaten by a dinosaur in Jurassic World: Dominion.

Click the link to see my response to @justinbieber ‘s #ALLINCHALLENGE hint hint…. you could win the greatest prize anyone could possibly imagine having to do with being eaten by dinosaurs. ????????????♥️ https://t.co/K29P6nXLIK

In a new interview with Total Film magazine (via Games Radar) Patty Jenkins revealed she has an arc in mind for a third Wonder Woman movie, as well as a spinoff film focusing on the Amazons of Themyscira.

We have, I wouldn’t call it a first draft but I’d call it a ‘scriptment’: A written-out story, part outline, part script, part thing. We know where we want to go, we know the thematics. We call it “the toy box.” It’s like a 100-and-something page document, but some of it’s written. It’s a good place to start. Then we start thinning it out, and then we work with the writers to get the right scenes, and then we start working with Keanu’s dialogue. It’s a very outward-in process for us. Then, we’ll do the inward-outward process which is about character. So, to answer your question, I’m in a happy place where we are in development. We got, not quite a locked-in first draft, but we’re in a place where we know what we want do and where we want to do it.

Vertical Entertainment has acquired the distribution rights to Gavin Rothery‘s Archive, starring Theo James, Stacy Martin, Rhona Mitra, and Toby Jones. The story follows a scientist developing a human-equivalent A.I. hiding the fact he only wants to create a facsimile of his dead wife from potential investors.[Deadline]

Appearing as a guest on Michael Rosenbaum’s Inside of You podcast, Grant Gustin revealed, “conversations actually had started already for adding a potential eighth and ninth [season of The Flash], but then this pandemic happened, and everything has stopped.”

Meanwhile, Barry rescues Iris from the Mirrorverse in the synopsis for “Success Is Assured,” the de facto season six finale of The Flash.

Good news—Spoiler TV reports The Terror has been renewed for a third season at AMC. Though no details on the premise are available at this time, the writing staff is said to include Evan Endicott, Claire Carre, Charles Shapo, Victor LaValle, and Josh Stoddard.

The Cinema Spot is also reporting The Boys has “landed an early season three renewal” at Amazon.

The Legends form a college sorority in order to retrieve Dionyus’s chalice in the synopsis for “Freaks & Geeks,” airing May 12.

SISTERHOOD – The Legends find themselves going back to college and form a sorority in order to try to retrieve an ancient artefact called the Chalice of Dionyus that will help Charlie (Maisie Richardson-Sellers) operate the Loom of Fate. Proud to be back at his college, Nate (Nick Zano) falls under Dion’s spell, letting him know of Sara (Caity Lotz), Astra (Olivia Swann), Ava (Jes Macallan) and Charlie’s plan to get the cup. Meanwhile, on a father-daughter weekend, Rory (Dominic Purcell) takes Lita (guest star Mina Sundwall) on a college tour, but Rory bails on Lita for an unexpected reason. Tala Ashe and Matt Ryan also star. Nico Sachse directed the episode written by Matthew Maala & Ubah Mohamed (#512). Original airdate 5/12/2020.

When Project Non Nocere fails, Lena and Lex are at the mercy of Rama Khan in the synopsis for “The Missing Link,” the May 10 episode of Supergirl.

Meanwhile, a maniac is targeting Gotham’s intelligentsia in the synopsis for “A Secret Kept From All the Rest,” the May 10 episode of Batwoman.

CRACKING THE CODE – When members of Gotham’s intelligentsia begin disappearing, Commander Kane (Dougray Scott), Sophie (Meagan Tandy) and the Crows go searching for the newest homicidal threat to the city. In the meantime, Kate (Ruby Rose) is consumed with someone’s betrayal and starts questioning the loyalty of everyone around her just when she needs them most. So when Luke (Camrus Johnson) and Julia (guest star Christina Wolfe) go missing, Batwoman must rely on Mary (Nicole Kang) and a former foe to deploy her rescue mission. Meanwhile, Alice (Rachel Skarsten) enlists Tommy Elliot (guest star Gabriel Mann) to help acquire an elusive item that her sister also seeks. Greg Beeman directed the episode written by Jerry Shandy and Kelly Larson (#119). Original airdate 5/10/2020.

Lewis hires a gangster to fight Nazis in the synopsis for “Josefina and the Holy Spirit,” the fourth episode of Penny Dreadful: City of Angels.

Tiago scours Sister Molly’s beach house for clues, leading to disquieting revelations. Councilwoman Beck proposes an alternate route for the Arroyo-Seco motorway, infuriating Townsend. Peter Craft invites Elsa to a party at his home, inflaming the suspicions of his wife Linda. Lewis asks the gangster Benny Berman to help battle the growing Nazi menace in LA. And after Josefina Vega has a harrowing encounter with the police, Mateo seeks retribution with his new Pachuco friends as Josefina pursues spiritual enlightenment with Sister Molly.

Liz is the third wheel on a date with Kyle and Steph in the synopsis for “The Diner,” the May 11 episode of Roswell, New Mexico.

Josie “turns to someone unexpected for help” with Alexander in the synopsis for “Come Together,” the season finale of Katy Keene.

SEASON FINALE – Katy (Lucy Hale) is starting to see things a little more clearly and needs Gloria’s (Katherine LaNasa) help to make her plan work and it leads her to unexpected opportunities. Eager to make things right, Pepper (Julia Chan) finds a way to make it right with Jorge (Jonny Beauchamp) and Josie (Ashleigh Murray), but she must also try to let go of people in her past. Jorge holds a rally to stop the sale of his parents building, but he has no idea who he is going up against. Meanwhile, Josie is worried about Alexander (Lucien Laviscount) and turns to someone unexpected for help. Zane Holtz and Camille Hyde also star. Maggie Kiley directed the episode written by Roberto Aguirre-Sacasa & Michael Grassi (#113).

Abigail, Raelle, and Tally complete Basic Training in the synopsis for “Witchbomb,” the season finale of Motherland: Fort Salem.

Raelle, Abigail, and Tally graduate from Basic Training making Abigail more desperate than ever to prove her unit belongs in War College. Alder eyes the unit for a rescue mission while Anacostia and Scylla find common ground.

Tia attacks Bristol Cove in the synopsis for “A Voice in the Dark,” the May 21 episode of Siren.

Tia unleashes a deadly attack on Bristol Cove. Ryn, Ben and Maddie race against time to find a cure for Xander’s mysterious illness, while anticipating Tia’s next move. Baby Hope returns to land to reconnect with Ryn.

Finally, Gizmoduck visits Japan in a clip from this week’s episode of DuckTales.