Tacky Branding Is Not The Way Back From The Coronavirus Shutdown 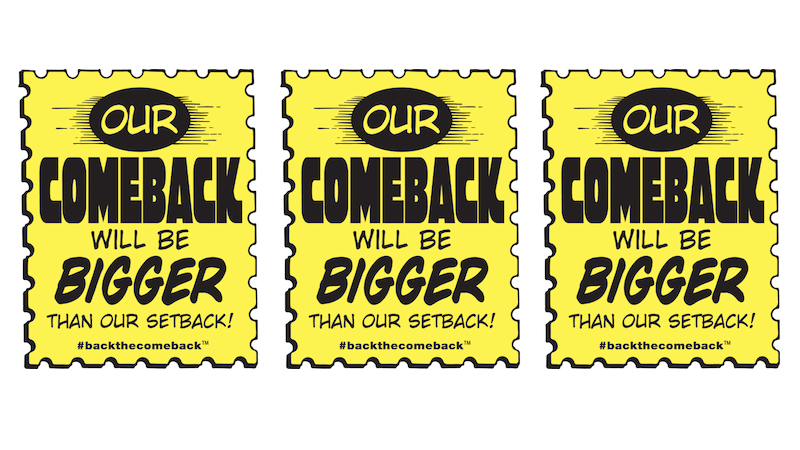 Like many other branches of the entertainment industry’s consumer-facing side, comic book shops haveÂ been hit hard by the covid-19 pandemic. Millions of people are staying home, and in many cases shuttering their businesses, for fear of risking exposure to a currently incurable virus that’s killed hundreds of thousands of people worldwide.

Despite the fact that people still can’t safely leave their homes and be in public among crowds of people, local governments around the U.S. have begun to gradually ease social distancing orders, so as to â€œopen the economyâ€ again. The idea being that, as more workers with non-essential jobs return to work, people will begin patronising businesses regularly, and things can return to â€œnormal.â€

Quotation marks are being used here because the presumption that encouraging small businesses to resume operation”and encourage people to come into their retail locations right now“is grounded in the misguided belief that stores operating at drastically reduced capacity with less foot traffic while also active risking the health of both employees and customers would be anything resembling â€œnormal.â€

Even more pressing, it’sÂ already been documented how, even after the virus has been contained in areas, new spikes can coincide with the reopening of highly-trafficked businesses. This is the difficult reality most every business owner has had to contemplate over the past few weeks, as they’ve struggled to stay afloat while maintaining some semblance of functionality in the midst of a pandemic.

â€œOur comeback will be bigger than our setbackâ€ is what Diamond Comics CEO Steve Geppi”the distributor that effectively holds a monopoly over the physical shipment of comic books for a vast majority of publishers in the industry in the U.S. and much of Europe”is saying in an attempt to drum up excitement about its plans to resume shipping physical comics to brick-and-mortar stores. Diamond itself stopped shipping books at the end of March following a weeks-long shutdown caused by the spread of the novel coronavirus that’s killed over 80,000 Americans and infected over 4 million people worldwide.

In an interview with Newsarama, Geppi characterised his â€œBack the Comebackâ€ campaign as a response to the â€œsetbackâ€ caused by the pandemic. By partnering with a number of comics publishers to print covers featuring a â€œBack the Comebackâ€ logo styled after the Comics Code Authority seal, Geppi and Diamond believe that the books will become the kind of â€œpandemic eraâ€ collectibles that would make people want to slap on a face mask and drive right down to the local comics shop.

Geppi explained that he’s confident that the initiative could be successful because of the way that the pandemic has affected virtually every aspect of American production regardless of industry. â€œIt’s almost a contest now”how does our industry recover versus another? Let’s show them who we are. Let’s show our passion,â€ Geppi said. â€œYou watched us shrink and shutdown, but now’s our chance”all things being equal”for us to muster up.â€

In addition to the pandemic era-branded limited edition comics, Geppi and Diamond”like several recent initiatives such as Jim Lee and DC Comics’ Creators 4 Comicsâ€ social media auctions”are also donating $US50,000 ($77,549) to the Book Industry Charitable Fund, Comic Book Legal Defence Fund (CBLDF), and Jack Vasel Memorial Fund, by way of the sale of â€œBack the Comebackâ€-branded shirts, as well as an auctioning off items from Geppi’s personal collection.

The initiative’s Twitter page also posted a video in which Geppi encouraged people to show their support for their local store by posting a photo and tagging the shop (and asking others to do the same), in a way that large brands often instruct consumers to do when they would like folks to generate free content for them. Geppi even suggests tagging individual writers or artists and he personally â€œchallengedâ€ Todd McFarlane, Kevin Smith, Mike Richardson, Paul Levitz, and Ross Richie to â€œback the comebackâ€ by making their own videos and challenge five more people. As of publishing, Boom Studio’s CEO, Richie, has retweeted the Geppi video.

All of this is to say is that â€œBack the Comeback’sâ€ whole deal is that it’s a Diamond-backed ad campaign that revolves around using These Trying Times to both sell products and throw a bit of money at an industry-wide collapse.

Local comic book and game stores are safely reopening, restarting and rebuilding, and their comeback will be bigger than their setback! That’s why Geppi Family Enterprises Chairman and CEO, Steve Geppi, is challenging pop culture fans everywhere to #BackTheComeback! pic.twitter.com/bDZFMTwAEO

This is all made that much more complicated when you recall the important fact that Diamond’s essential monopoly on distribution within the comics industry”they exclusively ship comics from major publishers including DC, Dark Horse, IDW, Image, Marvel, and More”also lead to the distributor hastily releasing its own statement after DC Comics made the decision to take some of its comics distribution into its own hands without Diamond’s involvement, telling press â€œOur focus is squarely on getting our industries’ entertainment products in the hands of fans as quickly and as safely as possible.â€

There’s a very distinct way in which â€œBack the Comeback’sâ€ vibe and message feel less geared towards actually attempting to provide relief to local comic book stores, like the aforementioned other charitable efforts throughout the comics industry, and more like a very obvious attempt at making Diamond look proactive at a time when it’s decided to ship product that’s also in service of its bottom line.

The important thing to bear in mind, though, is that all of this presumes that when new comics start being stocked in stores in the coming weeks, people will show up to buy them, and the optimistic view assumes that these people will be able to shop safely.

Though comic book show owners do not work for Diamond, the way Geppi presents the initiative has the air of someone who believes themselves to be rallying the troops in the face of a tangible enemy when in reality he’s imploring people”who again do not work for him”to make risky decisions about their lives so that his company can make money. Perhaps even more galling is the way â€œBack the Comebackâ€ is predicated on the idea that fans could somehow see comic books released during a global pandemic as the sort of commemorative collectibles that would be valuable enough to make them risk going to shops on a weekly basis.

What comic stores need right now is better access to the Payment Protection Program (PPP) loans meant for small businesses that were so swiftly gobbled up by large, publicly traded companies when the program was first launched earlier this year.

Comics shop owners need rent relief so they aren’t forced to pay for locations many literally cannot afford to run right now. What they don’t need are branded comic books and some slapdash t-shirts insisting that everything’s going to be OK just because a big fish in a small pond says it’s going to be.