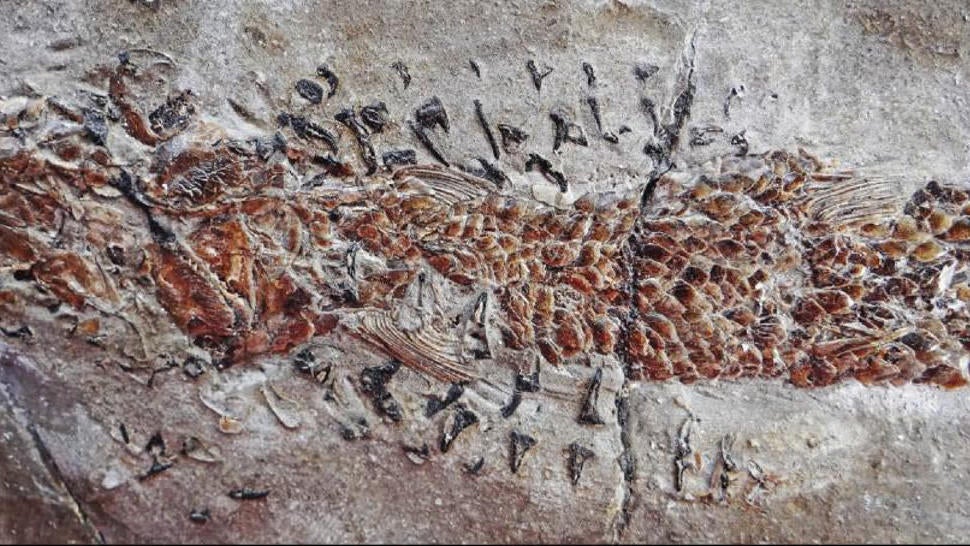 A segment of the fossil showing the captured fish (brownish coloured scales) with the cephalopod’s arms wrapped around it. (Image: Malcolm Hart, Proceedings of the Geologists’ Association)

A re-analysis of a fossil found in England during the 19th century reveals that it depicts a 200-million-year-old scene in which a squid-like creature is still clutching onto its prey.

The fossil preserves two extinct species: Clarkeiteuthis montefiorei, a squid-like creature from the Jurassic period, and Dorsetichthys bechei, a herring-like fish. C. montefiorei was an ancient cephalopod that resembled modern cuttlefish. It had an ink sack, so it likely used ink to escape from predators like modern octopuses do today, explained Malcolm Hart, the lead author of the new paper and a paleontologist at the University of Plymouth.

Hart and his colleagues say the fossil preserves an extraordinarily rare predation scene, in which the cephalopod’s arms are still wrapped around its victim. What’s more, the fish’s head was crushed, further evidence of an ancient struggle. Details of this fossil analysis are set to appear in an upcoming edition of Proceedings of the Geologists’ Association.

The full fossil, with the body of the squid (left) and its arms wrapped around the fish (right). (Image: Malcolm Hart, Proceedings of the Geologists’ Association)

The fossil was found on the shores of Dorset, England, back in the 19th century and has since been kept at a British Geological Survey collection in Nottingham.

“I have been tracking down specimens collected on the Dorset Coast, both new ones and historical,” Hart told Gizmodo. “This specimen was on loan from the British geological Survey and in Lyme Regis Museum, where it was studied. It is glued in a case and so can only be looked at or imaged,” as no other work can be done on the fossil, such as isotopic or geochemical analysis, he said.

This is now the oldest known fossil involving a diplobelid (the technical term for this squid-like cephalopod), predating the previous record by 10 million years. The sediment in which this fossil was found dates back to the Sinemurian age, some 190 million to 199 million years ago.

“The predation is off-the-scale in terms of rare occurrence,” said Hart. “There are only a very few specimens—between five to 10—known from the Jurassic, and this is the only one from this stratigraphical level in Dorset. It is also the oldest known in any part of the world.”

A close-up view of the fish, showing its crushed skull and the arms of the cephalopod. (Image: Malcolm Hart, Proceedings of the Geologists’ Association)

As to how the two creatures managed to become preserved in such an unusual way, Hart and his colleagues can only speculate.

“The arms with the hooks are clearly holding the fish, but why they survived to settle to the sea floor and then be preserved is exceptional,” Hart told Gizmodo. “Why they were not eaten by other [animals] is not known.”

That said, the authors presented two possible scenarios: Either the cephalopod died while trying to subdue the fish (because it was too big, for example), or it died while trying to hide its meal from rivals, succumbing to low oxygen levels at the seafloor. In either case, both the cephalopod and the fish settled onto the muddy seafloor, allowing for the preservation.

The trouble with the low oxygen theory, however, is that this scenario should exclude the presence of certain other specimens, which isn’t the case. The sediment the fossil was found in contained fossils of other creatures that required dissolved oxygen to survive, explained Hart. Ultimately, “we do not know” how these two came to be preserved together, he said.

The analysis sheds new light on the anatomy of diplobelids, like the types of hooks they used, and proves that diplobelids fed on fish, as was previously theorised. Seeing the two together “helps create the picture,” said Hart.