With the three Skywalker trilogies over and done with for now, what better than to celebrate the made-up Star Wars holiday than to re-examine some weird facts we all glossed over. Here’s 10 strange (and some downright freaky) facts you probably didn’t know about to celebrate.

1. Yoda was meant to be played by a monkey

You read that right, the original plan was that Yoda would be played by a monkey. They even trained it to use Yoda’s cane but the unnamed monkey had a penchant for removing his Yoda mask and proving difficult to work with. Thankfully, the idea was eventually binned and we got the lovable combo of animatronics and puppetry we all know well instead. When the final episode of the original trilogy was first announced, it came with a different name to what we know now. Lucasfilm released posters for Episode III with Revenge of the Jedi but it was later changed to Return of the Jedi at the insistence of George Lucas because, as we know, Jedis don’t enact revenge.

3. Ewan McGregor tried to add his own lightsaber sounds in during filming Like any big nerd, McGregor apparently made his own lightsaber sounds when wielding the weapon during filming. George Lucas had to remind him that the sound effects team would handle those sounds and none of vrrrrrms and thrums would make it to the final cut.

Apparently, not taking the high ground, Hayden Christensen also had trouble not making these sounds.

While it wasn’t actually licenced, the first Star Wars game ever made was by Apple for its Apple II ” an 8-bit home computer. It was released on a cassette tape and given the name Starwars and had players shoot enemies as a TIE fighter.

You can play it online if you want to give it a spin.

5. We nearly got a Luke Starkiller Sounding more like a Sith Lord or an end-of-days spaceship, George Lucas originally had Luke’s surname pencilled in as ‘Starkiller’ and it remained that way months into filming.

Lucas said he eventually changed the name because of the connotations to Charles Manson, a ‘star’ killer, and landed on the Skywalker name we are all familiar with.

6. *NSYNC filmed a scene for Star Wars: Episode II – Attack of the Clones but it was cut The baddest (NB: Actually very good boys) boy band in the land was due to make a cameo on Episode II of the series but was unceremoniously canned.

The group, minus Lance Bass and Justin Timberlake, had filmed two scenes as Jedis for the film, according to the Huffington Post, including the Geonosis battle against droids as well as in the background of a scene between Yoda and Obi-wan Kenobi.

No official word was given as to why the scenes were cut but one member, Joey Fatone, told HuffPost Lucas told him it was due to negative fanbase criticism about their inclusion as well as some complications about having the group’s image in the final cut.

7. You can still visit Skywalker’s Tatooine family home in Tunisia Despite being built back in the late 70s, much of the original Tatooine set remains nestled in southern Tunisia.

The iconic Skywalker home is in a place called Matmata, which is understandably known by tourists for featuring the domed troglodyte structures. The abandoned film set of Mos Espa, a four-hour drive away, also stands to this very day.

8. Ewoks speak a mixutre of Tibetan and Nepalese Ben Burtt was the sound designer for the film series and was tasked with creating the language of the Ewoks. Drawing inspiration from a BBC documentary he watched, he apparently used a mixture of Tibetan and Nepalese as the basis for their language.

9. Tupac Shakur auditioned for Mace Windu before his untimely shooting According to a report from the Rolling Stone, legendary rapper Tupac auditioned for the role of Mace Windu, which was later given to Samuel L. Jackson. Tupac was killed in a shooting in September 1996 and the movie started filming in June 1997 so it’s not exactly clear when the supposed audition happened but the timeline makes it possible.

10. Luke Skywalker may have killed thousands more than Darth Vader While we all like to think of Luke as the good guy, one video points out how it’s basically all a lie. YouTuber Mr Sunday Movies uploaded a supercut of all of Skywalker’s kills and it reaches a grand total of 369,470 kills ” and it’s not even including the two movies he’s involved in the newest trilogy.

The majority of those kills, more than 300,000 of them, can be attributed to Skywalker’s destruction of the Death Star ” a weapon that may well have contributed to many more deaths.

Yes, they’re supposed to be bad guys but as the series shows us over and over again, no one’s un-redeemable. Still, it’s a far cry from Darth Vader’s 59 on-screen kills, which doesn’t include the destruction of Alderaan. History is told from the accounts of those who survive and Star Wars is no different apparently. 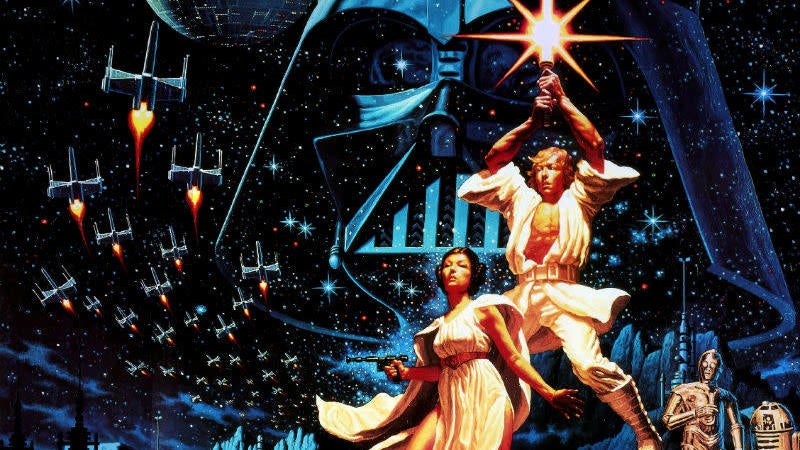 The Story Behind One Of Star Wars' Most Recognisable Posters

If two people made one of the most iconic Star Wars posters ever in less than two days, wouldn't you want to hear that story?