Compared to the audio quality of digital files and CDs, analogue cassette tape was kind of awful. And as YouTube’s Kris Slyka discovered, it’s an even worse medium for recording and playing back video, but quality issues don’t make Slyka’s clever hack of an old cassette recorder any less impressive. 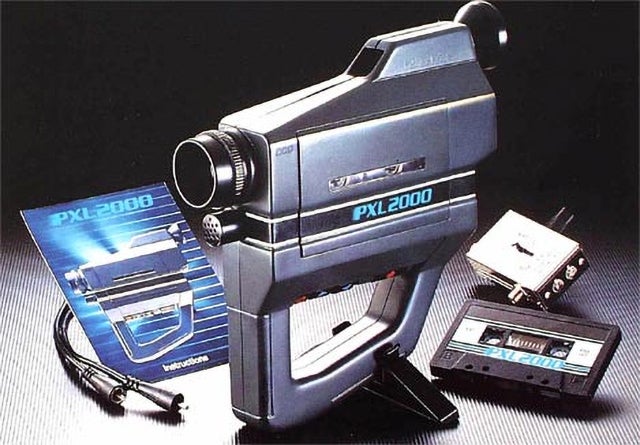 The Fisher-Price PXL 2000 PixelVision could record low quality black and white video on cassette tapes back in the ‘80s. (Photo: Mattel, Matt Bucy)

Some of our more veteran readers might remember that Mattel took a similar approach back in the ‘80s with the Fisher-Price PXL 2000 PixelVision camcorder designed specifically for kids. To keep it semi-affordable and small, the PixelVision used audio cassette tapes which were readily available and cheap at the time. To accommodate the demands of video, the camcorder ran the tape roughly nine times faster than a tape recorder would, but the results were still grainy, wavy, black and white video that suffered from playback speed issues. As a result, the PXL 2000, despite being innovative, was far from a hit.

Kris Slyka decided to take another stab at repurposing cassette tapes for capturing and playing back video, but since he had no intention of creating a mass-produced device for consumers, he took a different approach. Using a stock but high-quality Sony tape recorder, he devised a method of encoding full-colour videos into a signal that could be properly recorded on an audio cassette using the recorder’s stereo line-in connections. But he had to cut corners.

Since he’s based in a county that used the PAL format for standard definition TV broadcasts, Slyka calculated that video with a resolution of 768×576 pixels running at 25 frames per second amounted to a little over 11,000,000 pixels of video data generated every second. That would require bandwidth that far exceeds what standard audio cassette tapes were designed to capture, they simply didn’t have enough fidelity to accommodate a datastream that heavy. The only solution to the problem was to cut some corners and make some compromises when it came to image quality.

It turns out that “some” compromises amounted to taking a 768×576 pixels 25 frames per second video stream and crushing it to a resolution of just 100×75 pixels running at a paltry five frames per second. To smooth out choppy video Slyka was able to double the frame rate by interlacing the video images, but that resulted in the number of pixels in a given frame being halved. And because audio cassettes could accommodate two channels of audio for stereo sound, Slyka found a way to use the second audio channel to include colour information as well.

The resulting quality of the video image falls somewhere between abysmal and nearly unwatchable, and with both channels carrying video data, there’s no way to include an accompanying soundtrack. As Slyka points out, there’s a good reason larger VHS cassettes were invented (and their even larger, professional-grade Betacam cousins) to increase the size and sensitivity of the magnetic tape in order to accommodate bandwidth-heavy analogue video signals.