Elon Musk is tweeting again. This time it’s about the upcoming Tesla Cybertruck’s alleged, um, capability to apparently float, a least “for a while.”

I don’t have any other information for you right now other than Musk’s tweet that the Cybertruck will be capable of crossing streams and it will even “float”, according to the executive.

Yes. It will even float for a while.

In a way, you could look at a car’s interior as a giant metal balloon of air. If it’s less dense than the water around it, there will be buoyancy. It all depends on circumstance.

Is Elon Musk claiming that the Cybertruck will intentionally float, like a boat, to allow “batflyer” to fish right out of his futuristic pickup? Or is Musk simply saying, the truck won’t just sink like a rock if you cross water that’s deeper than expected? This really all comes down to Musk’s use of “a while.”

Are we trusting someone who said the truck’s windows were impact resistant, and then had to give the rest of his presentation in front of a truck with smashed windows?

Musk also tweeted out that the Cybertruck will get the Model Y’s heat pump, which is a new addition over the Model 3.

We’ve reached out to Tesla for clarity on the floating thing. It would be on top of a feature list including a built-in load ramp, stainless-steel paneling, adaptive air suspension, claimed 14,000-pound tow rating, three different range options, and allegedly impact-resistance windows that didn’t work in the presentation.

The Cybertruck was originally claimed to go into production by late 2021, but given the state of things that may need to be “floated” downstream a bit. 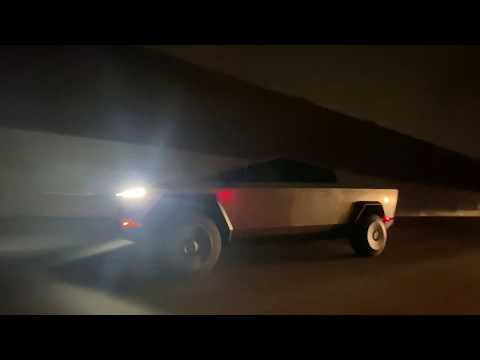 We’ve all seen the peculiarly-designed Tesla Cybertruck on stage and driving on a short course during its debut in November. But if you’ve been wondering what the vehicle looks like on public roads, especially next to standard, run-of-the-mill cars, the answer is: absolutely absurd. Take a look.