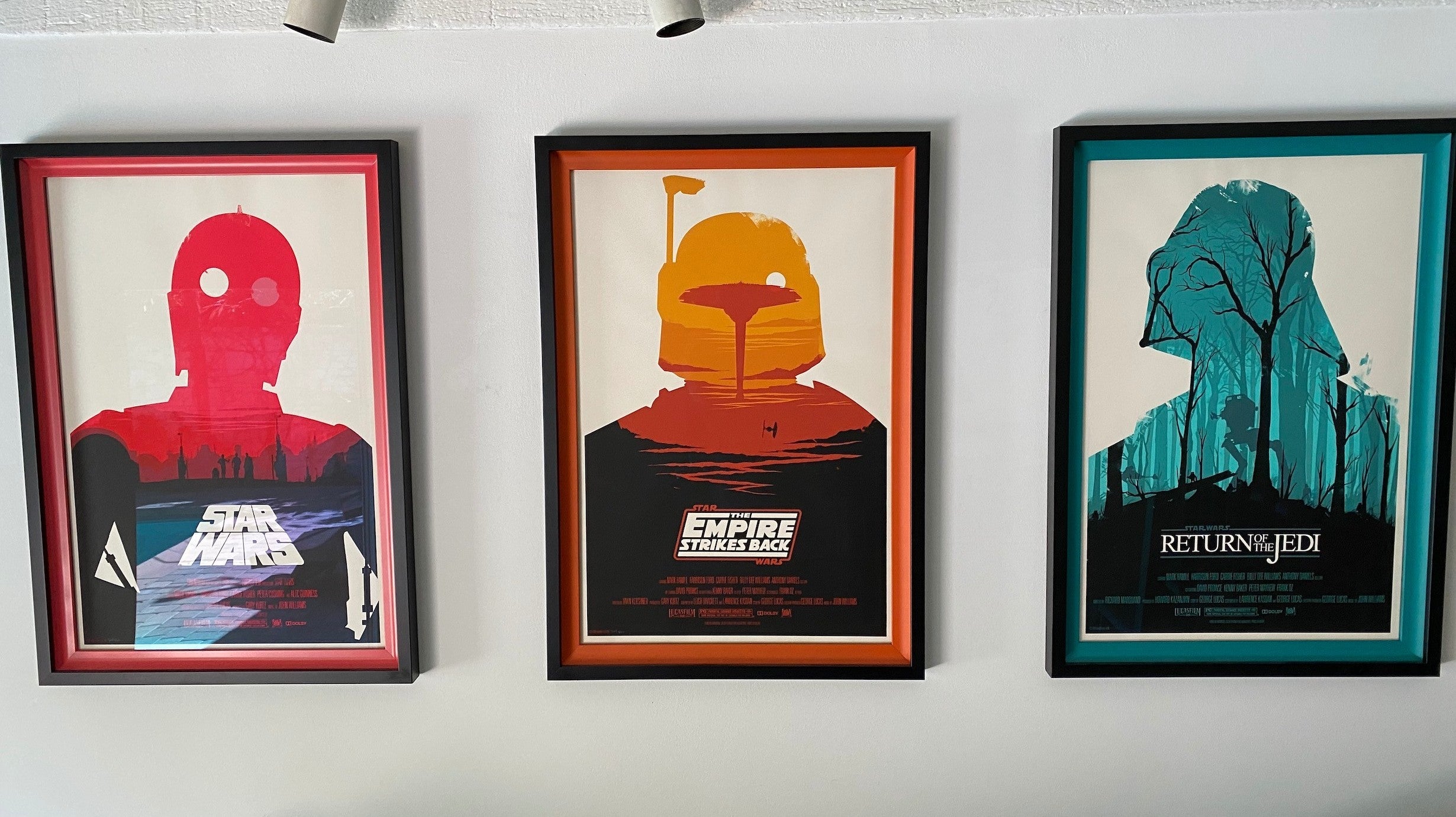 While you’re home, now is the time to decorate your home the way you want it. For example, I hung up my custom framed Olly Moss <em>Star Wars</em> posters. Yes, this is a bit of a humblebrag. (Photo: All Images, Germain Lussier)

Being stuck at home sucks. One of the best things you can do—besides absolutely staying at home—is to make some updates to said home. How do you do that? There are lots of ways. For example, you could clean things; your windows, floors, kitchen, surely those things could use a once over. Of course, that’s not very fun. So we came up with a few activities you can do that are useful, rewarding, and enjoyable that might make staying at home at least a little easier. 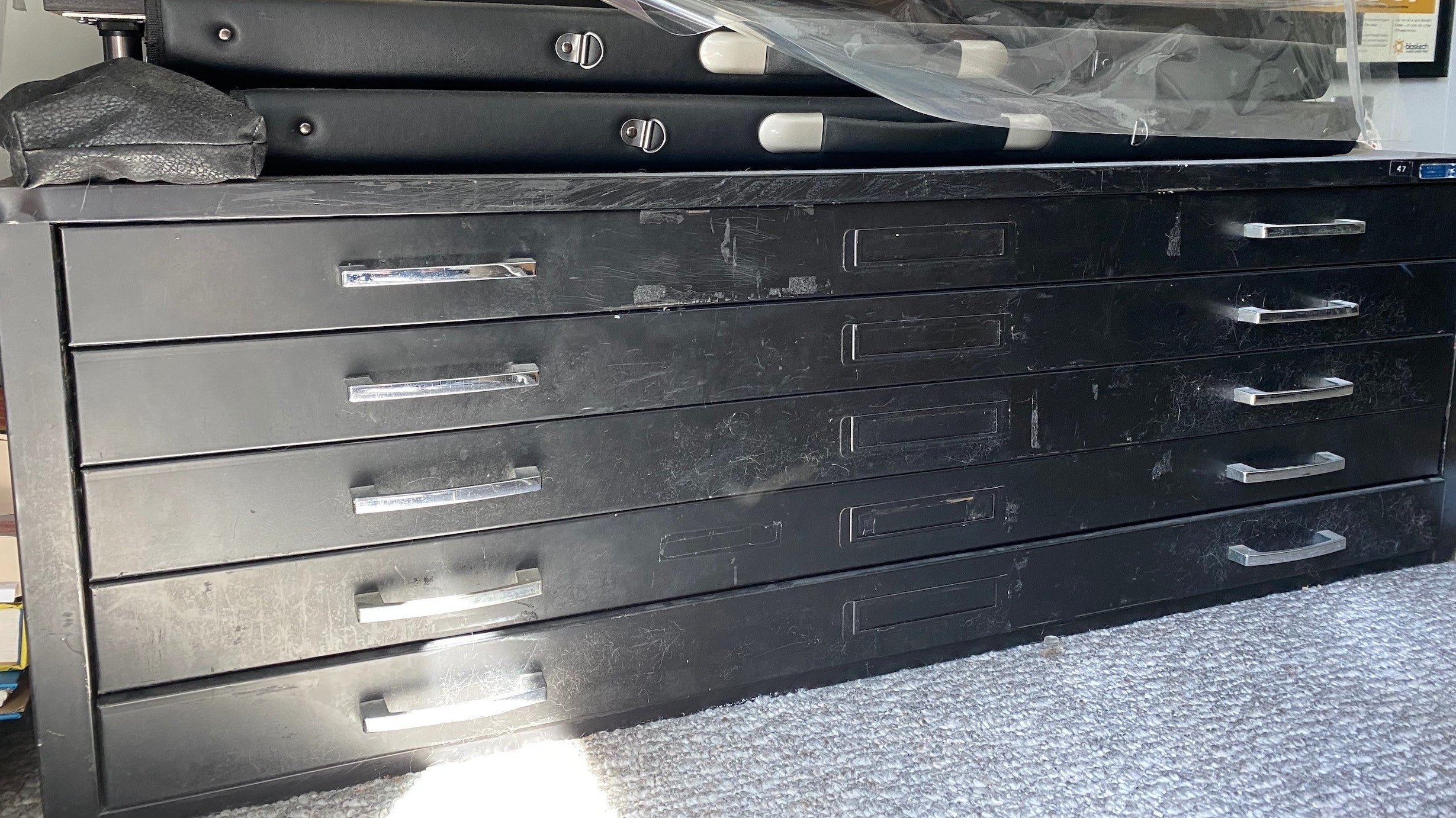 It may not look like much, but my flat file has got it where it counts. As in, it’s filled with organised posters.

If you’re like me, you have piles of crap everywhere. Papers, bills, magazines, basically everything. Well, now is a good time to get that stuff under control. For me, that meant getting my DVD collection and posters in order. For you maybe it means albums, books, comics, action figures, etc. You get the idea.

For my posters, of which I have a lot, I went through and put them into piles. There’s a “Let’s try to get this on the wall” pile, a “Let’s try to sell this pile,” and then an “I like this but I don’t know what to do with it” pile. The first two are self-explanatory, and we’ll talk more about the second one later. For that last category though, I flatted everything out and put it in my flat file (you can see an image above).

Flattening posters is better for their long time life span and I recommend it if you have a place to store them. If you don’t have a flat file to do that, though, you could carefully put them under your bed or a couch. If you have some foam core, use that, but until the stores are back open post-quarantine, a sheet of cardboard will do. You just need something to make moving them easier and to keep them out of the way. You can even start looking into a big portfolio, which would double as storage and display.

For my DVDs, it’s just about figuring out a system that works for you and going with it. Some people go by colour. Others by director or series. Personally, I’m simple—I like standard alphabetizing. Self-explanatory and it takes a long time but, what else are you doing? The result is quite rewarding when everything is tidy and easy to find. 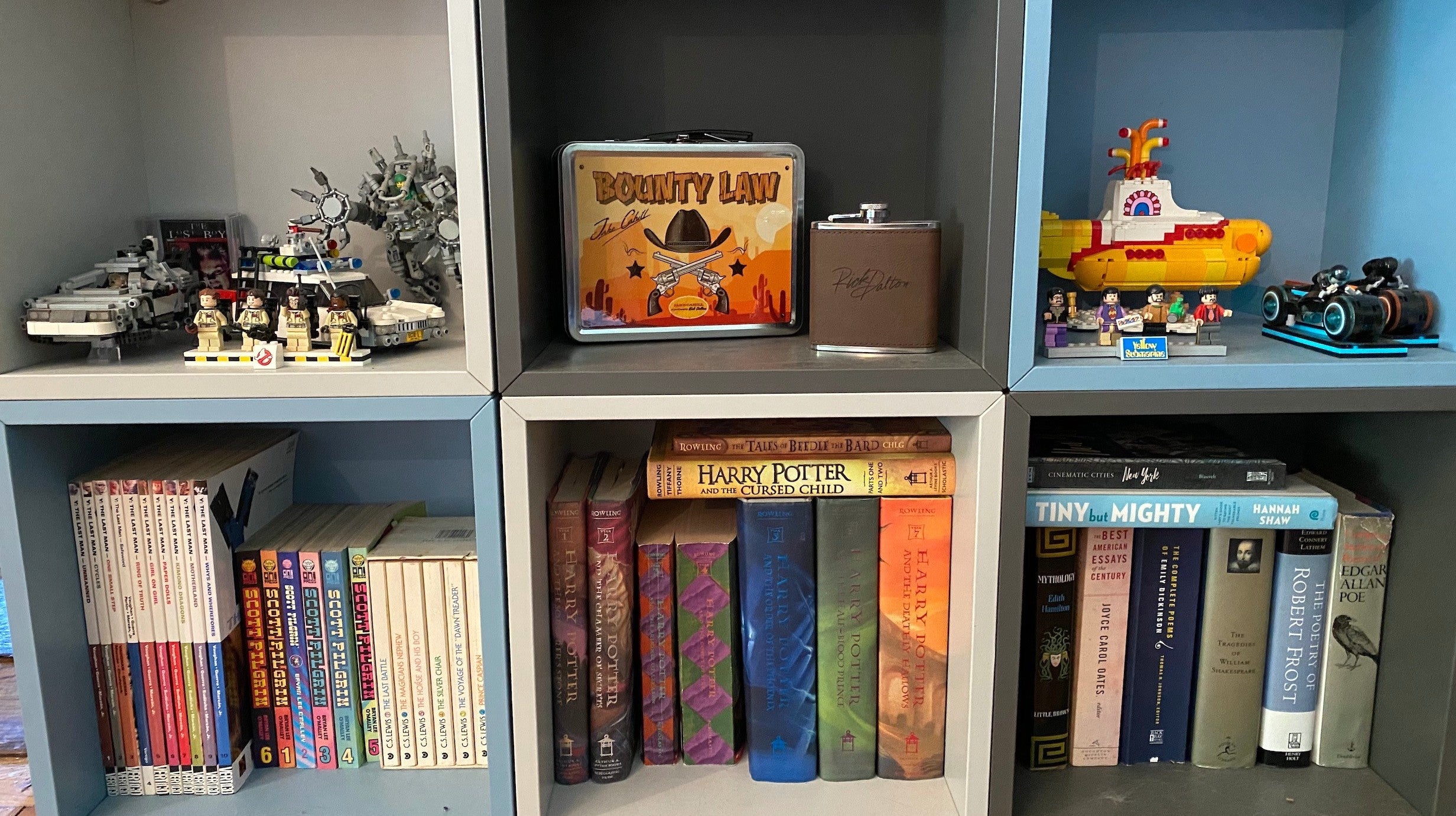 Shelves don’t only have to hold useful stuff, they can have other things too. My wife and I like to display Legos and other memorabilia on them along with books and such.

This one may be a little tricky because you’re more or less stuck with items already in your home. If that wasn’t the case, I’d suggest buying a few frames and finally hanging that art you bought and forgot about [Editor’s Note: Don’t shame me, Germain!! -Jill P.]. Since you probably can’t do that, though, it’s time to do a reexamination of your shelves.

Do you think your shelves are cool? Or are they just shelves? If they’re just shelves, move some stuff around and break it up. Throw a plant here, a candle there. Funko POP on one shelf and wand on another. Do you keep action figures in their cases so one day you can retire on them? If so, put them on the shelves instead of books. You know you have lots of cool little trinkets lying around, so use those to break up the monotony of book, book, book.

Speaking of action figures, if you have them opened, wouldn’t it be fun to create an expansive action scene that lives across your entire bookshelf? (Now, if you’re thinking “I don’t just have action figures laying around, I’m an adult, and if I did why would I carefully place them around a bookshelf” I’ll refer you back to the headline on this article and ask, “Why are you reading this?”)

Meanwhile, yes. Now would be a good time to dust off some stuff. Have you ever seen how much dust collects on a Lego? It’s disgusting. 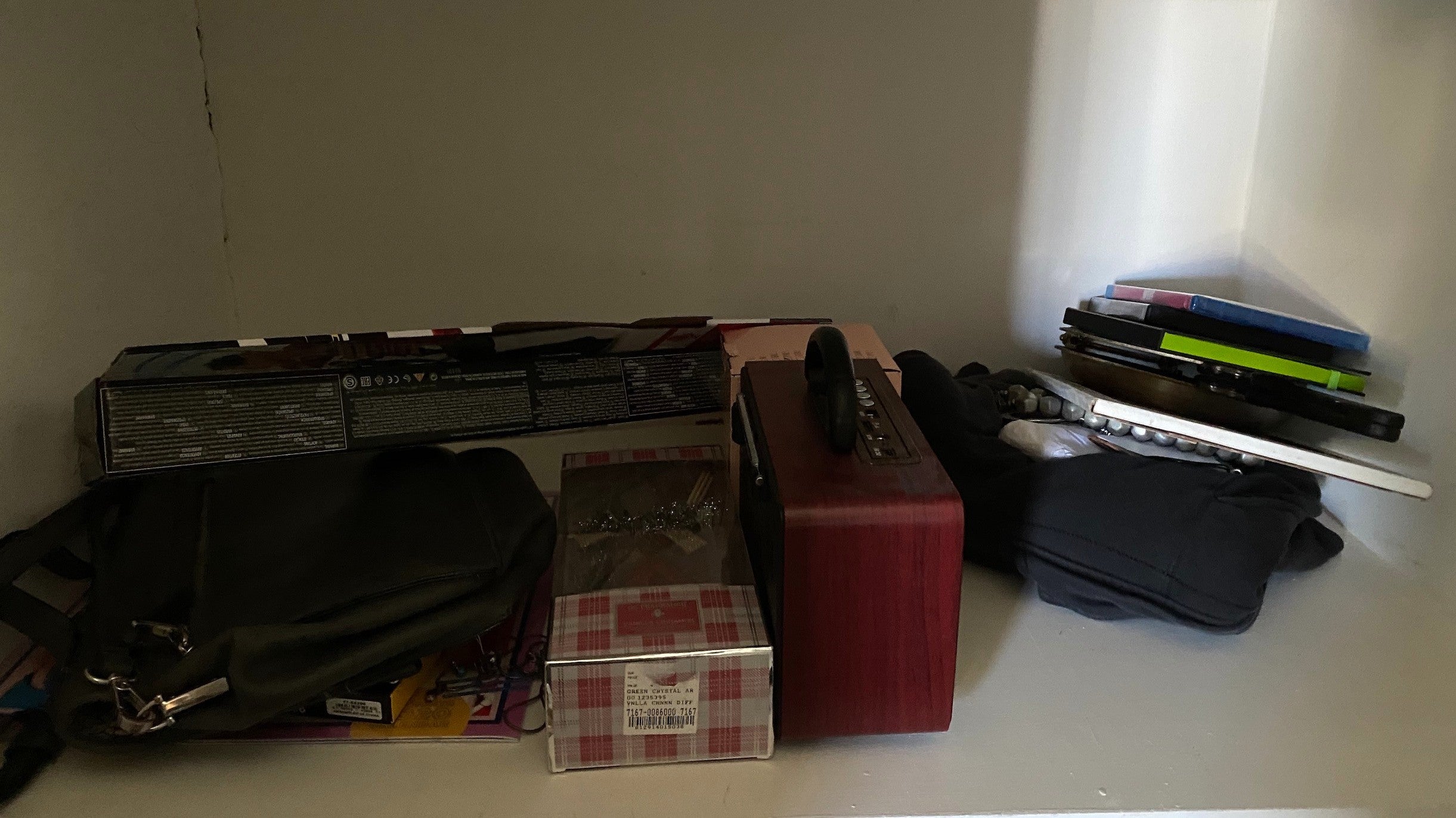 This ugly photo is of the closet where we dump stuff that we, eventually, are going to donate.

We all have too much stuff. It’s true. Clothes, coffee mugs, books, old CDs, etc. Since you’re just sitting there, why not do a little Marie Kondo action and get rid of things you don’t use or need? I’m sure you have dozens of nerdy t-shirts you don’t wear anymore. So take those, throw them in a bag, and put them aside for when you can go donate them. The same goes for old lamps, plates, dismembered He-Man toys, Barbies with their hair chopped off, or those aforementioned in-package action figures you hoped to retire on. (Sorry, but that Ric Olie Phantom Menace toy is not worth anything—donate it to someone who might get some use out of it.) You’ll feel lighter, your place will look bigger, and you’re doing a good deed too.

If there are things you don’t want anymore but think they may be worth money, now is also a good time to prepare to sell them. It might not be the best time to actually sell them as we’re all trying to tighten our belts a bit, but eBay has a drafts function where you can populate a post with all the proper verbiage, research, and super nice photos you suddenly can spend lots of time making very beautiful. Then save it all and, when things get better, put up the listing.

One piece of advice for selling things though. Take photos of everything. The conditions, the serial numbers, the packaging (some people care about box dents!), all of it. Not everyone out there is honest and you’re going to want to be clear about the condition of the items when you send them, especially if they’re collectible and/or easily damaged like a poster.

The thing with being home constantly is you have a lot of time. So after an afternoon of poster hanging, DVD organising, or shelf arranging, take the time to reward yourself. Start working down that pile of books you have by the bed. Watch that show every talks about but you haven’t seen. Rent that movie you missed in the theatre. These things aren’t useful but they’re obviously more fun.