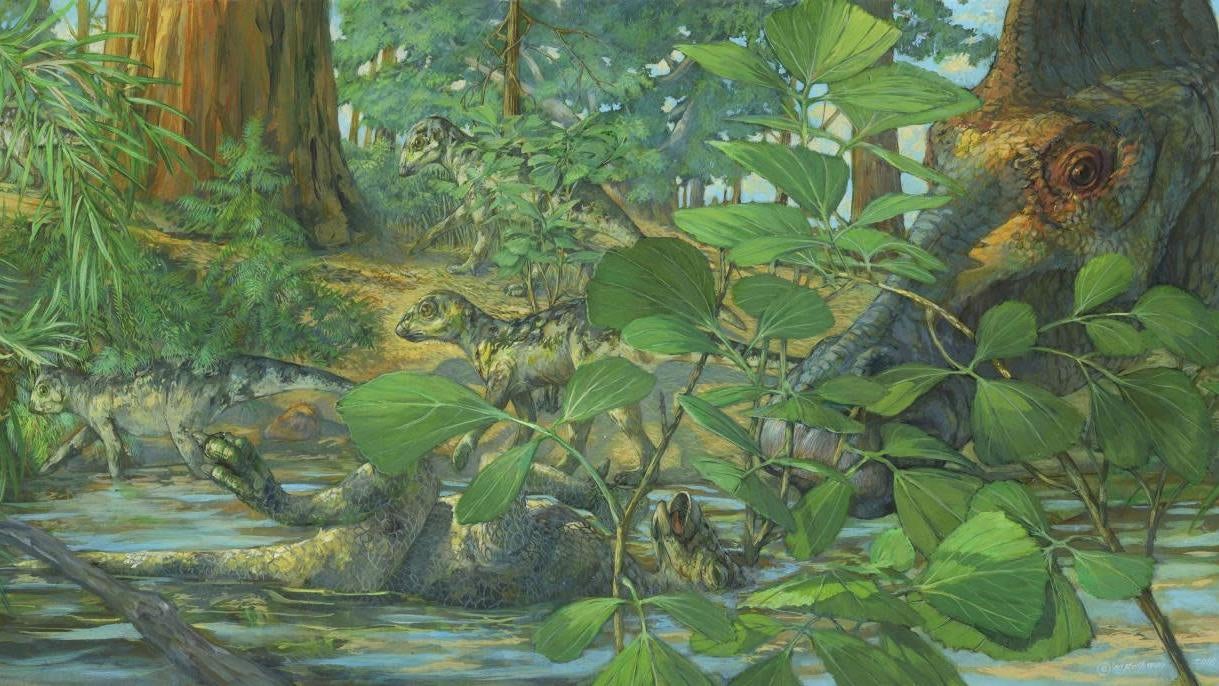 Artistâ€™s reconstruction of the nesting ground of Hypacrosaurus stebingeri. A deceased Hypacrosaurus nestling can be seen with the back of its skull embedded in shallow waters. The mother is portrayed at right. (Illustration: Michael Rothman)

With our deepest regrets to the Jurassic Park franchise, DNA does not preserve well, and no genetic data has ever been recovered for dinosaurs. Recent news suggesting that scientists have found dinosaur DNA certainly sounds exciting, but itâ€™s an extraordinary claim that warrants scepticism.

To be clearâ€”and contrary to a press release put out by the Science China Pressâ€”the scientists, led by Alida Bailleul from the Chinese Academy of Science in Beijing, China, have not actually found dinosaur DNA, but rather materials that are chemically consistent with the presence of DNA. Itâ€™s kind of coded language, but itâ€™s an important distinction, and, quite unfortunately, some media outlets have perhaps read too much into the press release.

At the same time, a literal interpretation of the new paper, co-authored by paleontologist Mary Schweitzer from North Carolina State University, is also being frowned upon, as the experts we spoke to said the newly presented evidence is insufficient, inaccurate, and unconvincing.

Uncovering traces or signatures of dino cellular material, chromosomes, amino acids, and DNA would be a monumental and unprecedented achievement. Protein and DNA do not preserve well. To date, the oldest proteins from 3.8-million-year-old ostrich egg shells. Finding proteins and DNA from dinosaurs that lived tens of millions of years ago, therefore, would represent a monumental shift in our understanding of how well these microscopic structures can be preserved.

â€œThese organic materials… are understood to be among the least stable biomolecules over long periods of time and under the heat of deep burial during fossilisation,â€ wrote Evan Saitta, a researcher from the Integrative Research Centre at the Field Museum of Natural History in Chicago, in an email to Gizmodo. â€œHowever, it is the extreme age of the samples that is striking. This 75-million-year-old fossil is, at least, one or two orders of magnitude older than the expected preservation limits of DNA and proteins,â€ said Saitta, who wasnâ€™t involved with the new research.

For the new study, Bailleul, Schweitzer, and their colleagues studied fossils of duck-billed dinosaur nestlings found in northern Montana back in the 1980s. The fossilized bones were found buried within the Two Medicine Formation, which dates back to the Upper Cretaceous. Analysis of skull fragments yielded traces of well-preserved cells within calcified cartilage, according to the research, which were compared to similar features in modern emus.

Viewed through a microscope, a pair of presumed cartilage cells were seen linked together via an intercellular bridge in a manner consistent with cellular division. A dark blob reminiscent of a cell nucleus was also identified, along with elongated structures presumed to be â€œmorphologically consistentâ€ with chromosomes, according to the new paper.

To see if the original molecules were also preserved, the researchers performed immunological and histochemical analyses of another fossil, also of a nestling Hypacrosaurus found at the same site. When exposed to antibodies of collagen II (the main component of cartilage), the fossilized cartilaginous matrix appeared to react, hinting at the presence of the dinosaurâ€™s original cartilaginous proteins.

Another test was done, in which individual cartilage cells were isolated and exposed to two DNA stains: DAPI (4â€²,6-diamidino-2-phenylindole) and PI (propidium iodide). DAPI and PI can bind to DNA fragments, and in this case, they performed this binding in a manner seen in modern cells, suggesting this dinosaurâ€™s â€œnuclear material survived fossilisation,â€ according to the paper.

â€œWe presented multiple lines of evidence to suggest that remnants of original cells and tissues remain in regions of the skull of this baby dinosaur,â€ wrote Schweitzer in an email to Gizmodo. â€œOne line of evidence is that when we stain these cell-like structures with certain stains, they light up in the same pattern as modern cells containing DNA. So, we can say that we have evidence for the presence of material that is chemically consistent with DNA inside these chondrocyte-like structures.â€

â€œWe do not say that it is dinosaur DNA, although that would be a reasonable interpretation.â€

Chondrocyte cells are found in cartilage only, and they produce the cartilage matrix. Modern chondrocytes contain DNA, so their response to the DAPI and PI dyes is hardly a surprise. What is a surprise, however, is to document a similar response in dinosaur material, explained Schweitzer. That said, Schweitzer and her colleagues demonstrated something similar in 2013 for bone-forming cells (osteocytes), but this is the first such molecular response shown in fossilized cartilage.

â€œWe do not say that it is dinosaur DNA, although that would be a reasonable interpretation,â€ Schweitzer said. â€œWe can only determine that through sequence data,â€ which isnâ€™t possible due the limitations of the source material.

Writing in the paper, the authors acknowledged the possibility that the samples were contaminated, but they said this wasnâ€™t a â€œplausible explanation in this caseâ€ because â€œthe possible preservation of original proteins and DNA in deep time has not been convincingly eliminated with data,â€ they wrote. In other words, the authors are confident that the dinoâ€™s original material is still locked inside the fossil.

The â€œidentification of chemical markers of DNA in Hypacrosaurus suggest it may preserve much longer than originally proposed,â€ concluded the authors in the study.

This is not the first time that Schweitzer has claimed to have uncovered fossilized traces of soft tissue. In addition to the aforementioned 2013 study, Schweitzer has presented evidence of collagen in T. rex fossils and protein fragments in hadrosaurs, among other research papers.

When asked if he agreed with the interpretations presented in the new paper, Saitta said â€œno,â€ and that this paper â€œpresents the most extreme claims to date from some of these authors.â€ In his email to Gizmodo, Saitta presented a long list of complaints, saying claims of more recent stable proteins (compared to DNA) have been challenged for a variety of reasons, including statistical shortcomings and lab contamination.

â€œNot only have other studies failed to provide corroborating evidence of these molecules, bone is known to actively attract microbial communities whose organic material can be mistaken as original,â€ said Saitta. â€œWe found, for example, that fossil bone is full of microbial DNA that can be stained using PI. PI cannot permeate cell membranes and so cannot be used as evidence for nucleus-bound DNA,â€ he said, pointing to 2019 eLife paper in which heâ€™s listed as first author.

In addition, Saitta said much doubt has been cast on histochemical and immunological staining as a technique to target specific molecules, saying these stains are notorious for producing false positives. He also worries that â€œmany of these supposedly miraculously preserved organic materialsâ€ are â€œmisidentified under microscopy,â€ saying we humans â€œhave a tendency to see patterns in non-patterned data.â€

Paleontologist Jakob Vinther from the School of Earth Sciences at the University of Bristol said a â€œparallel dimensionâ€ currently exists within the discipline in terms of how scientists are interpreting fossils and soft tissues.

â€œSchweitzer and a few others believe that proteins preserve readily, while archaeologists that are looking at material that are orders of magnitude younger cannot substantiate such claims of wholly intact proteins other than degraded fragments,â€ Vinther told Gizmodo. â€œArchaeologists use other methods, such as mass spectroscopy to investigate degraded proteins, which has led to some tremendous and amazing discoveries. However, every time people try and look at dinosaurs to sequence proteins, they find nothing but contamination. If [the authors] really have intact proteins, mass spectroscopy should easily enable us to confirm these radical claims.â€

Schweitzer, who is accustomed to the criticism, said sceptics â€œcan say what they want,â€ but they need to come up with other explanations that fit the data better.

â€œAs far as I know, DAPI and PI do not bind to any other molecule except DNA,â€ Schweitzer told Gizmodo. â€œWhat else is DNA-like enough to bind these two markers and be localised inside a cell-like structure if it isnâ€™t DNA? Still without sequence data, we can only say it is consistent with DNA. The fact that antibodies raised against collagen II bind this cartilage tissue, but do not bind adjacent bone is also pretty hard to explain unless it is cartilage, especially when all our controls are considered.â€

The debate rages on, as does the search for more evidence. Sadly (or perhaps encouragingly), weâ€™ll probably never be able to reconstruct a whole dinosaur genome and potentially bring an extinct dinosaur back to life, despite what science fiction tells us.

â€œIf the Jurassic World movies had more closely adhered to the science, perhaps they would not be so awful to watch,â€ Saitta told Gizmodo. â€œSimilarly, as scientists, we cannot get to a point in the future where our research papers are motivated by Hollywood.â€