I recently spotted on our “The Way Back” Facebook page the photo above showing a table mounted inside a car’s cupholder and on its automatic transmission shifter. I thought it was a joke, but it turns out, it’s called the “Mobile Office Pack,” and it was an actual factory option on late 1990s Fords in Australia.


I’ve been scouring the internet to learn as much as I can about the picture you see above, because the idea of a car company thinking there’s a demand for a plastic table that shoves into a car’s cupholders and sits on its transmission shifter amuses me to no end.

Among the first things I found in my search was an old article by now-MotorTrend-journalist Angus MacKenzie, who wrote in Wheels Magazine’s October 1998 edition about the launch of Australia’s then-new 1998 Ford Falcon, which represented the beginning of the “AU” series of Falcon and the end of the “E-Series.”

After lauding the vehicle’s lower seating position compared to its predecessor, its improved steering linearity, its hard-revving 4.0-litre inline-six engine, and its more comfortable ride, the reviewer mentioned the incredible plastic contraption with which I am now obsessed. From the story:

Ford is also offering an optional ‘Mobile Office Pack’ which includes a small table designed to fit over the automatic transmission holder and cupholder recess to form a stable working surface for your laptop computer or paperwork, a mobile phone holder in the centre armrest, extra 12 volt power outlet, and aimable front seat reading lamps.

The Mobile Office Pack — it’s real! To further confirm this, I discovered in a September 4, 1998 issue of the Sydney Morning Herald multiple mentions of this wacky plastic desk.

The first, found in the margin of a story written by John Carey about what differentiates the AU Falcon from its predecessors, calls the table a “Mobile office kit” and simply defines the marketing term as “a plastic work table for laptop computers.” The second reference, in Joshua Dowling’s story about the AU Falcon’s development and initial reception, discusses the device in further detail, pointing that it wasn’t available on the luxury Falcon variants (called Fairmont). From the story:

Curiously, Ford’s cleverly designed office pack (a plastic table which doubles as a workbench for lap-top computers for repos on the run) is not available as an option on the Fairmont range﻿. Ford reckons mainly sales reps will use this accessory. For safety reasons, the table can only be fitted when the car is in “park”.

(Incidentally, the story, and also MacKenzie’s writeup, both mention a mobile phone holder that folds into the centre console. That sounds, nifty, too.)

Confusion over whether this table was actually a real option has littered the internet, with a member of Australia’s Ford Forum creating a post with the title “Is this a genuine Ford accessory?”

In that thread is a response by one user claiming to have bought a Mobile Office Pack on the website for classifieds ads, Gumtree. Another user, a website moderator with the screen name “Raptor,” pasted into the thread something that reads a lot like an official Ford press release. It states that the option was only available on the base “Forte” Falcon AU and the more optioned-up “Futura.” From Raptor:

An integral part of the AU Falcon program has been the development of a wide range of factory and dealer fitted options and accessories.

The key advantage of factory or dealer fitted options is that customers avoid the risk of compromising the new car warranty, a risk which may arise with after market products. 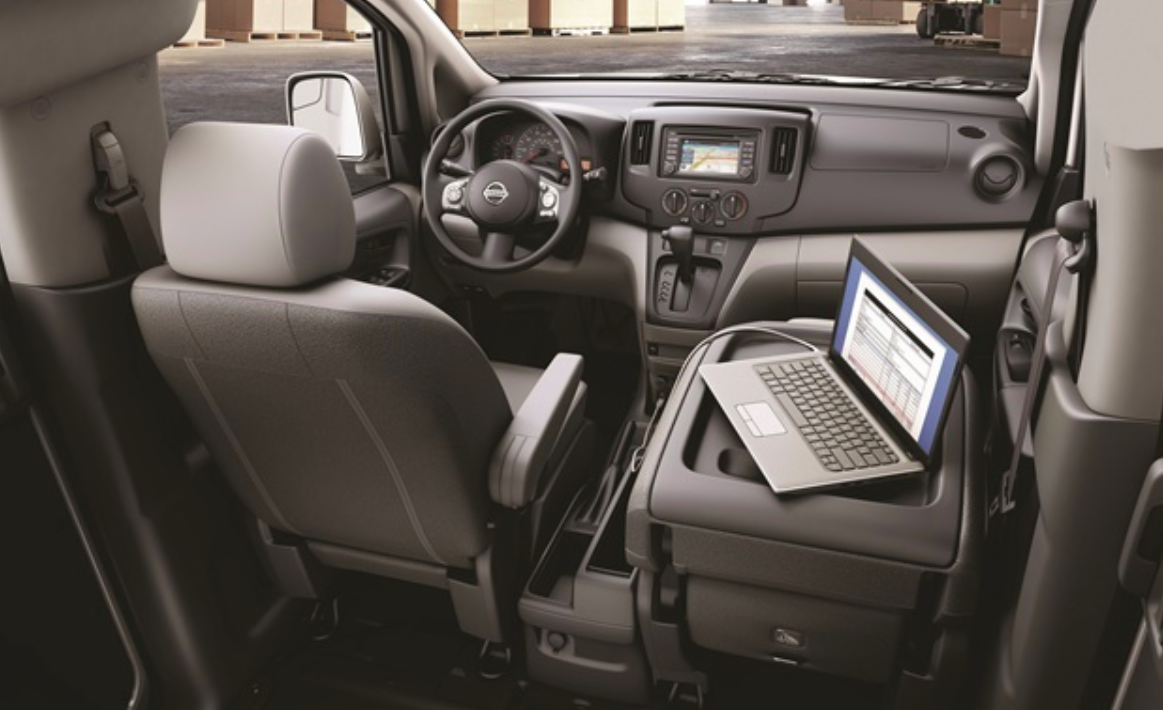 I’m not exactly sure why I’m so fascinated by this table. After all, the Falcon is not the only car to offer the driver a work surface on which to place a laptop (or in the case of the Ford, an old-school electronic organiser).

The Nissan NV200 shown above — and a number of other vehicles, really — offer a flat-folding passenger’s seat to act as a table. And it makes perfect sense, especially for sales reps, as the Sydney Morning Herald pointed out.

Still, compared to a flat-folding passenger’s seat, Ford’s execution was much more interesting. To use the Mobile Office Pack, you have to push the automatic shifter into park, empty your cupholders, grab the big piece of plastic from the trunk (or wherever you’re storing it), shove the table into the cupholders and place it on top of the shift lever.

It’s just so “out there” that I think it may actually be among the most ingenious automobile accessories I’ve ever seen. Though maybe “ingenious” isn’t the right word.