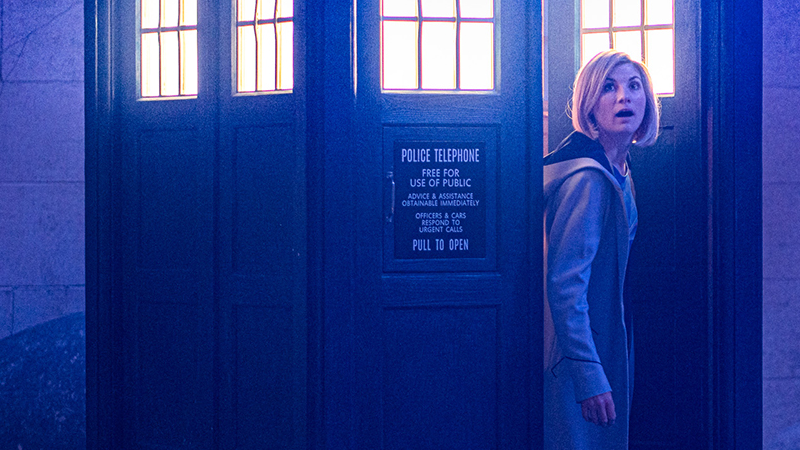 Last night’s Doctor Who was an existential deep dive into the power of human cooperation, of arsehole gods, of mental health, and of the importance of communication on all three of those fronts. Or, rather, it wanted to be. In trying to present a trippy lens into all those ideas, it tripped over a problem that’s recently become quite apparent for the show.

â€œCan You Hear Me?â€ has several parallels to last week’s environmentally inclined adventure, â€œPraxeus.â€ It, like the episode before it, wants to play with the large group that currently finds itself residing in the TARDIS by spreading them all out on solo adventures (well, this time more like solo vacations, as the Doctor drops her friends back in Sheffield for a quick check-in with their normal lives) before drawing them back together through a strange new threat. It also shares a desire to tackle important real-world themes, albeit in a general sense, placing mental health struggles at the heart of its disparate story threads just as last week honed in on microplastics pollution.

While this week’s episode also includes a threat with direct thematic connections to the wider thrust of the episode, â€œCan You Hear Me?â€ differs in that its connections feel more esoteric than they do oblique. The bird-borne virality in â€œPraxeusâ€ literally fed off of the microplastics permeating our planet and has parallels to this week’s threat”two chaos-loving immortal beings called Zellin (Ian Gelder) and Rakaya (Clare-Hope Ashitey ) who use their godlike powers and general boredom with being able to exist for eons to sow fear and trauma across the cosmos in order to sustain themselves.

But the nature of Zellin and Rakaya’s brand of chaos is less literal and more internalized, a framework the episode uses to often great visual effect, from the storybook presentation of the gods’ arrival in our plane of existence to how they mentally harangue our heroes, catapulting us through some truly chilling nightmares of Ryan, Yaz, and Graham’s deepest fears, all rooted in some very relatable realities. 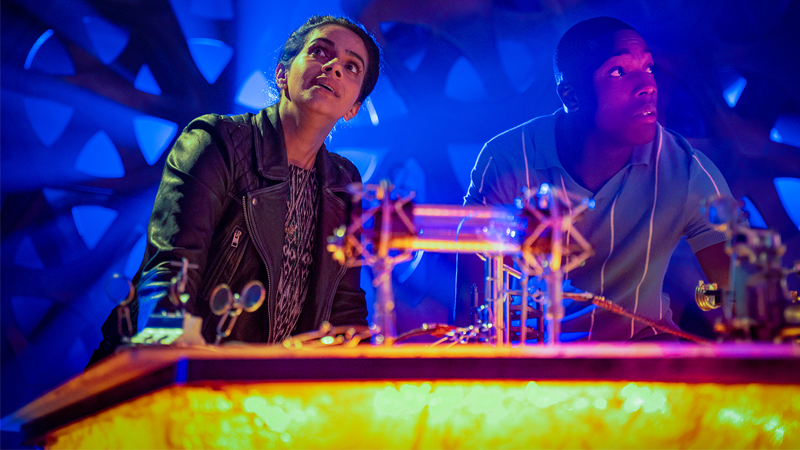 Yaz and Ryan are both surprisingly eager to spend some time outside of the TARDIS. (Image: BBC)

Sadly, the â€œPraxeusâ€ comparisons continued in less positive aspects, as well. Where this episode threatens to fall apart most is in its structure and the realisation that Doctor Who is regularly stretching itself thin to accommodate the perspective of three companions that, over a season-and-half into their TARDIS tenures, still feel like people we barely know.

Having to dedicate its opening half to team TARDIS separating from each other, coming face to face with the threat of the week”one that conveniently connects them all together in ways the script simply just brushes past in an attempt to get things rolling”and then coming back together again to confront it smacks of â€œPraxeusâ€’ own attempt to do the same. Only this time Doctor Who doesn’t at least leverage that to create a sense of increased scale or grandeur to the proceedings. Instead it just feels like muddled pacing, as we watch Ryan, Yaz, Graham, and the Doctor all have to come to the same conclusion, but are left to actually see why until all that’s clunkily gotten out of the way.

By the time the Doctor finally brings her friends together (as well as new friend Tahira, played by Aruhan Galieva, whose additional presence only further highlights the issues of having too many companions in the mix, temporary or otherwise), the episode has to come to a screeching halt again. Face to face”or creepy separating nightmare finger to creepy separating nightmare finger”with Zellin, the brakes are slammed as, one after the other, we see each member of Team TARDIS’ nightmares preyed on so Zellin can free his partner from her imprisonment. 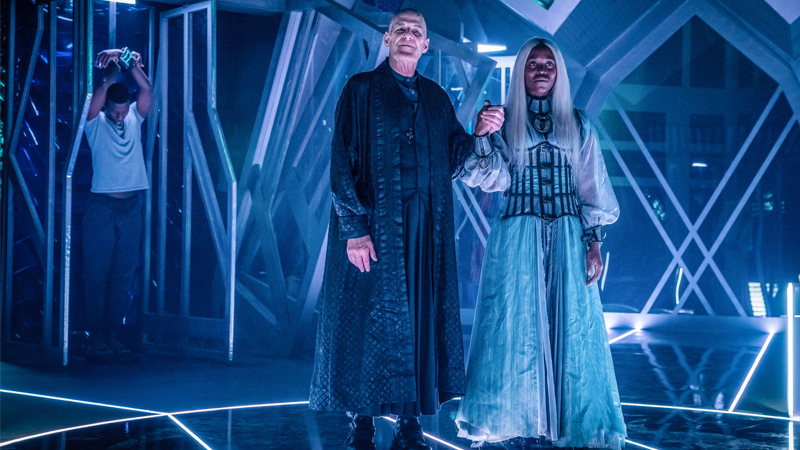 At least this time it does so to navigate some interesting backstory for our companions. As Zellin’s bizarro-fingers plumb the depths of their minds, Doctor Who gets dreamy in a way it really hasn’t since last season’s beautifully surreal â€œIt Takes You Away,â€ albeit with a much darker bent. The Doctor’s nightmare is arguably the least intriguing of all, another mysterious tease for the â€œTimeless Childâ€ subplot simmering away throughout the season. But Ryan, Yaz, and Graham’s nightmares all speak to lingering fears and truths that have been eating away at them unspoken until Zellin’s torment brings them to the fore.

Ryan, isolated since the death of Grace and his distant father’s attempts to reconnect, still fears the real possibility of his adventures in Time and Space irrevocably undoing his friendships back in Sheffield, connections to people he needs as much as they need their connections to him for their own mental health.

Yaz, several years on from high school bullying that pushed her to run away from home and nearly to far more dangerous brinks, is forced to confront a twisted version of the police officer whose outreach ultimately helped pull her back from that brink. Graham, perhaps most cruelly of all, faces a twofold horror: not just a surprise return from Sharon D. Clarke as a specter of Grace needling him over his ability to save her, but a lingering fear that his cancer might one day return, and without her there to support him, the possibility that this time he may not endure it. 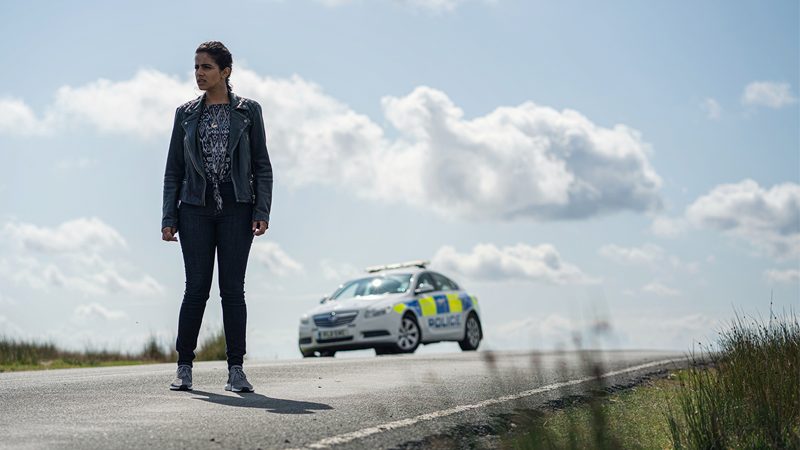 These are all excellent vignettes for these characters, but dumped out one after the other”connected by ink-wash style fadeaways as we jump from one captive mind to another”they’re robbed of some of their emotional impact. These all feel like important aspects of these characters’ lives, like they should inform their arcs over the course of a season, but they’re just jotted out one after the other like a peculiar checklist because the episode started with separating our companions for their own individual little arcs, and now they have to be continued at the expense of the larger whole. All while the audience is left to wonder what the hell Zellin and Rakaya are up to when their eyes turn to Earth as the next site of their chaotic games (the answer, it turns out, is to… walk up and down a dark Sheffield suburban street for a bit?).

When Companion Trauma Time is over and the moment comes for Zellin and Rakaya to ultimately be defeated in the episode’s climax, the time spent navigating those myriad dreamscapes means everything rushes to a distinctly aimless conclusion. The overarching message is a noble one”as the Doctor notes, humanity finds the strength to overcome its fears and traumas in speaking out about them with others, in a sense of unity and community that, as eternal and distanced immortals, Zellin and Rakaya could never understand themselves. But because it takes so much time to get to that point, it’s quickly doled out in a little speech from the Doctor before she can conveniently do some sonic-screwdriver handwaving and zap the two eternals back into the prison Rakaya had been sealed away in in the first place.

And then, just as suddenly, the episode has to end, its commentary on mental health issues indelicately blunted as it once again has to re-iterate those points three times over to wrap up Ryan, Yaz, and Graham’s arcs over the episode with satisfying conclusions. Or, at least two of those arcs, as we’ll discuss in a bit. 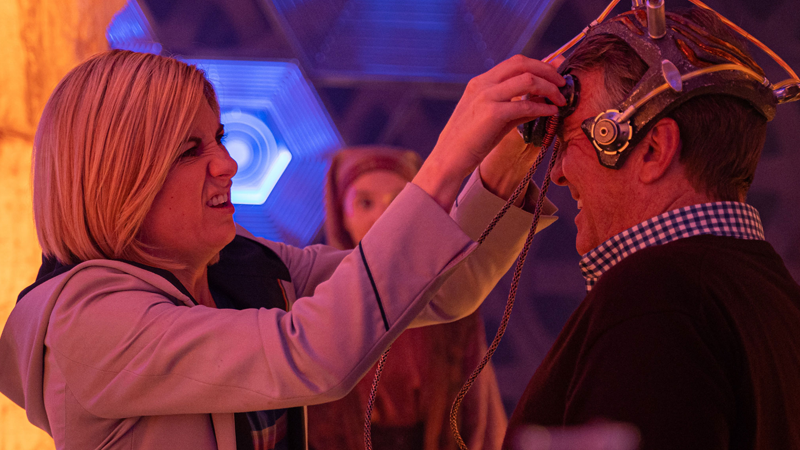 Having such a large group of primary characters like this has always necessitated a fine balance for Doctor Who, one that this iteration of the show and this particular iteration of the TARDIS â€œfamâ€ has less-than-gracefully navigated from the get-go. Last season’s focus on Ryan and Graham’s relationship came at the expense of giving Yaz a satisfying arc, while this season’s attempts to remedy that have often clashed withÂ individual episode’s pacing and structure, leading to rushed and unsatisfying conclusions. They all ultimately speak to a show that realises the potential of having all these different voices in the TARDIS together, but not actually being able to do something with that potential. The longer it seems to squander it, the more episodes like â€œPraxeusâ€ and â€œCan You Hear Me?â€ feel like they’re common”interesting ideas that are left feeling half-explored by a need to accommodate one (or two) few many cooks at the TARDIS console.