All Photos By Ken Saito

The Tokyo Auto Salon is the epitome of the contemporary Japanese tuning scene, showcasing the very best and latest from Japan’s aftermarket brands and what the trends for the rest of the year will be. But, unlike in more recent years, TAS2020 had a couple of surprises up its sleeve.

Roberuta is an air suspension company popular among supercar owners in Japan retrofitting a lift system to older exotics that might not have had the option in the past. For example, they’ve installed lift systems for the Porsche Carrera GT, Ferrari F40, and Maserati MC12. They usually have some cool cars on display every year, including last year when they had two Koenig Specials Ferrari Testarossas. This year, thanks in part to Katsuji Tachi they had a pair of super special cars which quickly became the highlight of TAS2020 for me. Perhaps that was because they were from the ‘90s. 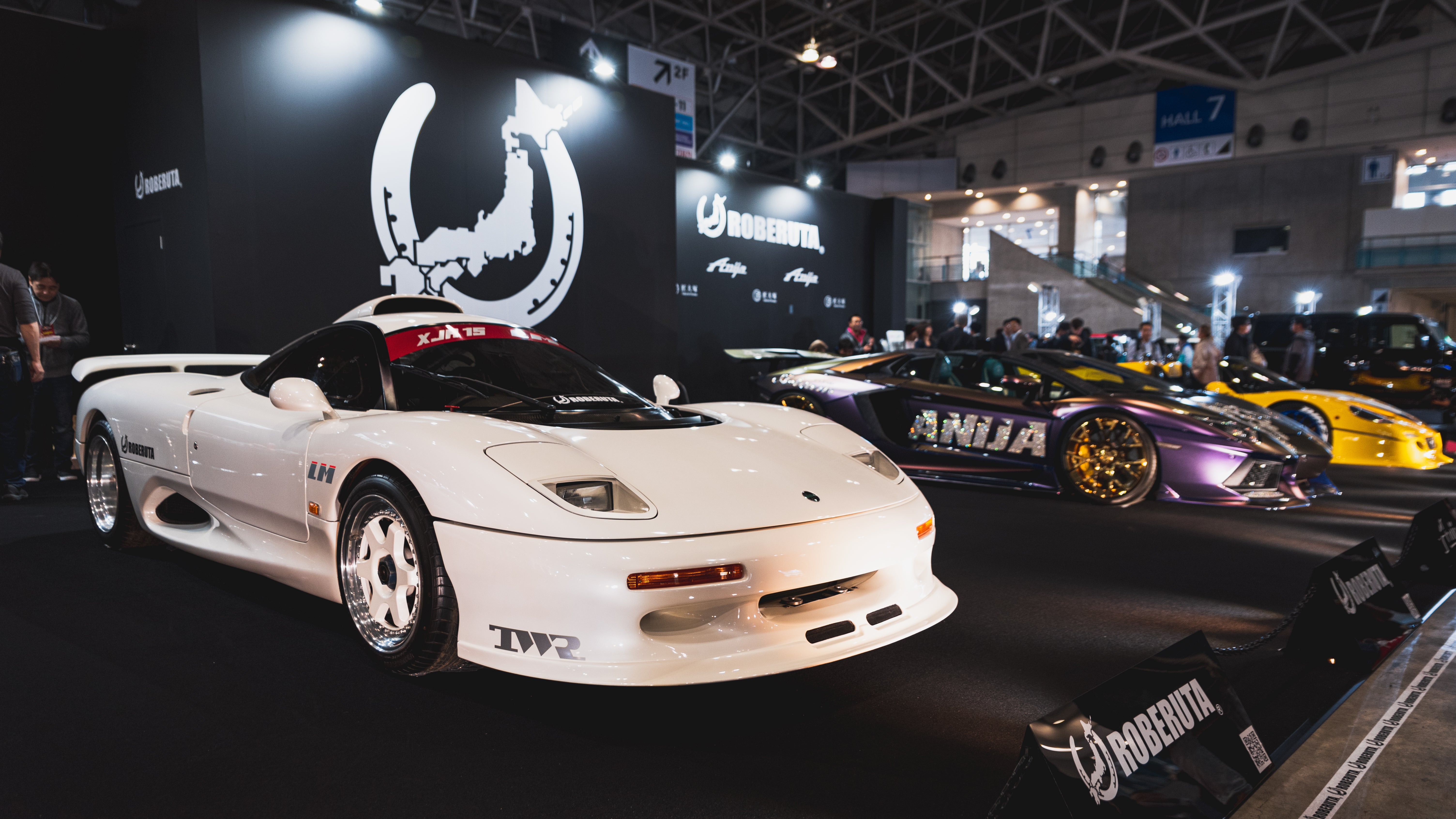 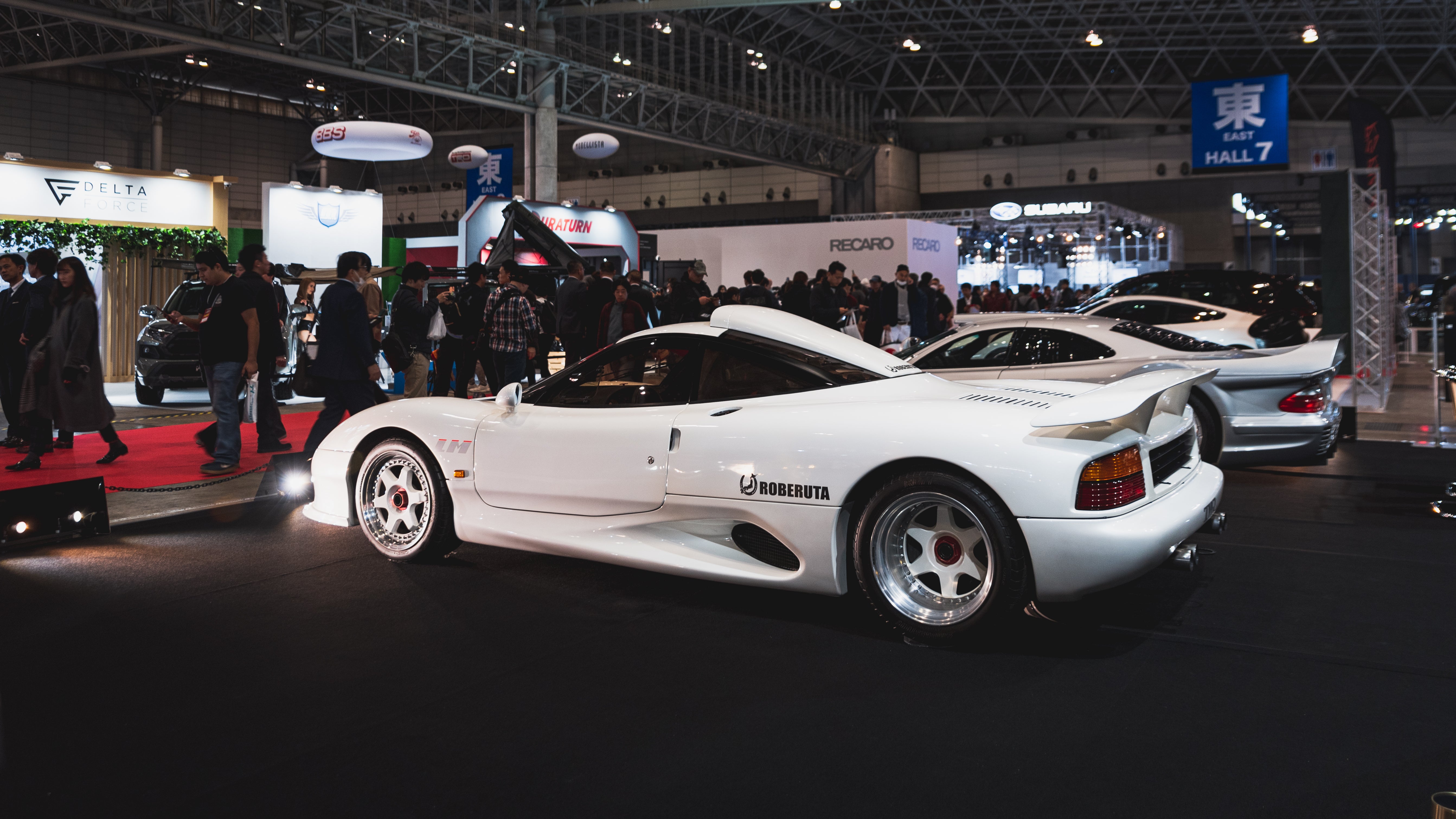 It’s not often you go to a tuner show and see a Mercedes-Benz CLK GTR (number 11 of 25) and a Jaguar XJR-15 LM, just one of five ever made. Both the broker in question and my source Roddy told me both cars are owned by Tachi, a Japanese businessman who’s had the XJR-15 LM since new and infamously bought two dozen Lamborghini Countach 25th Anniversaries at the peak of the bubble as investments. When the bubble popped, as Roddy and the broker told me, he forced the dealers he bought them from to buy them back at the original price he paid.

Regardless, we have to thank Tachi for displaying the XJR-15 LM because this was the first time these cars have been on display to the public. A car that was originally built in 1992 made its first public debut 28 years after it was built. The story behind the XJR-15 LM is one of crazy excess, myth, and mystery. It wouldn’t be an overstatement to call this car a “unicorn.”

To find out more about the XJR-15 LM I turned to Jordan Roddy from Bespoke Motor Cars based out of Melbourne, Australia. Jordan flew all the way to Tokyo just to see this unicorn in the metal then flew straight back. He’s spent most of his life obsessing over the XJR-15s and few people in the world are as knowledgable about these cars as him. He is the XJR-15 guy. 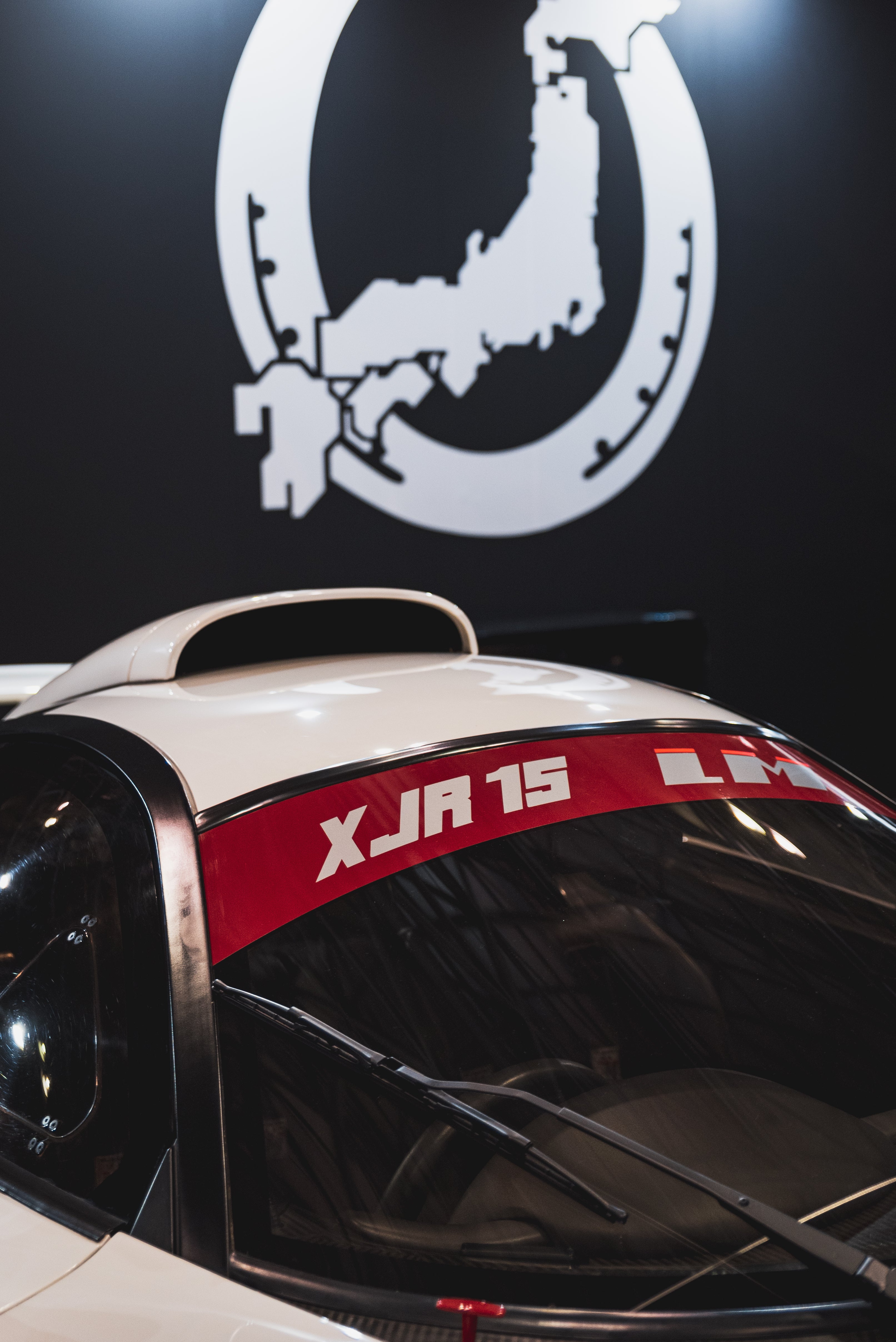 According to Roddy, the LMs were made in secrecy. The idea was born out of a nightclub in Tokyo when senior representatives from the Special Vehicle Operations from Tom Walkinshaw Racing were invited to Tokyo to meet with Tachi and his reps to talk about buying more XJR-15s. For context, Tachi had already purchased a couple of XJR-15 road cars prior to this meeting. At the time, Japanese supercar buyers were buying dozens of Ferrari F40s at a time as investments.

TWR and Tachi agreed on five additional cars beyond the original 53 or so road cars. Tachi wanted these five extra cars to be a bit more special, so to sweeten the deal the TWR reps toyed with the idea of putting the 7.0-litre V12 engine from the 1990 Le Mans winning XJR-12 LM Group C car into these five special XJR-15s. Think of them as a “celebration edition.” TWR ended up using the 1991-spec LM 7.4-litre V12 engine, thus the XJR-15 LM was born.

The Group C engine and the road car’s 6.0-litre engine have no common parts; the engine block, head, pistons, rods, everything was unique to the LM. Roddy reckons less than 10% of parts are transferrable between the road car and the LM. It was just a matter of getting the racecar engine and shoving it into five chassis originally destined to be road cars.

There were no modifications to make the Le Mans engine more usable for street use. Since it was just a pure racecar engine designed to run the 24 Hours of Le Mans and not to take to the shops, the engines only have a lifespan of around 6,000 kilometres. No surprise then the only time these cars have run was when they were being tested at Silverstone. As far as we know, with the exception of one of the blue cars, these LMs were never driven on the street. 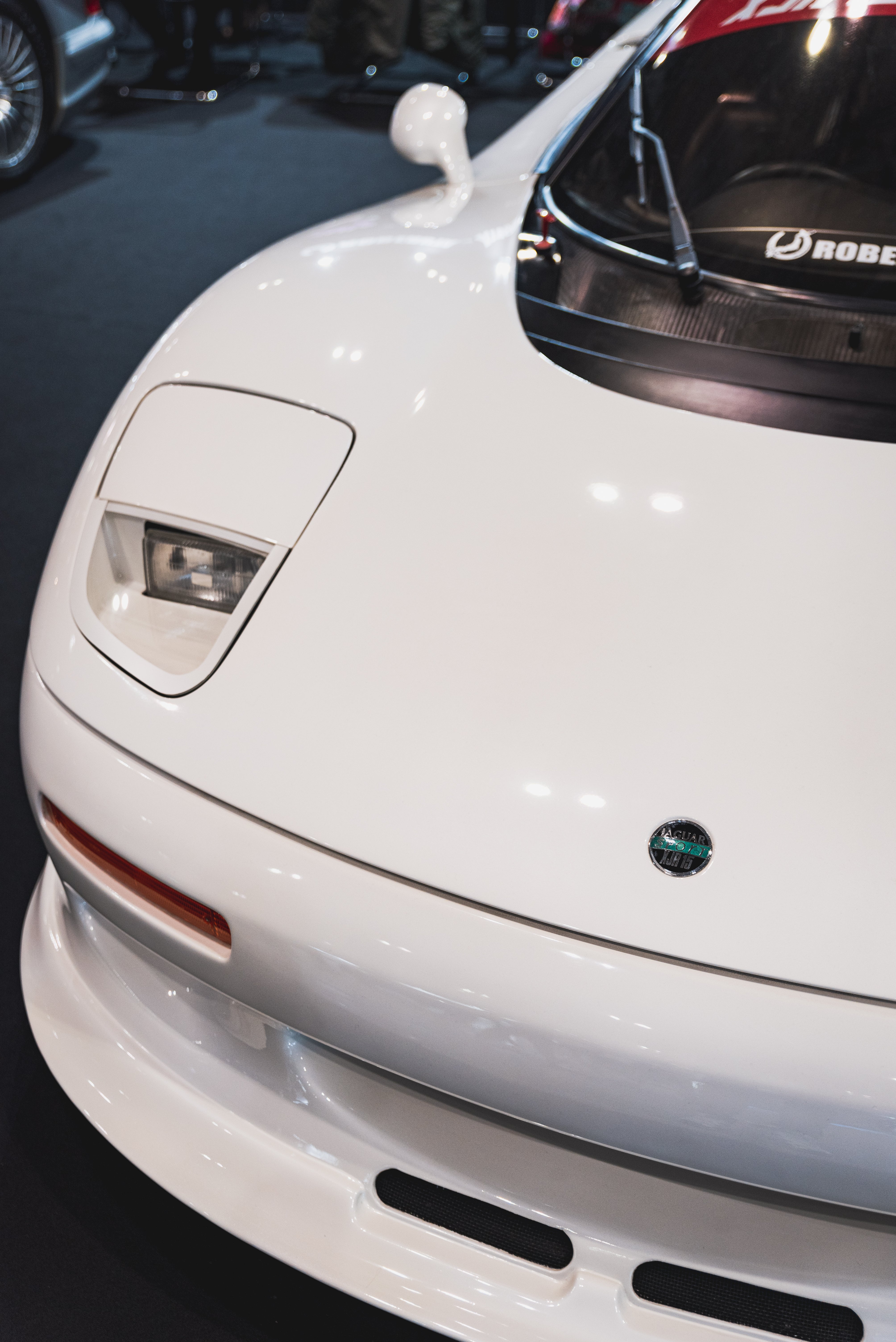 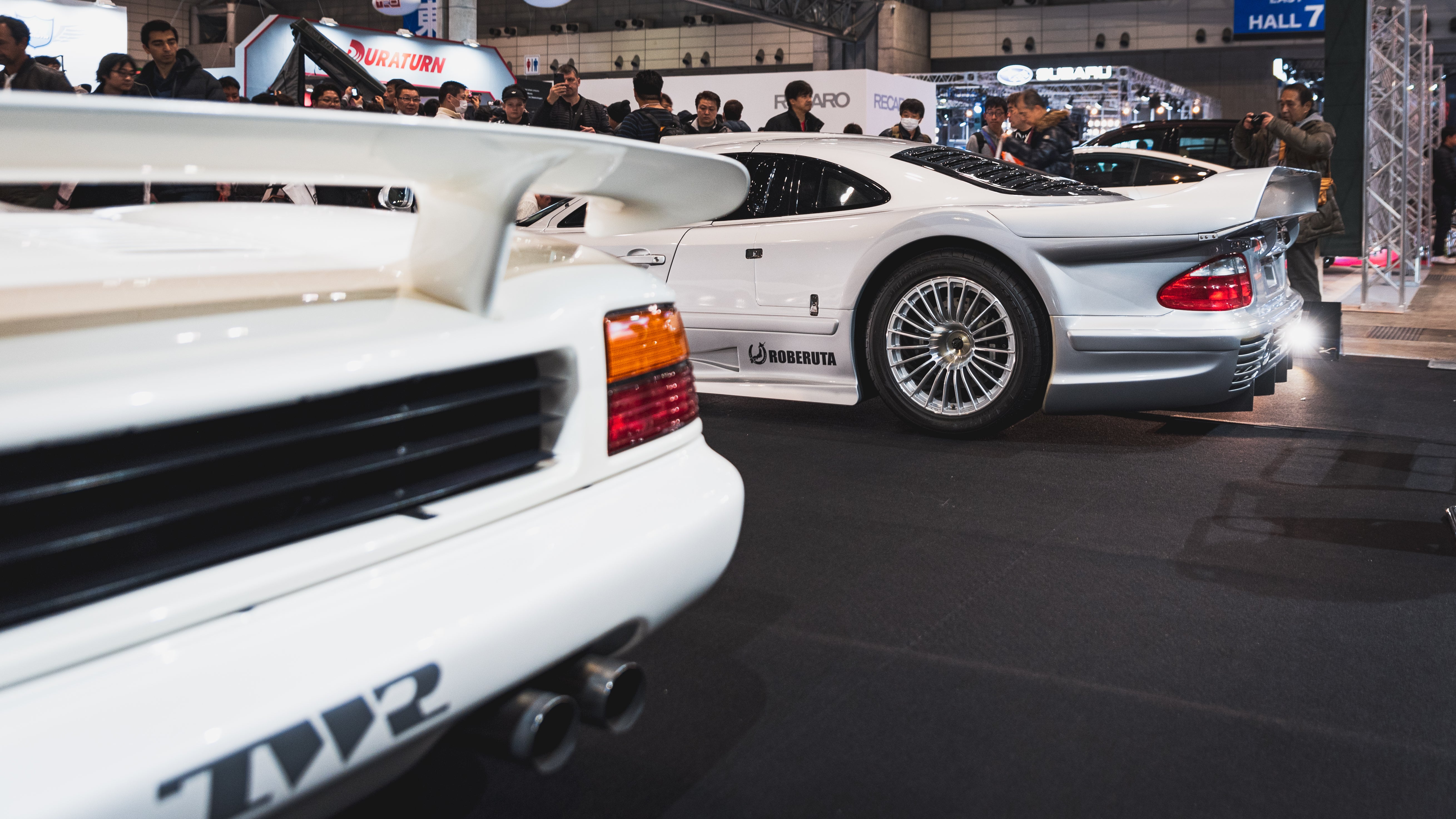 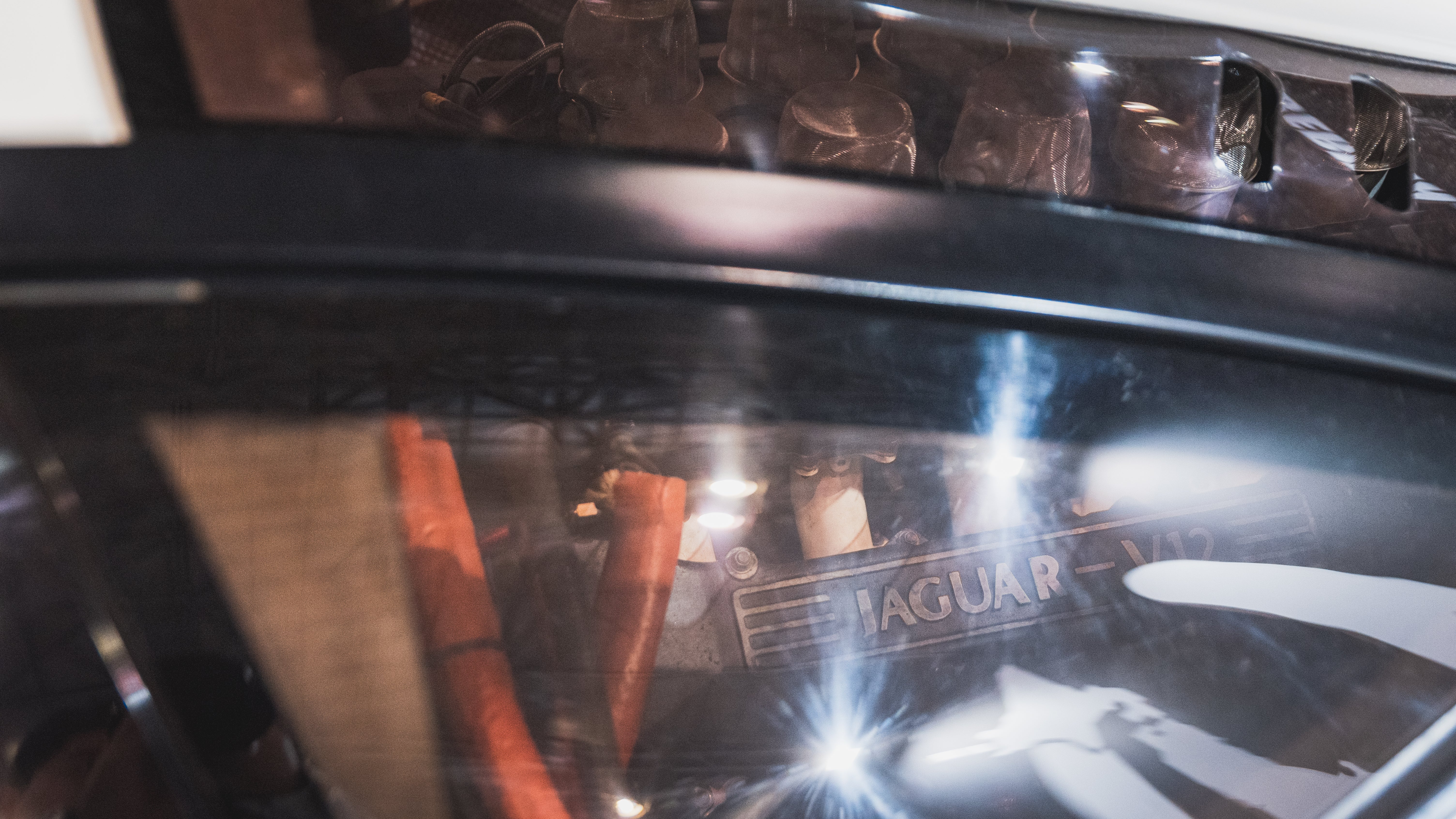 Should you be lucky enough to see one on the street, how can you differentiate it from the standard road car? TWR added a bigger chin spoiler upfront and a larger wing (2.5 inches taller) at the rear. If you’re still unsure then you could go by the massive roof scope which was a necessity to let the Group C engine breathe. It’s there completely for function, the fact that it looks absolutely unhinged is just a bonus. Inside, it’s largely unchanged. bar a few LM badges on bits and pieces here and there.

The crazy thing is not much else is known about these cars. Roddy said he knows most of the senior members from TWR involved in this project but even they can’t remember the specific details. When TWR went bankrupt in 2002 all the paperwork and documentation related to the LM was lost. The common belief is five LMs were made and all delivered to Japan with two in blue, two in green, and chassis 001 in white. The white car was displayed in a dark showroom in the centre of Takasaki City in Gunma Prefecture, three hours northwest of Tokyo, for a couple of years alongside the CLK GTR but were never in the public eye. 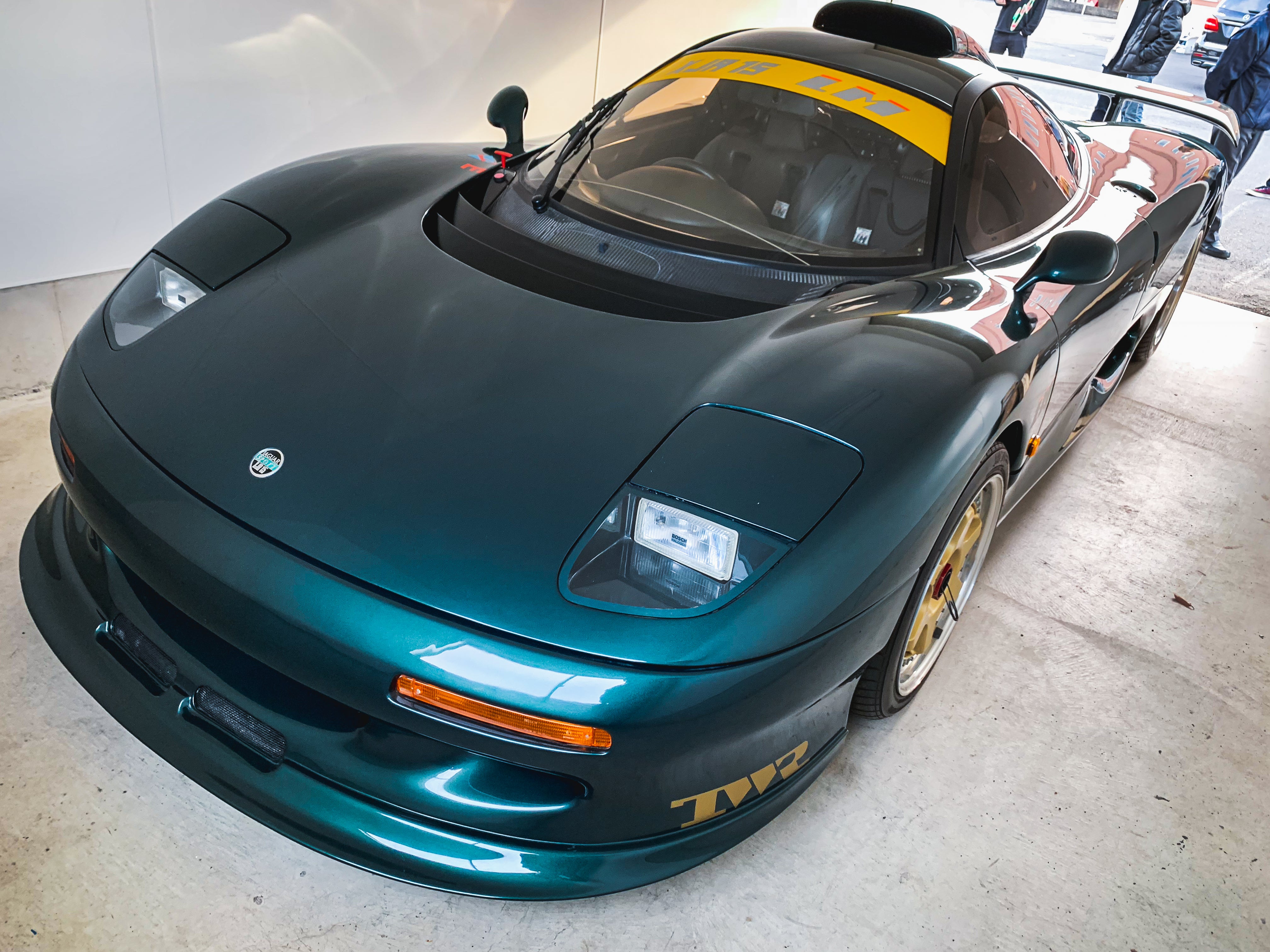 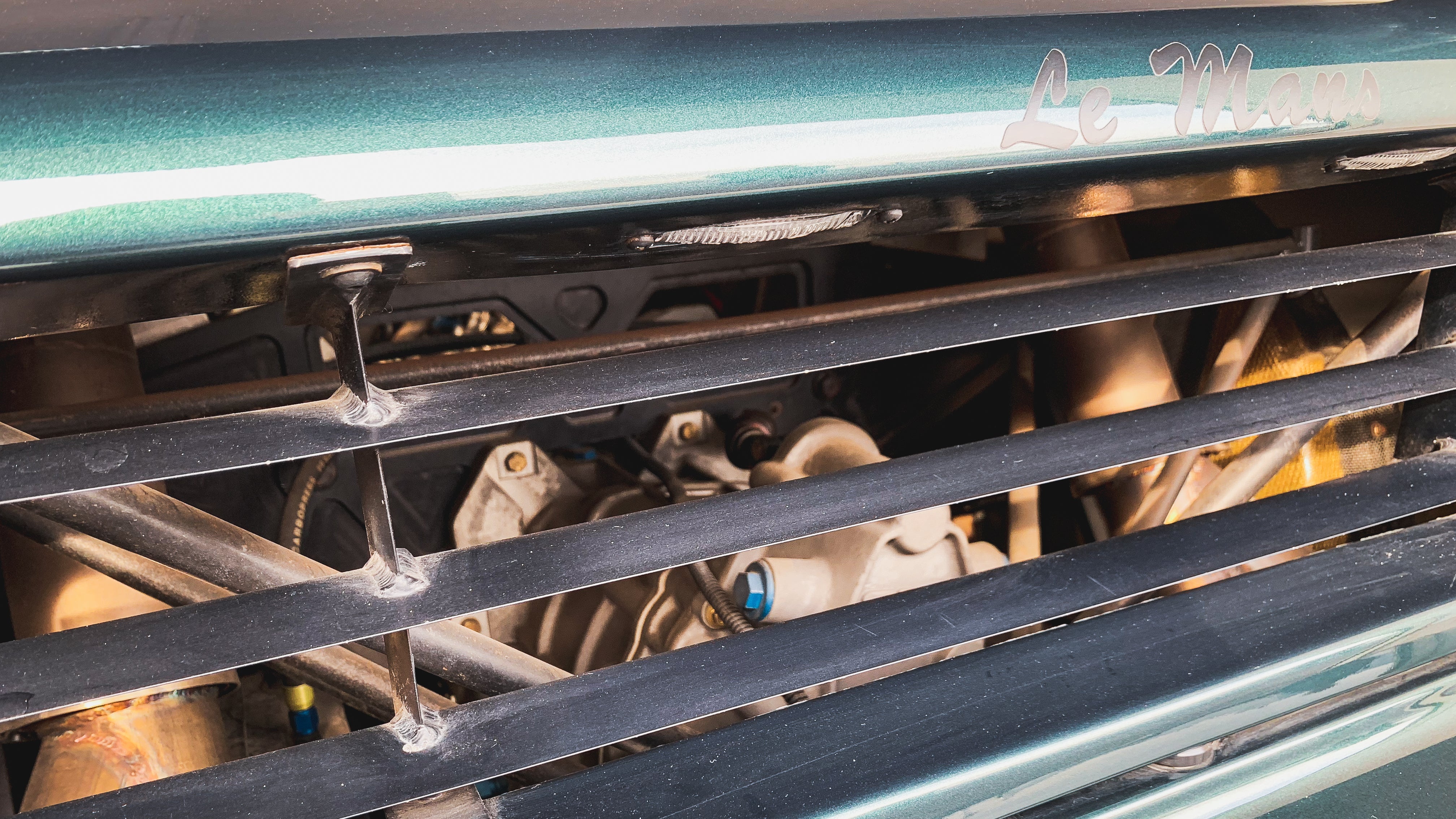 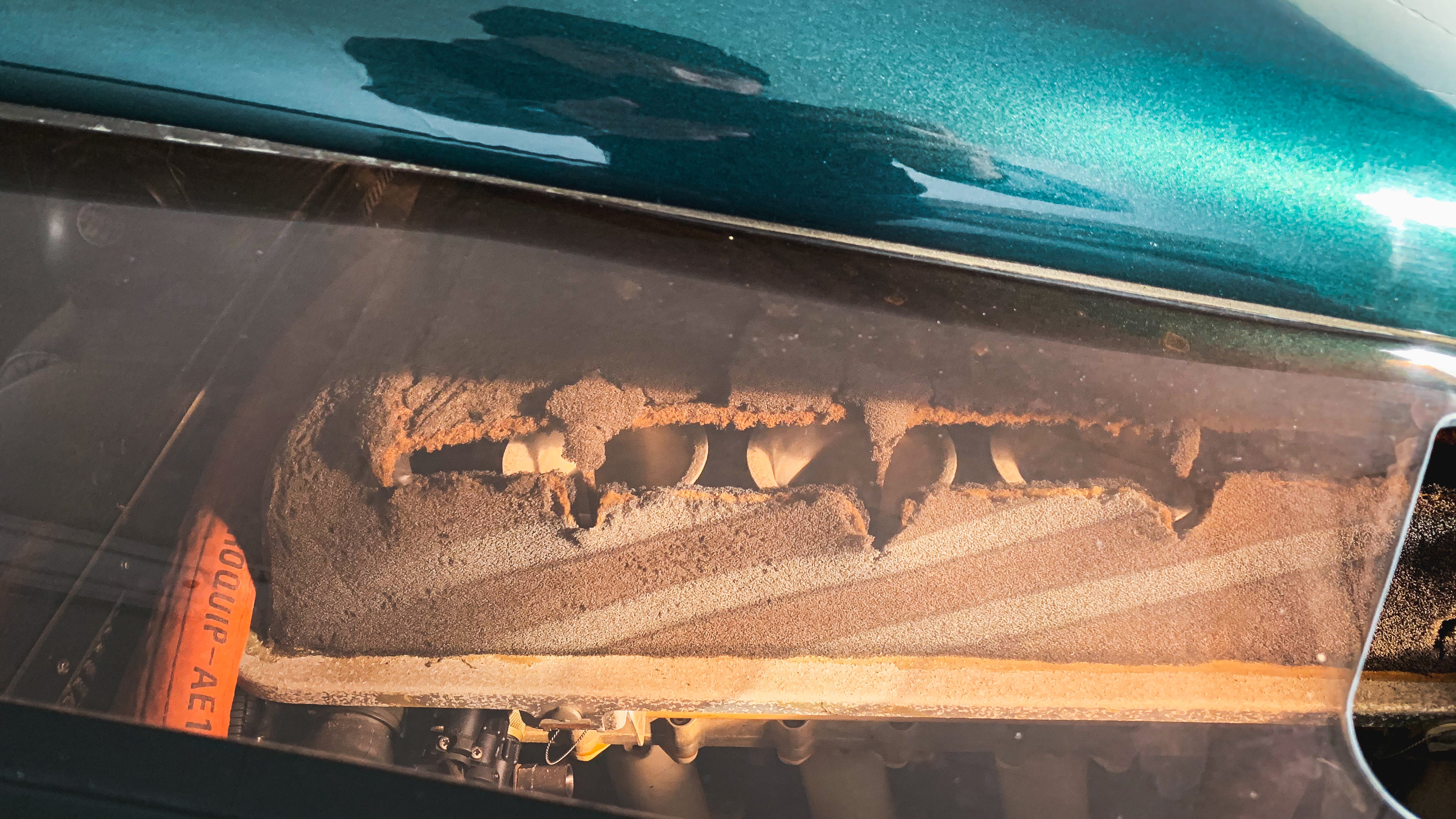 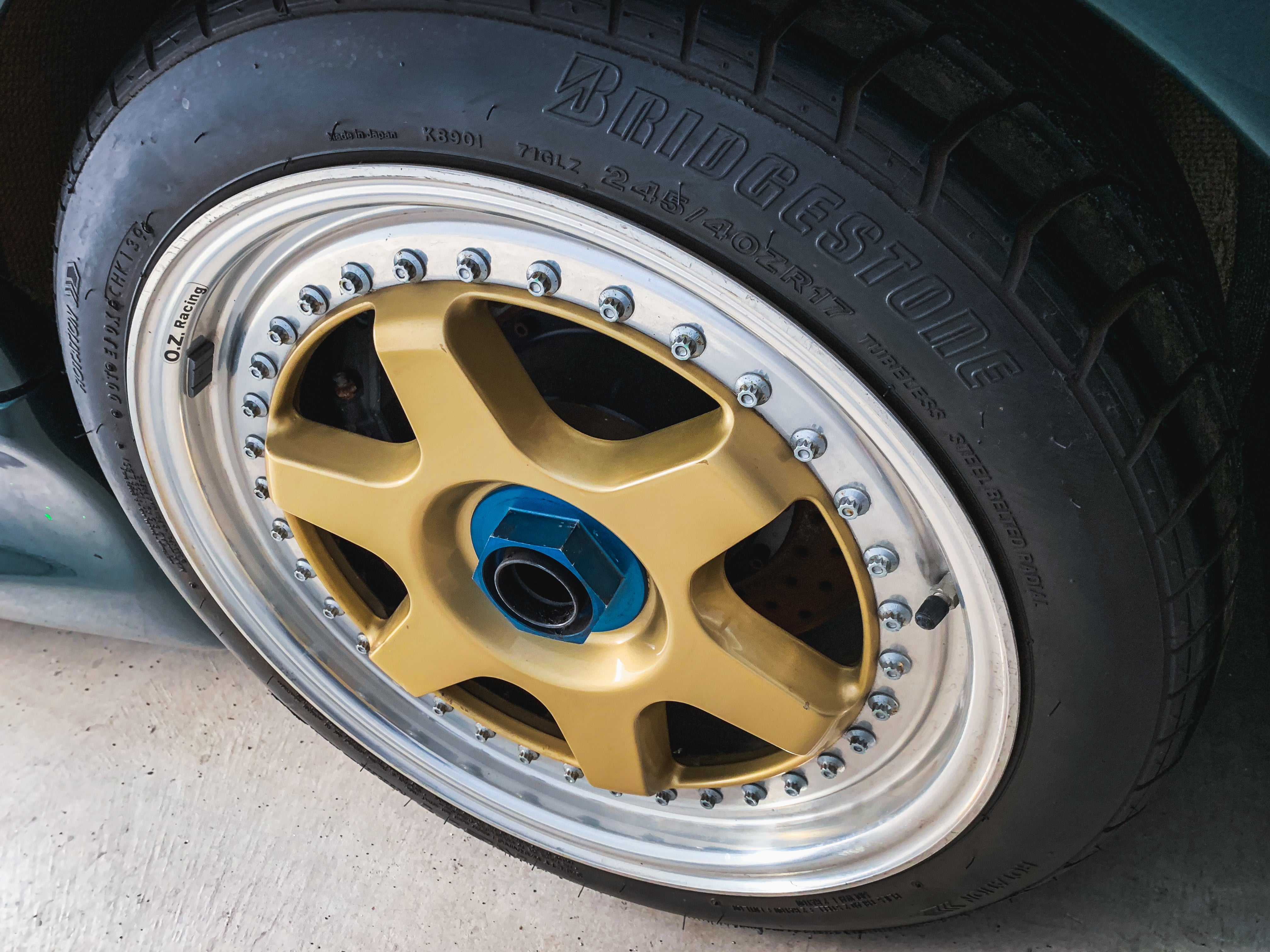 According to a local broker who’s familiar with these cars, the green cars were moved through a couple of dealers a few years ago but were always kept a secret. It was around this time when I stumbled upon one of the green cars while it was in the hands of a dealership in Tochigi, two hours north of Tokyo. The state of the car looked abysmal; it looked like a car that hadn’t moved in two decades. It didn’t even look like it was in running order, nor did the white car at TAS. That car had to be pushed on to a transport truck to leave the show. I imagine the other LM cars are in similar states. Which is even sadder now knowing the history and the origins of its engine. The dealers eventually gave up trying to sell the cars after Tachi made “too many unreasonable” demands on his end. Given his past reputation with the Countach Anniversaries, he decided to withdraw from selling to dealers.

Luckily, the LMs are now being looked after by caretakers who have convinced Tachi to show the LM to the public. Roddy reckons the reason why it took 28 years for the LM to make its first official public appearance is because the “XJR-15 narrative is becoming louder.” The values of XJR-15s have increased in the last couple of years and now’s the perfect time to show a car that people might be able to fully appreciate. (A special thank you to Jordan Roddy)