Building a PC is scary. There are cables that need to be plugged in, processors that needed to be seated just so, and a whole hodgepodge of components that need to be selected, tested, and carefully installed to get the thing running. One screw up can be costly. The Razer Tomahawk aims to take a huge chunk of the hassle out of building a PC and make the process practically foolproof.

The Tomahawk is possible thanks to Intel, which has a new version of its popular NUC available this year. NUCs are very compact computers produced by Intel. They typically require a little more experience to set up—they have zero software pre-installed—but they’re usually great for tinkering, building a Windows Media Centre, or just levelling up from a Raspberry Pi.

Only, in the last couple of years, NUCs have started shifting into more full-fledged computers instead of a mere tinkerer’s delight. The latest NUC is arriving in a few different designs, including one where the motherboard, CPU, RAM, and storage are all put on a single PCI-E card. Which makes them perfect for people looking to build their own PC.

First, you pick the NUC you’d prefer, detailing RAM (up to 64GB of DDR4), storage capacity, and which 9th-gen processor from Intel (up to an i9) you want. Then you choose your GPU (up to a Nvidia RTX 2080 Super), plug both into the available PCI-E slots in the case, and plug in the power cables coming out of the accompanying power supply. Slot it all into place and you’re done. As shown in the GIF below, it takes 30 seconds or less depending on the case.

It’s clearly a lot easier than building a whole-arse PC. Though there are limitations. When I build a PC, I get to fastidiously choose every component, from the fans to the brand of SSD. Razer’s solution isn’t nearly as customisable.

Yet I think a lot of people won’t care—especially people eager to get into PC gaming but reluctant to learn about every element of the machine they’re playing on. Instead of worrying about storage, RAM, or processor, those of you who just want to get on with it could just buy the whole kit and then spend your energy worrying about the GPU—perhaps the most crucial component in a gaming PC. 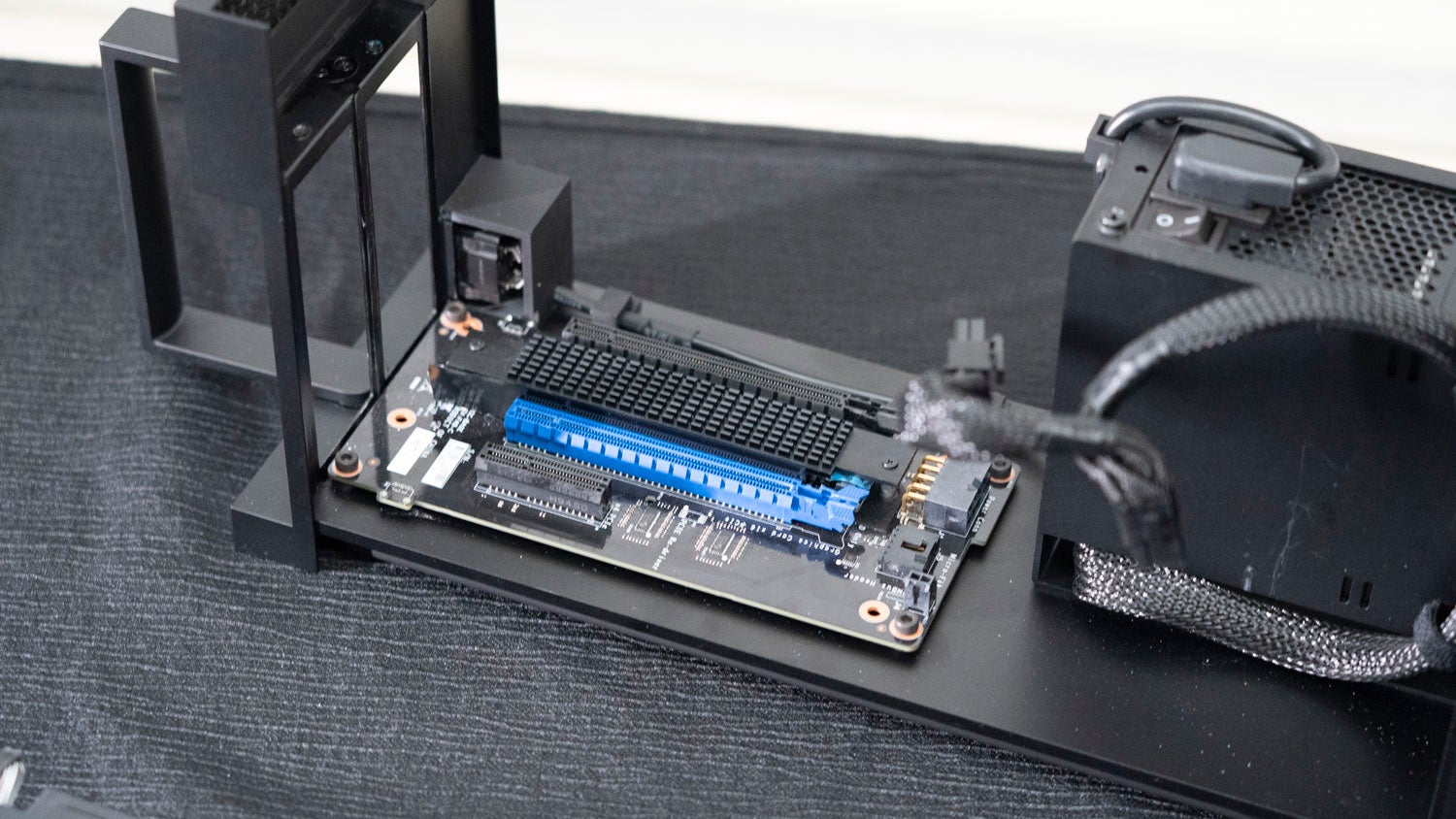 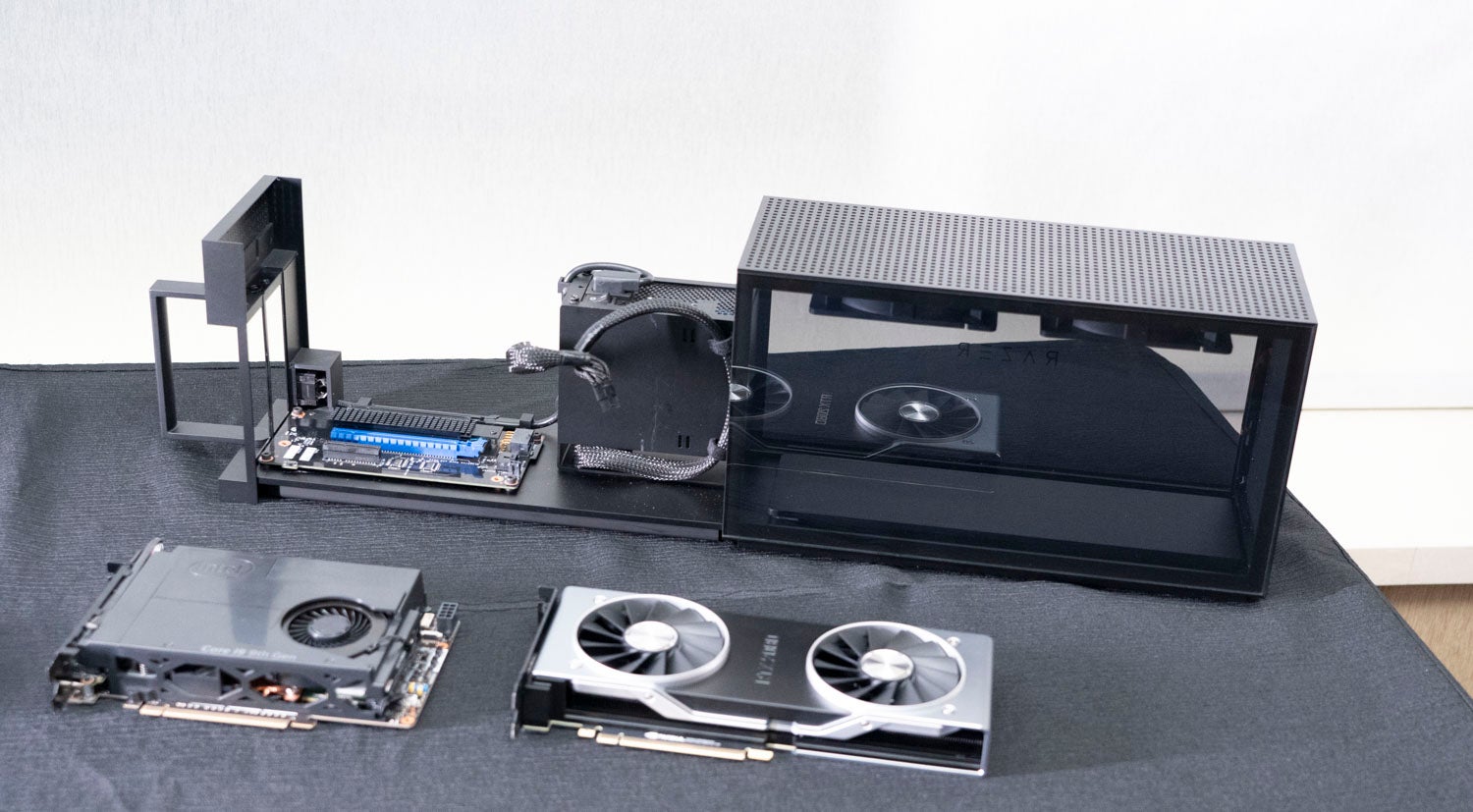 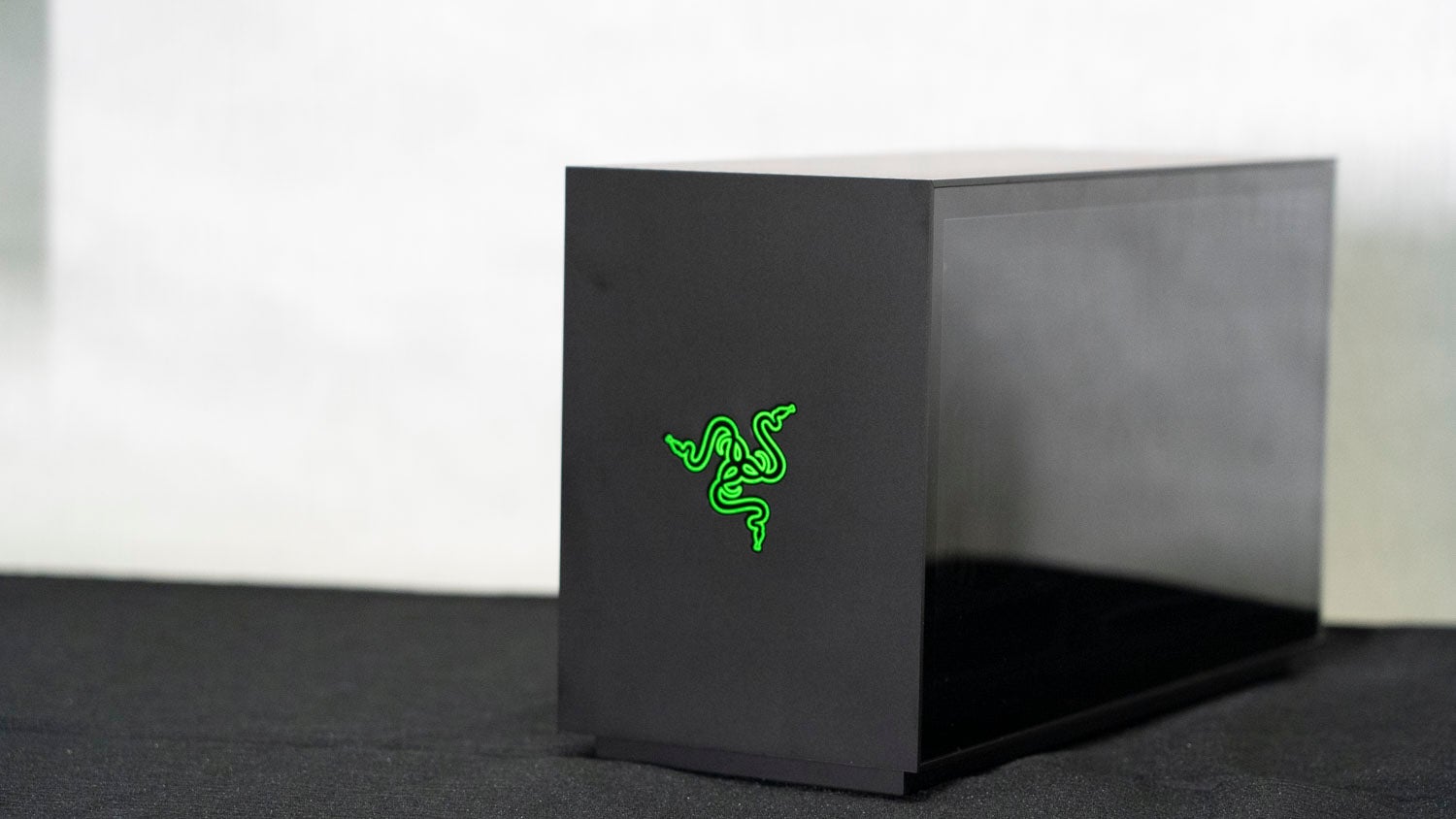 Razer also claims that many of the components, including the SSD, RAM, and fans) in the NUC will be user upgradable. So if you’re initially nervous about upgrading, you can take your time, upgrading piecemeal as you learn the system.

The Tomahawk seems like a potentially affordable half step between the fully built PCs you can buy from places like Alienware or Maingear, and the super customisable ones you can build yourself. But how affordable remains to be seen—Razer isn’t discussing price yet.

Intel is also pretty quiet on pricing. While Razer has turned the NUC into a super-cool full PC attached to a PCI-E card, Intel’s also releasing a more traditional NUC.

Sunday evening, Intel showed off its own Ghost Canyon NUC. While most NUCs tend to be the size of a Roku box, the Ghost Canyon is large enough that it can include a PCI-E slot for adding one’s own GPU, effectively turning it into a gaming PC even smaller than those that rely on a micro ITX motherboard.

That being said, judging by the size of the case, a Nvidia RTX 2080Ti and other longer GPUs won’t fit. You’ll need something smaller (and less powerful) to pair with the 9th-gen i9 processor inside.

As with Razer, Intel isn’t discussing pricing yet. Both products are expected to ship later this year, and we will review them as soon as we can.