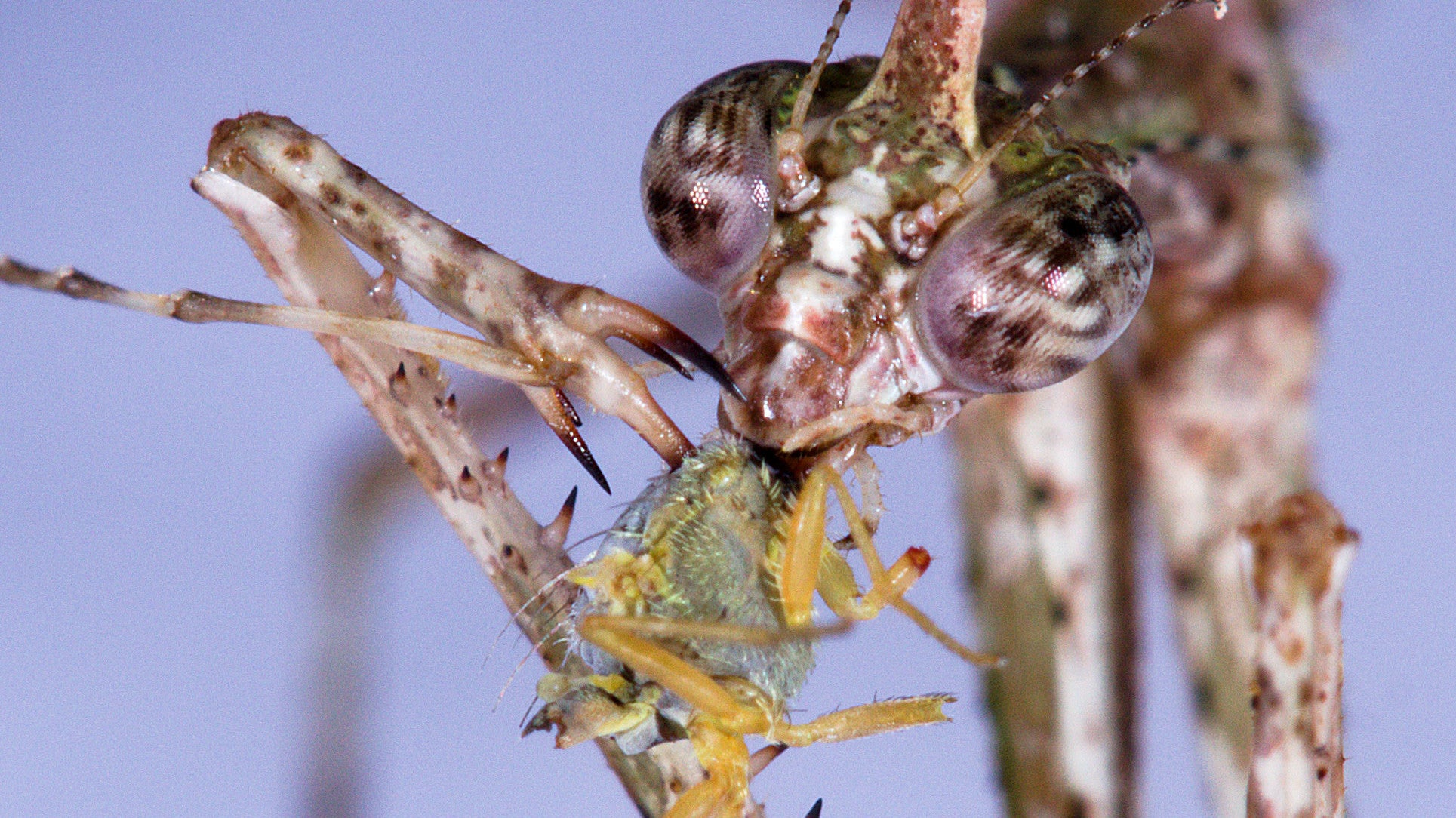 Mantises are elite ambush predators, snatching their victims with a lightning-fast strike of their front limbs. But one newly described species doesn’t just hold its prey in a prickly embrace: It impales it, using long, barbed tines to expertly polish off the squirming morsel like a chunk of bread skewered on a fondue fork.

The new mantis hails from the highland tropical rainforest of central Peru, where the species has undoubtedly lived for eons. But it’s just in recent years that Julio Rivera, an entomologist at St. Ignatius of Loyola University in Lima, has been studying with the insects. Having first come across a male of the species roughly two decades ago, Rivera eventually acquired a live female and began rearing the miniature hunters in his lab, offering them kokedama plants as habitats.

Careful examination of the mantises’ physical features suggested that this species was distinct from its close relatives. Rivera and a colleague introduced the creature—Carrikerella simpira—to science for the first time in a paper published last month in the journal Neotropical Entomology.

This mantis is slender and tiny, about half the length of your thumb. Mottled with grays and greens, the mantis closely mimics the tree trunk lichen of its rainforest home, where it patiently waits among the fungal thicket. 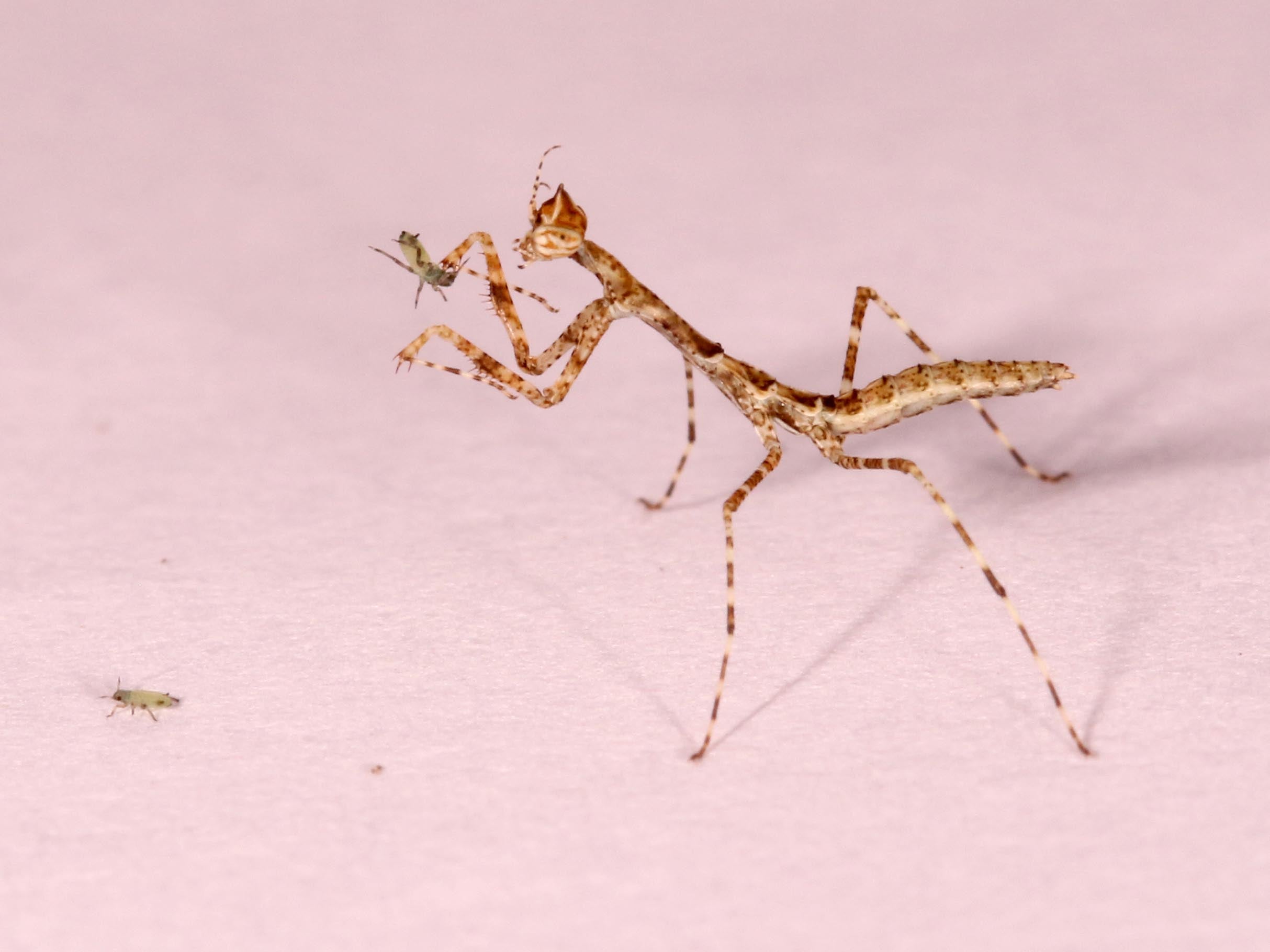 But while observing one of the little predators hunting on its kokedama plant one day, Rivera realised this unassuming creature didn’t hunt like other mantises.

“What I actually saw was a mantis failing at catching a fly,” recounts Rivera. “The mantis missed the prey and then just pierced through the tissue of the plant, and it got tangled.”

With some effort, Rivera says, the mantis eventually freed its spiky forelegs from the plant. But it wasn’t long before he saw mantises succeed, striking out and straight up to spear their dinner on a row of thorns. A closer look at those wicked, forward-facing spines revealed their edges lined with barbs, perfect for gripping impaled victims.

Carnivorous insects catch their prey using a wide array of tricks, but until now, the supersonic shish kabob had never been documented. Carrikerella simpira appears to be the first insect known to impale its prey with its legs, and among all arthropods, it’s a strategy only shared with some mantis shrimps, which are unrelated crustaceans.

Whipping hydraulic tridents around like this appears to be an adaptation to life among rainforest moss and lichen. The habitat is rife with teensy (and fast) soft-bodied invertebrates like springtails and mites. To Carrikerella simpira, the world is a Costco, and the free samples never stop flowing. 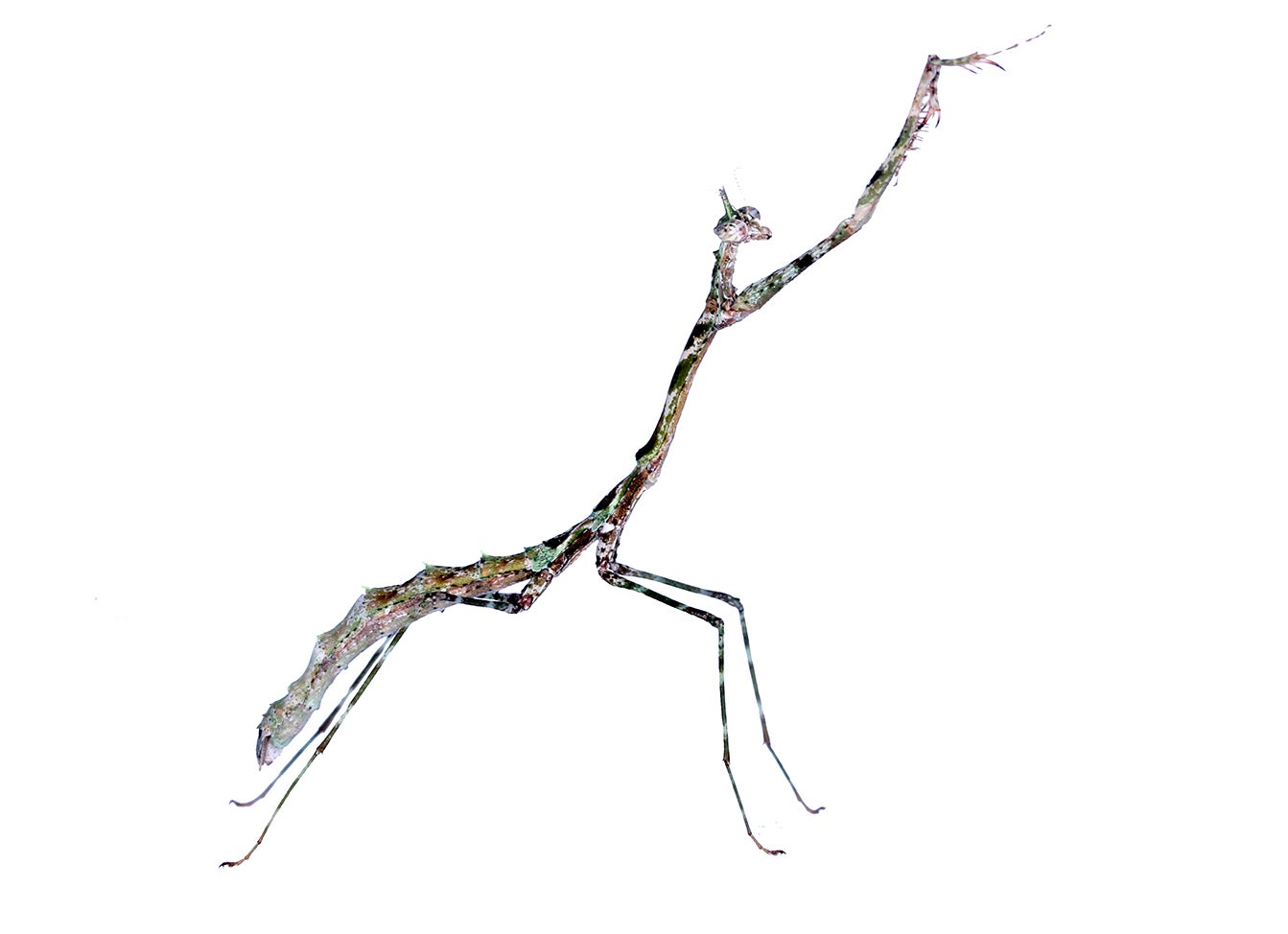 But how the mantis manages to hit such bite-size fare in the first place is remarkable in itself, requiring hard-to-fathom precision. Some of the mites the mantises were spotted spearing were only 0.5 millimetres long.

“Imagine that you want to catch an M&M with a toothpick that’s long enough to reach it from the ground,” said Rivera. “And you have to do it in one shot. Clean. Boom.”

“It’s a finer, more refined approach to the strike of the praying mantis,” noted Rivera.

The mantises, according to Rivera, are “basically shooting a long-distance target,” a feat even more impressive given their small, seemingly simple brains. Further research on how these mantises can hit their targets might have technological applications, like enhancing long-distance navigational systems, suggested Rivera.

“This paper is a good example of modern taxonomy: a new species is described not just as a dry specimen with a strange shape, pinned in a box, but as fascinating piece of evolution,” Roberto Battiston, an entomologist at the Musei del Canal di Brenta in Italy who was not involved with this study, told Gizmodo in an email.

“When you study mantids, you never get bored; they’re always here to surprise you,” said Battiston, noting that the family to which the new species belongs—Thespidae—is particularly mysterious. “They are aliens among aliens.”

Strange as Carrikerella simpira may be, it’s not alone. Rivera said there are definitely other mantises in the same family that are hunting with the same spearing technique, as well as a few unrelated lichen mantis species from Southeast Asia that have independently evolved remarkably similar foreleg spines.

There are also some mantises that, when young, have foreleg spines that look very similar to those of Carrikerella simpira but eventually grow into adults with more conventional weaponry. So it’s possible there’s a small army of secretive, stabby mantises at various life stages out there, just waiting to be fully recognised.