A thing you should all know by now is the 2020 Hyundai Veloster N is an incredible, everyday hot hatch. But since Hyundai has a sense of humour, itâ€™s also cooked up an absolutely nuts mid-engine, rear-wheel drive prototype, Ã  la the Renault 5 Turbo and Ford Shogun. Itâ€™s called the Hyundai RM19 and I got a taste of what itâ€™s like on the track. It drives as crazy as it looks.


More than that, in just those four laps, it was obvious to me the RM19â€”or idea of it, at leastâ€”was ready for public roads. Obviously, some things need to be nipped and tucked for production. But itâ€™s nearly there.

And itâ€™d be a crime if something like it didnâ€™t hit dealers soon.

(Full Disclosure: After the LA Auto Show, Hyundai paid for one night for me at a hotel in Beverly Hills so it could shuttle me out to the Hyundai California Proving Ground the next morning to drive the RM19. While waiting for my turn, Hyundai also offered a ride in its TCR race car, laps on its oval circuit in the Nexo hydrogen fuel cell car, autocrossing with the Veloster N and off-roading in the Palisade. These activities were all very fun. Did you know it costs the state of California between $US1.5 ($2) to $US2 ($3) million to build just one hydrogen filling station?)Â

Since 2012, Hyundai has been building performance prototypes that all use the RM moniker, which stands for Racing Midship. These cars were meant for research, with racing-derived technology that would trickle down into the automakerâ€™s sporty N models. So far thereâ€™s have been an RM14, RM15, and RM16. And now, we have the RM19.

Basically, the RM19 is the Veloster N road car (which we here at Jalopnik all loved very much) that has the 2.0-litre turbocharged engine, six-speed sequential gearbox and ridiculously huge splitter, rear wing and side skirts from the Veloster N TCR race car. 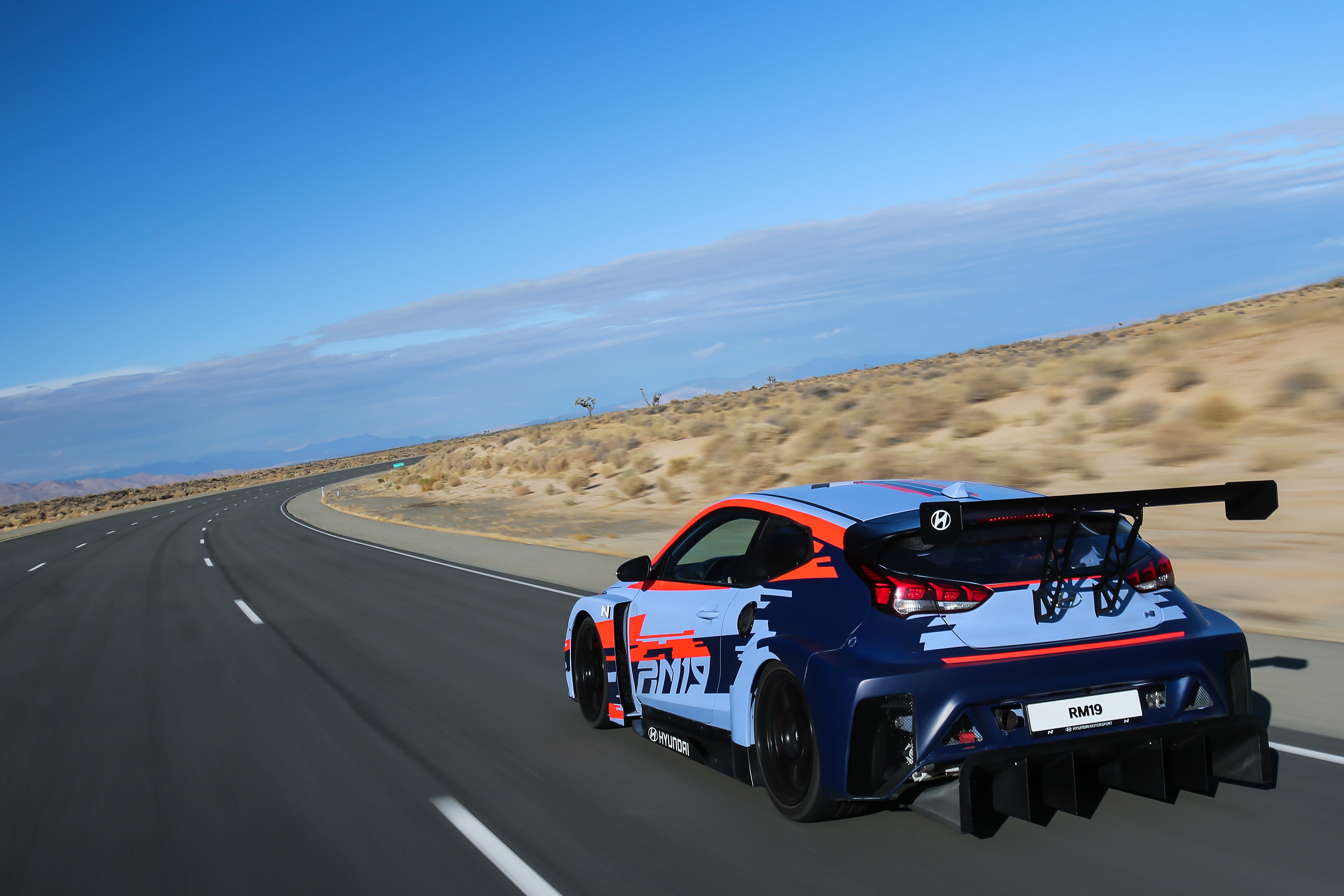 The engine is nestled behind the driver and the interior is semi-stripped out; there are race seats and a racing wheel, but also the infotainment screen and climate control vents remain. If not for the noise from the engine and the harness, youâ€™d almost think you were in a regular car. Almost.

That little engine claims a furious 390 horsepower, 350 lb-ft of torque and sends it all straight to the rear wheels. Hyundai estimates its zero to 60 mph (96 kmh) time to be â€œunder four seconds.â€

It uses a six-speed sequential gearbox, which means it has paddle shifters and a clutch pedal. Those gears are straight-cut and extremely loud. Six-piston brake callipers are found at the front, four-piston at the rear. 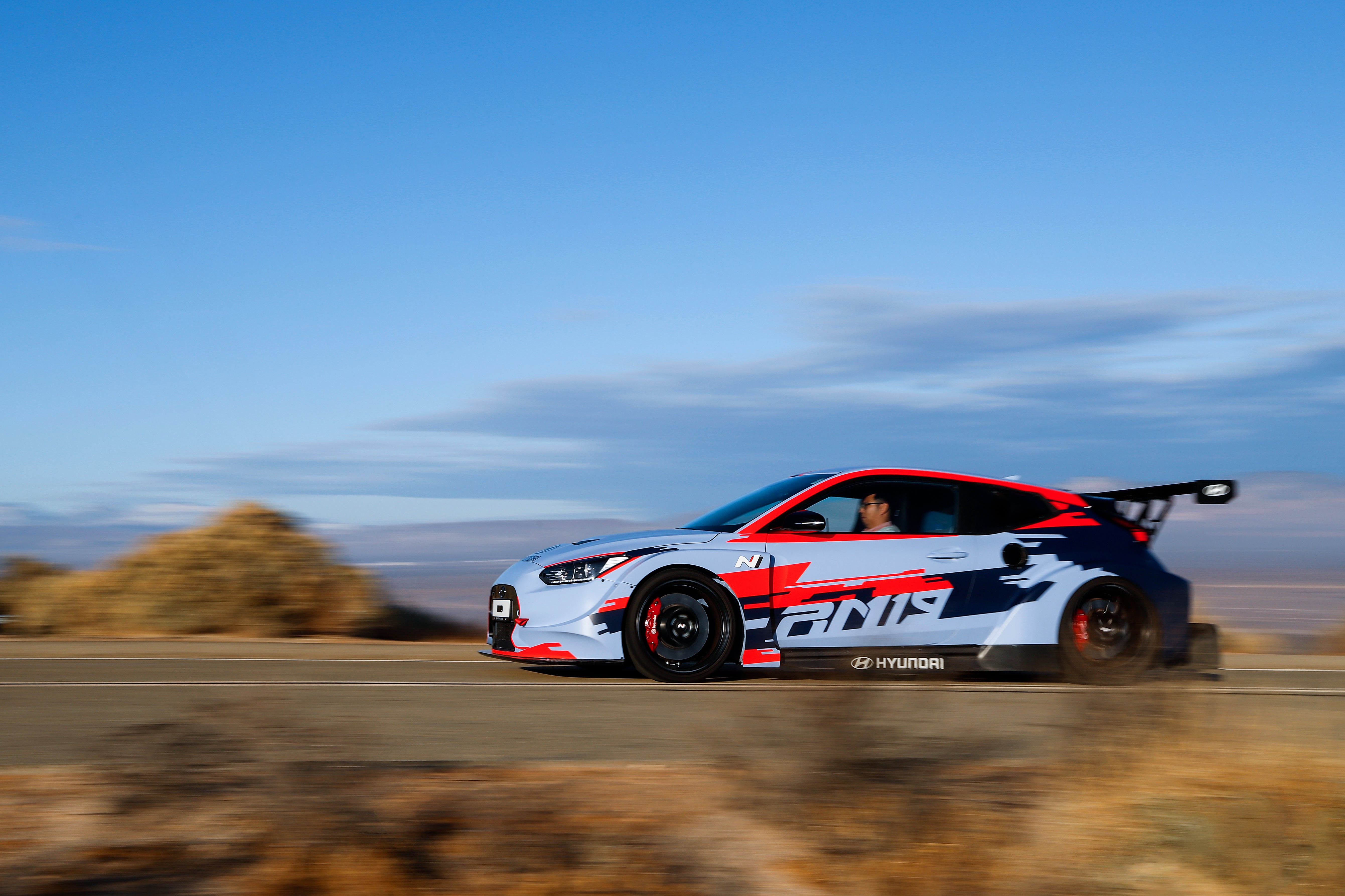 And the wing and the diffuser are gigantic. In pictures, yes, they look impressive. But in person? The wing is big and tall enough that I probably could have rested my chin on it and napped standing up if I wanted to.

The RM19 is loud. There doesnâ€™t appear to be a whole lot in terms of insulation between the cabin and the engine compartment, so every snarl, snap and scream of the engine happens right in your ear. This is not a bad thing.

At idle, the whole thing quivers like a beast ready to leap into battle. Once it gets moving, each gear shift comes violently, brutallyâ€”kicks that quake the entire car and your eyeballs in their sockets. The shrill shrieking of the transmission slices into the cabin, competing with the furious motor for Loudest Thing Youâ€™ll Ever Hear. 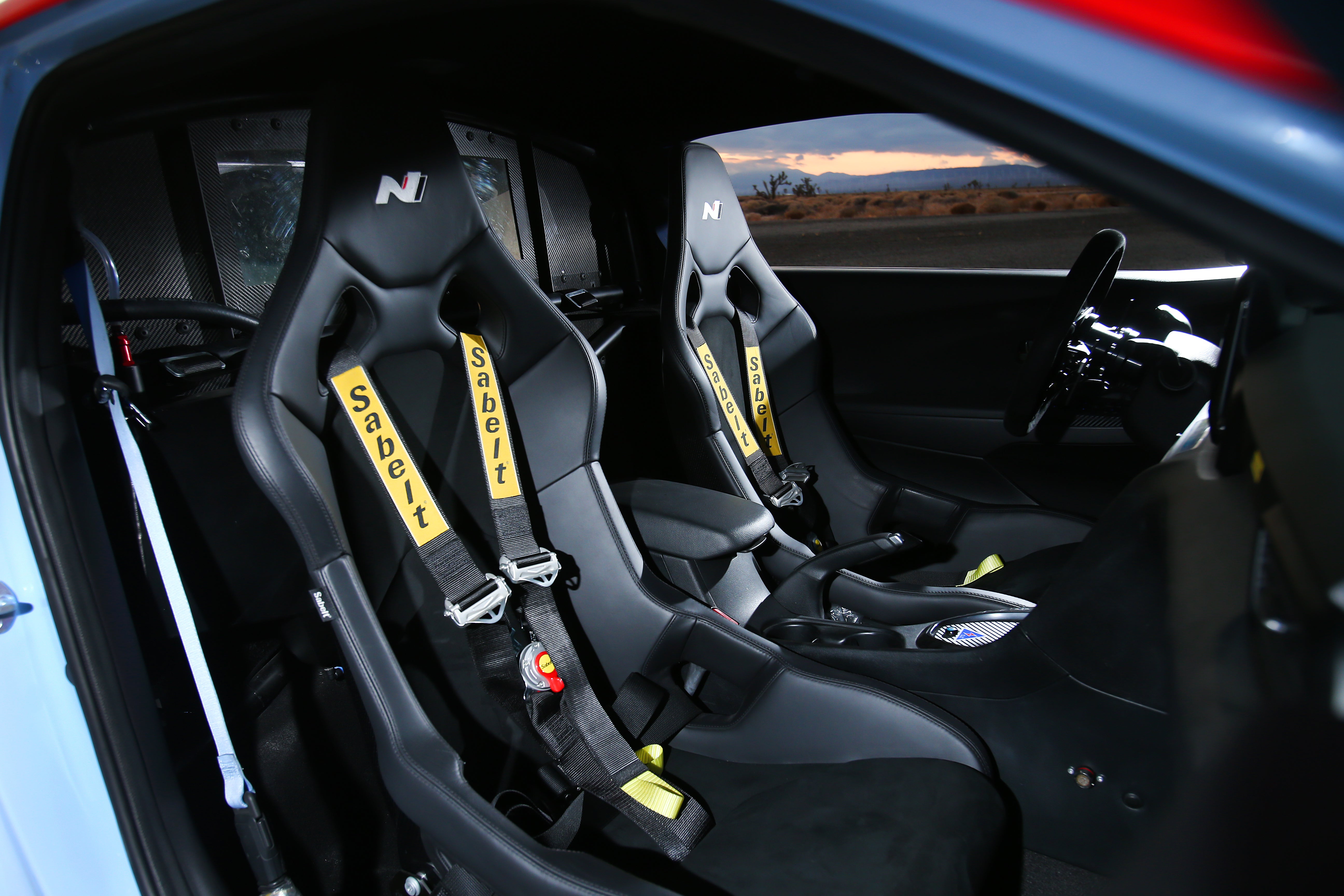 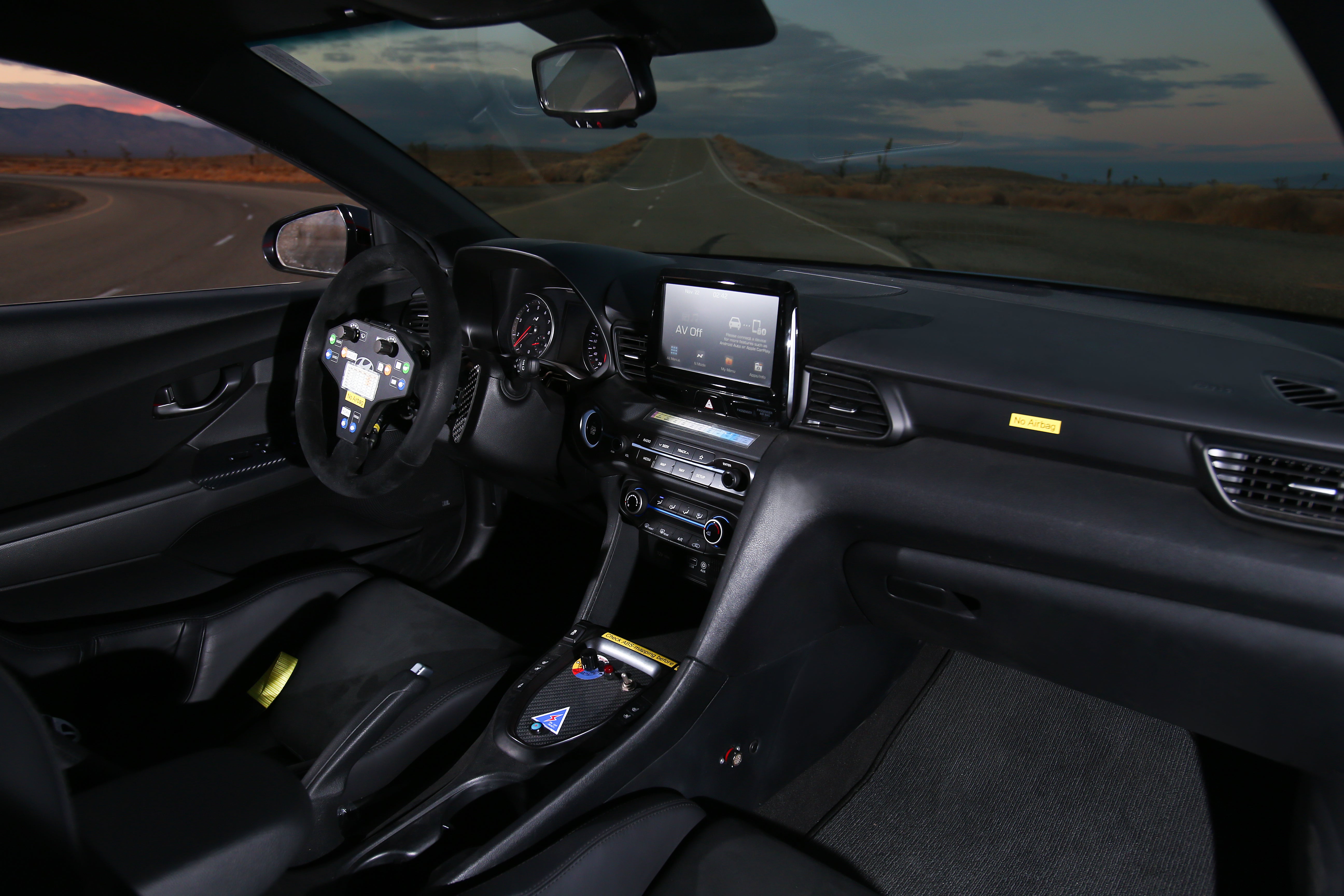 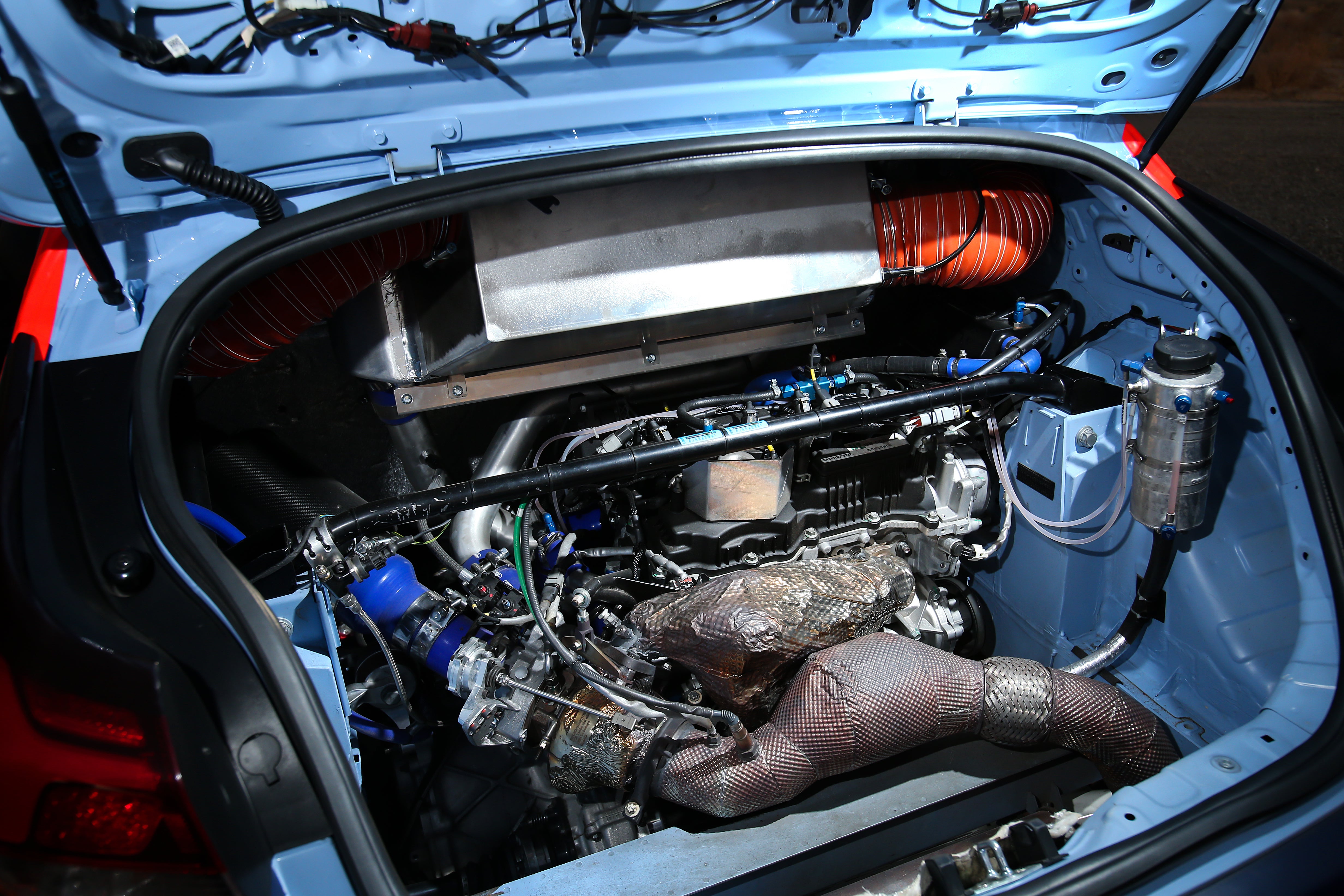 With nearly 400 HP at the ready from a little motor and a huge turbocharger, acceleration comes like an enraged WHAM! This is a savage rip forward, unlike the smoothed out take-offs you find in an all-wheel drive car. Behind the skinny wheel of the RM19, itâ€™s extremely apparent the power is coming straight from the back and rocketing you into what feels like next week; those front wheels certainly arenâ€™t acting like a security blanket.

Good thing the RM19 has grip, then. Thereâ€™s so much grip and downforce that you might even start thinking the car can suction itself upside down in a tunnel.

Confidence leans your right foot into the accelerator for longer and longer amounts of time, the fingers of your right hand flicking up through the gears like pages in a book. Approach a tight corner and hit the brakes. Without looking back, it feels like the car has deployed a parachute behind you, pulling a few Gs in deceleration alone. Aim it at a straight and the process starts all over again. 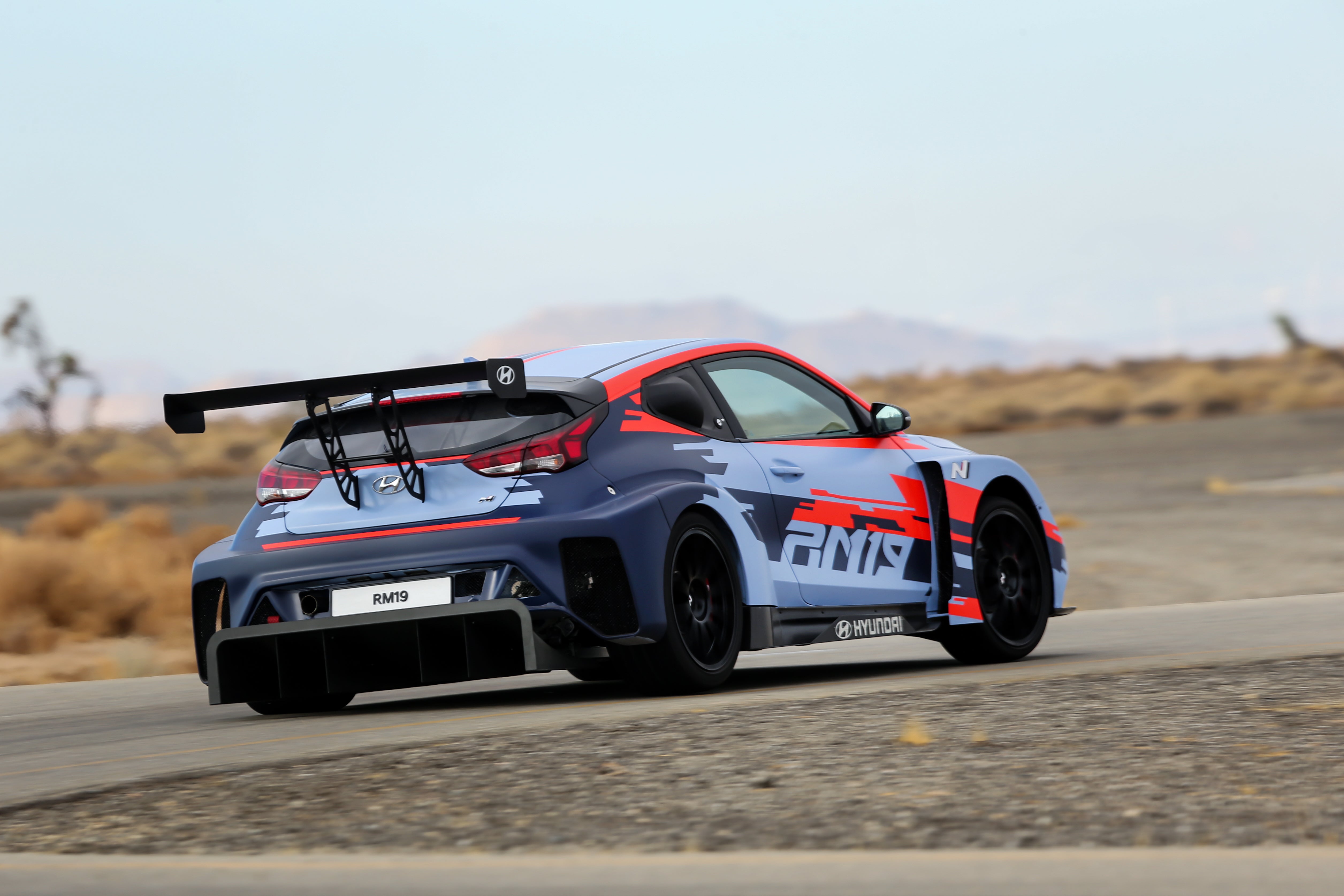 The regular Veloster N comes with either 250 or 275 HP sent to the front wheels. The RM19 is like if you took that, lit a fire under its arse and then shot it up with cocaine. Thatâ€™s the fantastically dramatic difference a race transmission, rear-wheel drive and about 150 more HP does.

I climbed out of the RM19, my shirt glued disgustingly to my back with sweat. Not because it was warm in the car, but because it was terrifying and exhilarating and raw and fun and thrilling all in one. It was fabulous.

I suppose all the fun I had in the RM19 is also its greatest downfall. Iâ€™m worried the production car will never be quite like this.

Sure, elements of the prototype, such as engine placement, increased aerodynamics and its rear-drive setup, could ostensibly show up in a road-going model, but the aggressively tuned engine and the sequential transmission and its straight-cut gears definitely would not. 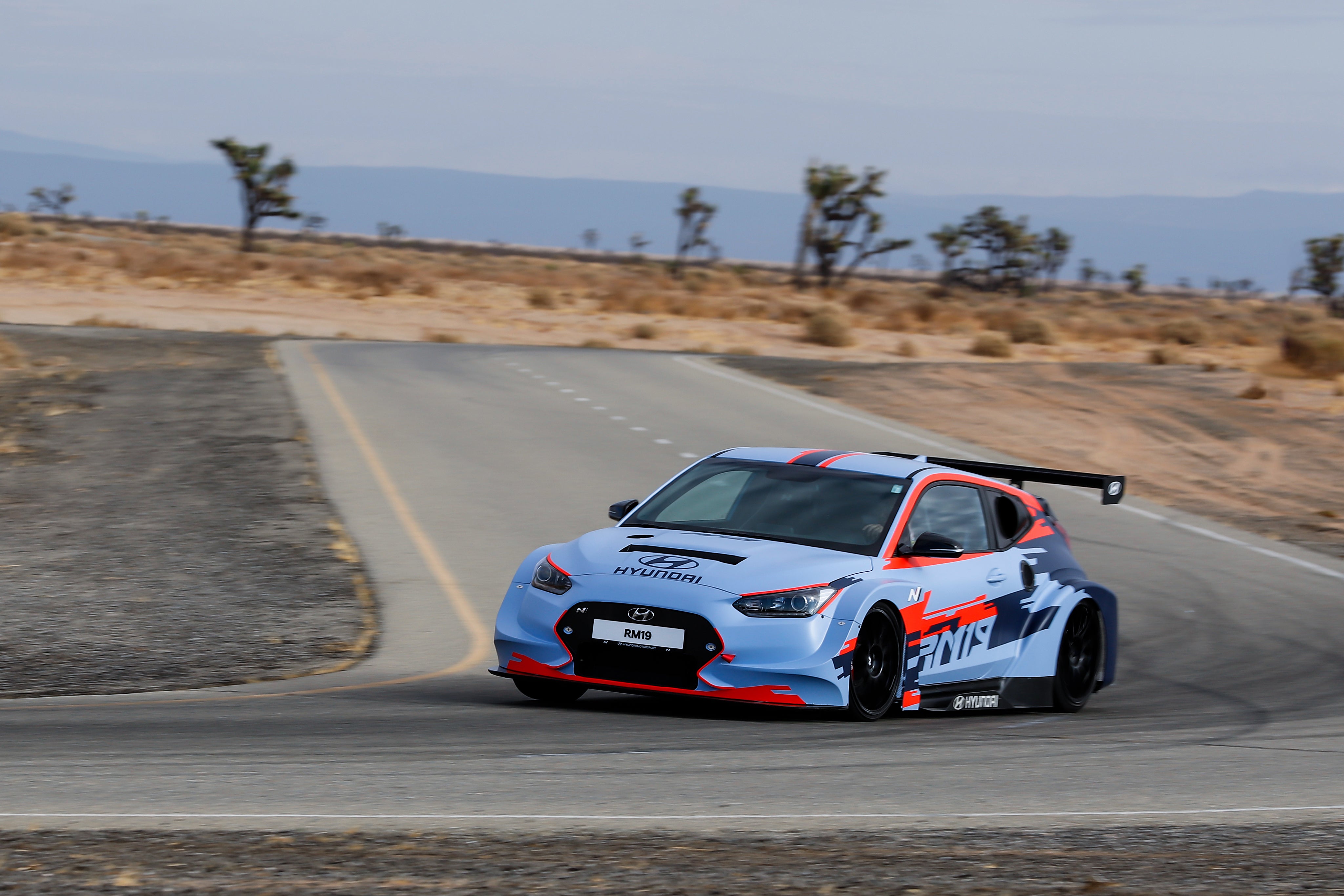 Itâ€™s silly to want such a prototype to become street-legal, but a girl can dream. That being said, the car handles well and is incredibly fun to drive. It even has wing mirrors. A production-ready version does not feel like a far leap.

During a technical presentation, Hyundai revealed the project is â€œheading to road-use,â€ but also, â€œat this point there is no decision to make it for the marketplace.â€ I guess.Â

A production-version of the RM19, however, could use the new, 2.5-litre â€œSmartStreamâ€ engine, mated to an upcoming eight-speed dual-clutch transmission that will be made in-house, according to the last slide in the technical briefing. Frankly, I think this is what we can expect most realistically.

Will it keep its mid-engine, rear-drive setup, Renault 5 Turbo-style? That remains to be seen. 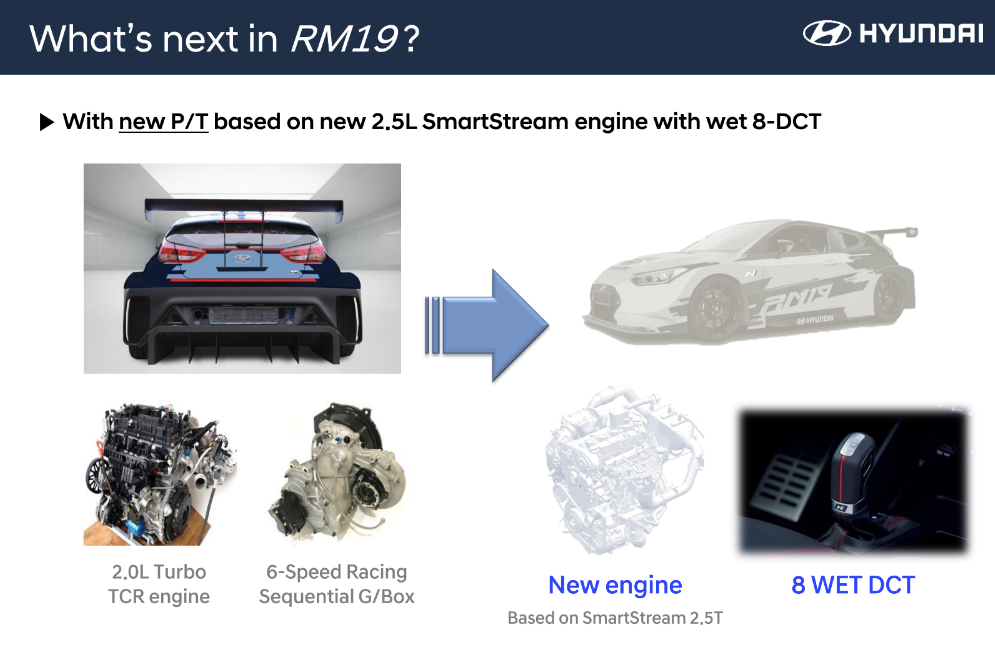 In a perfect world, the RM19 would already be in production and everyone would have bought a dozen so automakers were all encouraged to take more risks and build fun, enthusiast cars. But we donâ€™t live in a perfect world.

I wonâ€™t say it wasnâ€™t a little cruel to let me drive something so cool that probably wonâ€™t get made. But sullenness aside, I walked away from RM19 with high expectations from Hyundai. The Veloster N is a damn-near perfect hot-hatch. It is a joy to drive, which tells me the folks at Hyundai know how to make a fun car.

All they have to do now is make a mid-engined one. 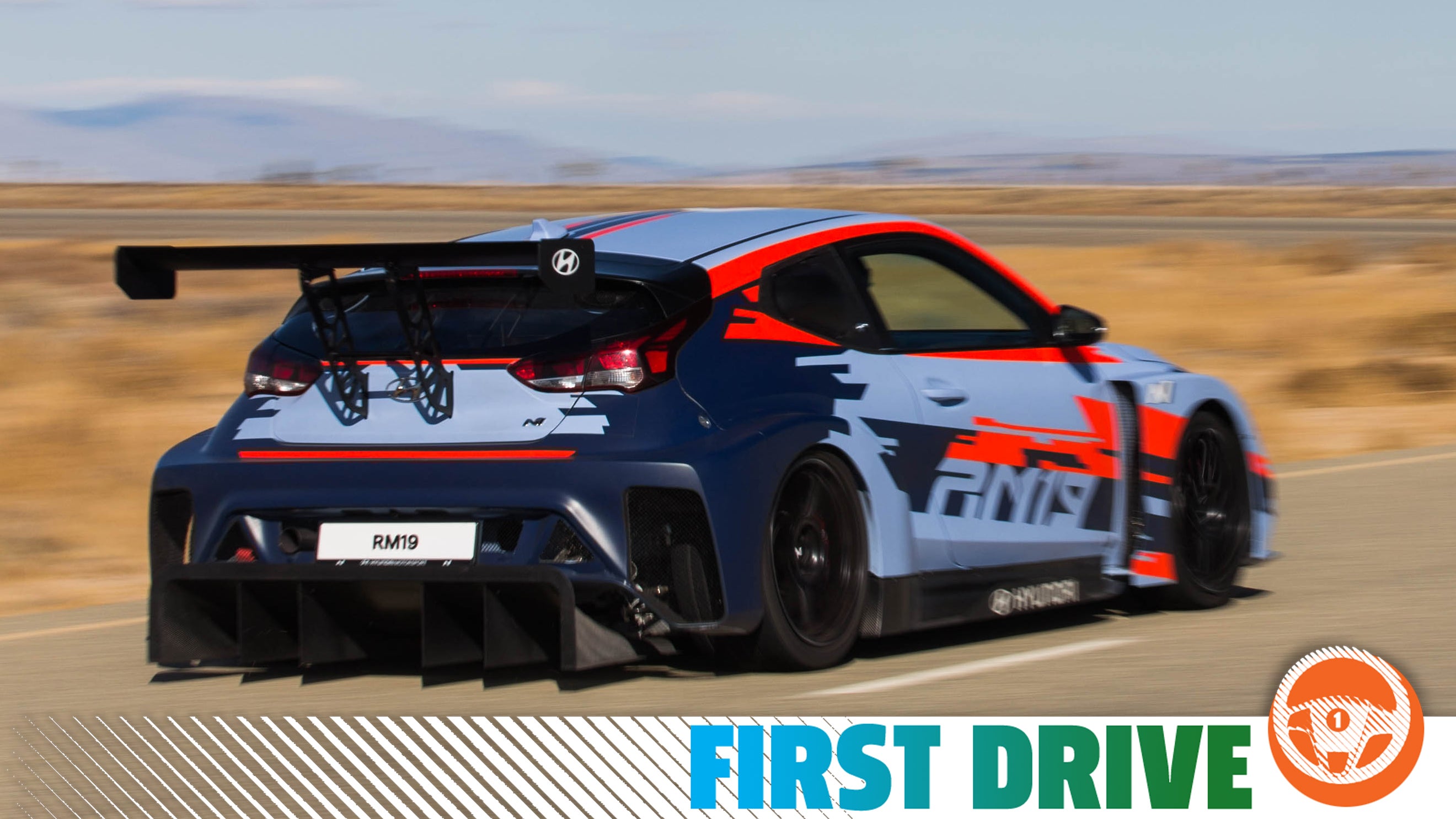 A furious little bottle-rocket of a car.

If the production version is anything like this, I will cry tears of joy. 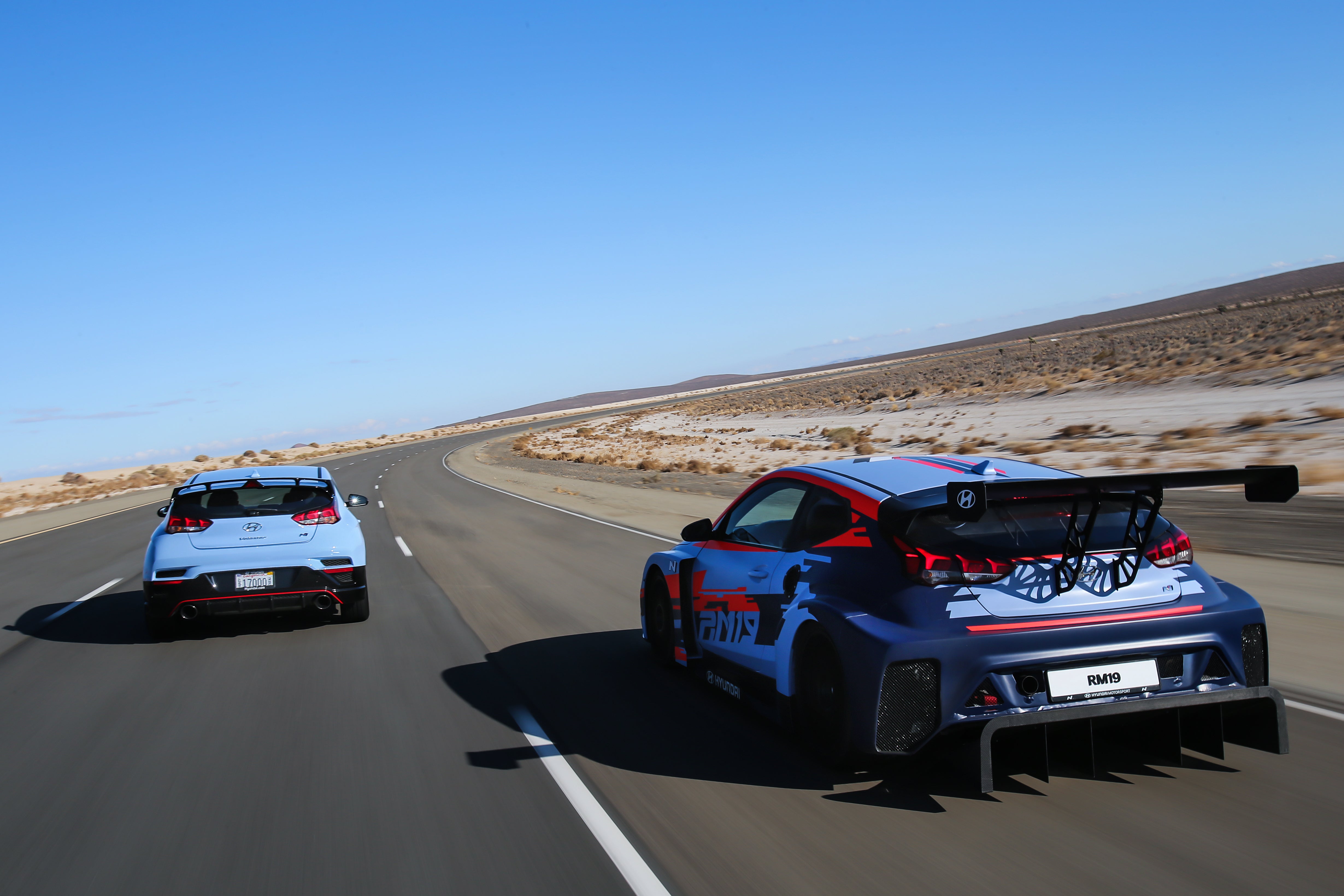