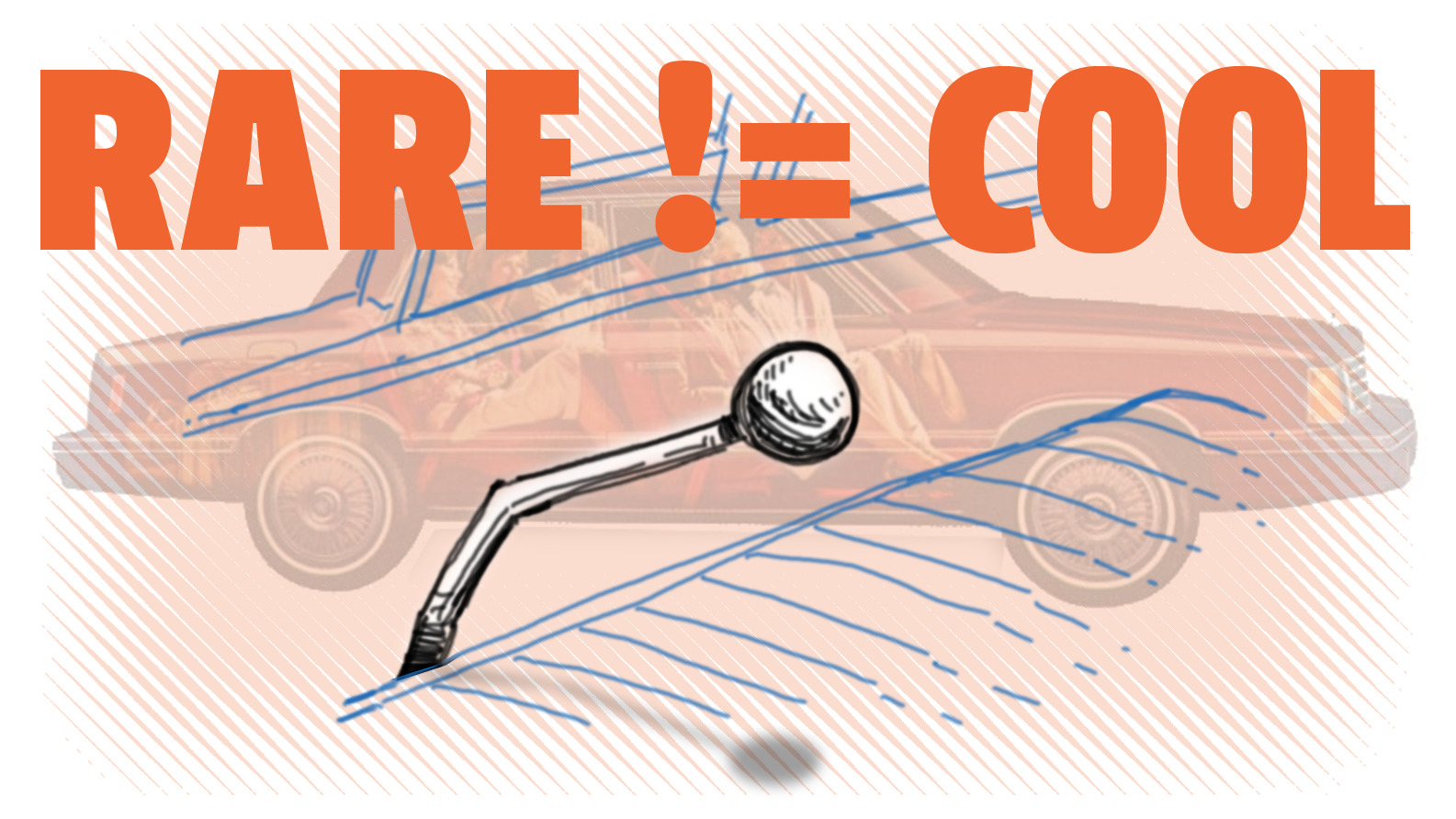 Right off the bat I’d like to apologise for the lack of direct photographic proof of this car, since my ride in it was decades ago, at a time when I was young and beautiful and in no way aware that one day I’d be relaying any of this to anyone, ever. But I promise you it’s all true, and the car I was in was indeed remarkably rare, and yes, at the same time astoundingly dull. With all that in mind, please prepare yourselves accordingly, perhaps by reading this over a dropcloth.


As you know, I’ve been in and driven many very rare and unusual cars: one-offs, hand-built works of art, incredibly old survivors, and abortive prototypes, but this one was a bit different, in that it was a dirt-common car with an unusual option: it was a Chrysler K-Car with a manual transmission.

This memory goes all the way back to the late 1980s, when I was in high school—remember, I’m miserably, painfully old, and as such went to high school in the pre-mobile phone, pre-parents actually giving a shit about their kids era, which meant almost everyone I knew drove unsafe hunks of shit as their first cars, and those included a shockingly high number of early Chrysler K-Cars, passed down to kids after a mere eight or nine years of parental endurance until those parents could get into something, anything better. 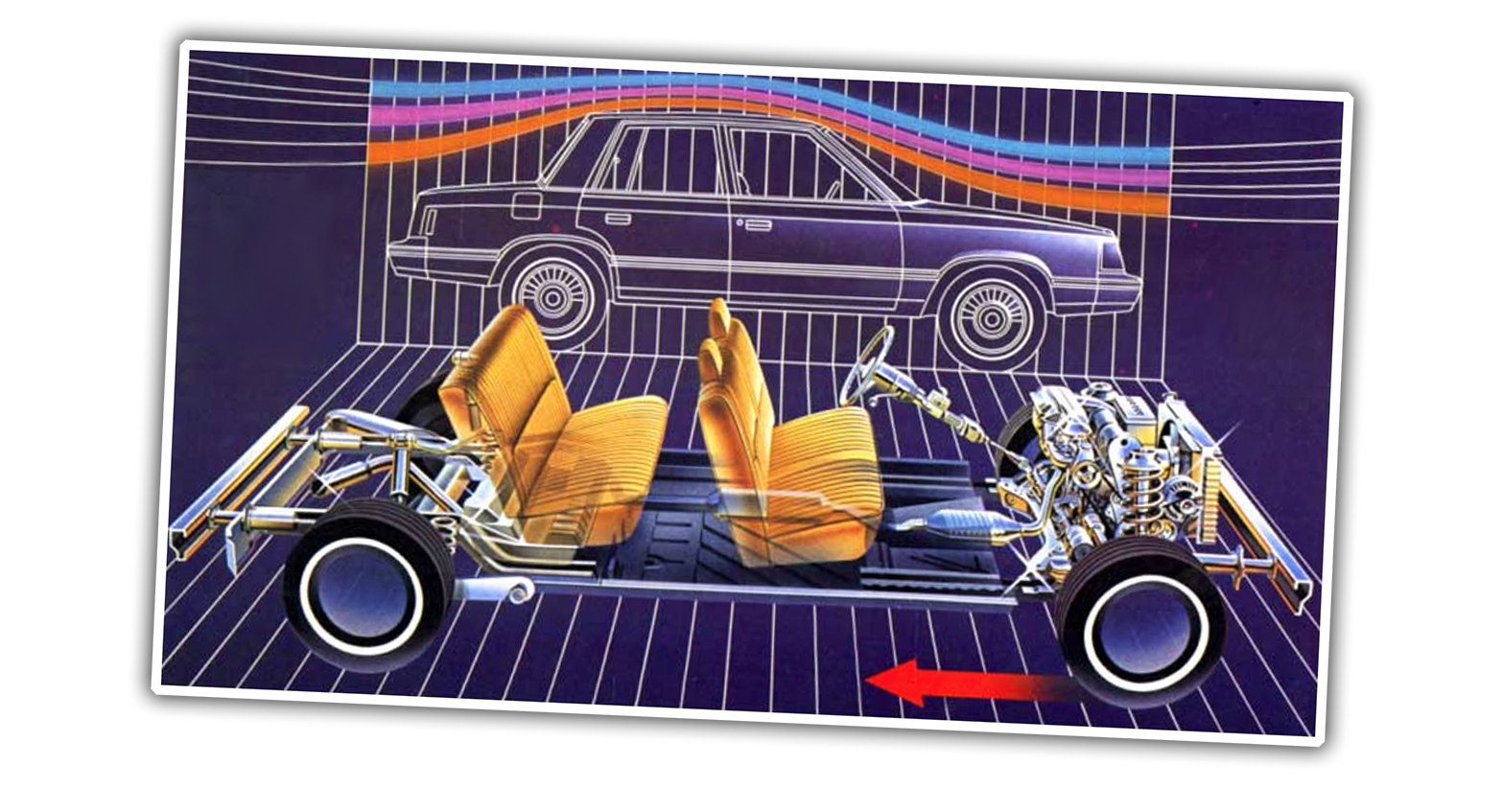 should that red arrow be going the other way?

Most of the K-cars my peers had were the early-gen ones from 1981 or 1982, Plymouth Reliants or Dodge Aries, either wagons or four-door sedans, boxy and so wildly generic looking that you’d think the designer took the car icon from a NO PARKING sign and just figured good enough.

Nearly all of them had the shitty column-shift Torqueflight three-speed automatic, which rendered K-Cars incredibly slow. My best friend had a Dodge Aries, and that thing was a spectacular dog. Mornings on the way to school it usually couldn’t be coaxed past 35 mph, and, despite having an alleged 84 horsepower, was one of the few cars I could reliably spank in my allegedly and likely optimistically 60 HP ‘71 Super Beetle. I’m pretty sure most of this sluggishness was due to that automatic transmission. 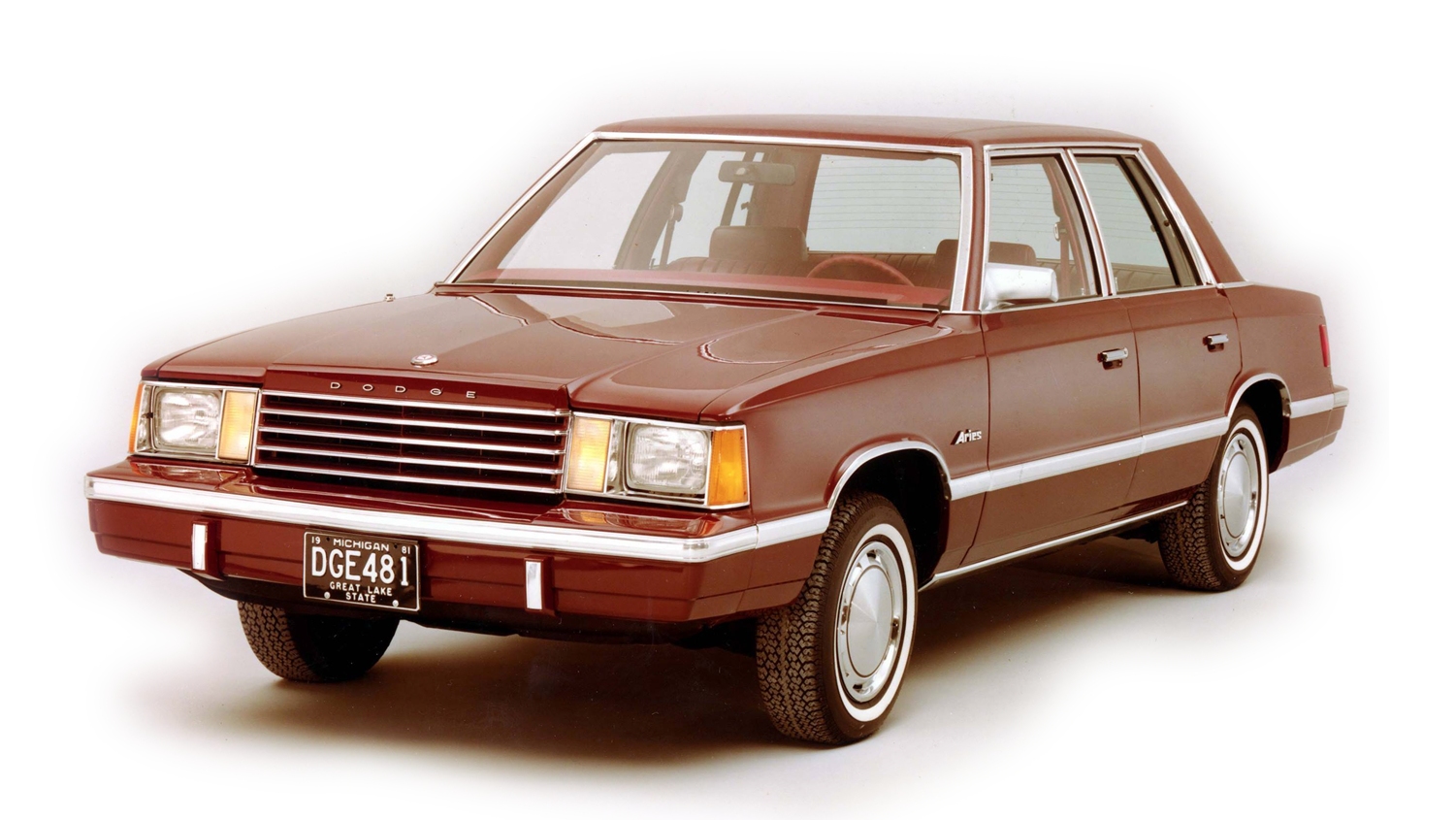 From what I’ve been able to tell, K-Cars could be had with two manual transmissions, the four-speed one or a five-speed, which could only be spec’d with the bucket seat option.

I’ve not been able to determine exactly how many K-Cars had manual transmissions, but from what I have found out, it’s not many. Even the K-Car obsessives at the Chrysler K-Car club seem to have only encountered them rarely—and those that have seem to be like me, having only seen one per lifetime in person.

I can’t remember entire years of 11th grade maths classes or half the faces friends have shown me pictures of at class reunions I’ve ignored, but the way this K-Car shifter was set up is seared into my head.

The whole thing felt like an afterthought, looked to be made of generic parts found in a bin somewhere behind the factory because nobody was going to order these cars, anyway. 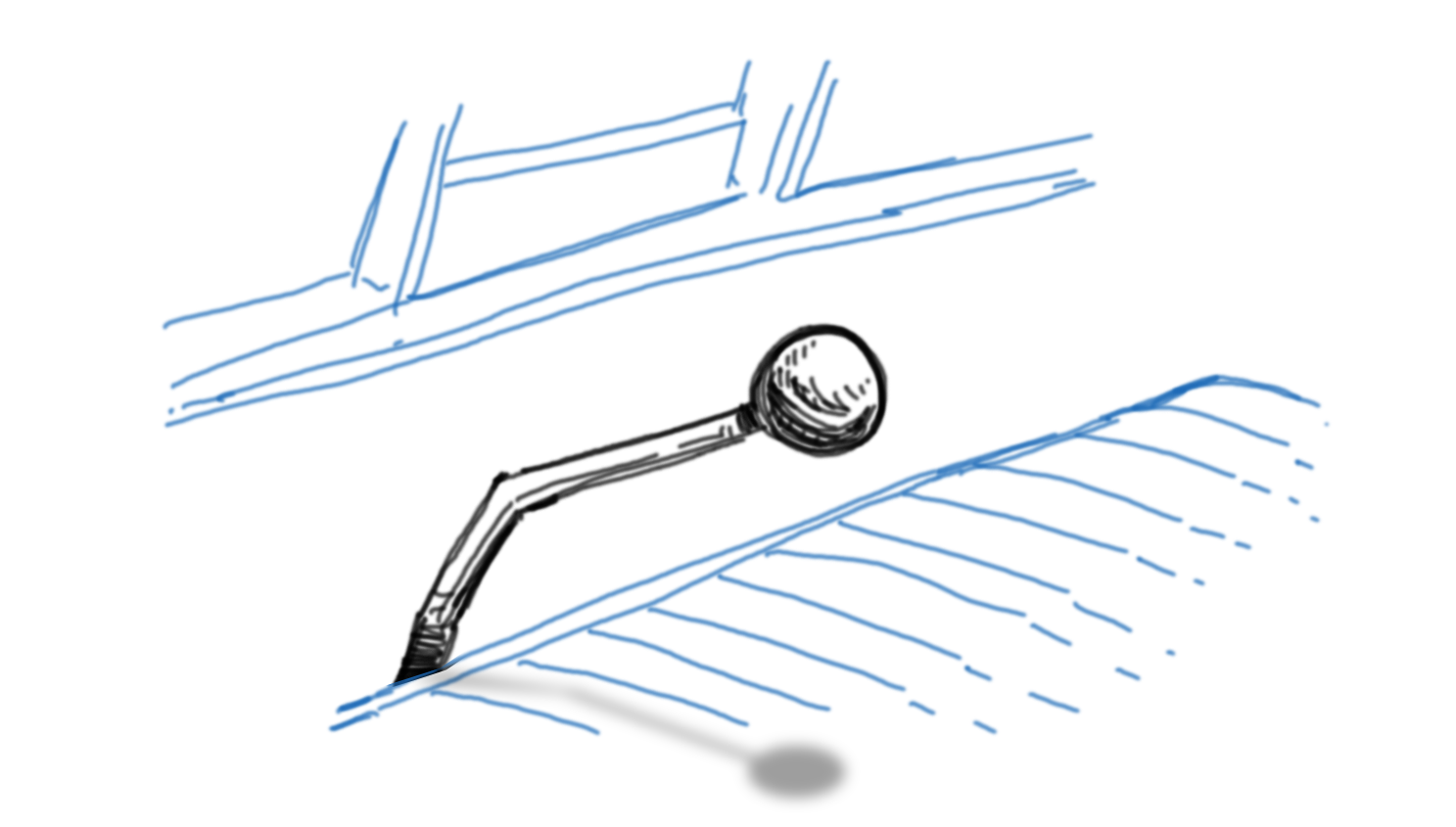 The shifter was one of the most dramatically-cranked shifters I’ve ever seen—pretty much a chrome 90 degree rotated “L” that grew from a little box on the floor in front of the seat and bent back over the centre part of that bench seat, rendering it pretty much useless for an occupant.

The shift rod was topped with an unadorned, dull black plastic ball that didn’t even bother to have the shift pattern stamped on it, because, oh, who cares. If you’re buying this, you’ll figure it out.

I vividly remember the kid who had the car, too—he was a kid from my neighbourhood, not really a friend but a friendly-enough acquaintance that I must have asked for a lift to school because I didn’t put my Beetle back together right over the weekend, or something like that.

He was incredibly Nordic-looking, like a young Ed Begley, Jr, kind of. He had a very Swedish name, too, I think. I also remember that this kid was in a different Boy Scout troop than I was, and once told me with a totally straight face that his troop “made men,” which made me laugh long and hard.

Anyway, I vividly recall watching Swedekid Swedensen row through those gears, the awkward gearshift seeming to be always mere inches above that bench seat, the whole thing seeming hilariously clumsy and poorly thought out. I loved it. 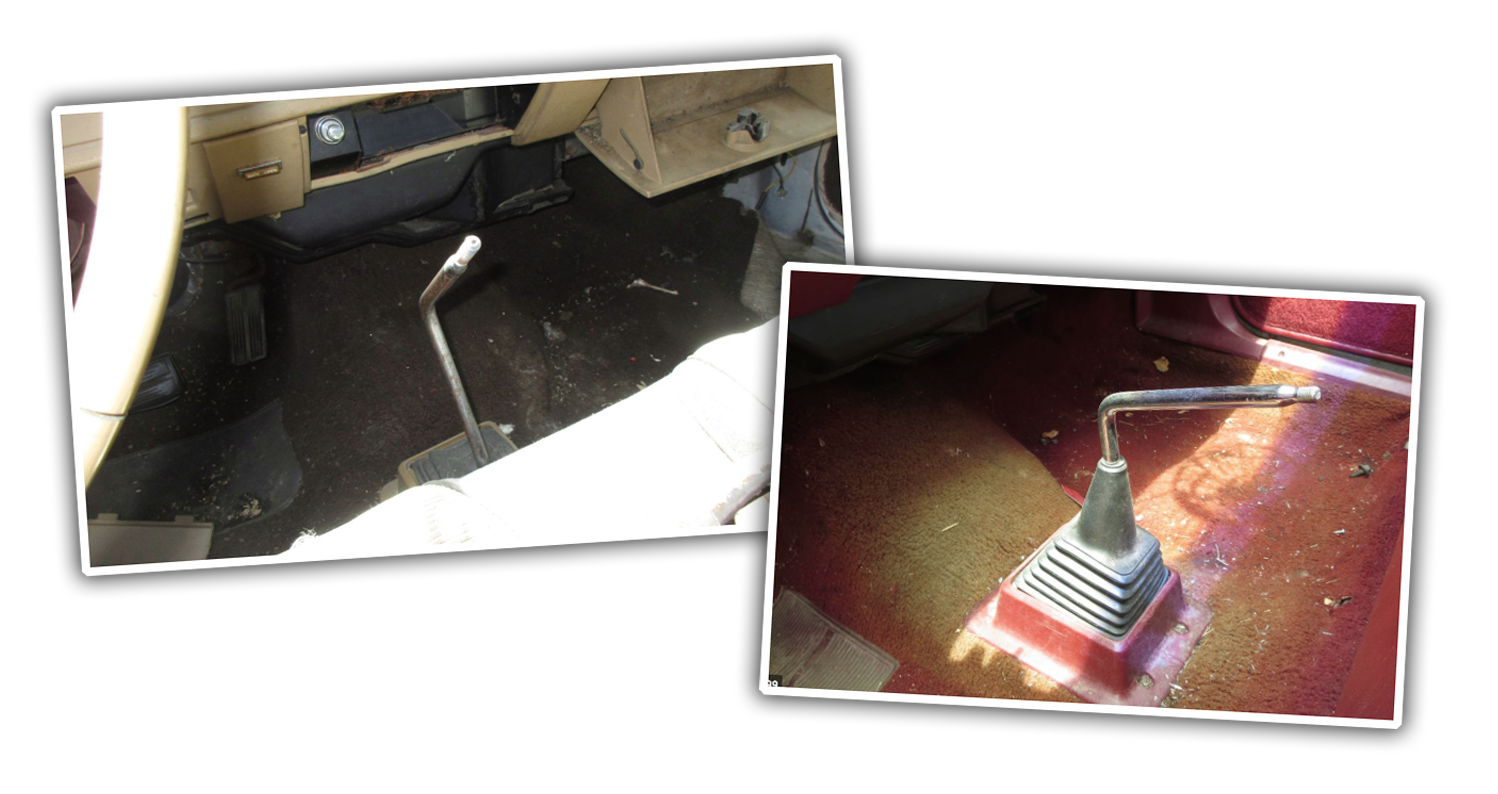 I’ve only found a couple of pictures of this shifter setup online, from our old pal Murilee Martin’s junkyard explorations, and those examples are missing that featureless orb used as a shift knob.

Both do show the dramatic crank of the shift rod, though the proportions seem different; I think I remember it being more like the red-interior’d one.

The only reason anyone might order a manual four-speed, bench seat K car back in the day had to be because of extreme and likely hilarious-level cheapness. Sure, I think it accelerated a bit better, but if that was your criteria and you were looking at K Cars, everything had to be going wrong in your life.

In hindsight, I look back on my brief ride in that car and realise that I had experienced one of those magical events in one’s motoring life that are hard to explain to anyone not miserably afflicted with the same level of gearheadedness: the interaction with a incredibly rare but completely valueless automobile.

God help us all.