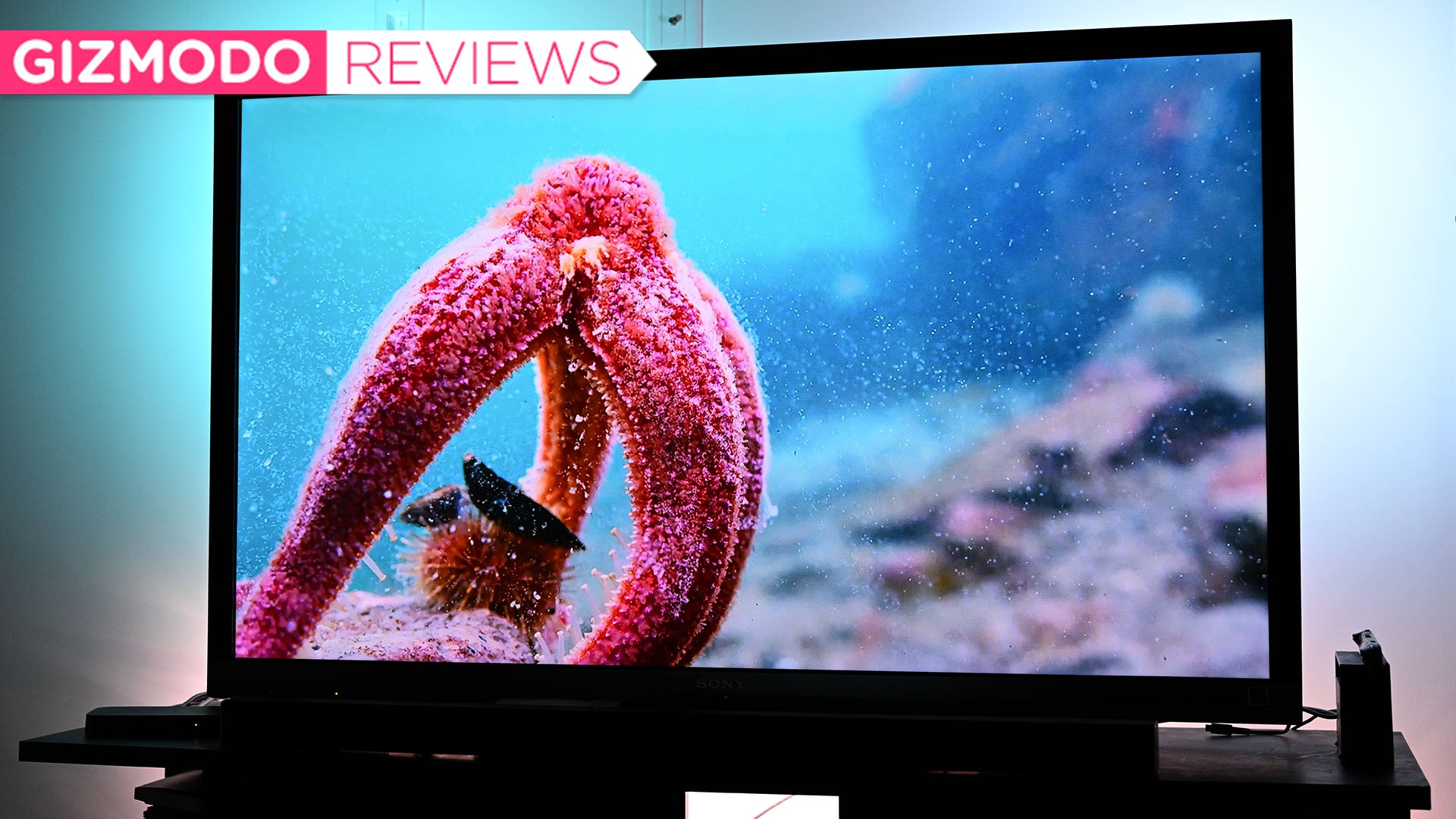 I’ll admit it, there’s something about RGB lighting that just makes everything better, whether its glowing gaming peripherals that pulse with the action, or just thoughtfully placed smart lights to enhance the mood. However, up until recently, the only way to get Philips Hue’s Sync system to work in your living room was to hook your TV up to a PC, which isn’t really ideal. But with the new Play HDMI Sync Box (or just Sync Box for short), you now have the ability to sync your Hue lights with whatever is playing on your TV to create a whirlwind of colours in your living room.


Editor’s Note: Australian pricing and availability are yet to be confirmed.

But before we go any deeper, let’s get something out of the way first. Priced at $US230 ($333), the Sync Box costs a lot for something whose only real purpose is to make your smart lights flash and change colour in harmony with your TV. And that’s before you factor in the three or four Hue lights you’ll need to fully take advantage of the Sync Box’s capabilities and the time it’ll take to re-jigger your AV setup.

Before you even take the Hue Sync out of its box, you’re going to want to update all your Hue lights . Not only do Hue lights take a long time to update (as long as a couple of hours or more), without the latest firmware, you may not even be able to pair your Hue lights with the Hue Sync Box, which will render your efforts to rewire your living room useless until you do. So just get it out of the way first. 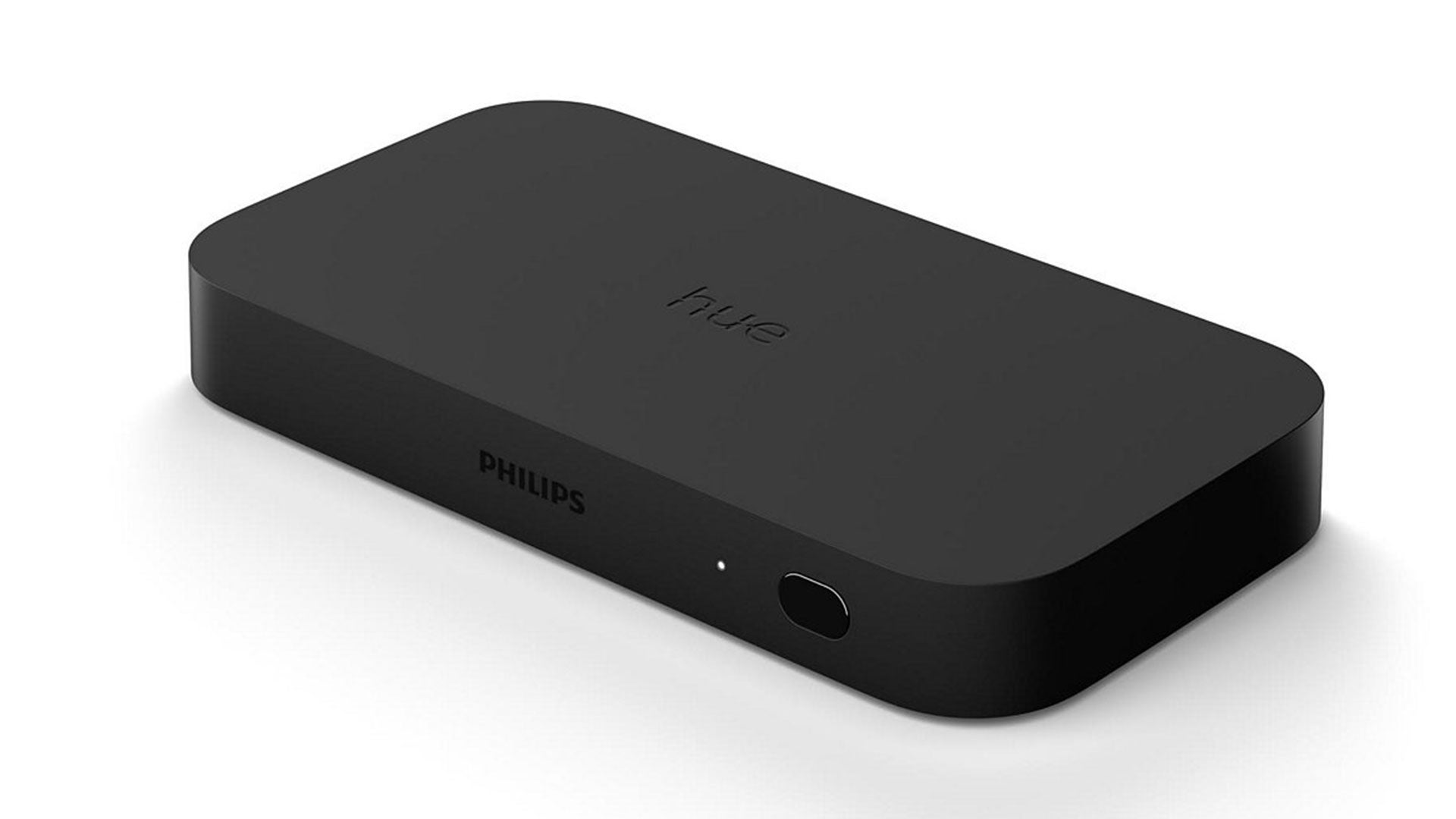 Lots of adjustable settings, becomes automatic once it's fully set up, works with video, music, games

Pricey, only 4 HDMI ports, setup can get complicated, automatic input switching can be finicky

From there, it’s a relatively straightforward process of unplugging the HDMI cables from your various consoles, cable boxes, or streaming devices, plugging them back into the Hue Sync Box, and then connecting the HDMI out port on the Sync box to your TV. Also, because the Sync Box only has four built-in HDMI inputs (plus one HDMI out that goes to your TV) you’ll need to get an AV receiver to connect additional devices.

If you do use a soundbar or a receiver, things get a bit trickier too, as you’ll need to figure out where to place the Sync Box in your chain of devices. For me, I found that putting my soundbar in the chain after the Sync Box produced the best results, as it allowed for full use of the Sync Box’s music syncing mode.

But if you have a lot of inputs to manage, it’s probably easier to put the Sync in the chain after the receiver and enable the ARC bypass setting in the Hue Sync app. Unfortunately, depending on your particular setup, you may run into an issue where music sync doesn’t work unless you can set the receiver to output audio to both the TV and your speakers. 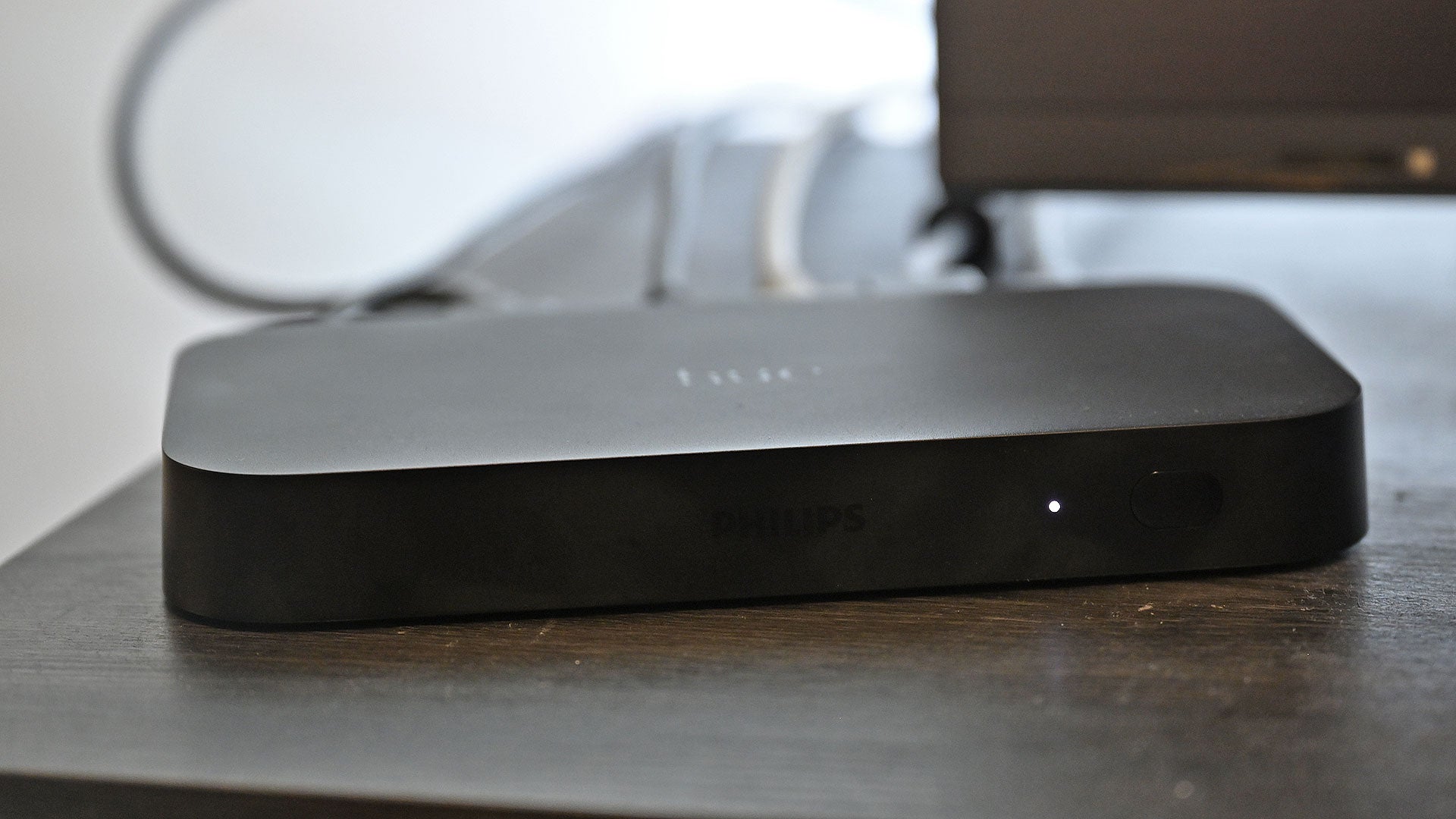 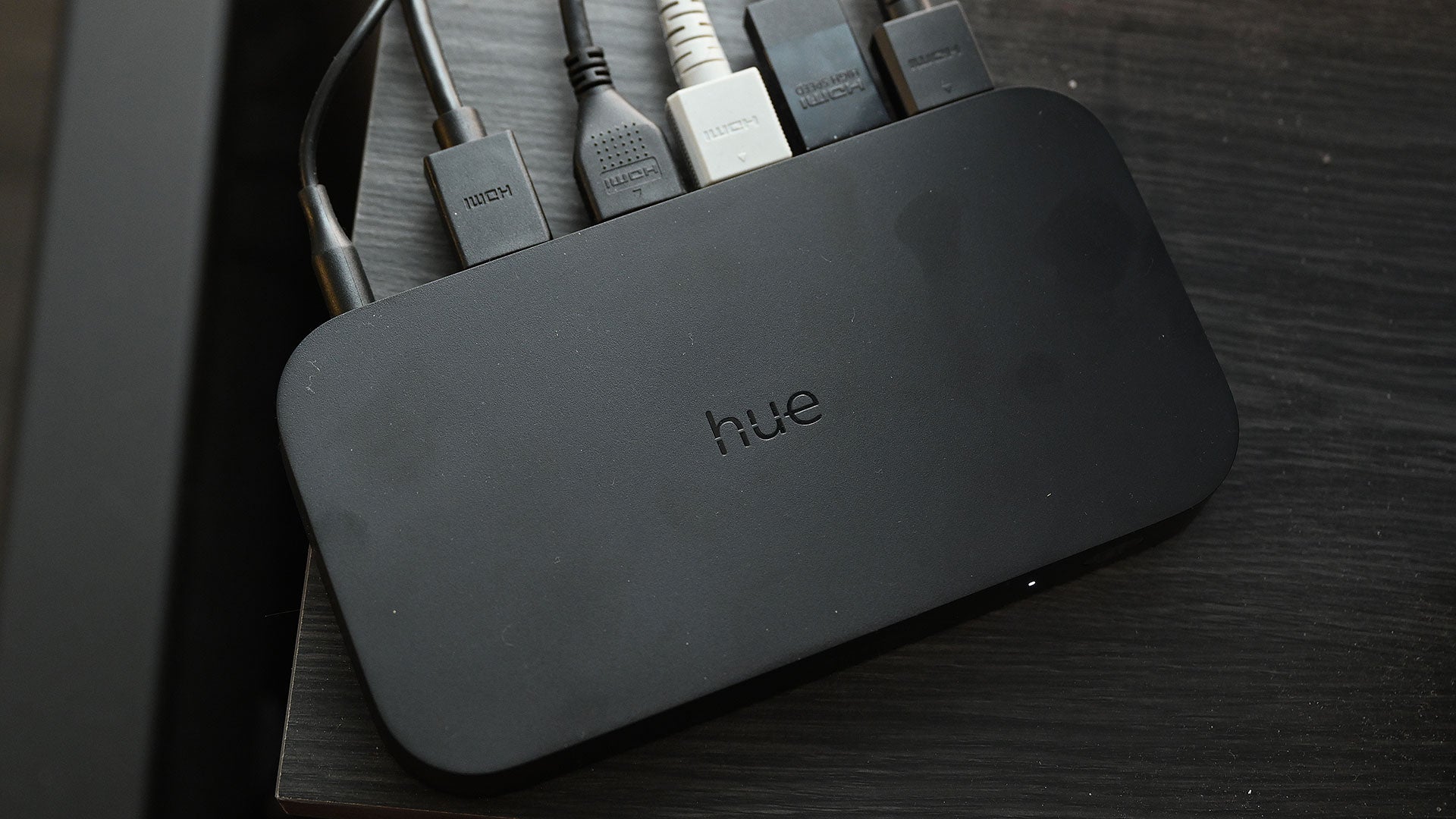 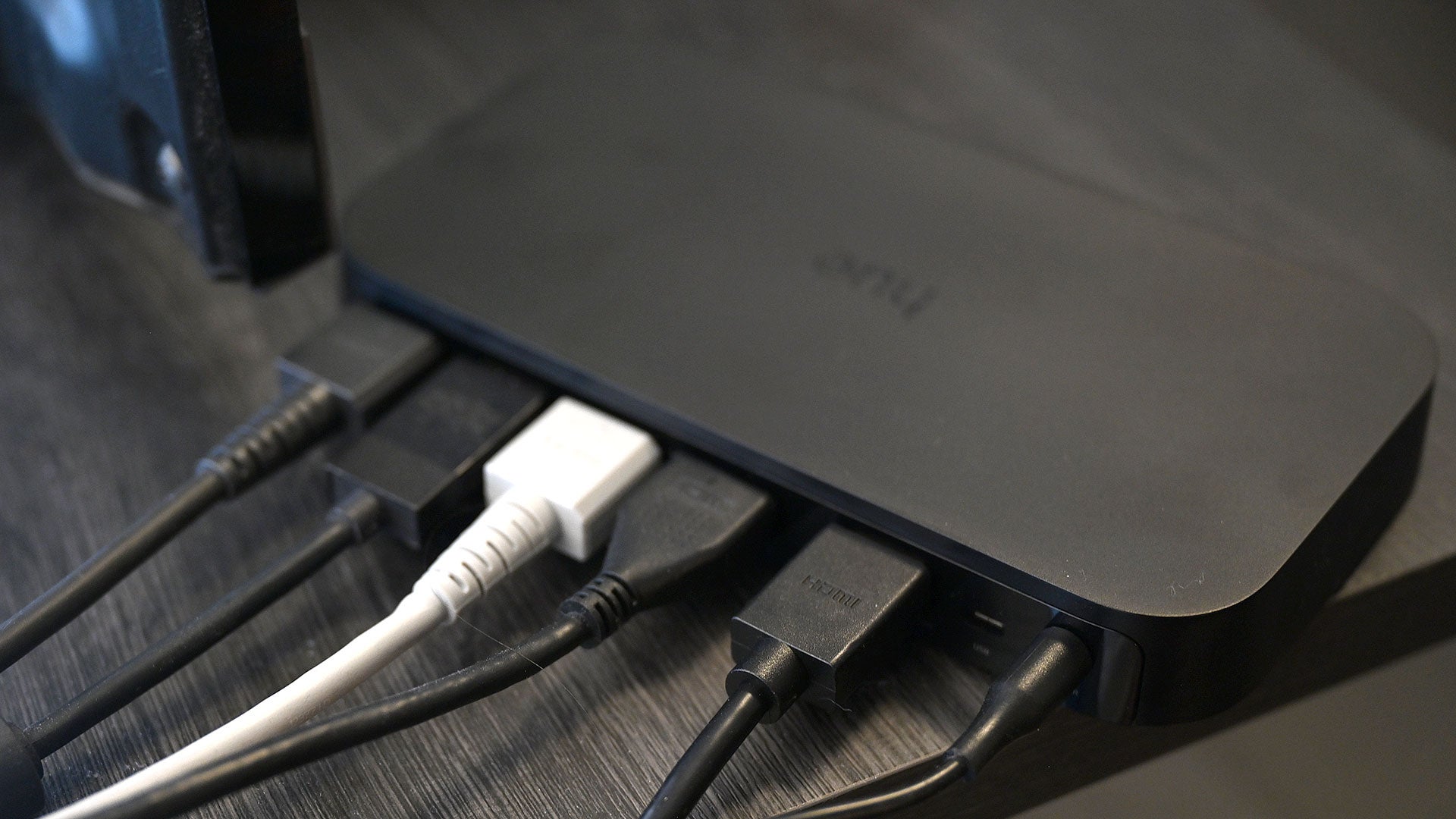 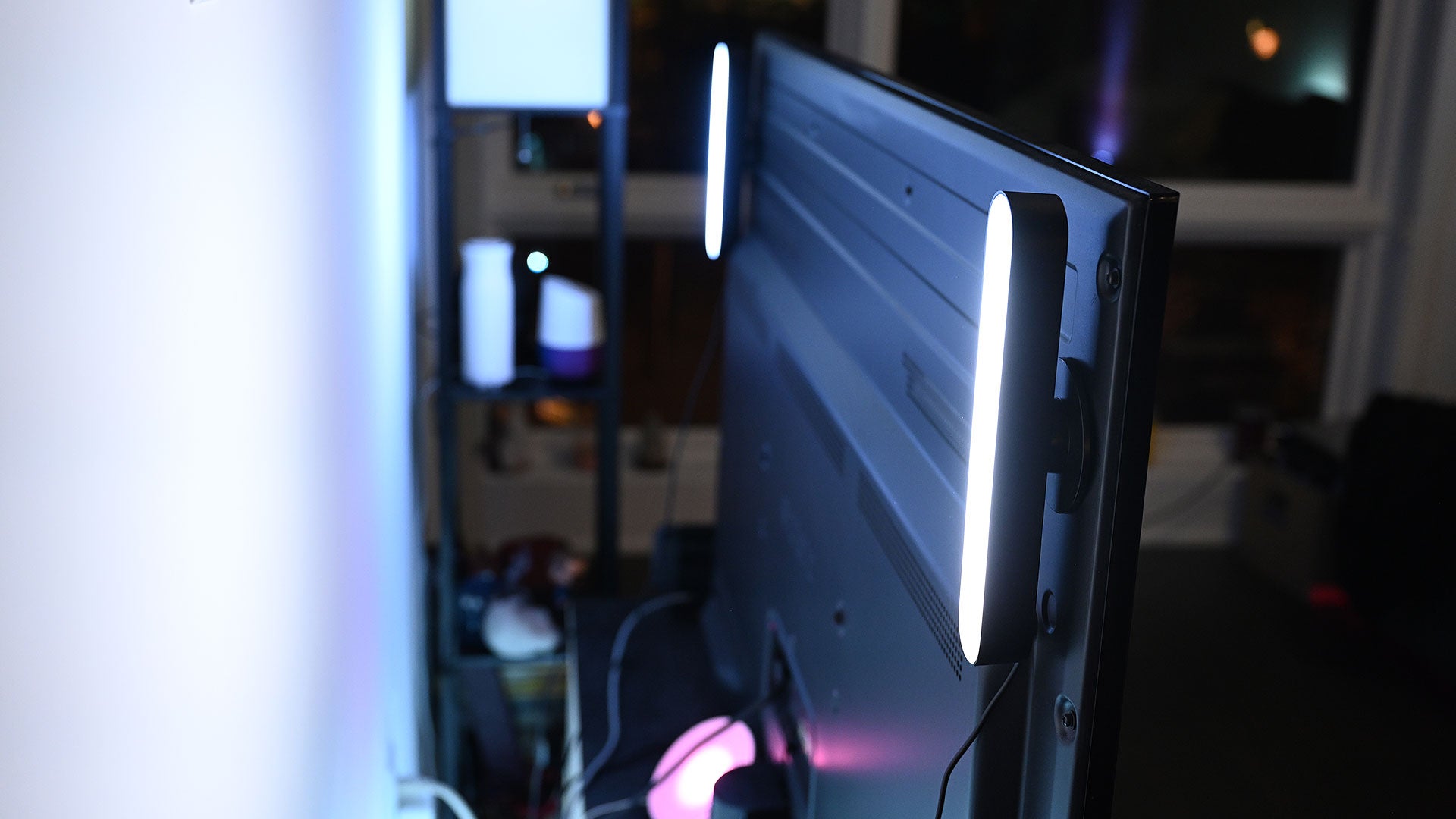 Hue Play lights are probably the best choice for adding lights behind your TV since they are relatively small and come with adhesive mounts.

Alternatively, you can put your receiver/soundbar last in the chain using ARC. Either way, no matter which route you take, setting up the Sync Box is going to take a fair bit of tinkering, especially for people with more comprehensive setups, so you’re going to want to set aside some time to do things right.

Connecting all your devices is only half the battle, because after that, you need to configure your lights. Thankfully, this process is much simpler. The Sync Box connects to your phone over Bluetooth, and from there it automatically detects all your Hue lights, so you can quickly select which ones you want to add to your entertainment zone. The Hue Sync app allows you to virtually place lights around your TV to mimic where they are positioned in real life, and if you tap the icon for each light, there are three options for adjusting the height of each light: above the TV, TV height, and below the TV.

The bigger icons signify that a light is closer to the ceiling, while the small icons are for lights positioned closer to the floor. (Screenshot: Sam Rutherford, Gizmodo)

From there, you can choose if you want to have the Sync automatically turn on when your turn your TV turns on (via CEC), or you can simply leave it in manual mode. One word of warning though: If you do choose automatic detection, the next time you turn your Hue lights on, they will be the same colour and brightness as the last time you used them.

That means if the last time you used your Hue lights was to add ambient lighting while watching a movie, you could be in for some unexpected funky disco lighting the next time you come home. Thankfully, this can be easily avoided by creating a welcome home routine.

Once your lights are configured, you can choose between three profiles for Video, Music, and Game, along with four different intensity levels and an adjustable slider for brightness. By default, the Sync Box is set to automatically switch between inputs when something turns on, but in case you don’t like that, you can also manually switch between inputs by tapping on a source at the bottom of the app, or pressing the lone physical button on the Sync Box itself.

OK, so is all the effort and money worth it? Well that’s going to vary depending on how you feel about RGB lighting. For me, I really like how Hue Sync transforms my living room into something completely different. You can have moody ambient lighting to enchance a spooky movie, or an intense tornado of colours to amp up a video game. Personally, I love when on-screen explosions bathe my entire living room in swirl of oranges and reds. 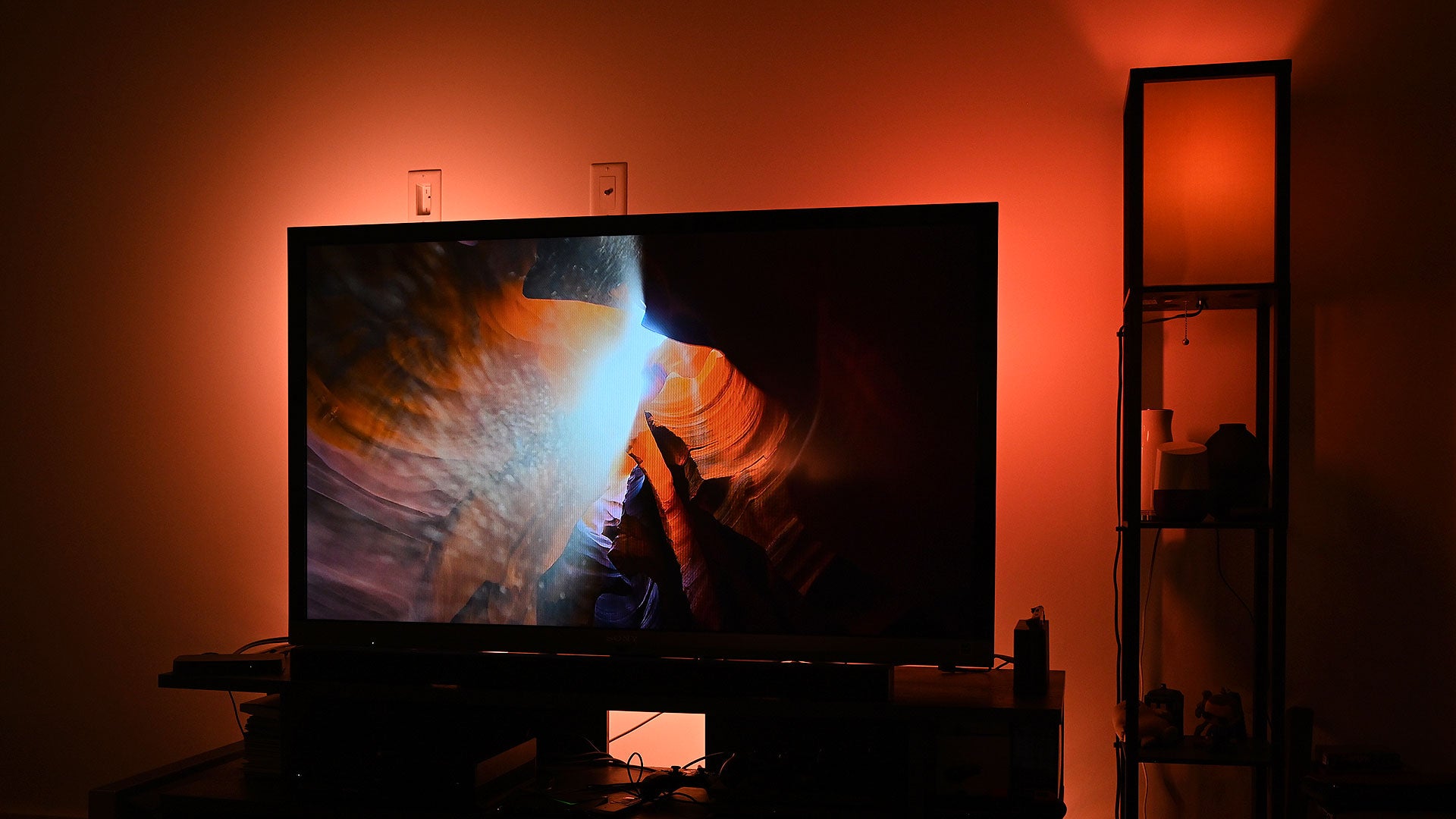 The way the Sync Box works is by analysing the video stream being sent to your TV, and then using an algorithm to determine which colours to send to your lights. This makes sports another great use case, because quite often, the Hue software will pick out the right colours to flash against your walls, adding some extra team spirit to your viewing experience.

When you want to switch between various inputs, the Sync Box can automatically switch to a new device when it detects something being powered on, or you can manually switch between devices by tapping on a device in the app. In my experience, I noticed that automatic input switching worked moderately well, but some devices like the Nvidia Shield were “stickier” than others, causing the Sync Box to not properly switched when I turned on an Xbox One or Nintendo Switch.

However, Hue’s light syncing isn’t perfect, because I noticed that randomly, all the lights will flash white, which can be especially jarring during darker content. Sometimes, it seems like the system gets confused by transitions in between scenes, causing the Sync Box to reset and go all white, while other times, there’s no a clear explanation for why everything suddenly gets lit up like a battlefield. I also found that Hue’s intense setting was too much even for me, with the medium setting offering a good balance between ambiance and responsiveness. 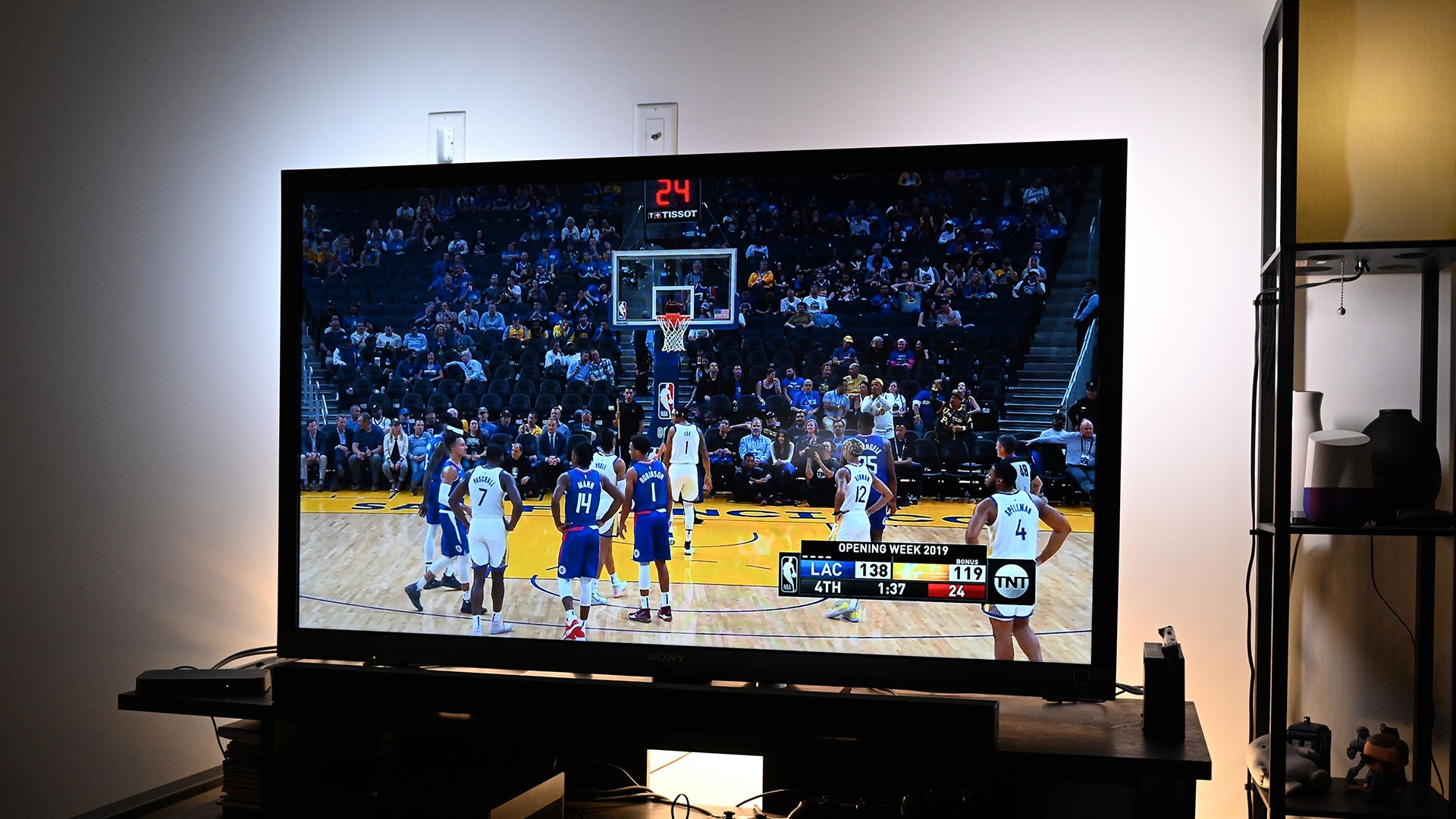 Based on some comments online, there are also a handful of users who noted that Sync Box would simply stop syncing after a few hours, which left lights frozen in their last colour configuration. While this didn’t happen to me, I did run into a situation where after turning on my TV and having the Sync Box automatically turn on, my Hue lights just wouldn’t sync. This was easily remedied by restarting the Sync Box (either manually or through an option in the Hue Sync app), and while this only happened twice over two weeks, it’d be nicer if the system never froze at all.

Also, and this isn’t really a problem for the Sync Box itself, but commercials really take away from having your lights synced to your content, as most ads have seem to have bright white backgrounds. Bleh.

To Sync or not to Sync

While the Hue Synx box is occasionally clunky and lacks support for HDR passthrough, I really appreciate its ability to elevate my home movie-watching experience. Is it expensive? Yes, particularly for something that only exists to make your lights a bit more colourful. And even for simple media centres, the Sync Box requires a fair bit of tinkering to dial everything in just right. 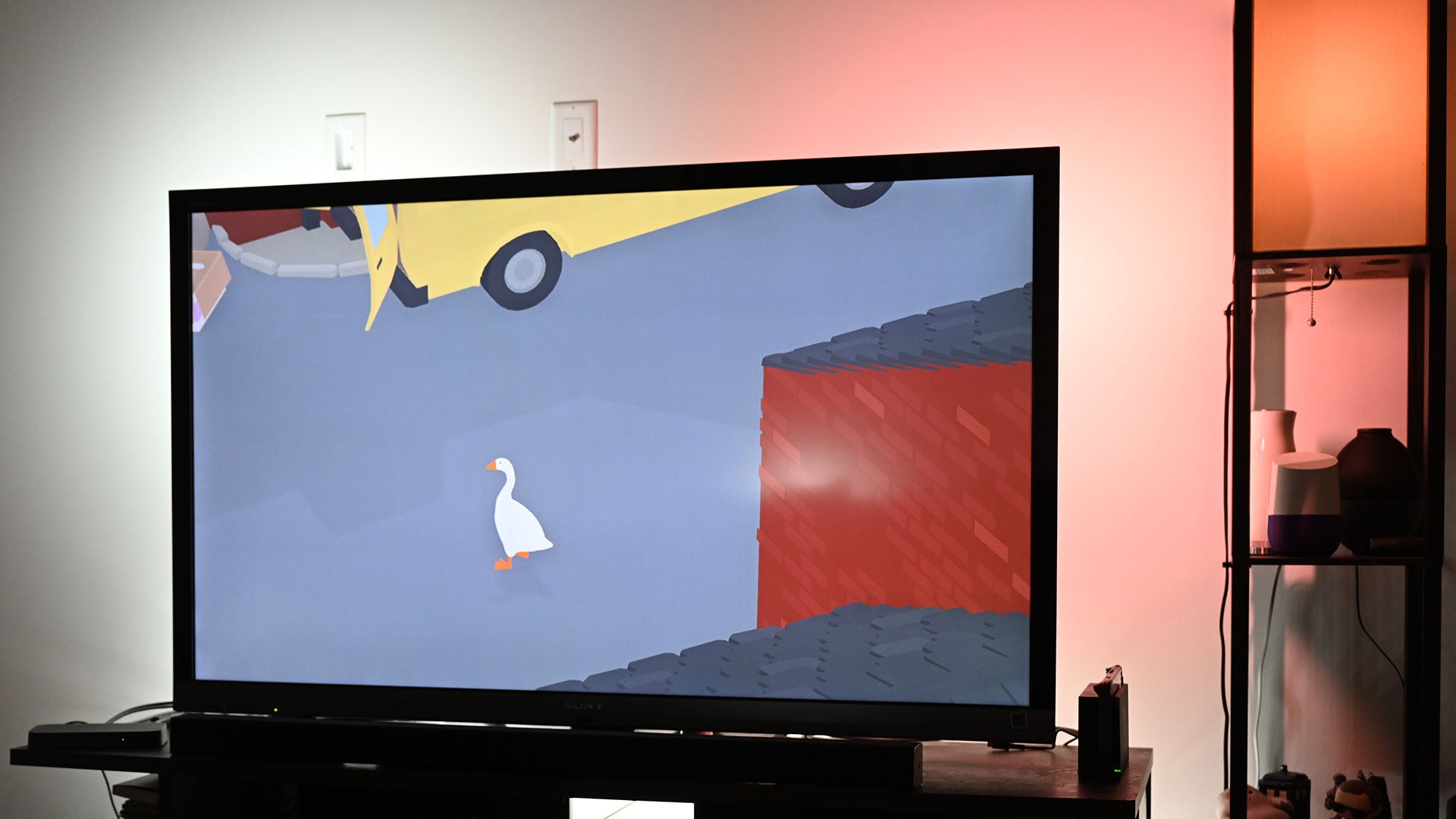 But as more and more people embrace the living rooms instead of movie theatres as their ideal video watching environment, some flash in the living room is welcome. The Sync Box is a delightful way to get even more mileage out of your Hue lights. No one really needs it, but for people looking to really deck out their smart home, this tiny box packs big technicolor fun.