â€œWait a minute. Holy shit,â€ I said out loud in near-total disbelief as I walked up to my friend and Gizmodo contributor William Clavey as he started up the new BMW M235i Gran Coupe. I was not expecting a bellowing and cracking exhaust note I could hear from 20 feet away. â€œThat was you? Thatâ€™s what it sounds like?â€

Yet on a brief drive where I went in with low expectations, the newest and smallest member of BMWâ€™s sedan family ended up being full of surprises. Good ones. Granted, thereâ€™s a lot to like about the M235iâ€™s 301 horsepower rating, but thatâ€™s just the tip of the iceberg.

(Full Disclosure: BMW flew me down to Spartanburg, South Carolina for Test Fest, where it hands auto writers the keys to almost its entire lineup and lets us do basically whatever we want. Nobody crashed or died, as far as I know. BMW also paid for my food, hotel and booze.)

Did you know that these days, crossovers and SUVs (or Sport Activity Vehicles, as theyâ€™re called there) make up 58 per cent of BMWâ€™s total business? Weâ€™re firmly in a world where trucks and hatchback on stilts are, simply put, the norm. The people want big vehicles, and they want to ride up high in them. Even if those vehicles run on electricity.

Still, BMW says that small cars and sedans are still viable as an entry-level product. They make enough money in the four-door segment that itâ€™s still worth doing. Besides, Audi has the A3, and Mercedes has both the A-Class and the CLA in America now. That sort of aggression just canâ€™t be allowed to stand in the German Luxury Car War of Attrition. BMW used to try and compete in this class with the 320i, which we liked so much in cheap, manual transmission form we, uh, named it after ourselves. (It seemed like a good idea at the time? I dunno. Go ask Matt Hardigree.) But that car and its somewhat anemic 180 HP went out with the last generation F30 3 Series.

This car, BMWâ€™s new entry sedan, is much closer in concept to the aforementioned A3 and CLAâ€”though itâ€™s given the confusing name of 2 Series Gran Coupe.

Letâ€™s be clear about one thing: this is not the same car as the rear- or all-wheel drive 2 Series that everyone loves, the coupe thatâ€™s spawned beloved enthusiast hits like the M2 Competition. The car has the same number but it rides on a totally different platform. Here, you get the FWD-based UKL platform used on various Mini models.

This, unfortunately, means it suffers from proportions that just scream â€œeconomy car.â€ That and its humble underpinnings may enough to chase off plenty of purists. Thing is, theyâ€™re missing out. At least in top-trim form, the 2 Series GC is actually a blast to drive. 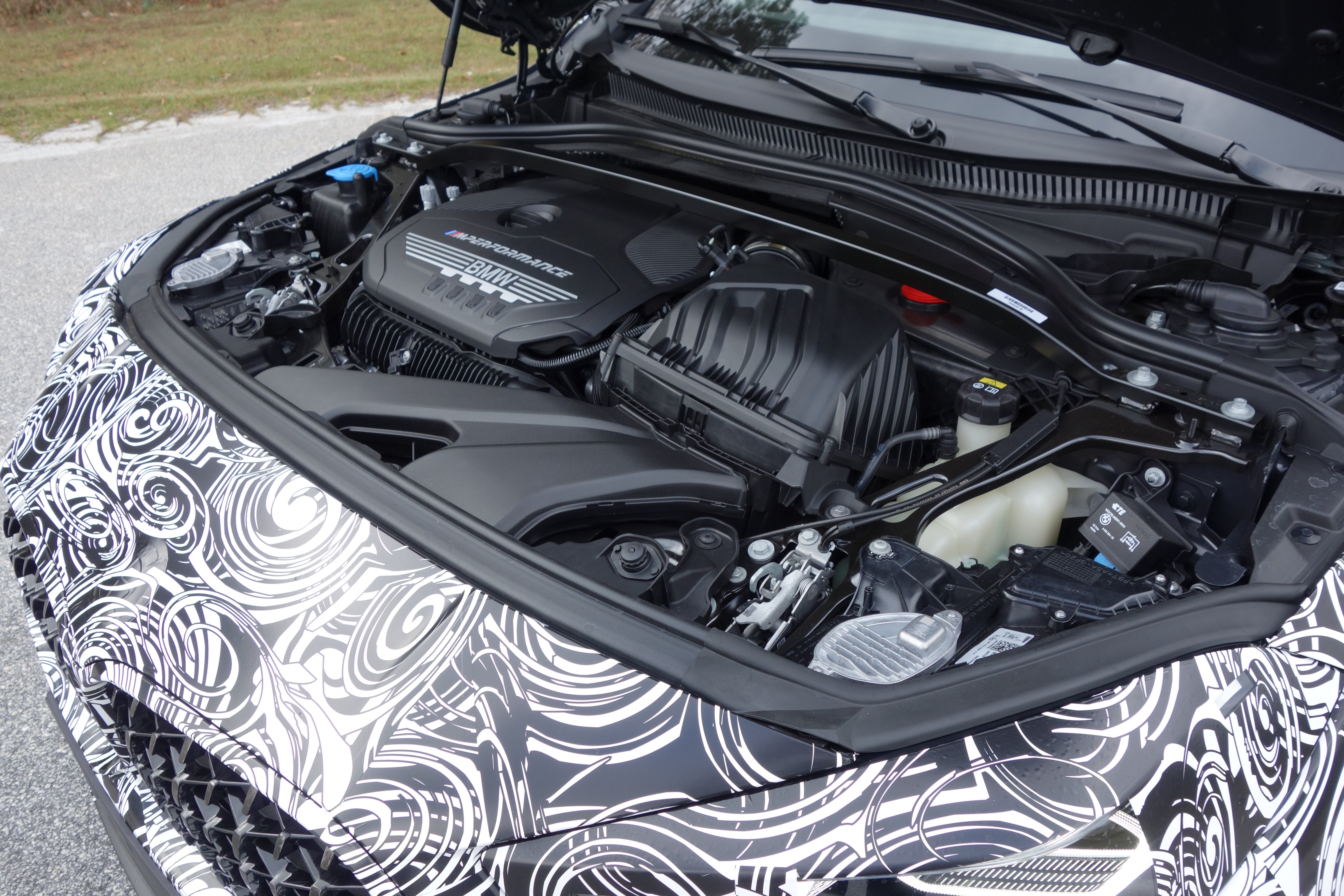 Iâ€™ll note that at Test Fest, we sampled a pre-production carâ€”hence the camo, more to cover up unsightly development holes and marks than to hide its identity from the good people of Spartanburg, South Carolina. That means it might not be 100 per cent like the car youâ€™d end up buying, but we were told it was very close to final spec. Regardless, an official verdict comes when the production model gets tested. 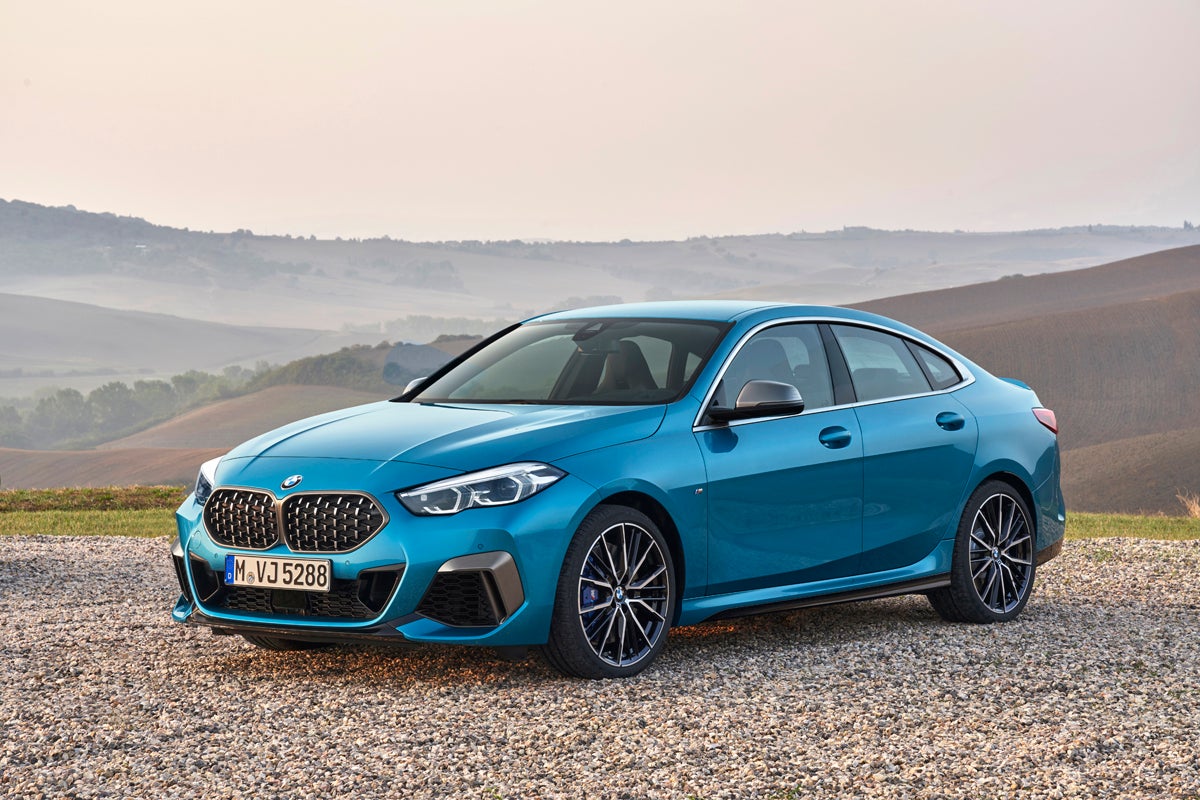 The 2GC without any camo. (Photo: BMW)

Do you like the E46 3 Series of the 2000s? Was it, to you, the last â€œgoodâ€ BMW? The 2GC at least boasts a footprint thatâ€™s incredibly similar to the E46 sedan; its length, width and wheelbase are all within one or two inches of that car. Clearly BMW wants to target sedan buyers who think the 3 Series has just gotten too big. And it kind of has. While thereâ€™s too much front overhang and the profile is awkwardâ€”Iâ€™ve said it looks too much like a Ford Focus and I stand by thatâ€”the important thing is this little thing does not drive like an economy car. And as much as I enjoy Mini Coopers, having owned two myself, the 2GC has a character all its own.

Out on the winding back roads that Clavey and I found near BMWâ€™s factory, the car proved to be both agile and plantedâ€”as playful as it was direct and predictable. Itâ€™s less like a Mini and more like a legitimate Volkswagen Golf R or Audi S3 competitor, done up BMW style. Or a grown-up Subaru WRX, maybe. BMWâ€™s current all-wheel drive systems happen to be extremely good, and as such, we found only a slight amount of front bias at work. On the M235i you get a 2.0-litre turbocharged inline four-cylinder good for 301 HP and 332 lb-ft of torque. Itâ€™s the same motor and output as some of the new Mini JCW models, and it finally gives those cars the spice theyâ€™ve needed for years. On the BMW sedan, the motor is an eager partner in shenanigans, providing lots of low-end torque and a hard, linear charge to redline.

With the â€œShadowlineâ€ package, or M Performance package as itâ€™s called in other markets, the M235i GC will do zero to 60 mph in 4.6 seconds. Not bad at all. And those bursts of speed are accompanied by a pretty raucous exhaust note, as well as some nice work by the eight-speed paddle-shift automatic.

I didnâ€™t get as much time as I wouldâ€™ve liked, and I think weâ€™ll get more when the production car launches, but I can say that if youâ€™ve ever driven a Golf R or Audi S3, you get the idea here. Theyâ€™re very similar. Except the BMW boasts more torque, a smoother gearbox and is, as near as I can tell, quite a bit louder from the factory. Itâ€™s also not as uncouth and unhinged as the last-generation CLA45 AMG was, although I havenâ€™t driven the latest A-Class or CLA and so I canâ€™t speak to how much the model has improved. We were pretty impressed by the inside, too, where the GC boasts touches like BMWâ€™s excellent latest iteration of iDrive, a digital display suite and light-up door trim. It doesnâ€™t ever feel cheap in any way.

But I donâ€™t expect it to be cheap in top trim, either. Pricing hasnâ€™t been announced yet, and it wonâ€™t be until closer to the carâ€™s launch in March. But like Edmunds, Iâ€™m anticipating the mid-$45,000 range for the base 228i and the mid-$60,000 range for the M235i. That would put it pretty squarely in the sights of the Audi A3 and S3 itâ€™s clearly targeting. (Other variants with smaller engines, diesel power and manual gearboxes will be available in global markets.) I do suspect most people who buy this car will opt for the 228i, which also packs a 2.0-litre turbo four, AWD and as much horsepower as its own name. I didnâ€™t get to drive that at Test Fest, but I have a hard time believing it will be a snoozer. And I doubt most of those people will care about what platform itâ€™s on.

Will the BMW purists accept the M235i? Can they be made to see itâ€™s a more premium step up from something like a WRX, a Ford Focus ST or even a Mini Cooper S? Iâ€™ll withhold final judgment until I drive the real thing, and I still canâ€™t get past those looks.

But for people willing to put platform snobbery aside, I think theyâ€™ll be on board with something that seems to be more fun than any of us gave it credit for initially. 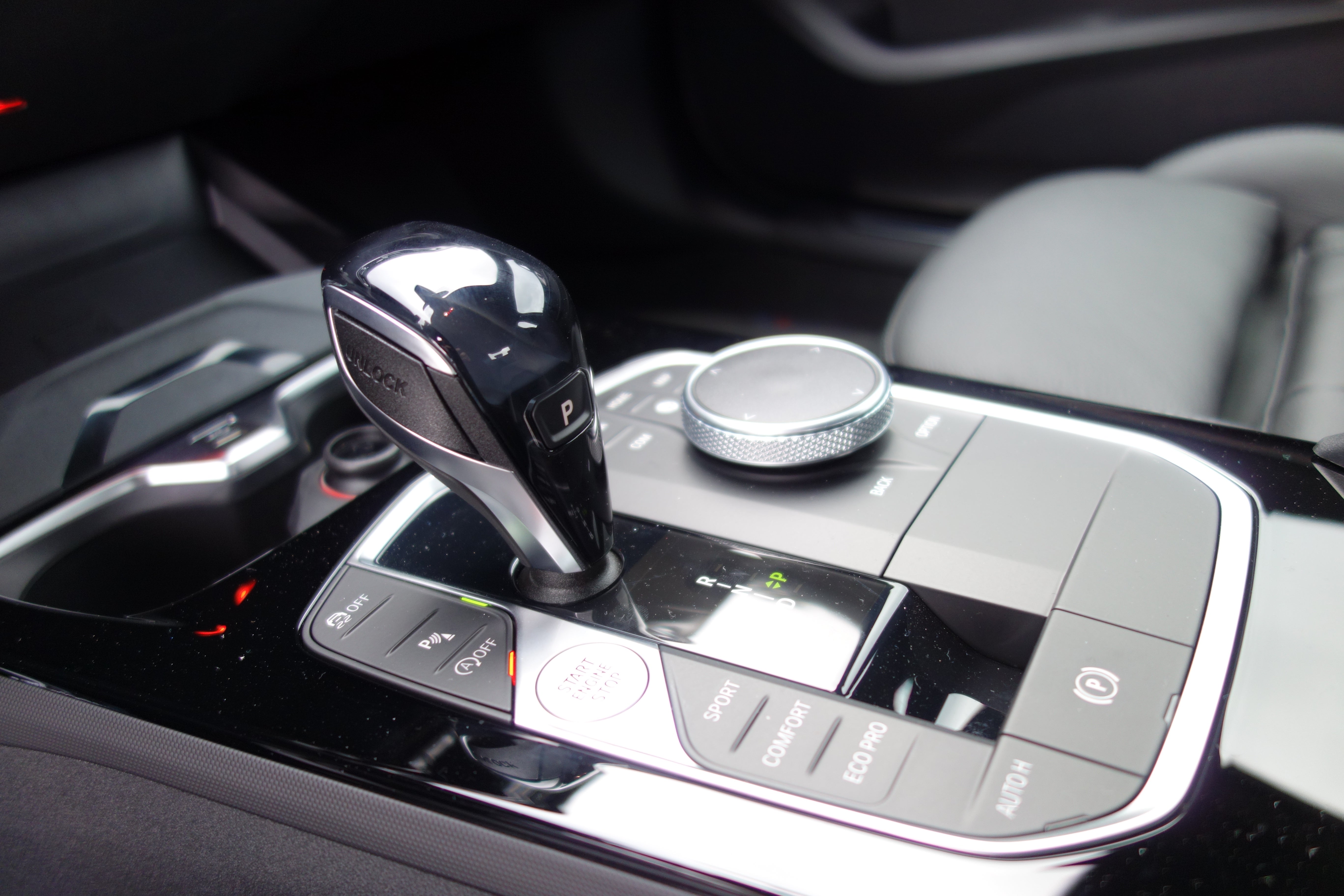 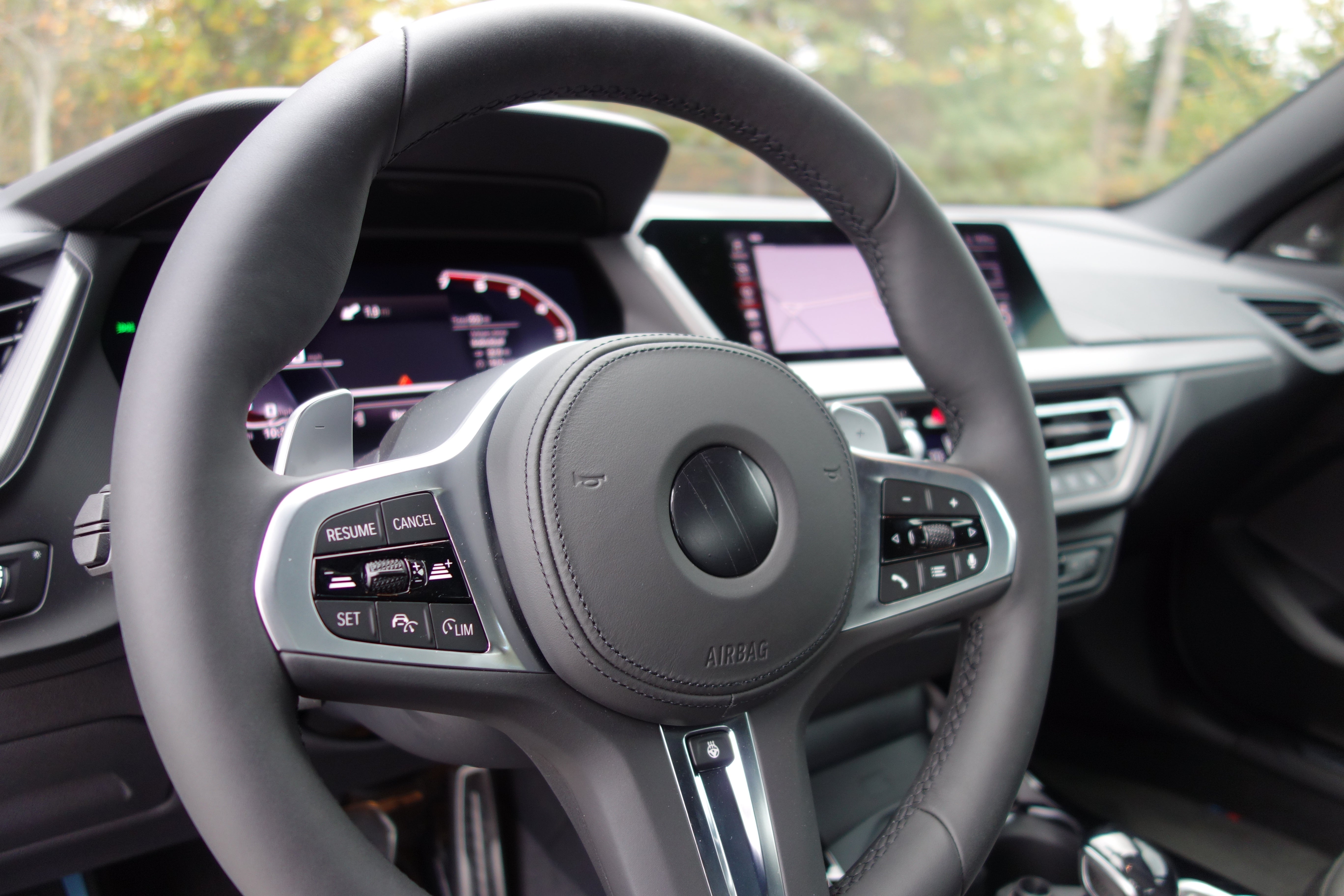