The Diesel Manual First-Gen Volkswagen Touareg Is What Off-Road Dreams Are...

NBN Co is Finally Upgrading Half the FTTN Network to Full...

The X-Men’s New Dawn Is Hiding A Terrible Truth 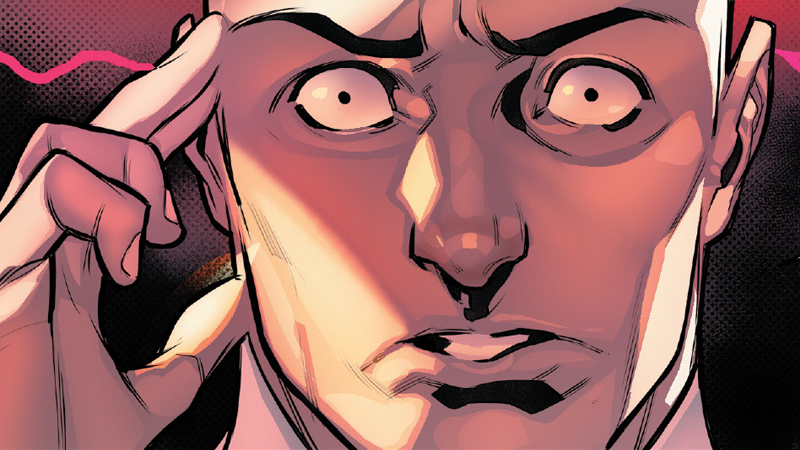 Last week, House of X came to an end with its eyes toward the stars, a glimmer of hope in the face of a new age. This week, Powers of X comes to an end too, and adds a dark context to Jonathan Hickman’s already-fascinating time with the X-Men.

If House of X #6 was a hopeful herald of the new dawn of X-Men books that will follow this incredible event series, Powers of X #6 — for one last time, by the superstar team of Jonathan Hickman, R.B. Silva, Pepe Larraz, Marte Gracia, David Curiel, Clayton Cowles, and Tom Muller — exists to temper that new dawn in the crucible of context. Because, it turns out, all has not been as it seems in the many lives of Moira MacTaggert. And with the full picture unveiled, we learn a terrible truth that threatens to undercut all that she, Charles Xavier, and Magneto have worked for.

Powers of X #6 is built around the revelation of three key truths. The first is relatively minor in the grand scheme of things. The reason Moira X has been hiding away in her own no-space, connected only by a secret chamber deep within Krakoa’s tangled roots away from her fellow mutants, is that at this point in the timeline, she fears she has been too active in her influence of the current age that has brought about mutantkind’s latest attempt at a sovereign nation. Having faked her death — not through a husk born of mutantkind’s new capacity to resurrect their own, but a Shi’ar golem — Moira has spent much of her 10th life in the shadows, known only to Professor X and Magneto as a living manipulator of all that has been laid out.

Moira’s reasoning for this return to secrecy is rooted in precognitive mutants, who she refuses to give a place to on Krakoa — including Destiny, who has yet to be revived from her own death in the long and winding timeline that is X-Men continuity by the Five, despite the fact that Charles and Xavier have won the seeming trust of Mystique with the promise to return her to life. It’s not just Moira’s brutal past with Destiny that shapes her choice, however. It’s a fear of what those who can see the future will uncover.

The truth. A truth already shared to Charles and Erik, and a truth that nearly broke them — a truth that will break everything they have built on Krakoa if it ever got out. 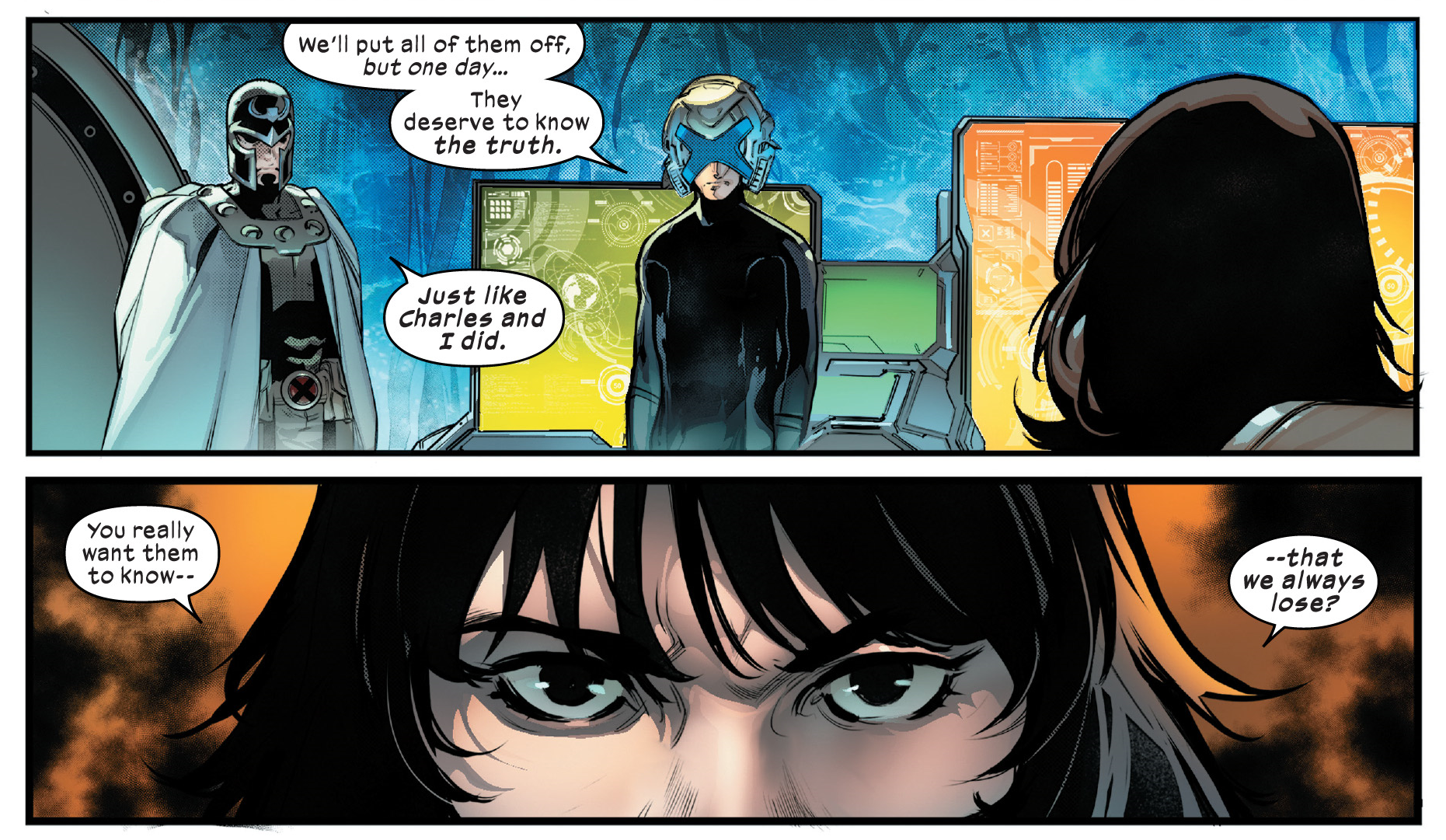 Mutantkind loses. This timeline, the next, the one after that, no matter what Moira has done, no matter what price has been paid already, no matter what seeming apocalypse has already been averted. They lose. Even in this new life, where she has broken all the rules, and accomplished things that no mutant could ever be thought accomplished — a recognised sovereign state, a unity among not jut mutants we would consider heroes but the ones we consider villains too, for the good of their entire race — mutantkind will lose.

It’s not to the machines — it seems, for now, they may have subverted at least that dark fate. It’s not even to man, who as we’ve seen is set to herald a future where what defines humanity is an incredibly fluid concept. If mutantkind is the evolutionary apex of Earth itself, a natural counterpoint to humanity’s own growth, then what can they not comprehend to compete with? 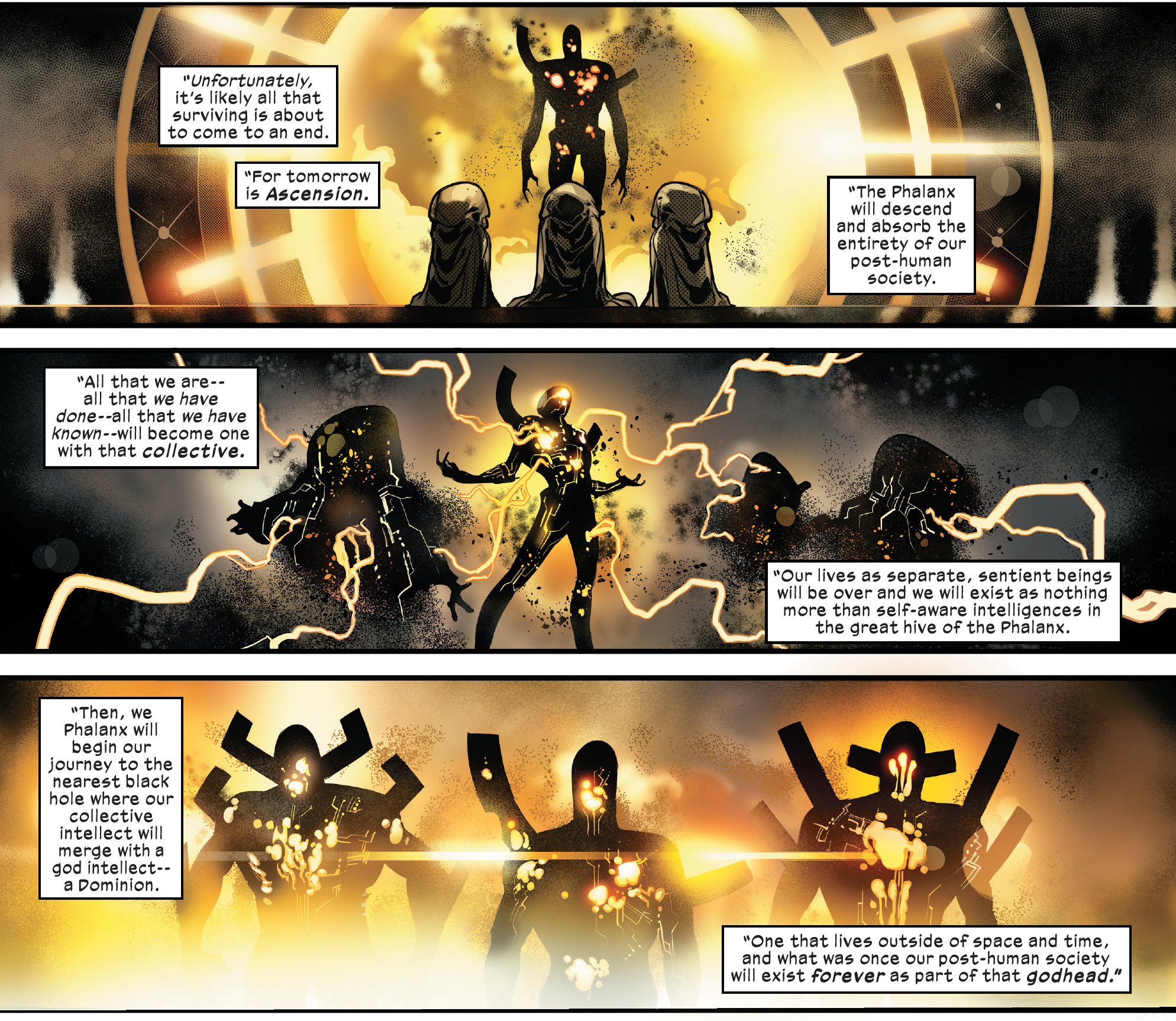 That’s the twofold gutpunch of this second truth, revealed in flash-forwards to Powers of X’s far-flung X³ timeline. Ever since it began unfolding, we’ve been led by this series to make the assumption that X³ is the endgame Moira’s audacious manipulation will lead to. A post-future where, with the aid of the mysterious Librarian and the X-Men’s cosmically mechanical foes the Phalanx, the living memory of mutandtdom will merge with machine and be freed. Free of their bodies, free to transcend to a new, almost incomprehensible level of existence — at one with the very fabric of the cosmos itself.

It’s not the endgame at all, as it turns out. It’s not freedom, as the Librarian’s true plan is revealed — he’s not trying to save mutantkind. He never was. He’s imprisoned them. The Librarian and his people are trying to ascend to godhood, using the imprisoned archive of mutant memory in the Worldmind (save for a captive Moira and Logan, those mysterious beings glimpsed at the very end of Powers of X #1 all those weeks ago) to draw the attention of the Phalanx as a stepping stone. Because, in actual fact, he is already beyond them. The Librarian’s species is finally revealed as Homo Novissima. 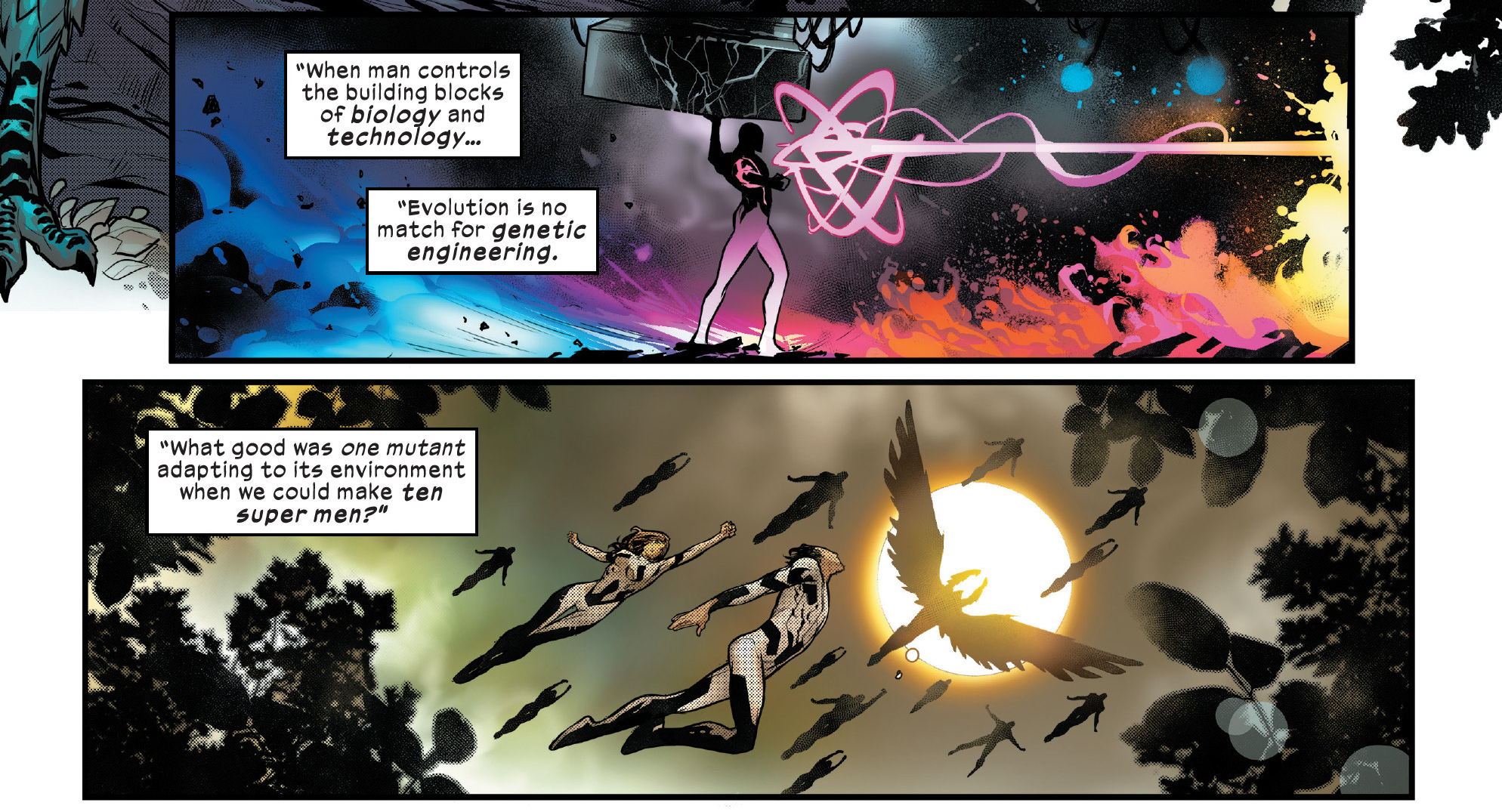 If mutants are Homo Superior — the apex evolution of what humankind is — then Novissima is a fork in the genetic road, a post-human realisation where humanity has, through genetic manipulation and technology, taken hold of its own biological path. An evolutionary destiny beyond the apex of Homo Superior to create something new, and powerful, and victorious over humanity’s long time foe, its almighty, all-powerful evolutionary counterpart. In the X³, Novissima has won, and is on the path to godhood while all that is left of mutantkind is consumed as fodder to fuel that transcendence.

But for all the twists and truths already being thrown at us in this issue, its third and final truth is the chance the X-Men need in this sea of despair. Because, after the Librarian revels in his plan to Moira and Logan in his garden of imprisoned mutants, it turns out X³ isn’t the endgame. As the Librarian leaves to await transcendence, having cockily given his apparent lessers a chance in the gift of knowledge — of knowing Homo Novissima’s plan — Logan kills him. Then he calmly turns to Moira, and has he has done so before, guts her with claws. He’s the best at what he does, forever and always. (Image: R.B. Silva, Pepe Larraz, Marte Gracia, and David Curiel, Marvel Comics)

Because X³ wasn’t the future. It was a future. It was the sixth, previously unrevealed life of Moira MacTaggart, and unbeknown to us, it’s already been influencing everything we’ve seen in her 10th life, revealed in her very own journal. The miraculous flowers of Krakoa, being given as gifts to humankind to accelerate their lives, cure disease, and eradicate mental defects? They’re meant to keep humanity docile, away from needing to manipulate its own genetic legacy on the path to what would become post-human. Her breaking down of Charles’ optimism for co-operation is intended not just to forge him into the champion of mutantkind she needs to unite her species, but to break him of the idea that humanity could ever cooperate with a species whose destiny is to forever be their better.

In many ways, however, this context — as bleak as it is — just makes the hope Charles and Erik feel at the issue’s end, their defiance, shine that much brighter. They knew the truth we as the audience now know too, and hoped anyway. They knew that Moira has doubts about their zeal — about their willingness to change, about whether or not her many lives of breaking down who these men have been, who they are, and who they will become, in order to save the entirety of mutantkind. They hoped anyway.

The have been told the X-Men will lose. That they will always lose, that, for all the cycles, for all the alternatives, that mutankind’s future perpetually lies in defeat and persecution. But Charles Xavier and Erik Lensherr still believe they can win — and as the dawn of brave new age of X-Men storytelling begins in earnest, they are ready to fight a battle unlike any they’ve seen before to maintain that belief. 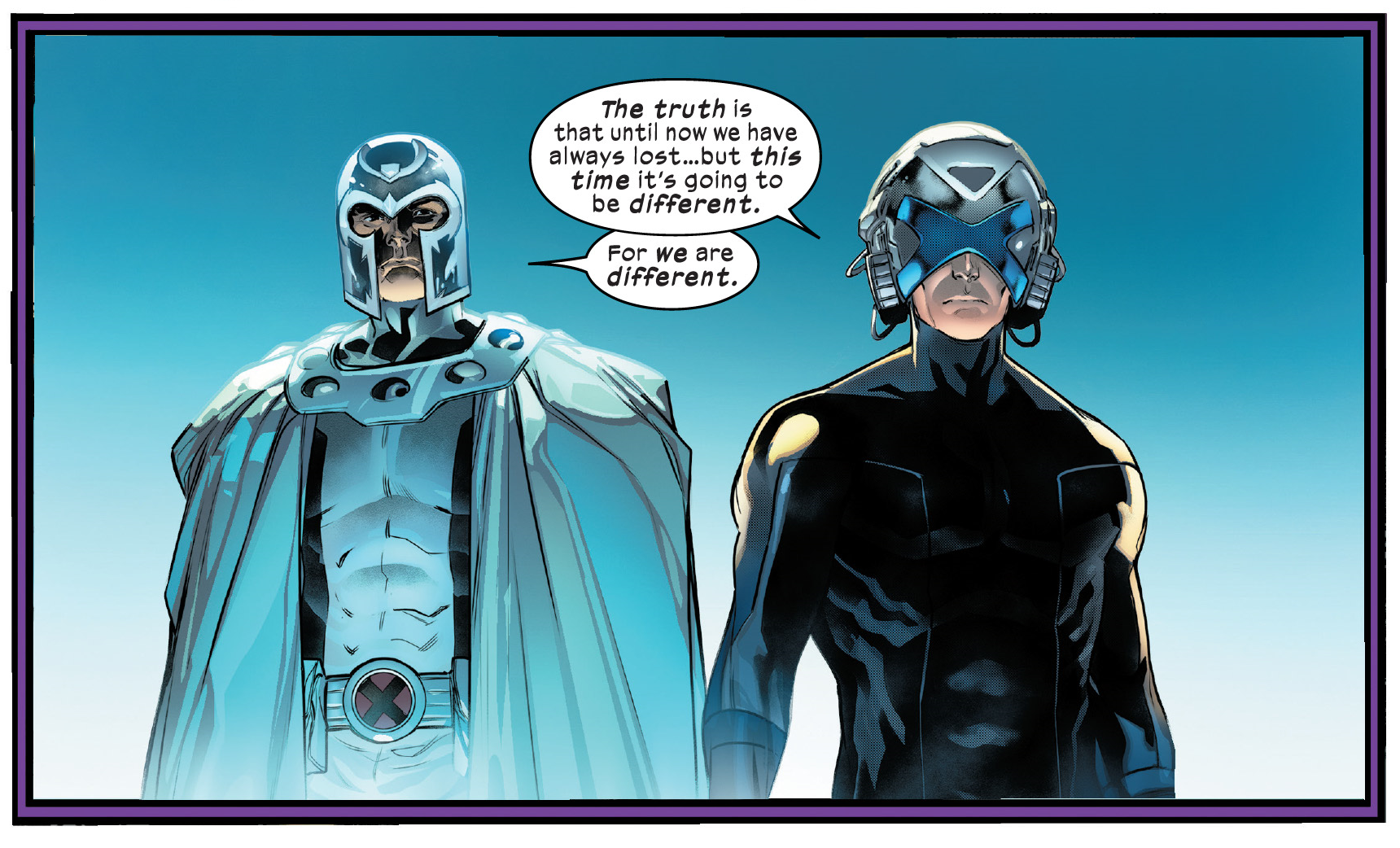 After all, as we’ve learned previously in this duology, this is who the X-Men really are. Unabashedly themselves, in spite of it all. Unabashedly hopeful.

They’ll need to be, to fight the greatest threat the X-Men have ever faced, in this life or the next.