Hasbro’s New Darth Vader Figure Is Most Impressive, And Most Frustrating 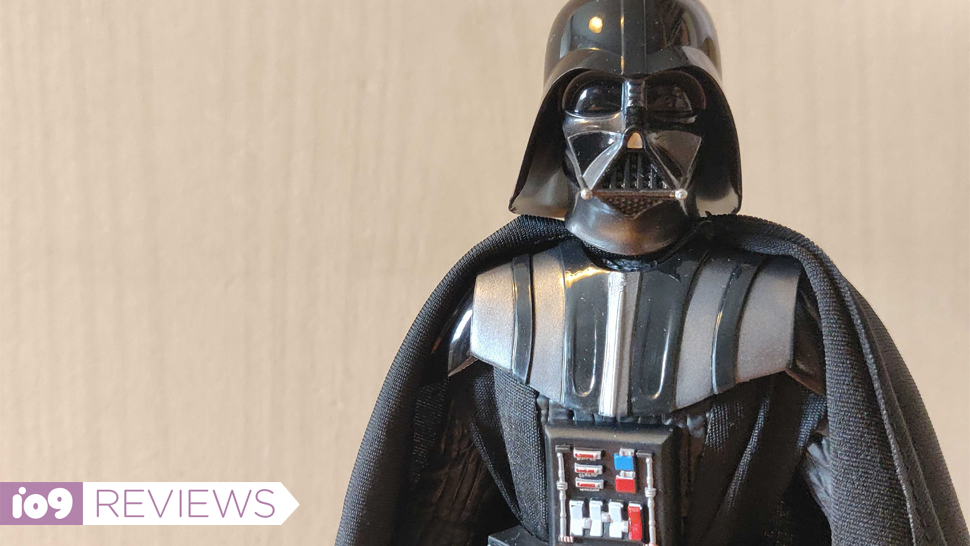 Hasbro has been making awesome Star Wars action figures for decades at this point. But it’s kicking off a new range of figures in the galaxy far, far away called “Hyperreal” that are something totally new for the toymaker. It’s definitely filled with new surprises…both great and not so great.


If the last time you truly dove deep in a Star Wars action figure owning habit was either when you had to mail away a box to get your own little telescoping-lightsaber Obi-Wan, or maybe even when Luke Skywalker looked a little more like He-Man than he did Mark Hamill, you might be surprised at just what Star Wars figures are capable of these days. Now, whether you’re buying things in that classic 3.75″ scale or even the 6″ size that’s come to dominate action figures at large, Star Wars figures are more articulated, more detailed, and generally better than ever. So what can make a new figure like this Hyperreal Darth Vader (full disclosure: a sample of the figure was provided by Hasbro for review) stand out, let alone worth of a nonsense buzzword name like “Hyperreal”? A comparison between the 15cm-scaled Black Series Hoth Leia, the 20cm-scaled Hyperreal Darth Vader, and the 30cm scaled Hot Toys Hoth Leia. Sorry, I don’t have a Hot Toys Vader at all—I’m not made of money—and I couldn’t find my Black Series Vader, so you get his daughter instead. Close enough? (Photo: James Whitbrook/io9)

For starters, this Vader clocks in at around 20cm tall, an entirely new scale for Hasbro that’s significantly larger than most of their current offerings (only the value-priced “Hero Series” figures, which come in at 12″, are larger). It needs to be that big so Hasbro can do two more things in the hope of earning that new moniker: one is an unprecendented level of detail and material manufacturing, using not just plastic but fabric and, in Vader’s case, rubberised latex to capture the details of his suit as closely to the movies as possible—if you’re the sort of Star Wars fan that takes notes of these kinds of details, this is specifically meant to be based on Vader’s suit as seen in Empire Strikes Back.

The other is that, unlike Hasbro’s other Star Wars figures, the Hyperreal Darth Vader is built around an internal, metal skeleton. The armature is almost similar to something you’d see inside a claymation puppet or a maquette, as articulated, if not moreso than the average Black Series figure, but completely hidden by the design and material work of the figure itself. In future Hyperreal toys, it’ll be hidden by a complete skinsuit. As Vader is already clad entirely in armour and clothing, it’s already easy to obscure, but the effect is immediate to the eyes: you don’t see the joints and seamlines you would on a normal action figure that immediately demarcate it in your mind as a toy. It’s just…Darth Vader. He’s there, on your desk, as if he’d stepped right out of the movies. Give the Dark Lord a Hand, folks. (Photo: James Whitbrook/io9)

And that’s really the grand success of this action figure. Hasbro’s work with the Black Series line—while having come leaps and bounds in recent years with more accurate sculpts and facepaints—has been laudable, it’s praise that often silently includes the suffix “…for a $US20 ($30) toy.” The Hyperreal Vader is a step so far beyond that, thanks to the incredibly painstaking detail afforded not just by the mixed materials used all over the figure and the seamless nature of the interior armature, but the sheer quality of the sculpting and paintwork itself. There’s enough trickery going on here that my desktop, phone-camera pictures of it don’t really do the effect justice: It’s Darth Vader, as he lives and laboredly breathes. It looks stunning. It might not quite be “hyper” real, but it’s real enough to work.

But while the armature is key to the Hyperreal Vader’s success as a thing to look at, it’s also the reason that makes the figure also so frustrating: it is a pain in the arse to actually move this toy about. 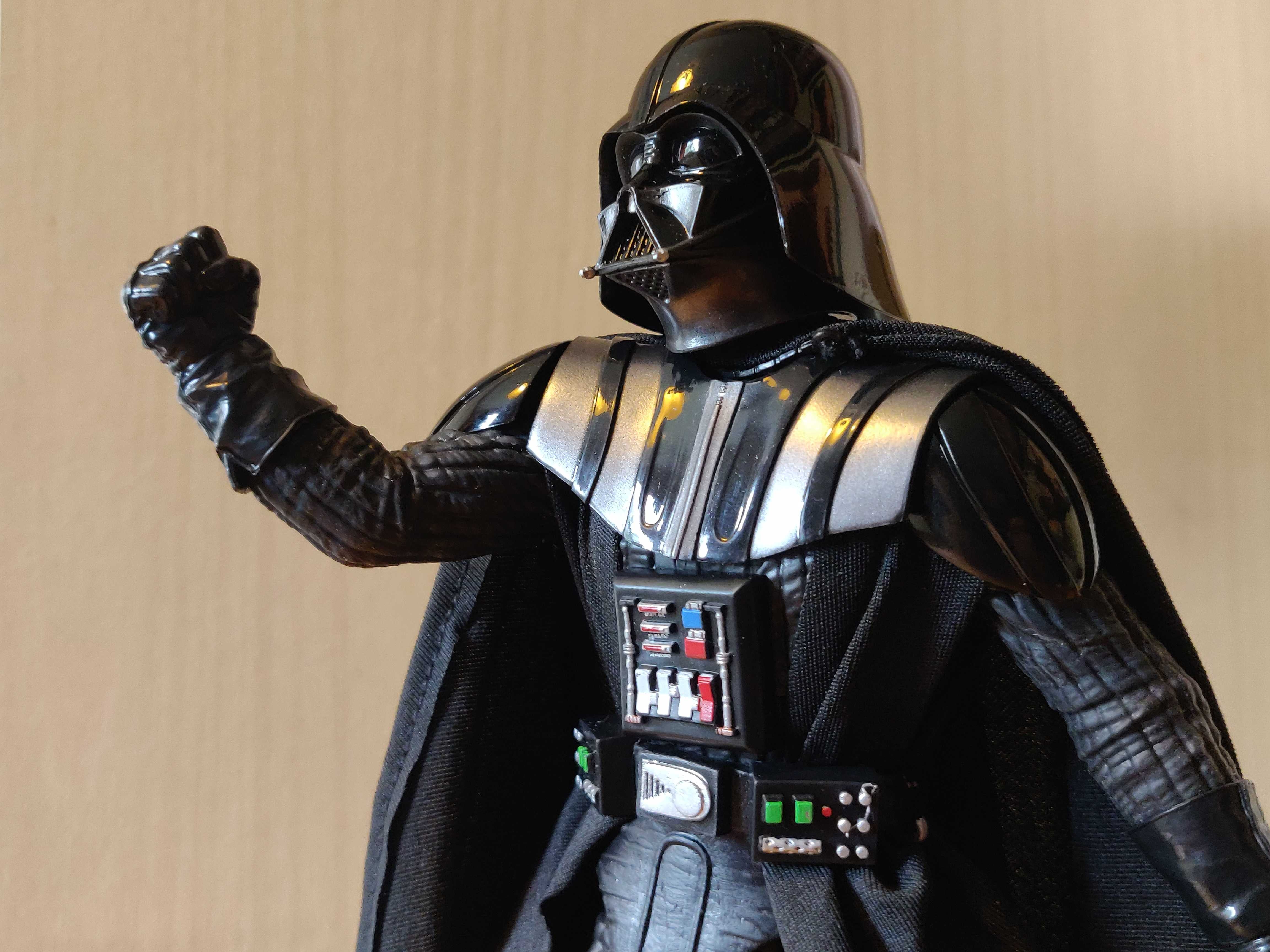 The detail on this Vader is remarkable. (Photo: James Whitbrook/io9) 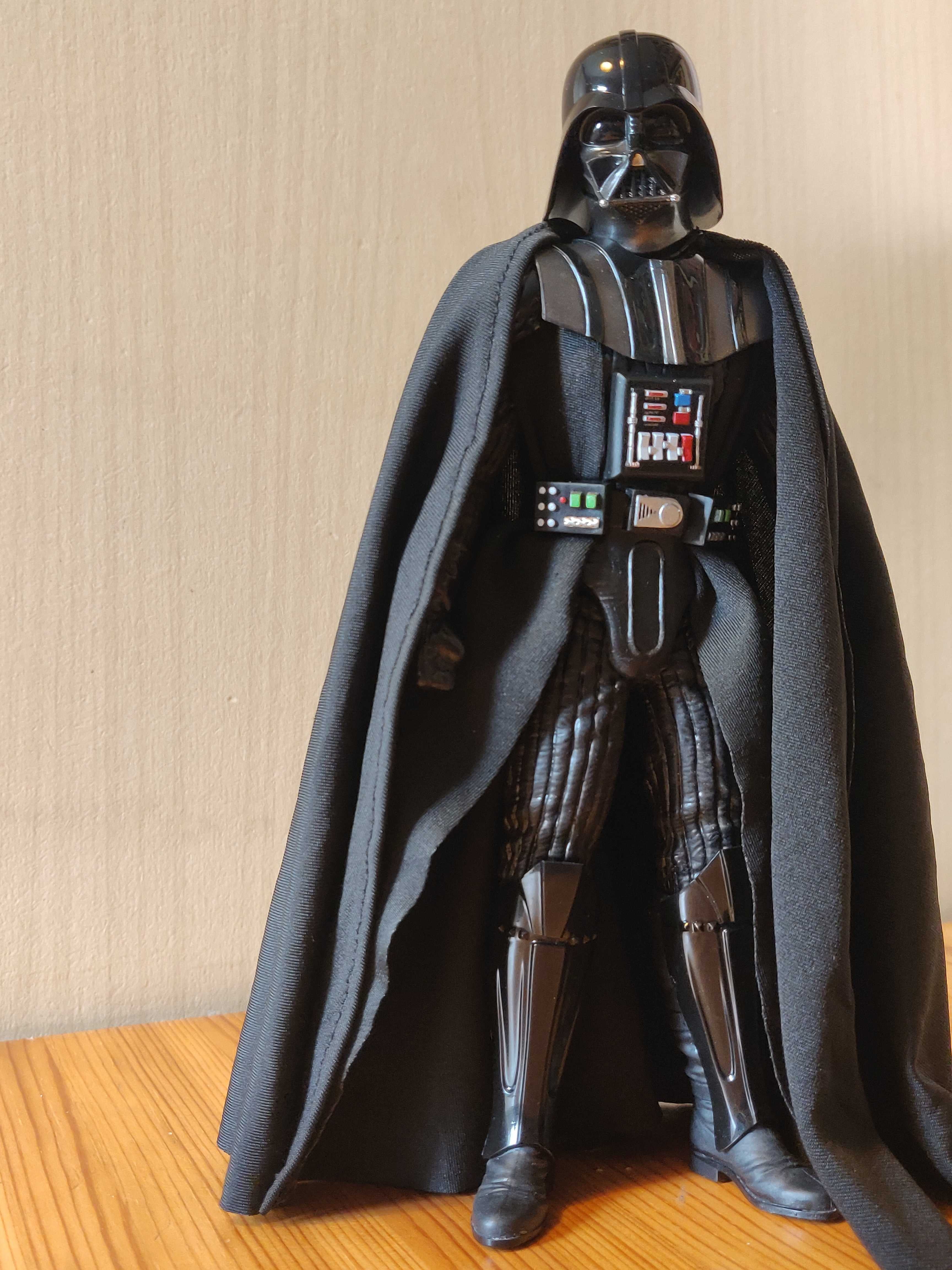 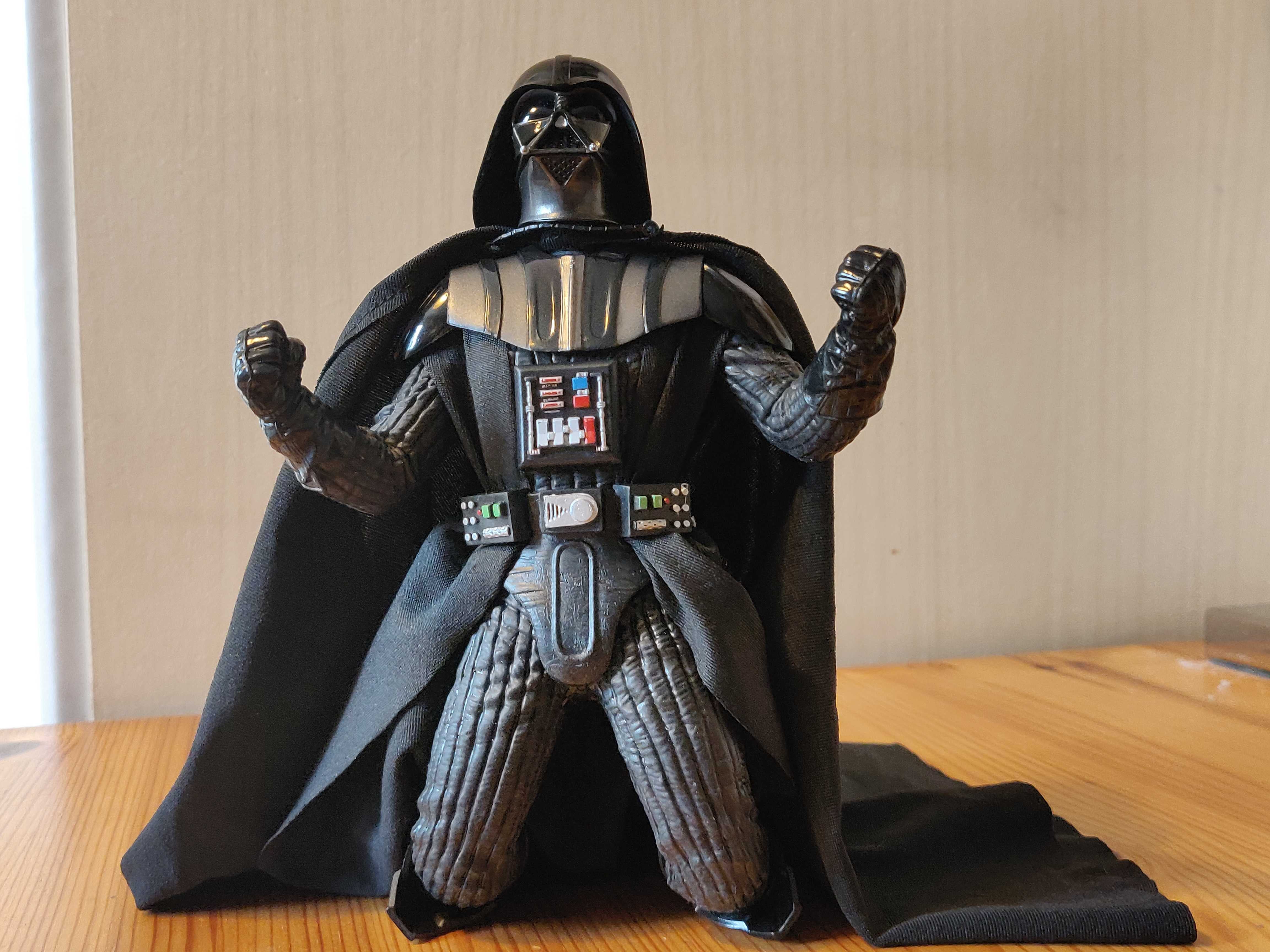 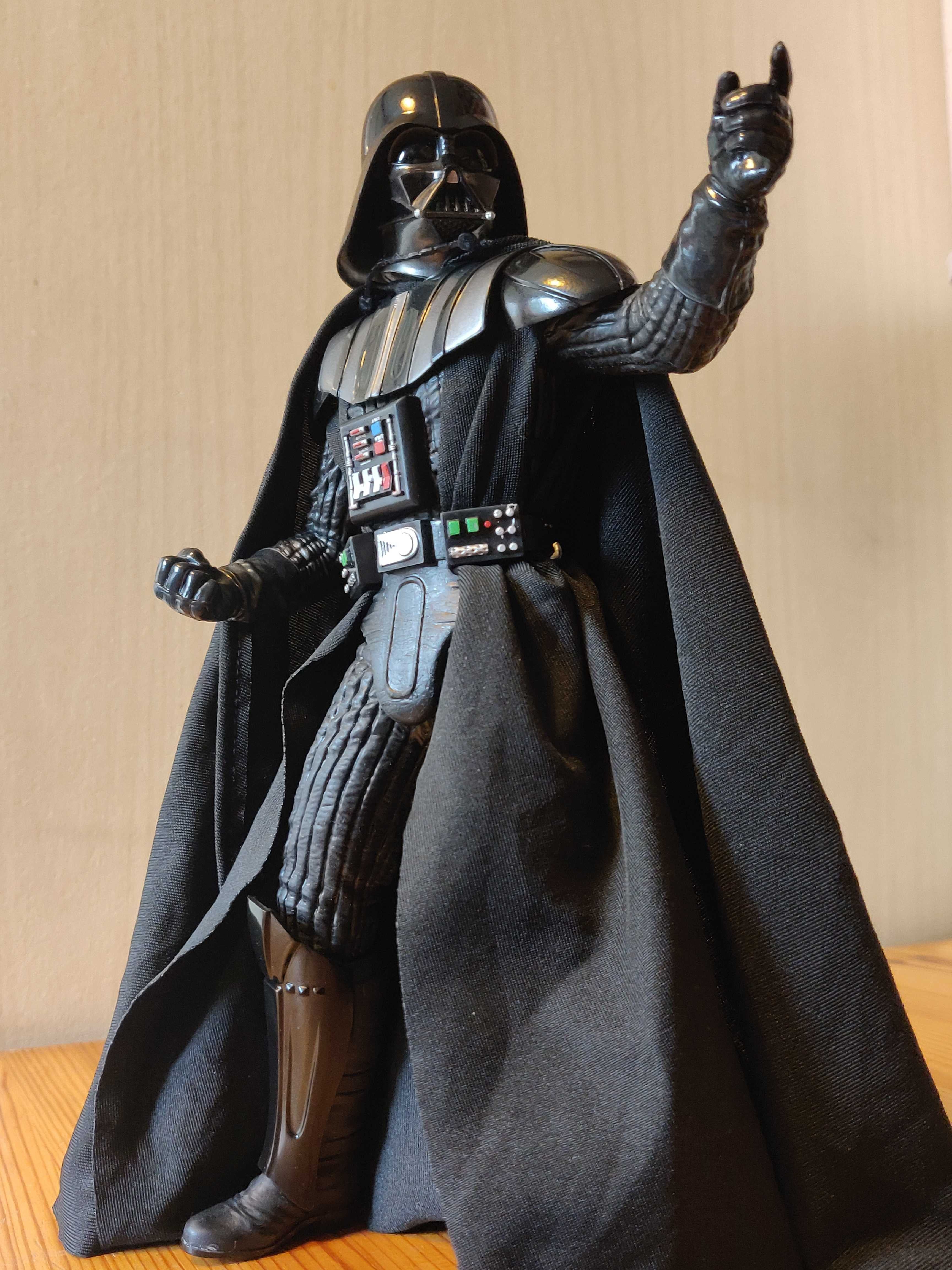 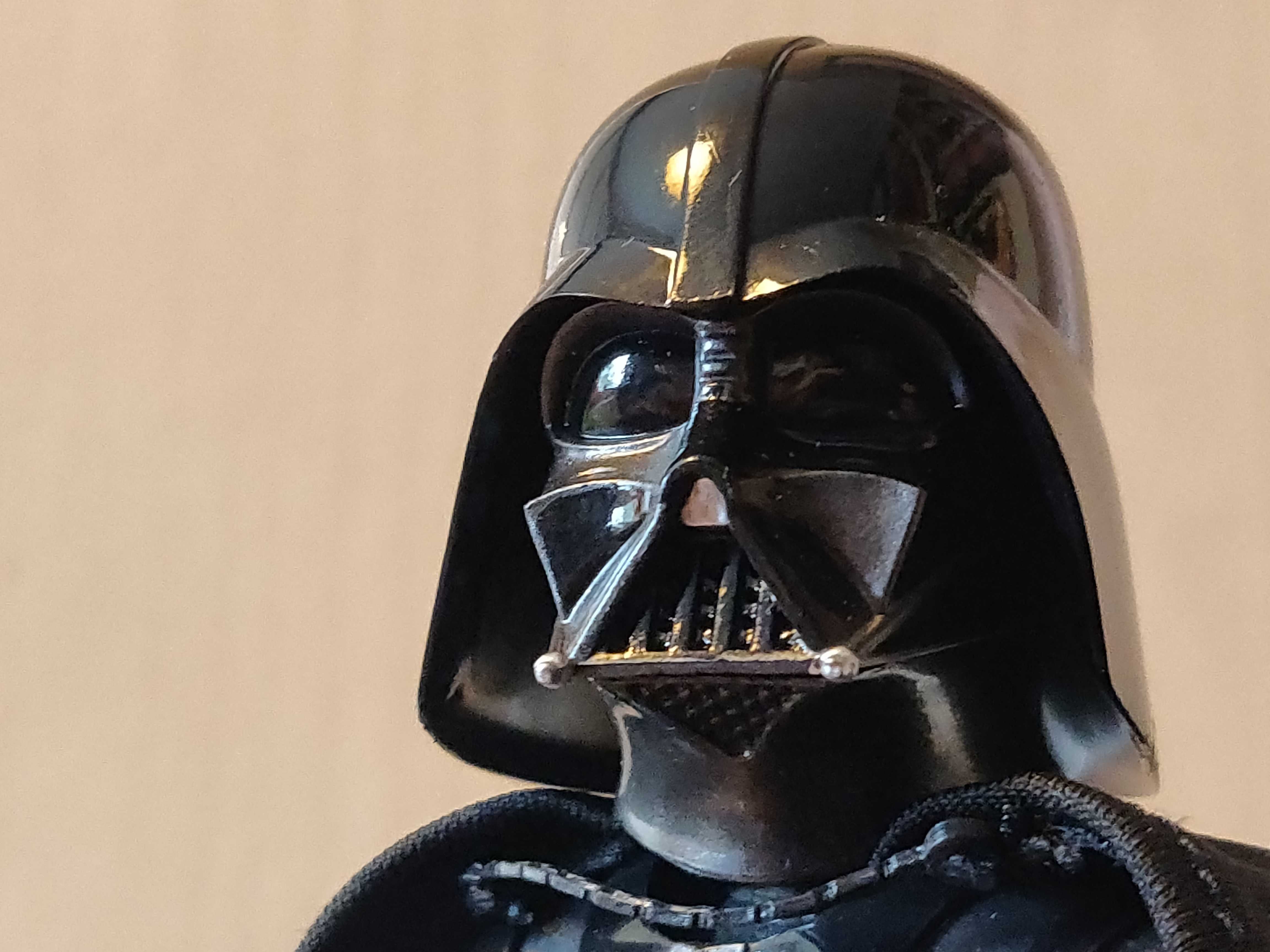 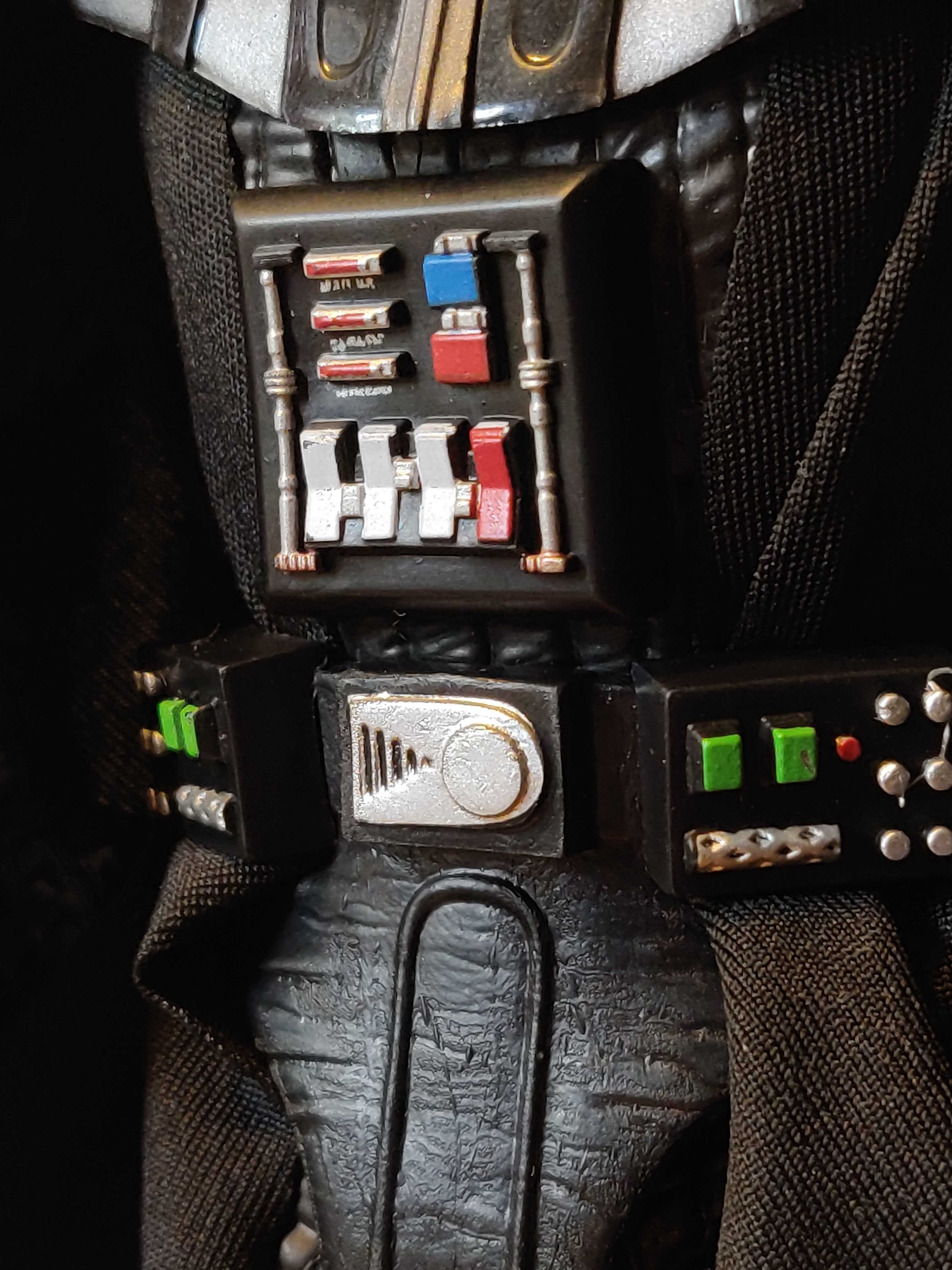 Being made of metal, and Vader himself clad in chunky, stretchy materials, trying to move any point of articulation on Vader’s body that isn’t his neck is an exercise in an awkward application of force and fiddling that doing any kind of pose that isn’t him standing there looking ominous (which, to be fair, you’re gonna do that with a Darth Vader figure) is an exercise in…well, not being really worth it. The joints are painfully stiff, restricting their movement before you even account for the bulkiness of the materials Vader is made up of getting in the way, and compounding that restrictiveness even further. And because all the articulation is unseen, you can’t quickly see the particular way a joint is bent or rotated for easy tweaking like you could with a normal action figure. With enough patience you can coax him into a range of poses, from kneeling to powerfully slicing away with his lightsaber, but the fuss it takes to get there makes the Hyperreal Vader a toy you ultimately don’t really want to actually play with. Getting it in and out of a pose is exhaustively annoying—it might as well be a statue after you’ve tweaked it for the first time.

In fact, it’s so rigid and stiff that, while attempting to take off Vader’s right hand to replace it with one of the myriad alternates the figure comes with—to posse him holding his saber, using the force, or menacingly gripping and pointing—I heard an almighty pop and snap after the hand refused to come loose of the metal ball joint that sits atop the wrist. A joint in the bicep had either snapped or come loose, I can’t tell—because everything’s internal and I’ve got no way of checking if the ridiculous amount of force I’d had to apply to this very expensive action figure without slicing open Vader’s body suit and doing a small scale version of surgery. 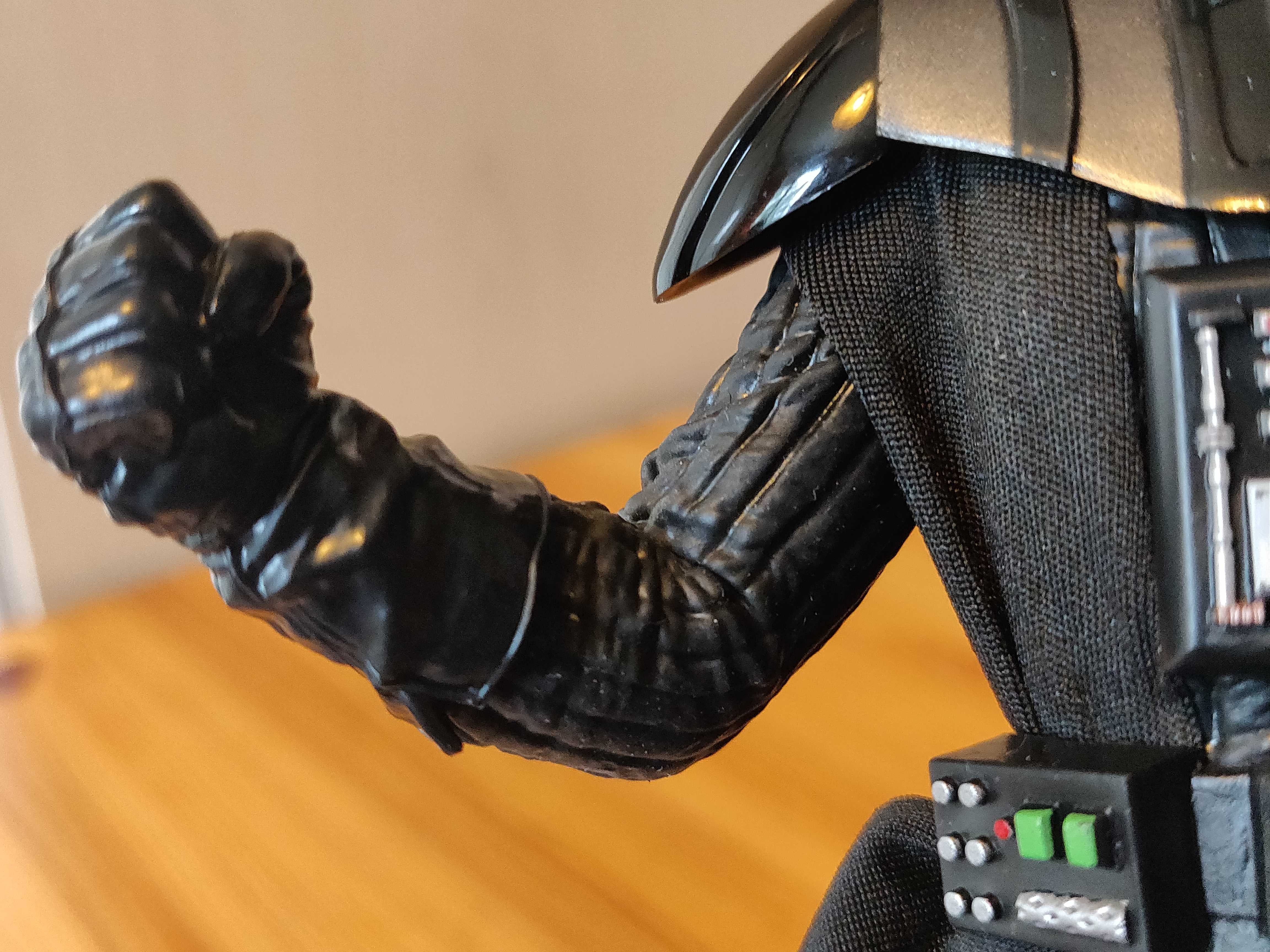 What the joint should look like... (Photo: James Whitbrook/io9) 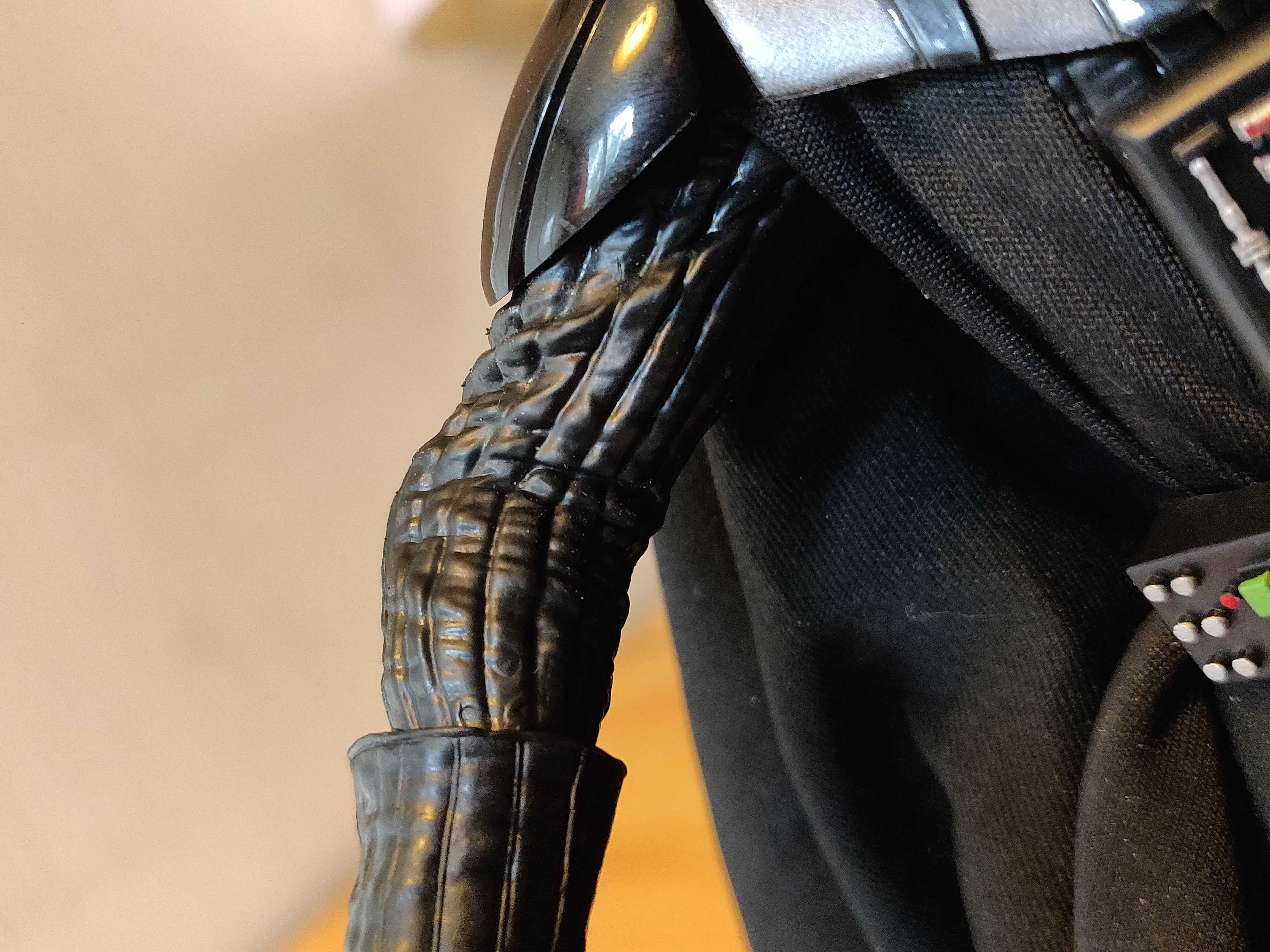 ...and then what it suddenly looked like after the... let’s say violent dislocation. (Photo: James Whitbrook/io9)

Luckily, the fact that the articulation is interior to Vader’s suit means I can still cheat a bit—his elbow still bends, his arm is just a bit looser, kind of like he actually broke it and needs to delicately support it (that is, if this “more machine than man” villain actually didn’t already have robot arms!). I can still pose it, it’s suddenly a lot more delicate than it was. But the fact that that the Hyperreal Vader is so unwieldy to pose and actually play with in the first place—which is, by its very name, kind of what you want to do with an action figure—to the point that even trying to use it right requires a level of force and finicky meddling that can lead to an accident like that is lamentable. On a figure that costs $80? It’s infuriating.

In the end, even without the articulation issues I faced—which might just be down to user error as much as they could be the figure itself—I ultimately came away from the Hyperreal Vader unsure of who the audience for this figure is. It’s not for kids, because no one’s buying a 10 year old $US80 ($118) action figures (plus, there’s that excellent looking line of figures inspired by Galaxy of Adventures coming out, and $US80 ($118) could get you basically most of the initial wave of products there) that are, ultimately very awkward to play with. 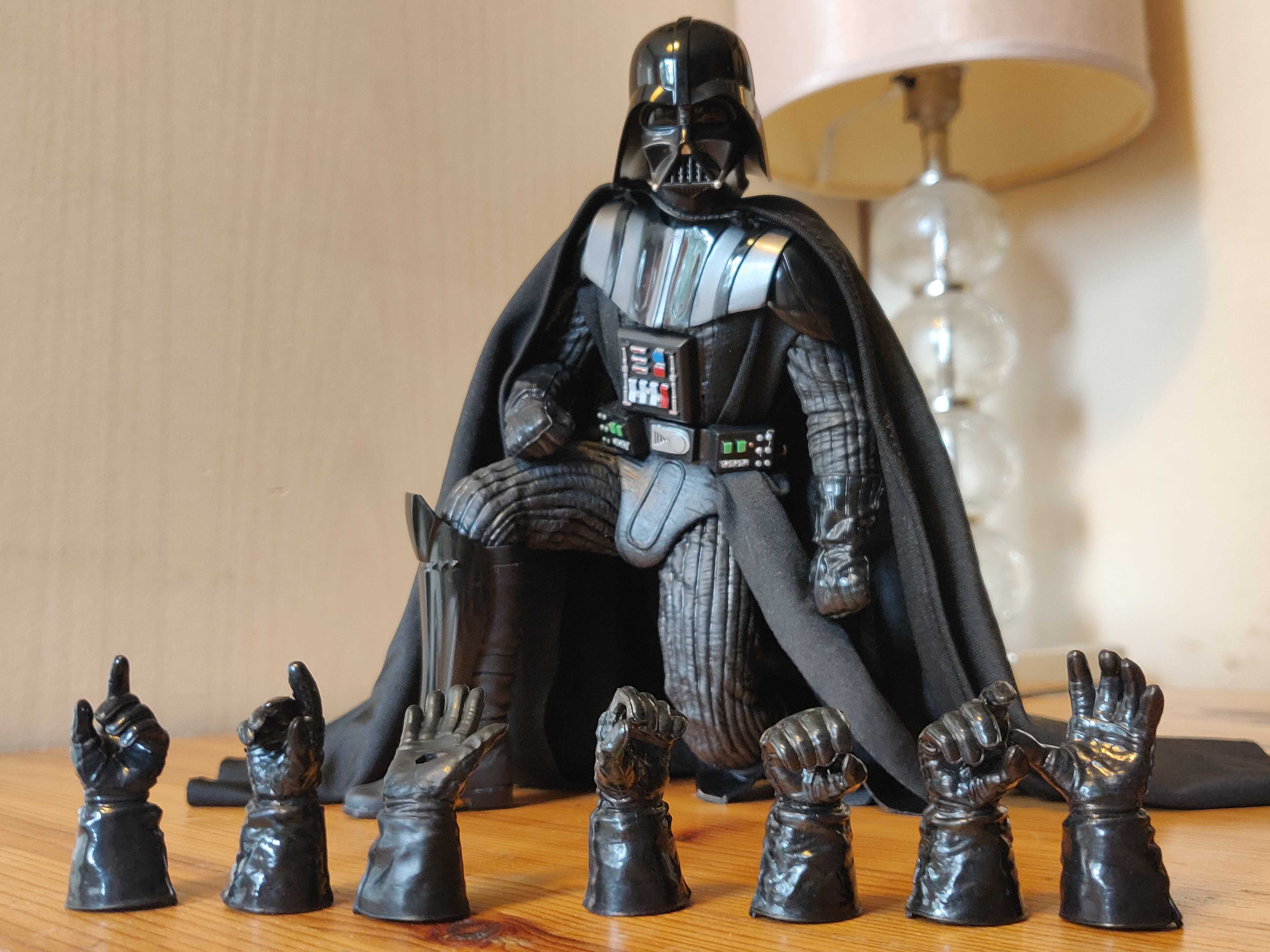 Vader mainly comes with a giant array of swappable hands. Other than that, he has a stand, his lightsaber (with detachable blade), and a Force FX piece to replicate him blocking blaster bolts like he does on Bespin in Empire Strikes Back. (Photo: James Whitbrook/io9) 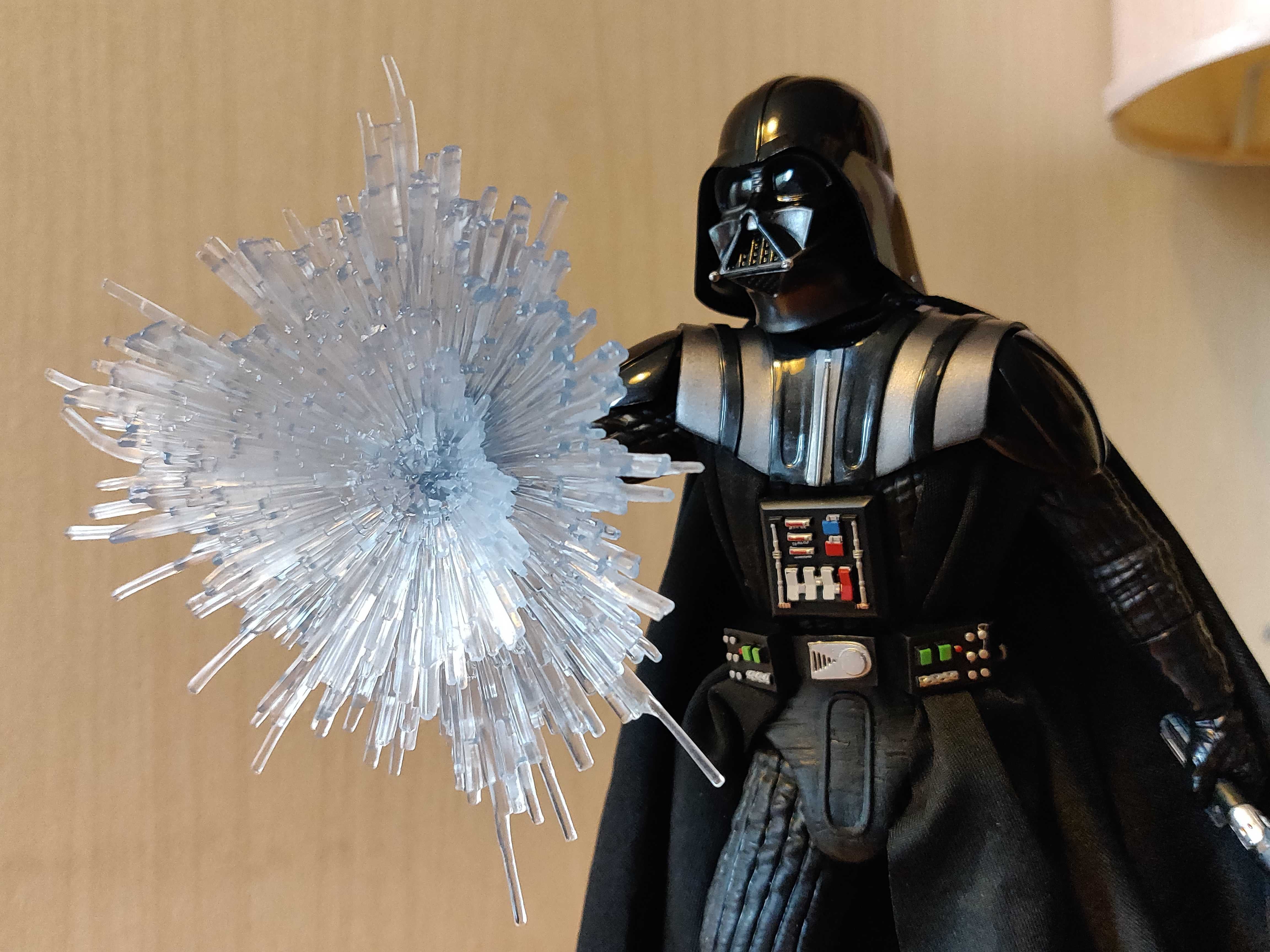 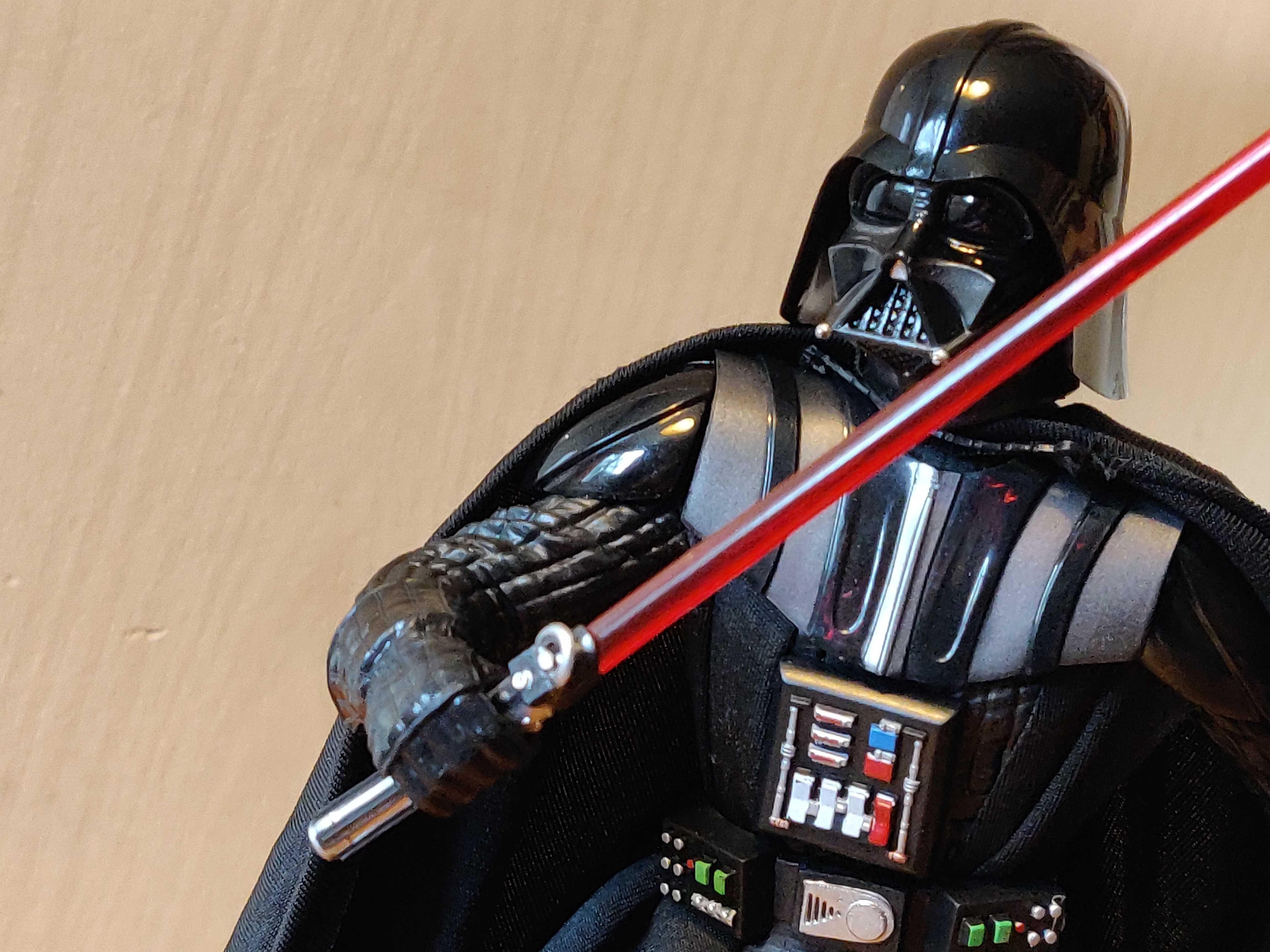 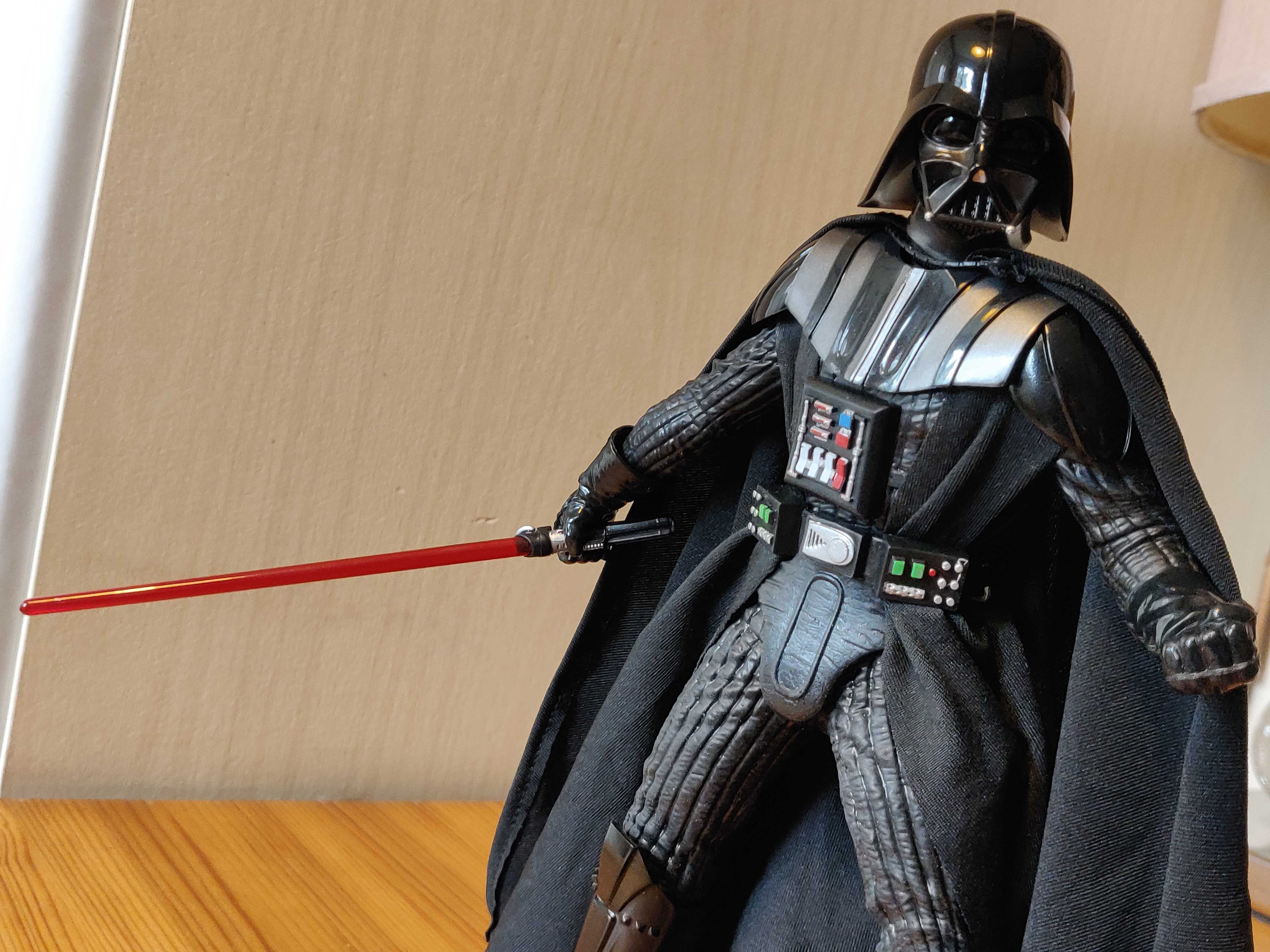 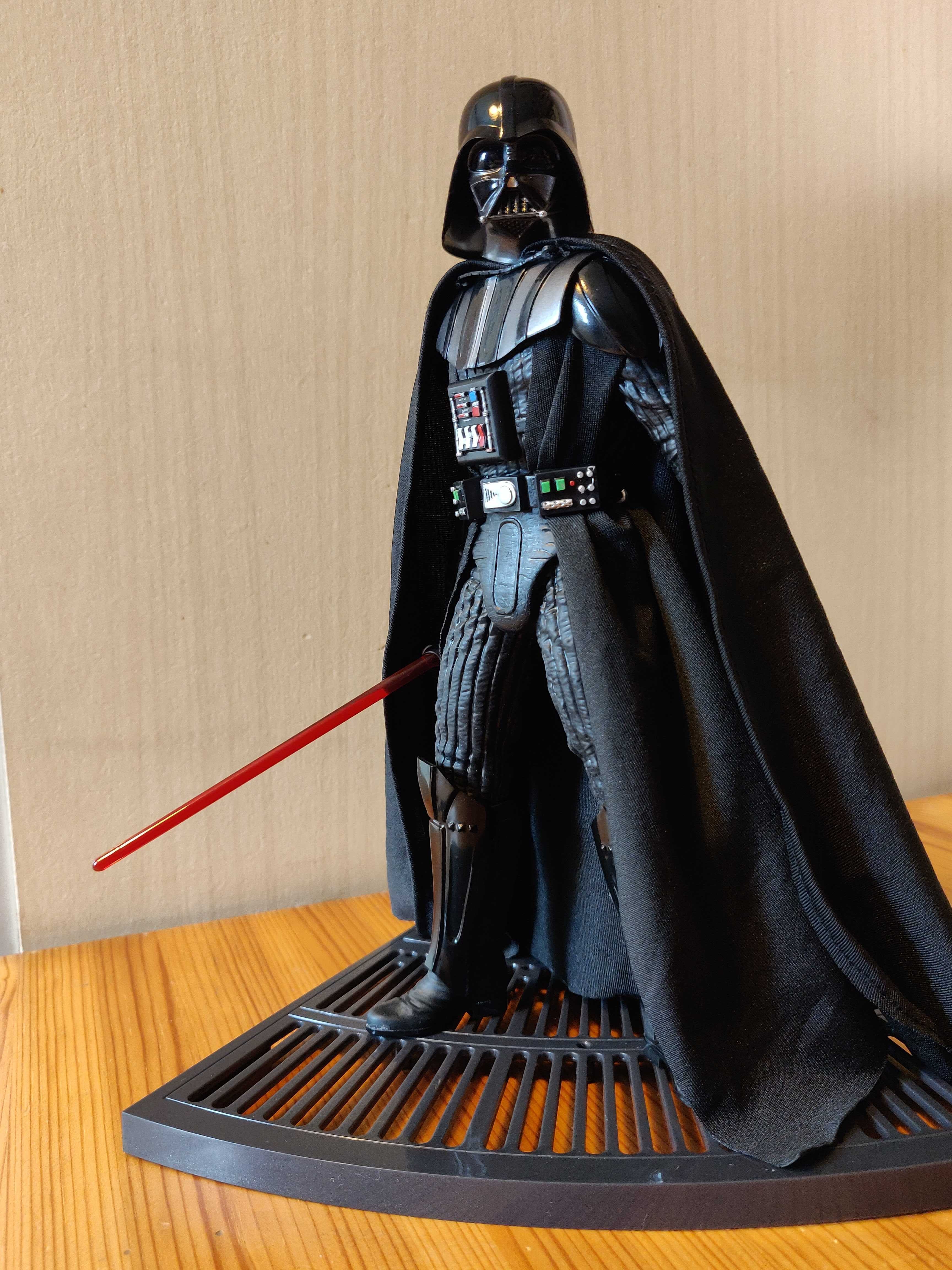 It doesn’t feel like it’s really for collectors, either. At 8″, it’s incompatible with either the vast 3.75″ or 6″ scale collections Star Wars toy fans have been building up for years at this point, so you’re essentially asking them to re-invest into a new scale of characters they likely already own several times over. And if they do? It’s at a price point that is an awkward mix of both being radically more expensive than any other Star Wars figure Hasbro offers while also being much closer to the price territory of more premium Star Wars figures. Eighty bucks is pushing even beyond Japanese import territory like Bandai’s S.H. Figurarts toys, which aren’t just closer scaled to the 6″ Black Series, but make up for that significant extra cost with oodles of accessories, great paint quality, and tons of hyper-specfic articulation that makes them worth their high price.

And hell, if you’re gonna start dropping $US80 ($118) on an action figure on the regular? That’s only three or so figures before you’re looking at the price value of your average Hot Toys figure—which feel both remarkably higher quality in terms of detail and much easier to actually pose and play with than the Hyperreal Vader does.

It’s still early days, however. Vader is just the start—the real test of this new line will come next year, when he’s joined by an Empire Strikes Back Bespin Luke, Habsro’s first test of its pretty remarkable “photoreal” face-painting tech that has elevated the Black Series line from a level that was decent for 20 bucks to something almost magical for its scale. Maybe in the process some of the awkward quibbles that come with the nature of the kinds of materials Vader’s outfit is made from will be less of a problem there. Maybe the interior armature will have been improved.

We’ll have to wait and see. But for now, we have this Vader: a testament that Hasbro can do something new and beautiful, but ultimately misses its mark. 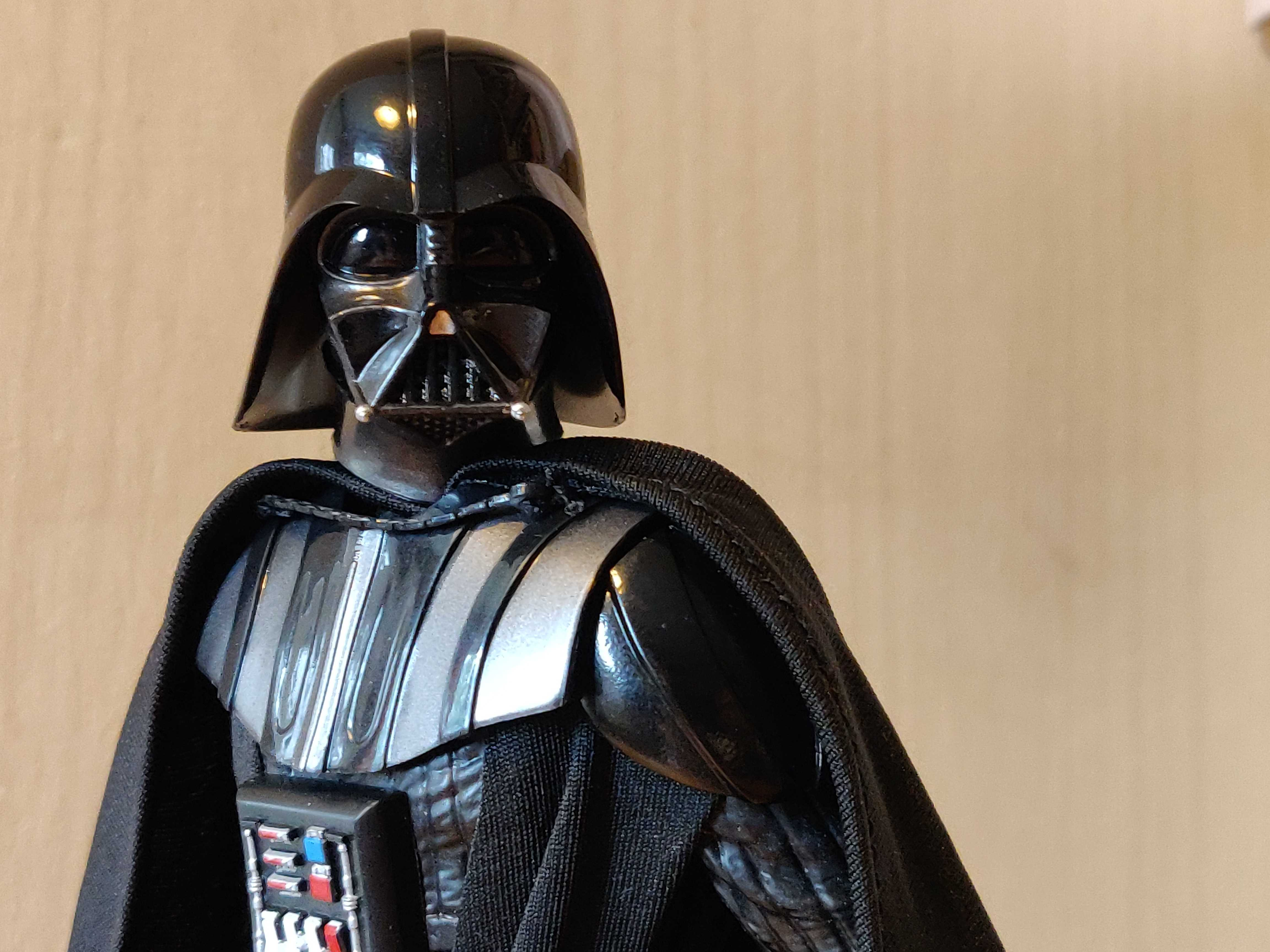