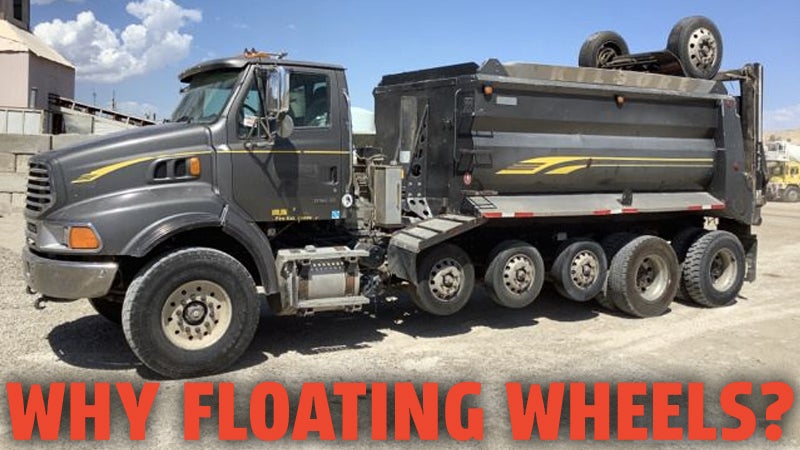 Ever notice that some big trucks sometimes have random-looking extra tires attached to them that seem to be pointlessly floating? Those aren’t spares and they’re not for decoration, even when they’re mounted on the top of the truck.

Hence why some heavy load-hauling trucks have what are known as “drop axles,” which are exactly what they sound like. Drop axles spend most of their time tucked up against the truck’s belly until extra weight capacity is required, then can be lowered when needed.

Let’s take a closer look at the 2007 Sterling LT9500 I showed in the image above here. Since it’s being auctioned off on a government surplus site as I’m writing this, there are good images of its oily bits: 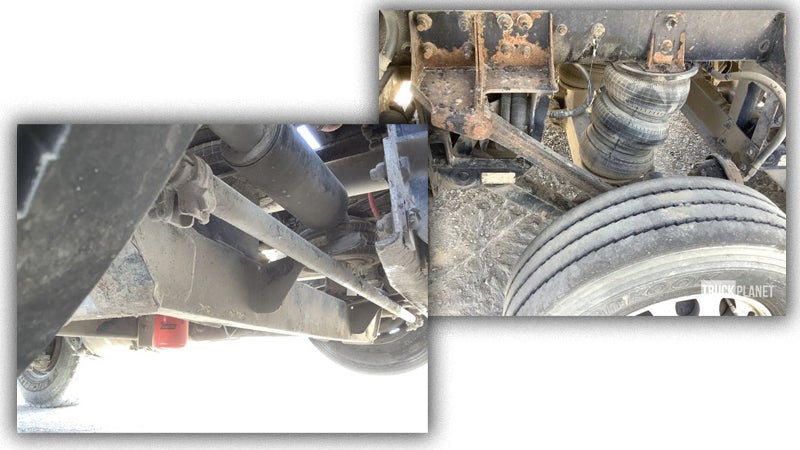 Two angles of one of this Sterling’s drop axles (Photo: Iron Planet)

As you can see, the drop axle on this vehicle gets pushed down by a big air bag, which is that dusty black bloated caterpillar-looking thing in the top right picture for those of you reading this who are less technologically keen. (Hi, mum.)

Here’s a video with neat diagrams explaining similar systems on another truck:

And here’s yet another close-up look at A different kind of truck with drop axles if you want to see it one more way.

How much physical work these drop axles actually do depends on the truck. That Sterling has big, beefy tires and thick axles at the back, but the drop axles don’t look nearly as robust and obviously the tires are tiny by comparison. Other trucks could have heavier-duty drop axles though, which would equip them for harder work.

Drop axles are also significant from a legal standpoint. Legal weight limits for commercial vehicles, which vary by country, are posted per axle. So not only do the extra wheels help bear physical weight, they’re required for compliance with trucking laws.

If you want to get nerdy with this, there are online calculators you can play with to plug in the weight of a truck and the number of axles it has to determine what’s legal and what isn’t. (To be clear, if your job or safety depends on knowing this stuff, please study a more comprehensive rundown.)

That brings us to that weird extra-extra axle you see mounted on top of this ’07 Sterling, and perhaps you’ve seen similar in real life. What is that last axle doing all the way up there? 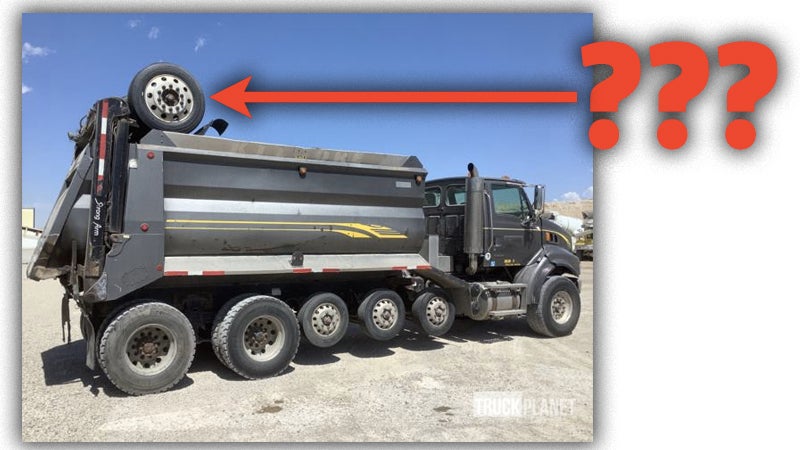 It, too, is ostensibly for weight-bearing but largely for legality. The formula that determines legal weight limits per-axle doesn’t just depend on the quantity of axles, their spacing is important too.

So when this Sterling LT9500 hits a cargo weight that’s really high, that final axle that appears to be riding on top of the dump bucket actually drops all the way down to Earth like a scorpion’s tail and effectively makes the truck significantly longer, satisfying a bigger range of weight-to-vehicle length ratios for legal compliance.

Here’s a closer look at the Sterling’s drop axle that comes from the top: 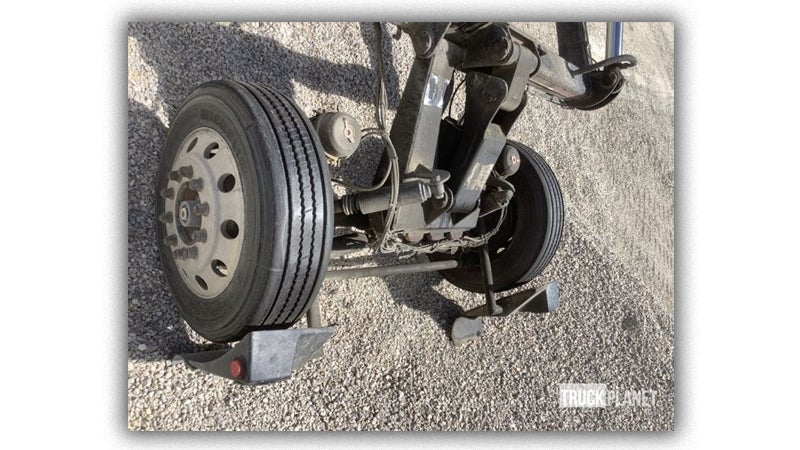 And here’s a video of what that system looks like in action on another truck:

So to review – let’s say your hypothetical dump truck has five full-time axles and five drop axles all rated to 2250 kilograms apiece. In this scenario optimised for easy maths, your dumper bucket can hold 2.8 cubic metres of whatever in its bucket. One day you’re hauling aluminium, that’s 77kg per cubic foot, so filled to the brim the rig needs to bear 7,600kg. That’s no problem with the wheels on the ground.

The next day you’re fully loaded with iron, now that’s almost 230kg per cubic foot and suddenly the truck’s heaving 22,200kg of payload even though the cargo level in the bucket looks the same.

Let’s say your frame can handle it, but the axles are maxed out at 11,300kg. So it’s time to hit the switch on those drop axles. Now you can bear 22,600kg, and the iron can be taken to wherever it needs to go.

Once you dump it, you can retract your drop axles to save on tire wear, fuel and toll bills. And most importantly, the truck will be much easier to drive with fewer wheels on the road.

Hope you had fun trucking with us, or at least learned something today.