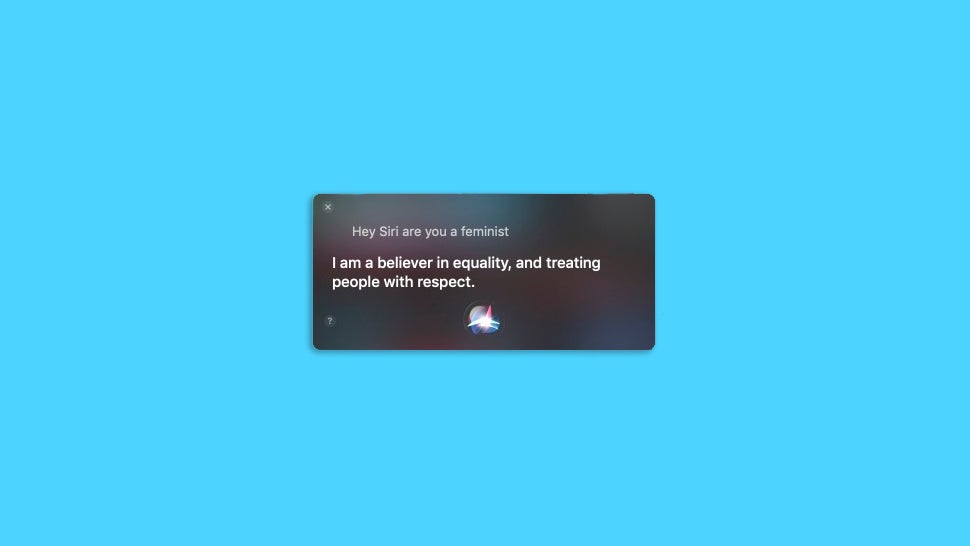 The Guardian is reporting that internal documentation governing Apple’s voice assistant, Siri, was rewritten to specifically avoid the word feminism. The company told the Guardian “[o]ur approach is to be factual with inclusive responses rather than offer opinions.”


The opinion here being… feminism is ok.

Presumably, the employees of Apple have no beef with feminism. While the Cupertino giant, like most tech companies, has a leadership team that is largely white and male it is likely ok with women being treated equally to men, and hopefully, internal policies reflect that. Hopefully Apple doesn’t pay men more money for doing the same work as women and hopefully it has a generous family leave policy that doesn’t put the onus of childcare on people who identify as women.

But according to documents leaked to the Guardian, when it comes to Siri, Apple is extremely averse to using the word feminism—treating it as taboo a word as fuck.

It was previously reported by the Guardian that a small sample of customer interactions with Siri was sent to contractors for review to further improve Siri. Today’s report notes that contractors were reviewing 7 million different audio files gathered from iPads, with plans to review approximately the same amount of clips for five other sources including “cars, bluetooth headsets, and AppleTV remotes.” That would be over 42 million Siri clips reviewed if the program had not been shut down last month.

When the program was active these “graders” would listen to clips sent from devices when Siri was activated and work to better improve Siri’s response to questions. To help with the task the graders were given guidelines by Apple, which were last updated in June of 2018. The guidelines gave graders three tasks: “don’t engage,” “deflect,” and “inform.”

According to the Guardian, these guidelines also directed graders to specifically avoid the word “feminism”. In reference to the word feminism, the guidelines reportedly said: “Siri should be guarded when dealing with potentially controversial content.”

So if you ask Siri if she is a feminist the voice assistant responds with “I am a believer in equality, and treating people with respect.” Which is the line you usually get from people ill-informed on feminism, like that one roommate I had in college who instead identified as a “humanist”, or the line you get from people who purposely avoid the use of the word because they feel it’s reserved for “misandrists” and “woman supremacist” and “feminazis.”

To identify as a feminist is, of course, to merely acknowledge that all people are equal but that society is currently inequal. It’s a fairly small ask and the word has been deeply politicized. It is frustrating to see Apple perpetuate the politicization of the word and use a tool, designed to sound like a helpful woman, to do so. Yet Apple is a company that will shy away from controversy because, you know, it’s a publically traded company and companies have to make money and making money can often mean pissing off as few people as possible.

Apple did not immediately respond to Gizmodo’s request for comment but we’ll update this post when it does.

Just this week The Hollywood Reporter claimed Apple cancelled a show for its new TV+ service because it was too dark and not focused enough on the friendship between two Vietnam vets who embark on a murder spree. There have also been reports that other shows were cancelled for being too violent, or tinkered with to avoid too darkly comedic a tone.

The company also contracts the construction of devices to Foxconn—where employees are regularly abused—and relies on rare minerals that come at the cost of human lives in Asia and Africa. Heck, Tim Cook even meets with Trump to discuss trade and business—despite Trump’s trade war with China, terrible statements after Charlottesville, attacks on Muslim immigrants, and inability to remember Cook’s actual name.

Apple telling Siri it can’t say the word feminist, except when defining it, isn’t surprising, its just kind of disappointing.

Do you have more details on Apple’s program for training Siri or its policies about feminism and women? You can drop us a line at [email protected], DM for Signal, or contact us via SecureDrop or ProtonMail.