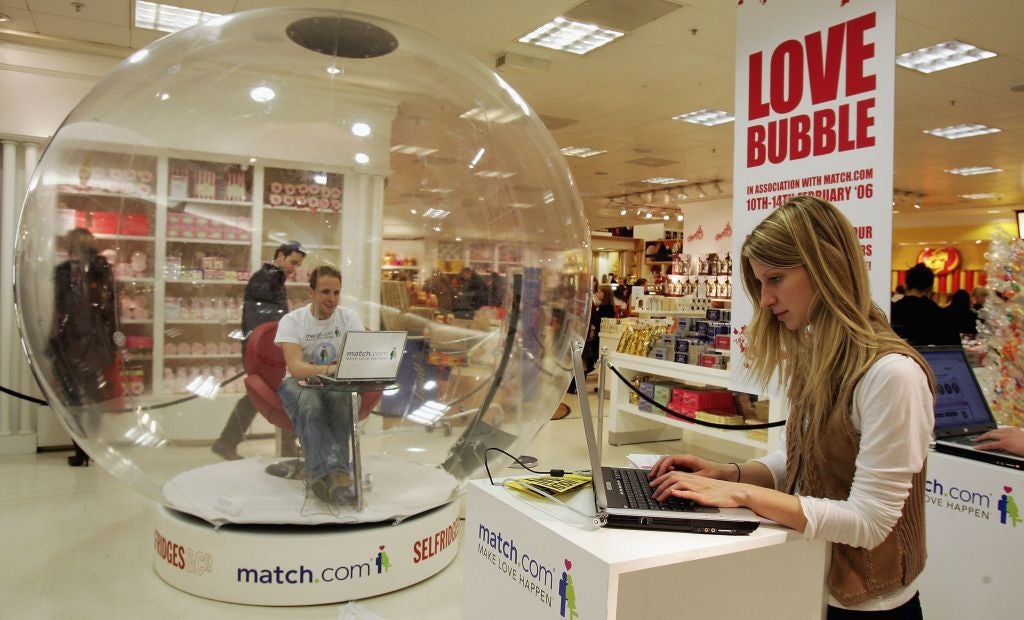 Here’s a guy in a plastic bubble for a Match promotional event in 2006, which really was a very different time. (Photo: Scott Barbour, Getty)

It’s no easy task finding love online. It’s harder still when some of the many dating service options are littered not with hot singles in your area, but with scammers, as has evidently been the case with Match.com, according to a newly filed lawsuit by the U.S. Federal Trade Commission.

Match (the company) owns Match.com, as well as the more memorable OKCupid and Tinder. If you, like me, are not intimately familiar with the firm’s flagship platform, apparently messages from other users would generate email notifications like the one below. But to actually read the contents, you’d have to pay a subscription fee.

Many such messages were sent by fake accounts, according to the FTC filing, which in itself is not all that surprising. The internet is a playground for grifters and botnets. Why should Match.com be any different?

Well, for one, there’s the sheer number of fake accounts apparently floating around on the 24-year-old dating site. “[A]s many as 25 to 30 per cent of Match.com members who register each day are using Match.com to attempt to perpetrate scams,” according to the FTC. More than one in four! That’s an enormous amount of bullshit to sift through, especially on a site that costs over $30 per month.

Just having a shitty website isn’t a crime, per se. But here’s the thing: The FTC claims that Match knew many of these messages were being sent by illegitimate accounts and actively filtered out the spam for users who were already paying for the service!

The FTC alleges that millions of contacts that generated Match’s “You caught his eye” notices came from accounts the company had already flagged as likely to be fraudulent. By contrast, Match prevented existing subscribers from receiving email communications from a suspected fraudulent account, according to the lawsuit.

Rather than ban catfishers and other known grifters, the company appears to have turned them to its advantage to tempt us lovelorn shmucks into paying for a Match subscription — and then make that subscription exceptionally difficult to cancel.

The FTC released massive spreadsheets of online dating consumer complaints, broken out by platform, in 2018, and unsurprisingly Match outpaced other services. A considerable portion of them, like this one submitted by a Houston-based customer, refer to these deceptive billing practices in more and more colourful detail:

I ordered the service then cancelled it because I didn’t find anyone interesting there. They charged me for another 3 months after my cancelling. Then I called in to dispute the charge. The first rep was very rude, called me a liar, told me he’s not refunding me and that he’s blocking all access to Match.com.

Dispute went in and Match.com still refused to refund me and continues to block my access to the site. Then they charged me again! And when I speak to Match.com, they’re telling me they’re still ‘investigating.’ I told the 2nd rep, Velma, they can’t have it both ways. They can’t charge me then not let me use the product.

They need to refund me because I cancelled a long time ago, I don’t care what they say. OR, they’re not going to refund me and let me use up the 3 months then cancel it again. They can’t just have their cake and eat it too — take my money and not give me a service. That is outright FRAUD! —-

Additional Comments: I want my money back and I want them to stop charging me and give me back my money.many of which pertain to folks successfully scammed by the sorts of accounts the service leveraged to push its subscriptions. What arseholes.

“For nearly 25 years Match has been focused on helping people find love, and fighting the criminals that try to take advantage of users. We’ve developed industry leading tools and AI that block 96 per cent of bots and fake accounts from our site within a day and are relentless in our pursuit to rid our site of these malicious accounts,” Match wrote in a statement.

“The FTC has misrepresented internal emails and relied on cherry-picked data to make outrageous claims and we intend to vigorously defend ourselves against these claims in court.”

Among other forms of redress, the FTC is hoping to get Match to cough up any ill-gotten monies and repay consumers injured by these practices.