The Google Nest Hub Max Is Your Smart Assistant Granddaddy

If you have a smart assistant in your home, you’ll know it’s a handy tool. Rather than finding your phone, unlocking the screen and opening up an app or two to find the information you need, a smart home device can answer most queries in the space of a few seconds.

Google’s Next Big Thing, the Nest Hub Max, is the granddaddy of smart assistants. Aside from streamlining information, it doubles as a security camera, a digital photo album, a crisp music system, an expert recipe book and a whole lot more.

The main things left to consider are the $349 price tag and whether recent privacy concerns — it was revealed humans were listening to your Google requests — are worth the convenience this device delivers. 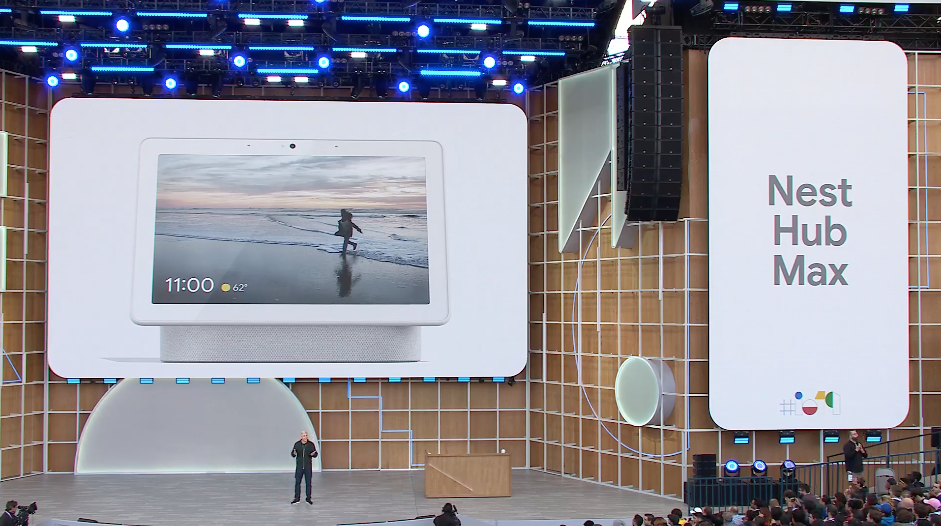 With Nest Hub Max, Google Added A Camera And Ruined The Best Thing About The Home Hub

Over the past two years, Google’s made a lot of strides when it comes to smart home tech—to the point where the Google Home Hub is our smart display of choice. At this year’s I/O developer conference, it seems like Google’s doubling down with the Nest Hub Max.

Like the smaller incarnations before it, the Google Nest Hub Max is a smart assistant that can tell you the weather, play music, read you back the news and let you know how bad the traffic is. The main difference from the Google Nest Hub (formerly Google Home Hub) is the Max has a huge 10-inch touch screen, a camera and some woofers to make the experience a whole lot neater.

While it looks deceivingly like a tablet, there’s no real home screen like you might expect on one. The time display or photo album is the equivalent of its homepage and you can make your way through the features using your voice or some confusing gesture navigation.

Here’s a specs dump for those who want all the juicy tech details:

While it wasn’t the feature I was most excited about initially, the rolling photo album turned out to be my favourite. We take so many photos in everyday life, but for most people they sit in your drive until you decide to upload them somewhere. When I saw the device had the rolling photo album just like the Google Nest Hub, I got my shit together, gathered my favourite travel shots with friends and family and popped them in a Google Photos folder.

It’s a nice little slideshow I’m greeted with every time I walk into the kitchen. Finally, the hundreds of photos I take on vacations can be put to use somewhere other than Instagram.

The display is crisp

The 10-inch tablet looks great whether it’s playing HD videos from YouTube or just showing your photos. The colours look great, the screen was responsive and, with the brightness all the way up, it’s refreshing for the eyes. It has a sensor to detect the light, which tends to work reasonably well. It dimmed when it was nighttime and adjusted for the morning shadows when the sun was shining through my kitchen’s windows.

It’s also got a fat bezel but considering this is a kitchen device, the chunky bezel feels appropriate, giving you a sense of sturdiness.

Yes, I know my microwave clock is out of sync. Image: Gizmodo Australia/Sarah Basford

My ears are grateful for clear music playback

I own a Google Home Mini already and my favourite task for it, aside from telling me the day’s weather, is making it play music. While I have a sound bar already in my home that’s made for crisp playback, I enjoyed not having to fiddle through my phone and switching on Bluetooth (peak lazy). The Nest Hub Max now makes music listening both a convenient and excellent-sounding activity.

It comes with two stereo speakers and a woofer, which really makes a difference. Suddenly, I could hear bass lines I couldn’t previously hear and that general tinniness that peeped through before on dense music tracks was clearly gone.

The one thing I really hate about playback on the Google Home Mini is when the speakers are pumped up, it is nearly impossible to yell over it in order to get it to stop. Although the voice recognition is still not perfect, thankfully the Nest Hub Max helps solve the issue by introducing air gestures.

The addition of a camera gives the Nest Hub Max one of its most useful features: the Quick Gesture. Now, if your camera is switched on, you can raise your hand up like a wave or a salute and the device will pause whatever it’s playing. Doing it again will un-pause.

It seems like a small, simple feature but it’s a big addition for me because now I don’t have to yell louder than the speakers in the hope Google Assistant will hear me and listen to my demands. My apartment building is probably very pleased Google added this important feature.

I’m not about to pretend I have my apartment decked out with expensive smart home devices and features, but a few are littered around my cheap Kmart and IKEA-decorated home. For example, in a moment of weakness, during a certain Amazon sale that fell right on pay day, I splurged on a Philips Hue Light beginner’s pack.

Once I linked the lights to my Google Home app, I was able to control the basic features of the lights by turning the brightness up or down and selecting from a variety of preset colours. It’s functionality on the Nest Hub Max is limited when compared with the Hue app, but it means I can now control the lights with my voice and I feel like a god.

Mixing languages has never been AI’s strong suit and it seems Google is still lacking a little in this department. While it’s gradually adding more improved language support to the device and you can change the device’s language depending on your region, it struggled.

While cooking in the kitchen, I tried to get the Nest Hub Max to play me some music. I wanted to chuck on some songs by a Spanish artist, Rosalía, so I asked it to put on one of her current singles. Naturally, the song is in Spanish and I speak the language so I pronounced it how it would usually be said. It heard something like ‘Russell Lea’ and proceeded to play something by the Russell Lee Band.

I attempted to anglicise the pronunciation, hoping it might pick it up better. It then played something called “Little Poor Me” by Layto when I asked it to play “Yo x Ti, Tu x Mi” by Rosalía and Ozuna. After a few more attempts, it started playing the artist station, not the specific song, but I’d given in to its whims. Close enough, I thought.

Despite it being marketed as a handy kitchen assistant (and it does deliver on that promise), the Nest Hub Max isn’t actually water proof or grease proof. This seems like a pretty glaring oversight as kitchen benchtops are prone to spills, grease and oil buildup and just general mess (surely, it isn’t just me).

With my limited bench space, I had to find a place suitable as well as one that was far enough from the action zones of my kitchen, which is a pretty wide-reaching area as I’m a messy cook. The Nest Hub Max will resist smudges, which is great if you really need to touch it while you’re preparing food, but come on, water and oil resistance is essential.

Google promises video captured by the Nest Hub Max is encrypted within the device and not send to a cloud somewhere in the world. It also offers an electrical ‘kill switch’ that’ll instantly disable the camera and the microphone.

But despite all that, I’m still left feeling a little uncomfortable about it. While it might not be rational to assume someone’s watching me, I’ve read many horror stories and I’ve seen that damn Black Mirror episode.

To get an idea of what it can see, you can connect it to your app and opt in for a live view of what your Nest Hub Max can see at the moment.

Disabling the camera and mic, upsettingly, also disables the incredibly helpful air gesture navigation. It’s an okay fix if you’re not using it but you might want to switch it back on when cooking or preparing messy food.

Again, the size is lovely but the reality is, most people don’t have a big, completely de-cluttered space to pop it in. I have to do some extensive clearing to find a spot it could fit in, away from the main kitchen traffic (see lacking waterproof rating above) and even then, it’s taking up a fair bit of space.

It’s not the actual size of it but the fact you need to clear the space in front of it so the camera isn’t obstructed, you can see the images and to ensure those woofers aren’t backed straight into the wall. Let’s just say, my setup looks nothing like the clean aesthetics of the promo shots.

Also, it’s not portable — as in it needs a power outlet to work — as I soon found out when carrying it to my balcony for a photoshoot. That means you’re limited in where you place it as it needs to be near a power source.

If the $349 price tag isn’t an issue for you, the Google Nest Hub Max is probably Google’s most useful home smart assistant. While the bare bones Mini has serviced me well over the past two years, its utility is incomparable to its granddaddy.

The issues I had with my original Home Mini, like yelling at it when the volume was too loud or the cumbersome recipe readings, are resolved with the Nest Hub Max and while Google Assistant still has some issues hearing or understanding my queries, she’s still a few steps ahead of Siri in my opinion.

The dealbreaker for many, however, will be the cost; many people don’t have $349 to fork out no matter how good it is at making inconvenient tasks more streamlined. Following a recipe can be annoying if you’re using your smartphone and having to unlock it with dirty hands so this is a perfect shoe-in if this a regular activity for you. With smartphones often costing more than a thousand dollars these days, $349 for a smart home device that does a fair bit more than read back recipes maybe isn’t that far-fetched after all.

For me, the Google Home Mini was a great gateway drug into Google’s ‘let us make help you be lazier’ ecosystem and the Nest Hub Max is the natural conclusion. Peace out, my smart home is complete. 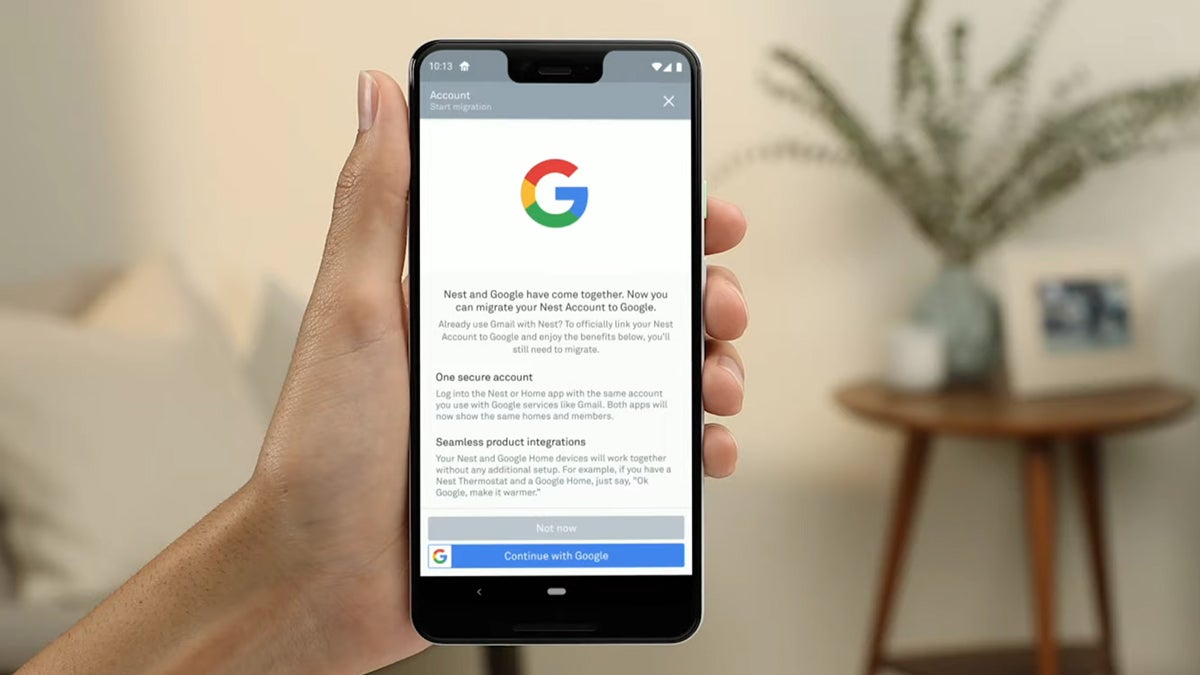 It’s official: If you’ve got a Nest account, you can now swap everything over to your Google account. But should you do it right away, if at all? And why is Google asking you to combine accounts anyway? Here’s everything you need to know if you’ve got Nest-branded smart home gear set up.