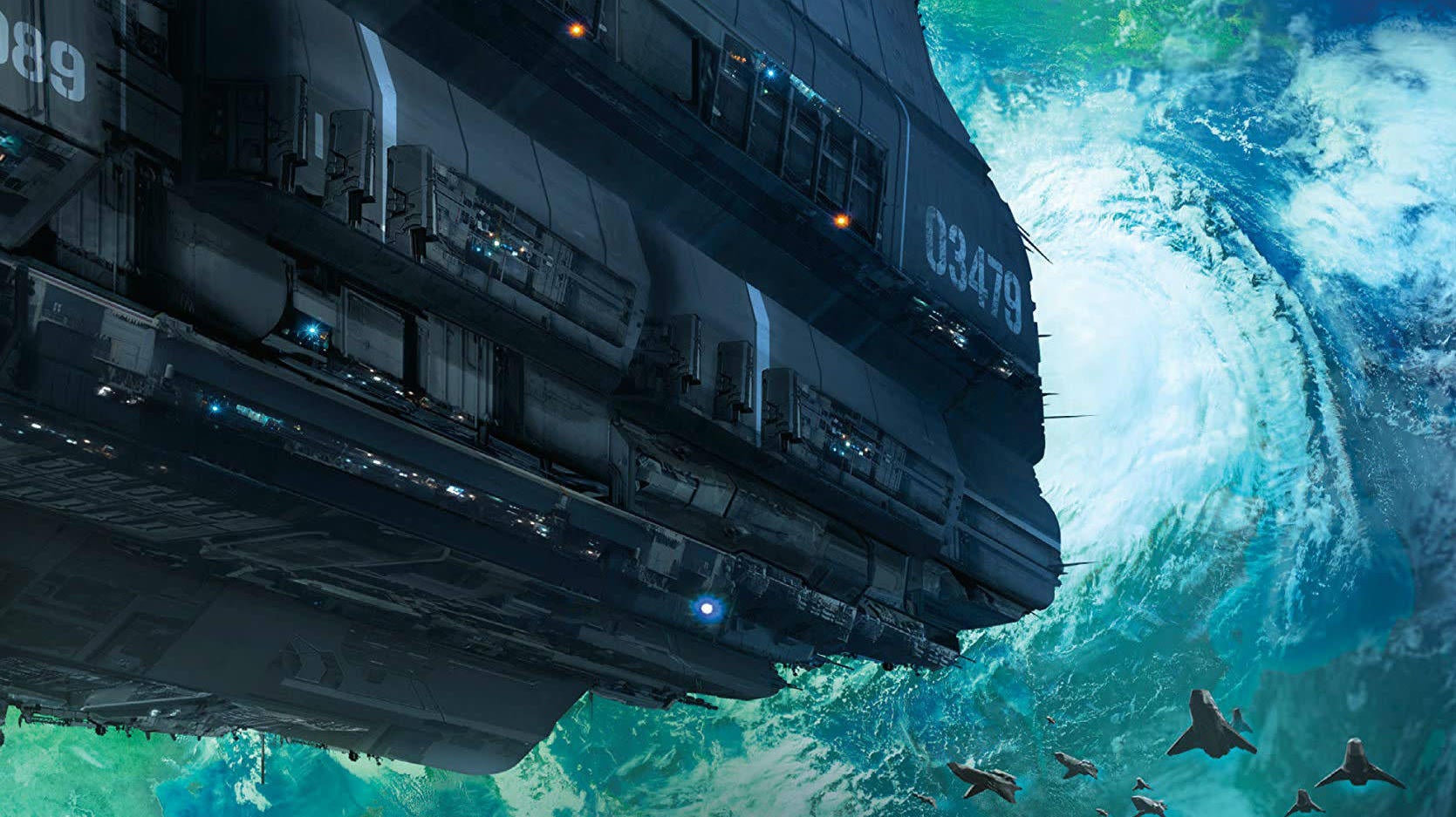 This month’s crop of brand-new sci-fi and fantasy horror books include space battles with hostile aliens, multiple mages, a pet crow who’s got a front-row seat to the zombie apocalypse, ghosts, dragons, salty heroes, and even a few tales of tech gone wild. Dig in!

When the murder of a child rocks a small town, a cop puts aside her scepticism to team up with a local college professor who’s been having strangely accurate visions about the case. (August 1)

Blood of an Exile by Brian Naslund

The new Dragons of Terra series begins with this debut novel about a condemned dragon slayer who’s given an unexpected shot at redemption — and, possibly, a chance to save the entire kingdom while he’s at it. (August 6)

In this military sci-fi adventure, a man dodges his criminal past by joining the military, but nothing he’s faced before will prepare him for the powerful new weapon he and his squad will face on their first mission. (August 6)

This alt-history digs into the Soviet space program, imagining that most of the cosmonauts who seemingly returned home safely actually didn’t make it — but instead had twins waiting back on Earth who’d been roped into deceiving the public. (August 6)

A mage decides he must stand up to a powerful goddess — not realising her strict control of all magic is actually in service of a greater, soon-to-be-revealed purpose. (August 6)

A trash-talking pet crow named S.T. is living the good life in Seattle until his owner and, well, all the humans suddenly start turning into zombies. Can S.T. rally the local animal population to help stop the apocalypse? (August 6)

The Dragon Corsairs fantasy series wraps up with a jailbreak, the crowning of a new king, and a would-be hero making an earth-shattering discovery while he’s in exile. (August 6)

The Age of Dread trilogy concludes as all gods, sorcerers, and mages must put aside their past differences and join forces to defeat a dangerous new deity that’s threatening absolutely everyone. (August 6)

House of Salt and Sorrows by Erin A. Craig

After four of her 12 sisters die under mysterious circumstances on her family’s isolated island, a young girl decides to find out if a rumoured supernatural curse is really to blame — and if there’s any way she can protect everyone else from falling victim to it, including herself. (August 6)

The Darwin Strain: An R.J. MacReady Novel by Bill Schutt and J.R. Finch

After helping defeat the Nazis, crypto-zoologist R.J. MacReady is back for his third adventure, this time investigating a strange volcanic spring that’s purported to work miracles… if you can get past the sea monsters that are said to be guarding it. (August 7)

Five years ago, “the Pulse” happened, and humankind’s been trying to recover from being hacked by an intelligent alien race ever since. This novel (named for the scientist who discovered the hack) is written in the style of an oral history — transcripts, interviews, etc. — of the event and the chaos that followed. (August 13)

The Girls With Kaleidoscope Eyes: Analogue Stories for a Digital Age by Howard V. Hendrix

The Gurka and the Lord of Tuesday by Saad Z. Hossan

An ageing soldier living in exile and a djinn who’s awake after thousands of years of slumber become an unlikely duo in a battle against Karma herself. (August 13)

The Warehouse by Rob Hart

Ron Howard has already optioned this “Big Brother meets big business” tale of a pair of workers (including one who’s secretly undercover) who suspect there’s something very rotten at the core of a massive tech giant operating under the benign name of “Cloud.” (August 13)

The Last Hope by Krista and Becca Ritchie

This sequel to The Raging Ones sees its trio of young heroes — who’ve just escaped from the brig on an enemy spaceship — heading to a dangerous new planet in search of a child with mysterious powers. (August 13)

In the third Saga of Recluce book, chaos magician Beltur and his crew settle in a new village, hoping for a fresh start. But their new home is a lawless place, and it soon falls on the mages to keep everyone in line — not to mention provide protection from an approaching army. (August 13)

Of Ice and Shadows by Audrey Coulthurst

Princesses Denna and Mare think they’ve finally found happiness together, but it soon becomes clear that Denna’s dangerous magic powers require secret training to control, and Mare must step into a political role that makes their situation even more perilous. (August 13)

The Cruel Stars by John Birmingham

With all of humankind threatened by violent “species purists,” a group of five misfit survivors — including a reluctant commander, a disgraced soldier, a princess, an outlaw, and an ageing hero — must pull together and make one last stand. (August 19)

This follow-up to Planetside picks up with military hero/pariah (depends on who you ask) Colonel Carl Butler, whose new corporate gig starts off dull but ramps up quickly when a competitor suffers a devastating hack — and Butler’s tasked with sorting through a mystery that soon turns deadly. (August 19)

The City and the Cygnets by Michael Bishop

This collection of stories traces 70 years in an alt-future Atlanta, where a giant dome encloses the city and humans live and work across class-divided tiers in an artificial, increasingly repressive environment. (August 20)

Inch by Inch by Morgan Llywelyn

The sequel to Step by Step brings its characters closer to the brink of the apocalypse, as the devastating, chaos-sparking “Change” has progressed to the point of making metal dissolve. (August 20)

A new trilogy begins with this debut novel about two young adults who are called to help restore their ancestral home, a faraway continent ruined by a war between gods thousands of years prior. (August 20)

The author of the Natural History of Dragons fantasy series continues in that universe with this tale of Lady Trent’s granddaughter, an archaeologist whose research unwittingly brings an ancient and dangerous conspiracy to light. (August 21)

Song of the Abyss by Makiia Lucier

A teenager longs to be a great explorer like her grandfather, but her dream takes a detour when her ship is attacked. She’s able to escape, but everyone else vanishes without a trace — and the hunt for the truth entangles her in a mystery far more malevolent than she bargained for. (August 27)

Disney Parks’ newest attraction now has a novel exploring the history of Batuu, where General Leia Organa’s spy Vi Moradi has just arrived to do some recon and recruiting for the Resistance, despite the lurking presence of the First Order. (August 27)