This Is How You Do A Boring Car Right 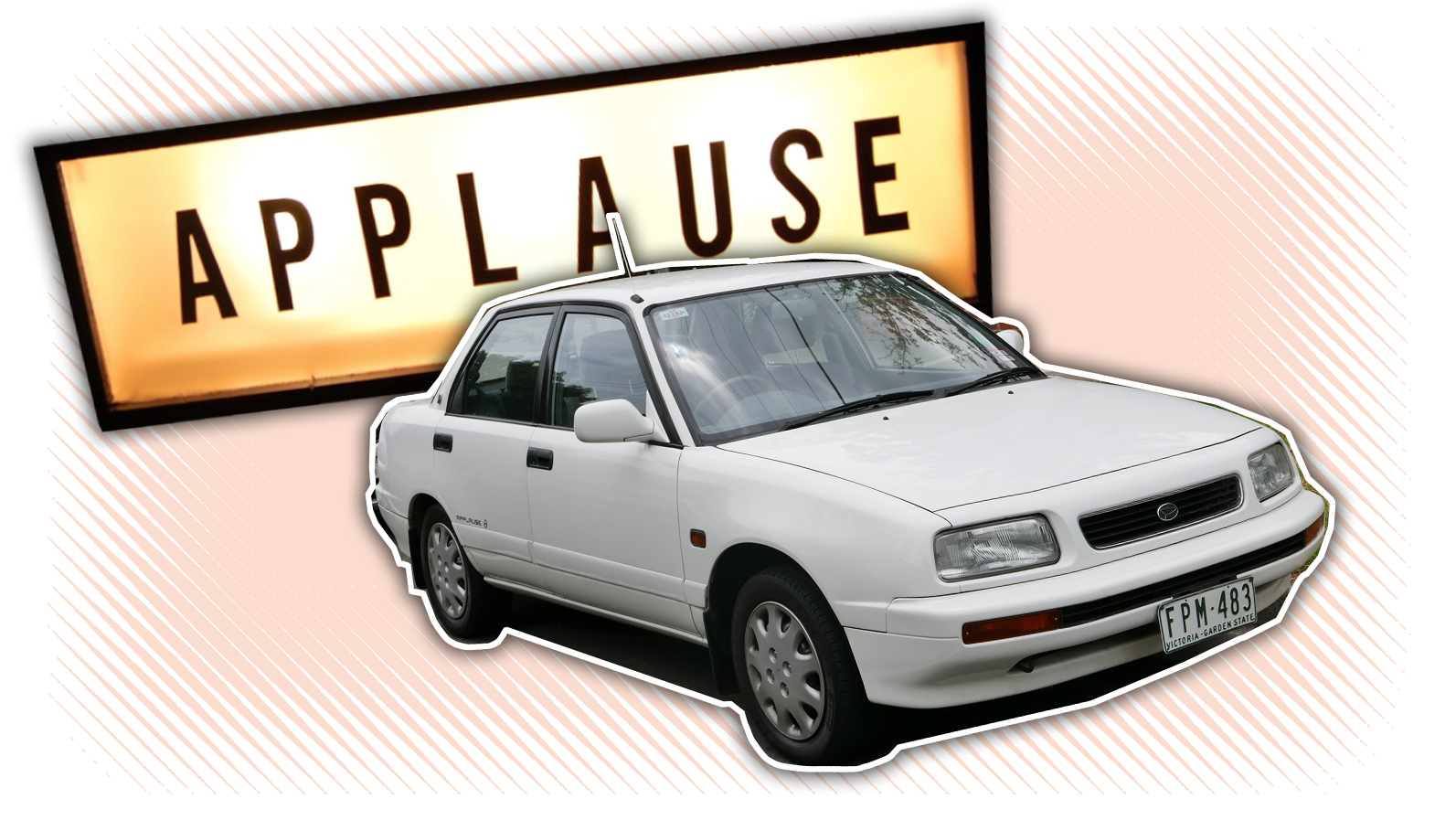 I think my most fervently-held political belief may be my fierce allegiance to the Antiboca movement, the grassroots organisation of people very much against boring cars. That’s why I’m so baffled about my fascination with this car, the Daihatsu Applause. It’s a boring car. I can see that. And yet, somehow, it’s a boring car done right, and I have to respect that.

Keep in mind, this is coming from me, the cranky yutz behind “Meh Car Mondays,” our old weekly excoriation of boring-arse automobiles. And yet here I am now, about to tell you, with earnest admiration, about a car most people believe is remarkably boring.

Things are weird, sometimes. We’ll just leave it at that.

The Daihatsu Applause, built from 1989 to 2000, may be one of the most understated and rational cars I’ve ever encountered. It looks like any number of smallish, four-door front-wheel drive family sedans, like a Civic or Corolla of the era.

The styling, while somewhat bland and anonymous, at the same time manages, I think, to be cleaner and more appealing than most of its rivals. There’s something about its honest, unadorned qualities that just feels, well, right? 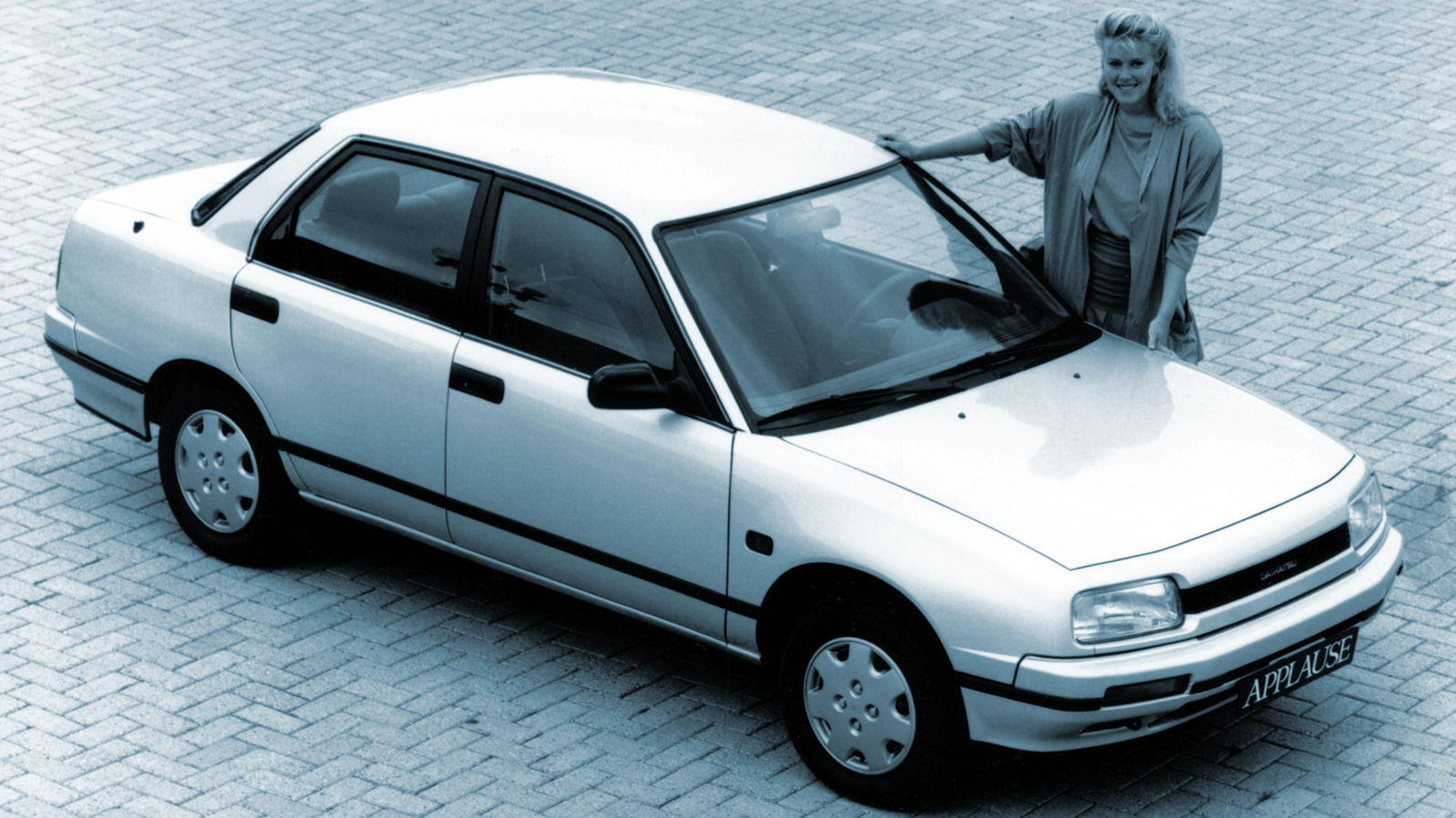 Look at this early version with its rectangular headlights and full width, narrow grille. There’s something about that front end that just works. The way the door handles extend to the cutline is appealing in a sort of oddly technical way, and the whole thing just feels crisp and sensible, in a pleasingly no-bullshit sort of way.

Check it out with that roof rack and soft top! That’s kind of appealing, right? It’s not just me? That’s a Windward concept version that never made it to production, because, I suppose, that’s just too much excitement. 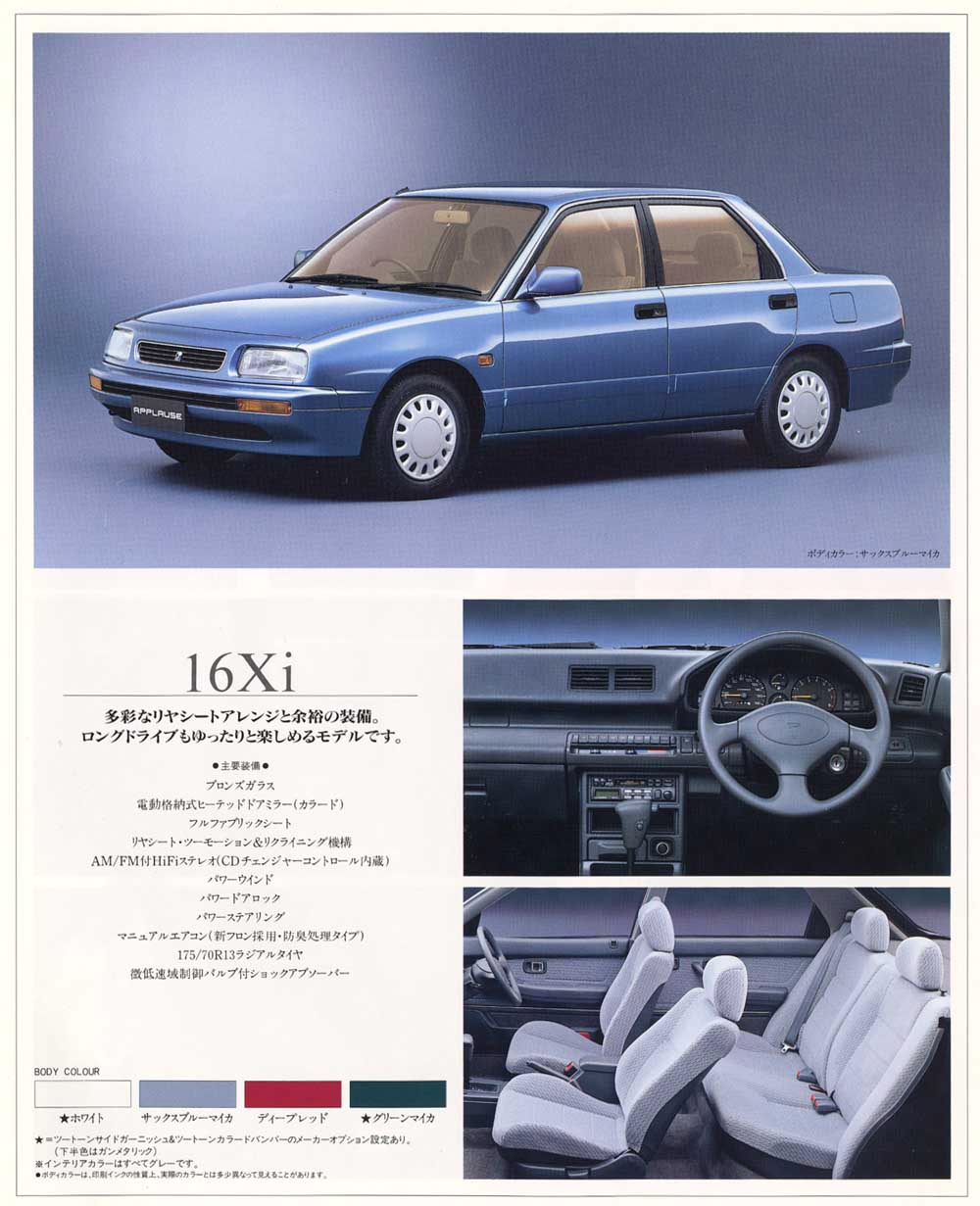 Subsequent facelifts I think got a bit further away from the ideal, though. This grille design I don’t think works quite as well as the original full-width one, but it’s not bad. The final facelift tried to push it upscale, like a baby Lexus: 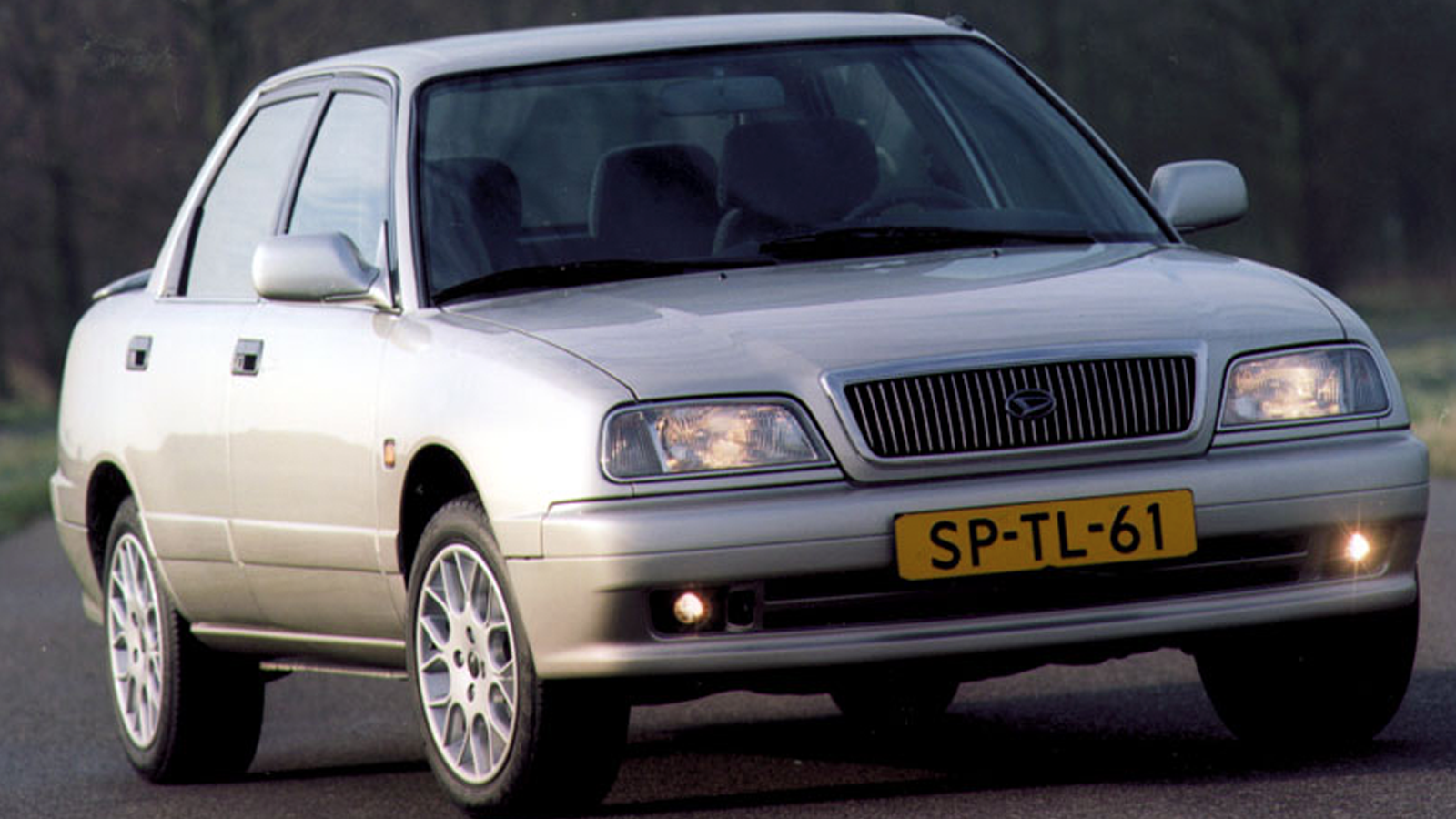 I don’t think that works as well. The fancy grille and lights lose the simple charm of the original.

There’s not a whole lot going on in the design, which, I suppose, is the core of its appeal. There is, however, one very big secret it’s hiding: 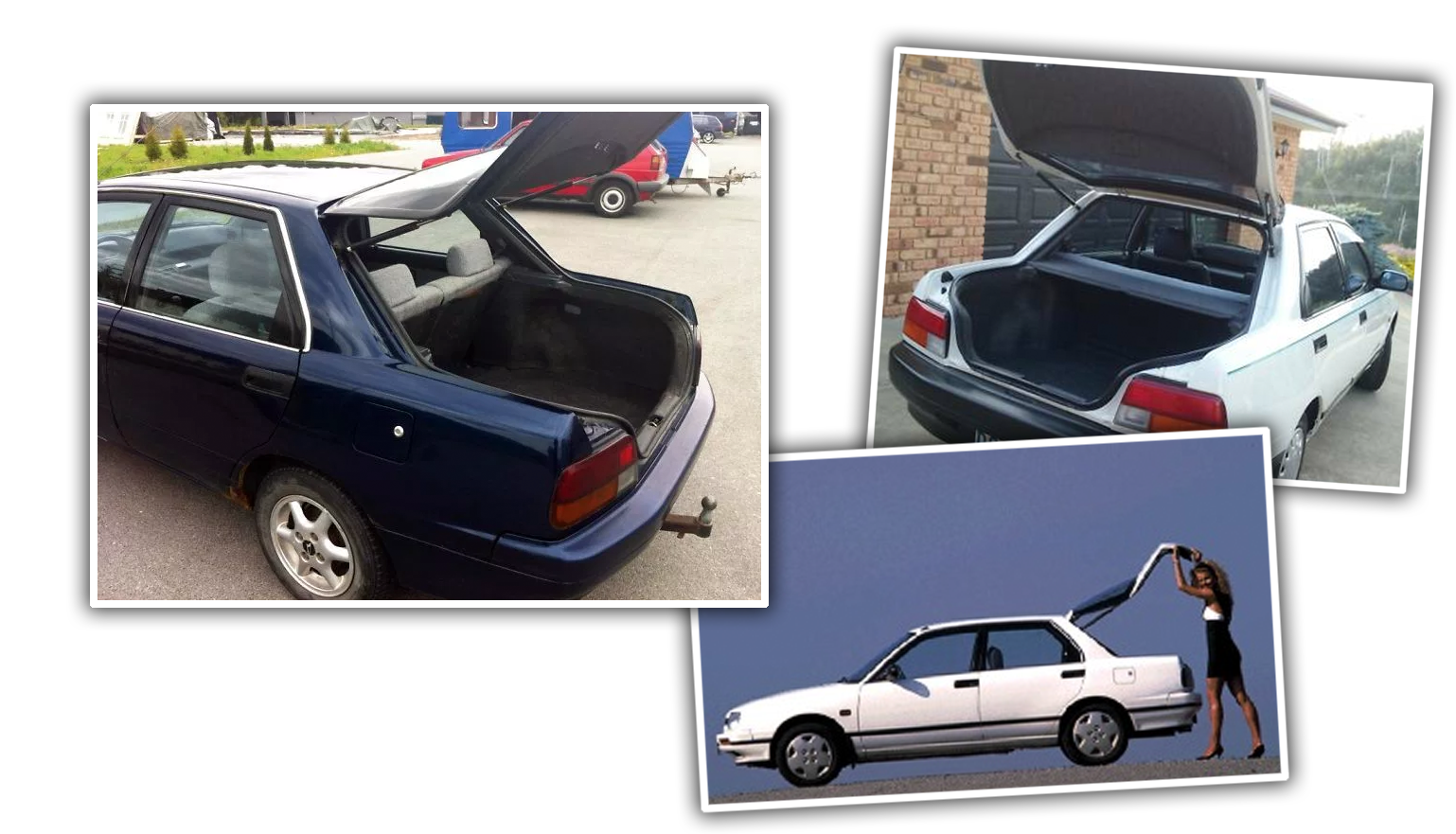 Ah ha! Gotcha! It’s not a boring little sedan, it’s a slightly-less boring hatchback that’s pretending to be a sedan! And being pretty convincing, too. When that trunk/hatch opens up, that’s a genuinely colossal opening you have there, which just reinforces the whole low-key practicality of this thing.

It so doesn’t want to make waves that it hides its hatchback utility behind a mask of small sedan anonymity. It’s a bold move, except for the fact that it’s just about the polar opposite of bold.

This isn’t a car anyone got passionate about. It wasn’t quick (103 HP) its virtues were more frugal (great gas mileage, holds a lot of shit, no one notices it), and it’s likely almost extinct now, because, let’s face it, no one ever really cared about it all that much, but I just have to take a moment and point out that this humble little straight-shooter of a car seems to have done its job as a useful, inexpensive, frugal, everyday car remarkably well.

Sure, it’s boring, but it’s just fine with that. It’s boring in the same way that things that just work are boring. Some things, sometimes, you want to be a little boring and predictable, and I think the Applause manages to do just that.

This is boring done well. Give the Applause a big round of, um, accolades.