Stranger Things 3 Game Is A Boring Rehash Of The Show 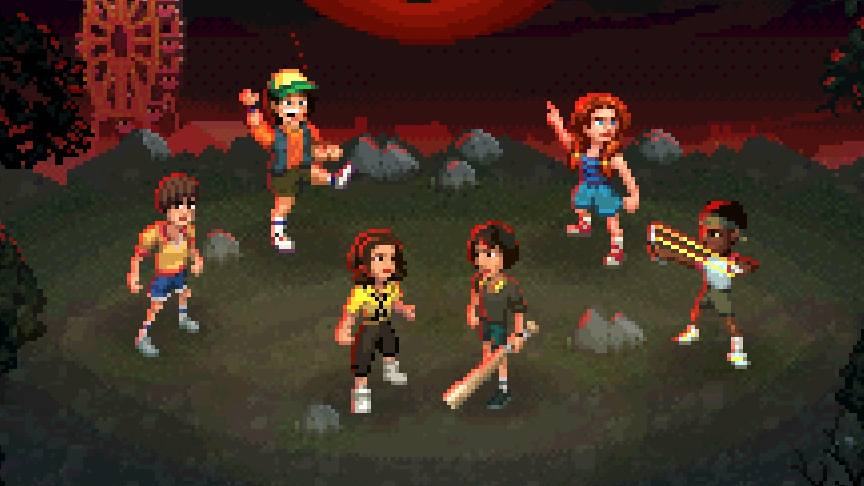 In season three of Netflix’s Stranger Things, the idyllic small-town peace of Hawkins, Indiana is once again shattered by from another dimension. Only this time, there’s a licensed tie-in video game to document all of the show’s pop culture references and 80s nostalgia in pixelated detail. And document it the game does, performing the role of stenographer admirably, if somewhat lifelessly.


Stranger Things 3: The Game came out on July 4 for Switch, Xbox One, PC, and PlayStation 4, alongside season three of the series on Netflix. I enjoyed the show but am disappointed by the game, which I’m about halfway through.

If you haven’t finished watching season three, you should wait to play the game, as it’s full of spoilers. It recreates all of the major plot beats of the show episode by episode. Then again, if you are done watching the show, I’m not sure what Stranger Things 3: The Game has to offer you.

The only people I can really see digging into the game and not being disappointed by what they find would be superfans desperate to spend just a little more time in Hawkins, no matter how shallow the visit.

Developed in the style of an isometric action role-playing game, it takes you through the story of the show by giving you quests that take you on a tour of its major landmarks.

Now you can beat up rats, solve short puzzles, and complete fetch quests at the Starcourt Mall or the Hawkins Swim Club. At the start of the game you can only control Mike and Lucas, swapping between them as necessary to defeat enemies and overcome obstacles.

Each of them has a different attack – Mike uses a baseball bat, while Lucas sports a ranged slingshot – as well as a special attack that costs points of energy to use. As the game progresses, new characters are introduced into the party that have secondary powers, like Dustin’s ability to hack computer terminals, which allow you to reach new parts of areas you’ve already visited. 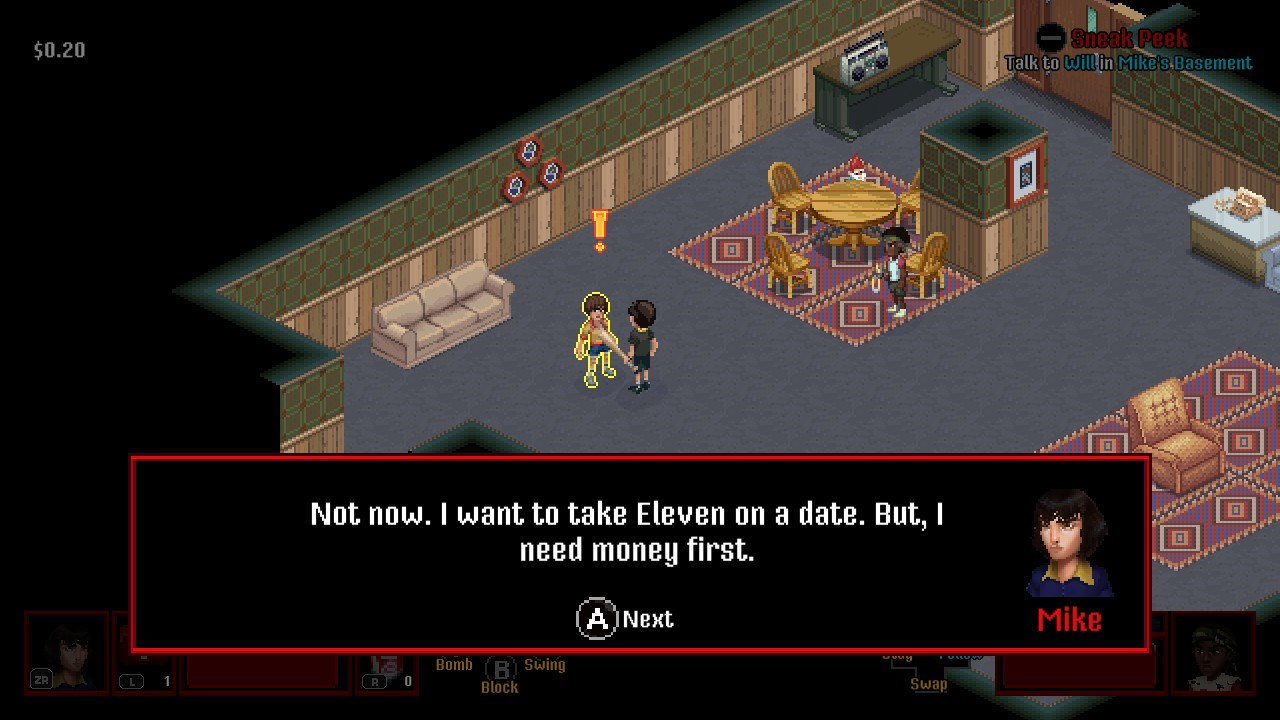 While each of these pieces handles well and gives Stranger Things 3 the semblance of a retro dungeon crawler, it’s no River City Ransom or Star Tropics. Characters don’t level up, and your inventory is limited to medkits and crafting items.

These items can be used to create equipment that grants special bonuses, like increased speed or modified attacks. For example, the Rock’em Shock’em item that increases Dustin’s special attack damage requires a battery, a spark plug, a toy robot, and a cattle prod, each of which can be found scattered somewhere in Hawkins, sometimes slightly off the beaten path.

Whether you’re hunting for collectibles or completing side quests, it never really feels like there’s much to explore in these off-script areas. So far, I haven’t come across a narrative scene of consequence that wasn’t just an abridged version of something that occurred in the show.

The cinematic montages that help give Hawkins’ locations a life beyond the dialogue spoken in them in the show don’t get explored in any more depth in the game. Instead, the space between scenes is filled mostly with trudging back and forth between quest markers, and the sight-seeing along the way is mostly hands-off.

You can buy key items for quests at the Starcourt Mall, but you can’t mess around in the arcade, or buy lunch with the change burning a hole in your pocket. Early on, I needed to buy perfume for Mike’s mum.

Instead of it being an opportunity to explore more, a saleswoman greeted me outside the store and presented the perfume to me unprompted as her only item for sale. 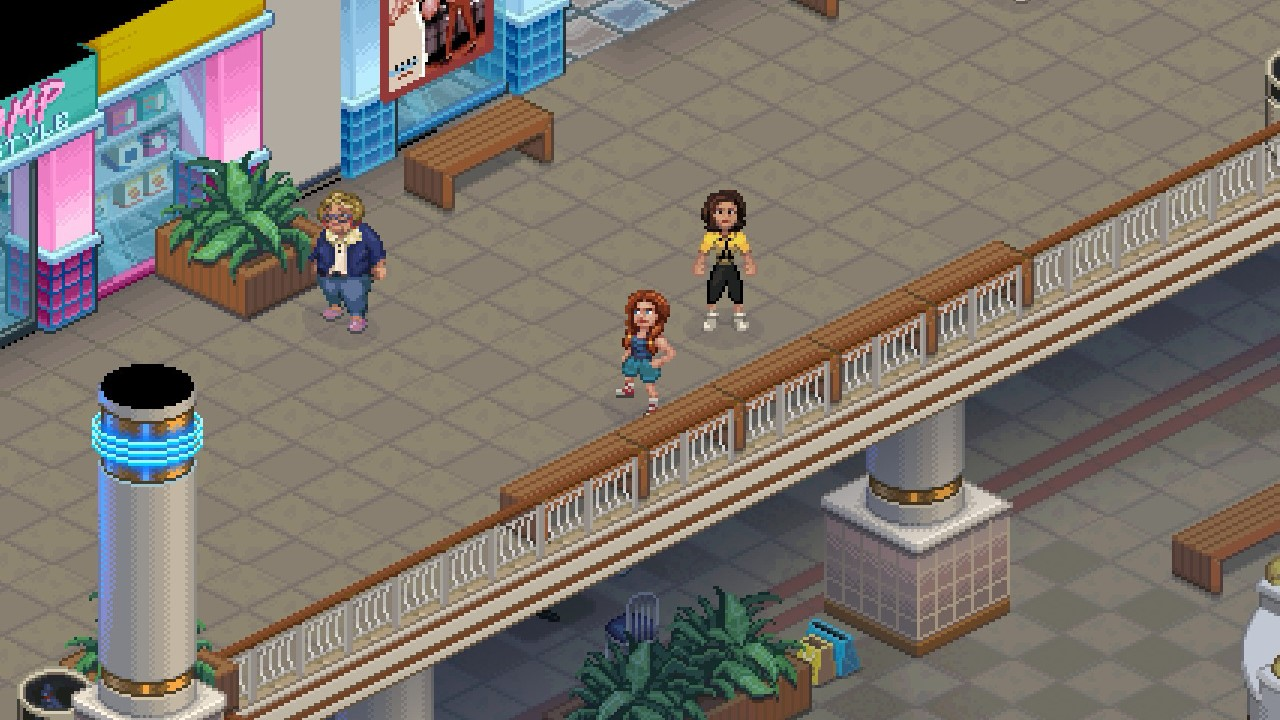 Where the game does stand out is in its boss fights. The couple I’ve encountered are by far the most interesting parts of Stranger Things 3: The Game so far, both visually and in terms of the way they encouraged me to make use of my characters’ complementary abilities to take them out without depleting all of my medkits.

They by no means rival the great 16-bit action RPG boss fights of my own youth, but as simple, flashy, beat-em-up affairs, they’re a more fitting tribute to the show’s nostalgia-fuelled horror than the dozens of dialogue boxes filled with accurate but unexceptional bits of its script.

For all of its ups and downs, season three of Stranger Things the show eagerly sets itself apart from the previous two by simultaneously getting goofier and more mature, juxtaposing schlocky scares with the charming vulnerability of emotionally-confused teens.

That’s a confident exuberance not shared by the game, which remains humourlessly shackled to its source material. As an interactive recap of the show’s third season, Stranger Things 3: The Game is adequate, but that’s about it.