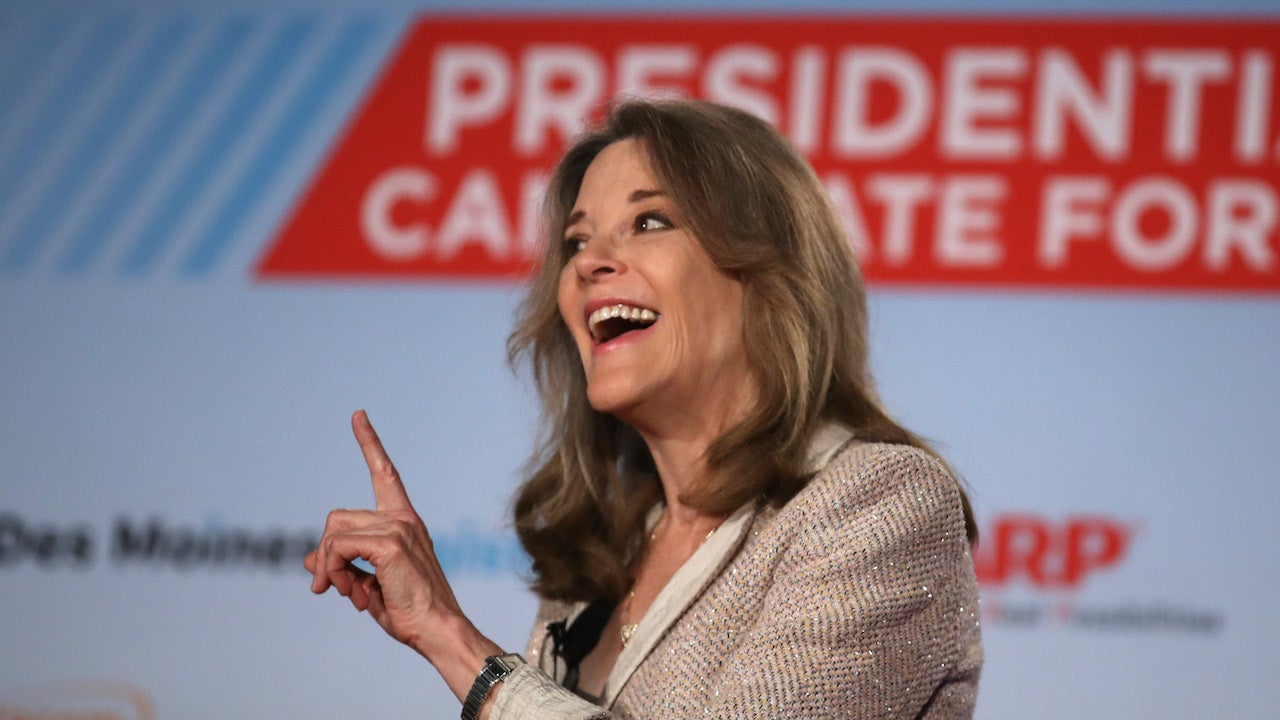 Democratic presidential candidate and self-help author Marianne Williamson is on the defensive. In her latest tweet she says that she’s “not a cult leader” and “not anti-science.” She even says that the idea she’s anti-science is laughable because she quotes Albert Einstein so much.


The only problem? Many of the supposed Einstein quotes that Williamson has shared over the years are totally fake.

I am not a cult leader. I am not anti-science (that one is almost funny, given how much I quote Einstein). And I am not an anti-vaxxer. Hoping that if I repeat it 3 to 4 times a day I might penetrate the field of lies created to keep some people out of the conversation.

People on the internet love to quote Albert Einstein. He was a genius, so everything he said must have been brilliant, right? But many of the most popular Einstein quotes that bounce around our strange and wonderful internet are completely fake, as we’ve demonstrated before.

How do we know they’re fake? Glad you asked.

The beginning of Williamson’s 2012 book The Law of Divine Compensation, opens with a quote attributed to Einstein that reads, “The most important decision we make is whether we believe we live in a friendly or a hostile universe.” But Einstein never said that.

The quote can be found in the 2000 book The Complete Idiot’s Guide to Spiritual Healing by Susan Gregg, and it pops up in plenty of leadership training books from the past decade, but there’s absolutely no evidence that Albert Einstein said it. As Wikiquote notes, the question of whether the universe is “friendly” shows up in a book from 1912, but it’s a much more generalized quote and it isn’t attributed to Einstein.

Williamson’s 2008 book The Age of Miracles: Embracing the New Midlife also includes a quote on page 178 that’s credited to Einstein: “I know not with what weapons World War III will be fought, but World War IV will be fought with sticks and stones.”

It’s a great quote, and probably true in a general sense, with the idea being that World War III would almost certainly be a nuclear war and the destruction would probably reduce the entire globe to rubble. But Einstein probably didn’t say it. As Snopes points out, the saying appears to have been a common joke after the first atomic bombs were used against Japan in 1945, and something similar was printed in newspapers from 1946.

A search of an online newspaper database shows over two dozen instances of the same joke. And in most cases, it’s credited to an Army Lieutenant at Bikini Atoll, where many atomic bombs were being tested at the time.

From the September 28, 1946 edition of the Nevada State Journal in Reno:

Joe Laitin reports that reporters at Bikini were questioning an Army Lt. about what weapons would be used in the next war.

“I dunno,” he said. “but in the war after the next war, sure as Hell, they’ll be using spears!”

Williamson’s book Tears to Triumph: The Spiritual Journey from Suffering to Enlightenment includes another fake Einstein quote, “Reality is merely an illusion, albeit a very persistent one.” But, again, there’s no evidence that Einstein said this.

The full quote appears on page 74 of her book (emphasis mine):

Looking around, we perceived the world with our physical senses — all of which report that the world is very real indeed. Yet what the body’s senses report to us as “real world” is in fact a giant, collective, mortal hallucination. In the words of Albert Einstein, “Reality is merely an illusion, albeit a very persistent one.” The material world is but a veil in front of a world that is more true, more real, more beautiful. It is a vast veil of illusion, created by the ego not to illuminate, but to hid, the world that lies beyond it.

It’s an incredibly popular quote online, but there’s no evidence that Einstein has been quoted accurately. What did Einstein really say? In a March 1955 letter to the family of his recently deceased friend, engineer Michele Besso, Einstein wrote:

Now he has departed from this strange world a little ahead of me. That means nothing. People like us, who believe in physics, know that the distinction between past, present, and future is only a stubbornly persistent illusion.

Williamson’s version is at least close to something Einstein actually wrote, but it’s still not accurate. Einstein himself died just a month after sending that letter.

Williamson’s books aren’t the only thing filled with fake quotes. Her Twitter account, which was started in 2009, contains plenty of other fake sayings attributed to Einstein. She repeated the World War IV quote on August 9, 2017, in a tweet and tweeted the “hostile universe” quote on September 6, 2012.

This Einstein quote became incredibly popular around 2005, and spread like wildfire across the internet but there’s no evidence that Einstein actually said it. The 2010 book The Ultimate Quotable Einstein lists the quote as misattributed and “probably not Einstein.”

But as the website Quote Investigator explains, this is another example of an old common joke that gets attributed to Einstein sometimes. Newspapers from the 1920s had a lot of different versions of this joke, but there’s no reliable evidence that Einstein ever said it. 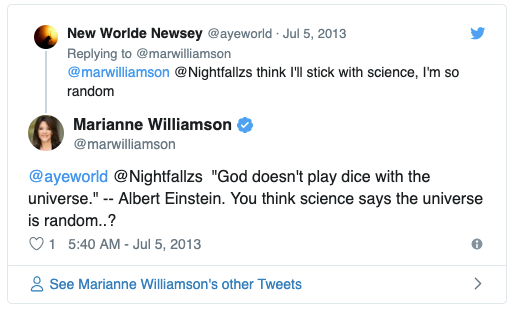 This is a quote that we debunked back in 2014 with our round-up of fake Einstein quotes. Einstein said something similar but definitely didn’t mean what Williamson thinks he meant.

The book Albert Einstein, the Human Side: New Glimpses from His Archives includes a private letter that Einstein wrote to physicist Cornelius Lanczos in 1942:

“You are the only person I know who has the same attitude towards physics as I have: belief in the comprehension of reality through something basically simple and unified… It seems hard to sneak a look at God’s cards. But that He plays dice and uses ‘telepathic’ methods… is something that I cannot believe for a single moment.”

This is another quote that doesn’t make any sense coming from a scientist like Einstein. The 2010 book The Ultimate Quotable Einstein lists this as another one that’s “probably not Einstein.”

"If at first idea isn't absurd, there is no hope for it." –Albert Einstein

This quote sounds neat, but it’s not from Einstein. The phrase is common in marketing books from the 1990s and New Age books from the 2000s, but it doesn’t seem to appear anywhere older than that. The Ultimate Quotable Einstein also says it’s “probably not Einstein.”

But Williamson isn’t the only politician who likes to share fake Einstein quotes. President Donald Trump has shared plenty of them on his Twitter account over the years, including some of the same quotes that Williamson has put out into the world.

Logic will get you from A to B. Imagination will take you everywhere. – Albert Einstein”

In fact, Trump has shared over a dozen Einstein quotes over the years, and they’re almost all fake. But this one might be the best, in light of how intelligent our president pretends to be on a daily basis:

“The difference between stupidity and genius is that genius has its limits.” – Albert Einstein

As the website Quote Investigator explains, there’s absolutely no evidence that Einstein ever said this, and even if he did, the saying probably originates in the 1860s. Einstein was born in 1879.

So there you have it. Williamson may or may not be anti-science, but however you feel about her as a Democratic candidate for president, one thing’s for certain: Her Einstein quotes, much like the current president’s, are total bullshit.