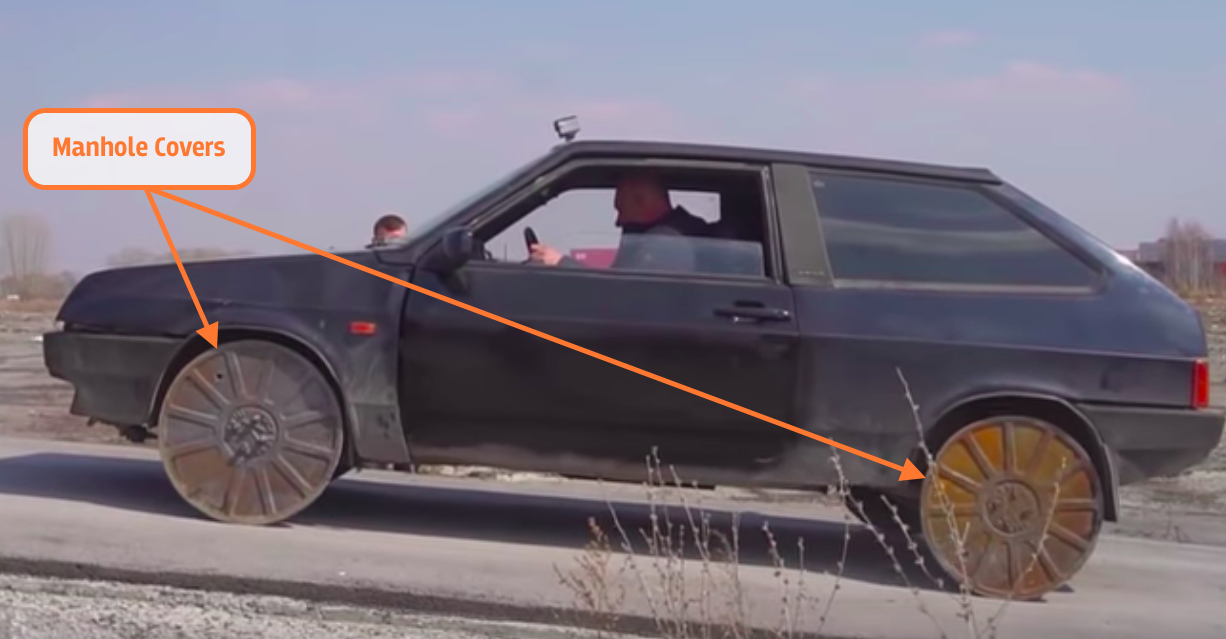 Manhole covers are round and tires are round, so it only makes sense to wonder whether the former can be used as a substitute for the latter, right? Wrong. That makes no sense at all. But YouTuber Garage 54 ENG is in the business of conducting nonsensical experiments, so watch him bolt steel drainage lids onto a crappy old Lada.

It’s been a while since I’ve posted a video from my second favourite YouTube channel, Garage 54 ENG. So here’s the host, Vlad, partaking in his typical shenanigans, which involve running experiments on Russian shitboxes – in this case, replacing a beat up Lada Samara’s wheels and tires with manhole covers.

The Garage 54 ENG team took a brake drum and set it roughly in the center of each manhole lid, measured with a ruler from the drum’s edge to the edge of each cover at multiple locations, thus ensuring that the drum was centred. Then the team used the holes in the drum to mark the manhole cover to ensure proper spacing to accept wheel studs. Then the mechanics drilled out the holes, installed the manhole covers, and tightened the lug nuts.

The manhole covers, which Vlad says are the skinnier type usually found on footpaths and generally not on roads, weigh roughly 25kg each, which is about what I’d expect some wheel and tire combos to weigh.

But of course, it’s not the giant steel cylinder’s contribution to unsprung mass that causes issues, it’s the stiffness and lack of damping compared to a squishy, air-filled rubber tire that makes these manhole covers such terrible devices for the important job of connecting the car with the road.

“Riding on pavement is just unbearable,” Vlad says as he violently bounces in the Lada, which keeps popping out of gear. Still, as bad as that is, it seems that the biggest issue is traction, which isn’t surprising, considering the contact patch is tiny, smooth, and hard.

It doesn’t take much for Vlad to get the car stuck in soft muck, though there is one key benefit to the lack of traction: it makes for epic violent burnouts and doughnuts.

And Vlad takes full advantage of that.