The Venture Bros. Creators Ponder Nerdiness And Share A Deleted Scene From Season 7 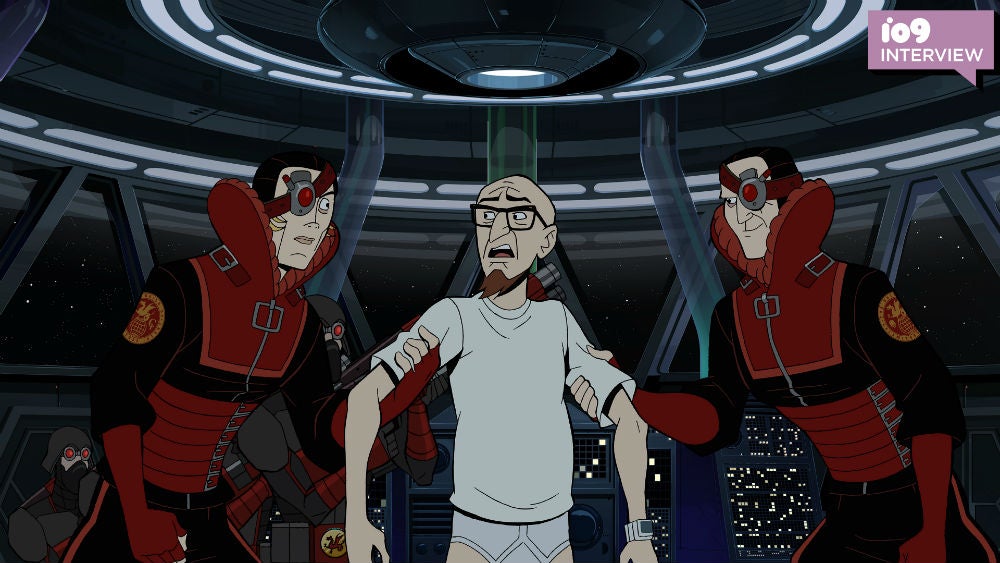 Rusty’s in yet another predicament on<em> The Venture Bros.</em> (Image: Adult Swim)

Season seven of The Venture Bros. wrapped up in October, but fans of the cult favourite show—who’re accustomed to many, many months between seasons—will find the Blu-ray and DVD worth the wait.

All 10 episodes have commentary from creators Doc Hammer and Jackson Publick, plus there’ll be deleted and extended scenes. We’ve got a sneak peek at the release, plus a chat with the masterminds behind Adult Swim’s longest-running original series.

First, here’s a deleted scene from episode four, “The High Cost of Loathing.” In the episode, down-on-his-luck supervillian the Monarch decides to rob a bank after learning his trust fund is overdrawn—only to be thwarted by the Brown Widow, a familiar-looking arachnid superhero who also happens to be Dean Venture’s college roommate. (As you’ll see, that’s not the only thing that gets thwarted before the deleted portion of the scene ends.) There are a few more bonus snippets here, including a damn good argument against ever renting a room from Hank Venture. Check it out!

Here’s a look at the Blu-ray packaging, followed by an interview with Doc Hammer and Jackson Publick (also known as Christopher McCulloch, but he goes by Jackson Publick as part of all things Team Venture, so we’re sticking with that). 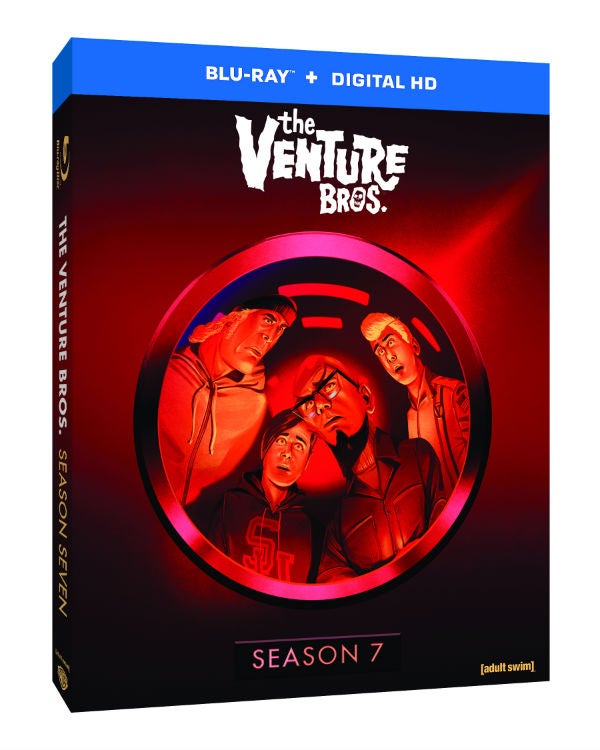 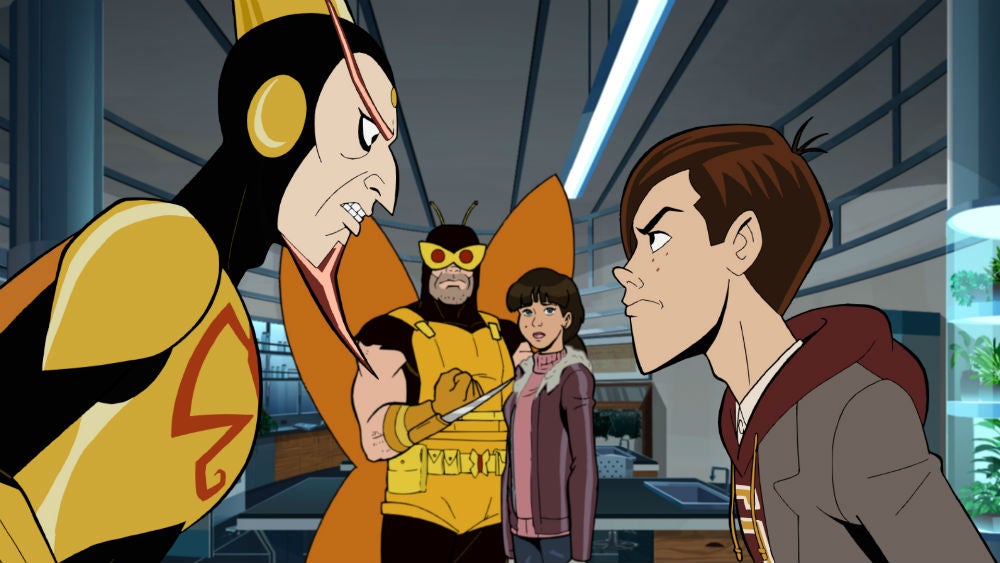 io9: Since we’re sharing a deleted scene as part of this post today, and we don’t often hear about deleted scenes when it comes to animated TV shows, I was wondering how you decide when and where to cut an episode of The Venture Bros.?

Doc Hammer: Mostly timing issues. If the scenes actually make it to production, like they’re fully animated, they didn’t fit in timing. If they’re animatic, sometimes that was cut for other reasons, like for flow of the show. But I find that most of them are just cut because we’ve got to get it into…what is it? Twenty-three point seven?

Hammer: It’s crazy. It’s not a real half-hour. That’s usually what happens—you wouldn’t go to the point of animating it just so you could drop it on a special feature.

Publick: Yeah, there usually isn’t any extra footage. It’s maybe because, either we underestimated how long the credits are, or it means that we expanded something else. Maybe there was some kind of special little surreal thing that we did a lot of retooling on in post-production, and then, “Oh no, it’s long!”

Hammer: “We should have never included the love scene between Hank and the towel!”

io9: The deleted scene we’re sharing in this post is interesting because it features police officers, which is something we don’t usually see on The Venture Bros. Do cops just not really fit into the superhero/supervillain world of the show, or is there another reason they don’t turn up very often?

Publick: The New York accent cop, cribbed from an old George Carlin routine. [Laughs.] The same guy, every time. “Move along!” What usually happens is, the internal logic of our show is that anything that happens between good guys and bad guys, between antagonists and protagonists, is self-policed. Matter of fact, the self-policing of these organisations is a major portion of our show. We deal with treaties, and we deal with how an organisation exists that does nefarious things. Part of the logic of our show is that we look at the ideas of heroes and villainy in like a hyper-logical sense—how can somebody do that his whole life, be a professional arsehole? And we created an organisation that makes it so you can be a professional arsehole.

Every once in a while we use a local civilian authority to just, like, pop that bubble though. The ones that kind of go, “Oh, by the way, you’re all a bunch of people dressed as idiots yelling at each other in the street…maybe take this inside?” 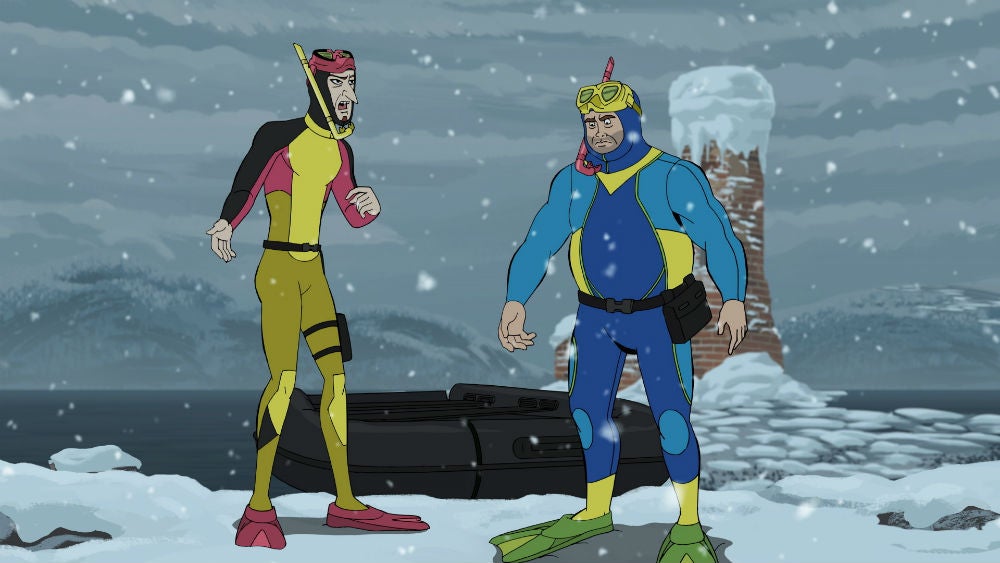 The Monarch and his ever-loyal Henchman 21, aka Gary. (Image: Adult Swim)

io9: Season seven had some big reveals for the main characters, especially that cliffhanger when the Monarch finally learns that he’s related to Rusty Venture. Why was that something you wanted to get out into the open this season?

Hammer: I’m glad that is perceived as a cliffhanger…because we’re playing with that, and if it’s not perceived as a cliffhanger, we’re screwed! [Laughs.] It needs to come out in the open because it is something that’s been alluded to for so long that eventually, you have to pay that off. It’s just the proper way to tell a story. You can’t keep doing that unless that is the point, and “are they or aren’t they” is not our point. It’s an aspect of the show—the show is not based on everybody’s relationship. But it is an aspect of the show, and sometimes you have to pay off those aspects.

io9: Last year, you spoke to io9 when the Venture Bros. art book was coming out, and part of that interview was about how it felt like a vindication that nerd culture has become such a big part of mainstream culture. Have your feelings about that changed, especially after we just saw Avengers: Endgame basically take over the entire world?

Hammer: If nerd culture is pop culture, is it truly nerd culture anymore? Don’t you think that the nerds, who will never go away…you’ve met them! You may be one! We’re one! We don’t fit in. We’re not part of mainstream things. We’ll watch mainstream things. We were raised on Star Wars, which I promise you is not an independent movie. It was huge, and that was quite some time ago. So, nerd culture always had a foot in pop culture. It’s now, a torso has gone into pop culture. But I still think that nerd culture is not, and will never be, the mainstream. Even though we won! We’re weird, and we’ll create something new.

Nerd culture is like being a fan. And fans of rock bands, when they become popular, will eventually go, “Oh, I don’t like this, because you like it, and I liked it so much when nobody liked it.” Which is good for us! Because we are not a huge television show. I think we’re nerd-approved. So when people go, “Oh, I love all this stuff!”, at least you can go, “Well, you don’t watch Venture, so therefore you’re not super into all of it.” We’re still currency. We still work as nerd money.

io9: I’m sure you can’t speak too specifically about this, but do you have an endgame in mind for The Venture Bros.? Where do you see the show going in future years?

Hammer: Jackson and I are of the opinion that you can make a finale, but you don’t have an endgame for the characters. These people actually exist. When you decide that, at the end of it, everything goes to hell in flaming fury, it’s a letdown to something that you’ve loved deeply. If we stop making the show, we will conclude plot threads, but we’re never going to end the show. It’s just not in our nature to do that. That’s what we’re feeling currently. Of course, the minute one of us has some cataclysmic idea, that may change, but that’s kind of the philosophy we’re feeling most right now. Nope, we’re gonna keep going, you know, a little more Mad Men ending than Endgame, I guess.

io9: Any hints on when we can expect season eight?

Hammer: We can’t say anything about anything right now, but you can speculate.

Publick: [Laughs.] We can say we’re making stuff up for season eight. That’s what we can say. Which we would probably do even if we didn’t get picked up. 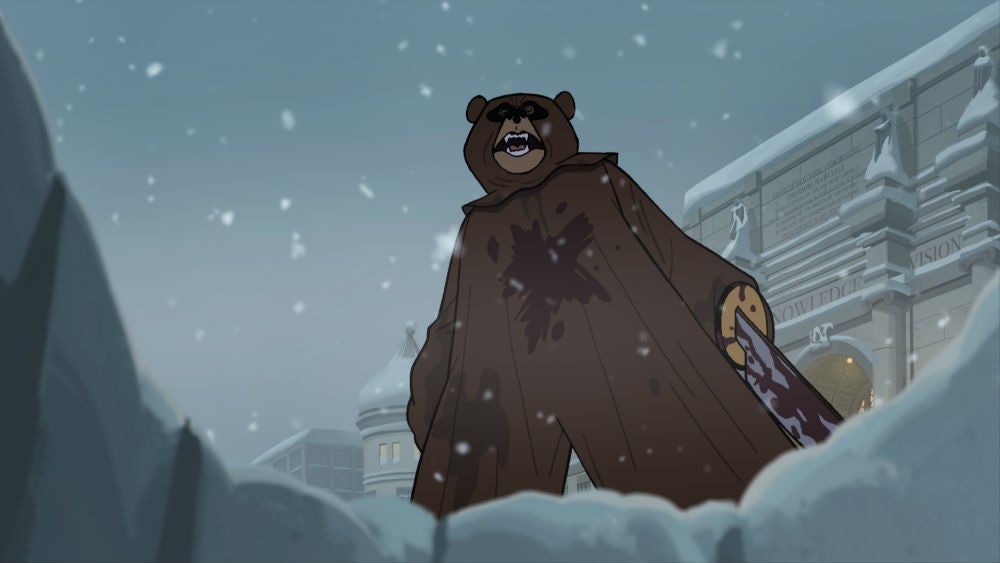 The Venture Bros. season seven Blu-ray and DVD is out June 4 in the U.S.