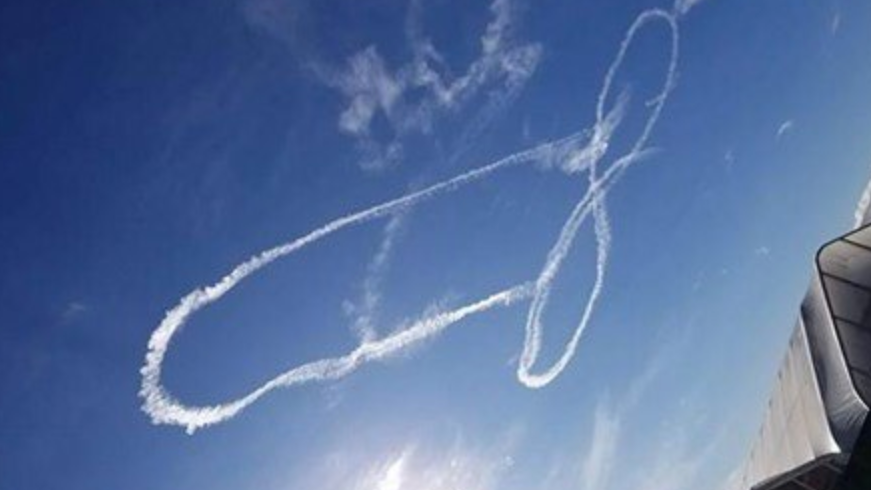 In 2017, two creative Navy lieutenants cruising the sky of north-central Washington realised their jet’s contrails were especially thick and puffy, so they decided to make atmospheric artwork. Freshly released recordings give us a glimpse into the creators’ process.

His sky penis went viral after onlookers snapped photos and posted the images on social media and shared them with local news station KREM 2, which broke the story. Authorities from the Naval Air Station Whidbey Island confirmed to the news outlet that an aircraft from their base was involved in the aerial graffiti.

“The Navy holds its aircrew to the highest standards and we find this absolutely unacceptable, of zero training value and we are holding the crew accountable,” officials said in a statement to KREM 2.

Now, the story of how the sky penis came to be is finally public, thanks to a Freedom of Information Act request made by The Navy Times.

The documents redacted the identities of the pilots, but they show two lieutenants flying as “Zapper 21″ were behind the penis. The pilot’s cockpit mate, an electronic warfare officer (EWO) first introduced the idea, based on a cockpit conversation captured by a recording system.

“Draw a giant penis,” the EWO said, according to the Navy Times. “That would be awesome.”

The pilot then joked, “What did you do on your flight?… Oh, we turned dinosaurs into sky penises.”

The EWO egged the pilot on and the pilot began plotting it out. “I could basically draw a figure eight and turn around and come back. I’m gonna go down, grab some speed and hopefully get out of the contrail layer so they’re not connected to each other,” he said, according to the report.

Even before drafting the shaft, the lieutenants knew it could cause a stir. “Dude, that would be so funny,” the pilot reportedly said to his partner. “Airliner’s[sic] coming back on their way into Seattle, just this big fucking giant penis. We could almost draw a vein in the middle of it too.”

The report lay’s out the creative struggle of making a sky penis, according to the Navy Times:

“Balls are going to be a little lopsided,” the pilot advised.

“Balls are complete,” he reported moments later. “I just gotta navigate a little bit over here for the shaft.”

“Which way is the shaft going?” the EWO asked.

“The shaft will go to the left,” the pilot answered.

“It’s gonna be a wide shaft,” the EWO noted.

“I don’t wanna make it just like 3 balls,” the pilot said.

After the pilot had completed the composition, the lieutenants were amazed that the contrails did not immediately dissipate. Prideful joy turned to fear.

“Soon after, I realised the extent of our actions,” the pilot reportedly wrote later. “That the contrails were remaining longer than predicted.”

The pilot then tried to scrub what he had done. “I flew one pass over it essentially trying to scribble it out with my contrails. That pass was ineffective,” he reportedly wrote.

It didn’t take long for the lieutenants to be contacted by their commanding officer, who had been alerted of a sky penis in an area where his squadron jets had been flying. “They both apologised and were at once remorseful,” the commanding officer wrote in a report, according to the Navy Times. Gizmodo

asked representatives for Naval Air Station Whidbey Island if the pilot was disciplined but we did not immediately receive a response.

An official investigating the incident assessed that the “crude, immature, and unprofessional” art was not in line with the “character” of the lieutenants.

“Even so, it has caused the United States Navy severe embarrassment in the public arena and jeopardizes the strategic narrative that underpins the justification of the flight hour program,” the investigator wrote. “Additionally, the absence of relevant, effective, professional training highlighted by the sophomoric sky drawing indicates a potential waste and misuse of government resources.”

According to the report, the investigation found “no indications of poor command climate and no evidence or allegations (of) overt sexism or misogyny.”