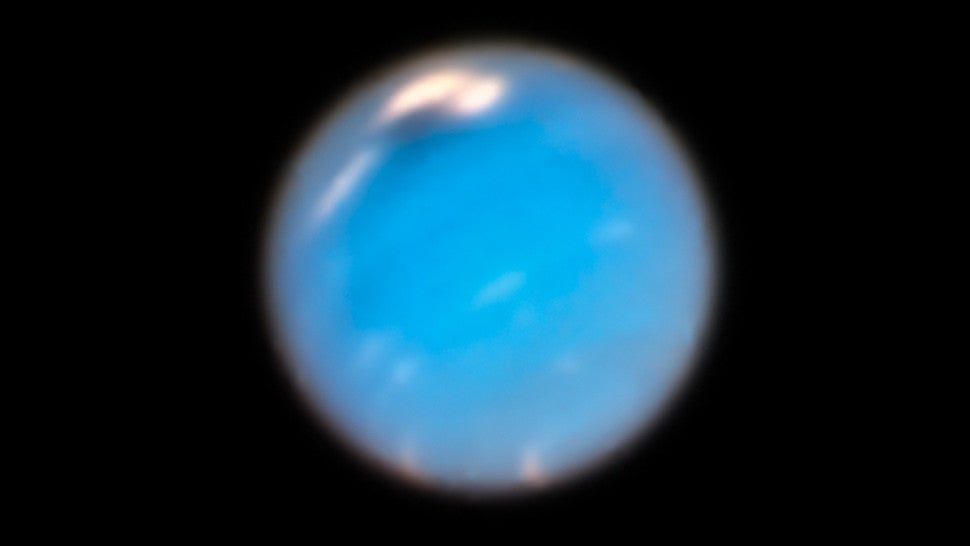 The new dark vortex on Neptune (top) along with the associated bright methane clouds. This composite image was captured by the Hubble Space Telescope in September and November 2018. (Image: NASA/ESA/GSFC/JPL)

Late last year, astronomers detected the sixth known dark vortex on Neptune. This time, however, scientists were able to chronicle the formation of this swirling storm over the course of several years, offering new insights into these enigmatic and ephemeral weather features.

The discovery of Neptune’s latest dark vortex, and the appearance of a dramatic white cap on Uranus, were announced earlier this year. The findings were made possible by the Outer Planet Atmospheres Legacy (OPAL) program, a long-term side project of the Hubble program to map annual changes to the two ice giants.

Two new research papers published today in Geophysical Research Letters and the Astronomical Journal are contributing to our understanding of the new surface feature on Neptune, including fresh insights into how these dark spots form, the frequency of their appearance, and how long they last. 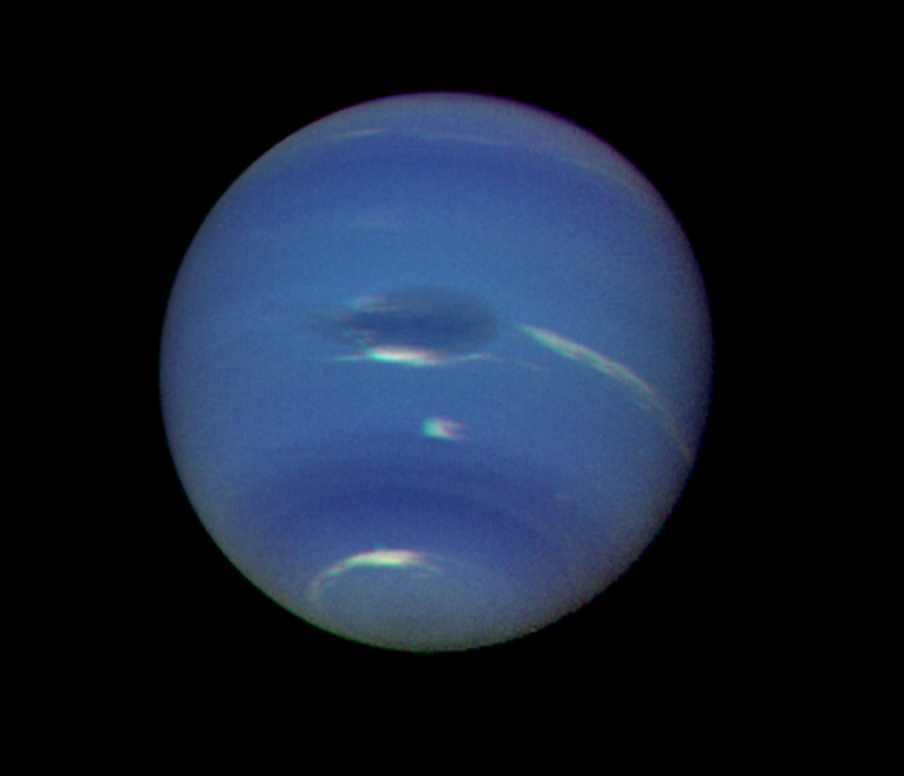 The large dark vortex observed by Voyager 2 in 1989. (Image: NASA/ESA/GSFC/JPL)

The new dark vortex on Neptune was detected in Hubble data collected during the autumn of 2018. It’s the largest storm to appear on the planet since the Voyager 2 flyby of the system back in 1989. This is now the sixth dark spot seen on the ice giant, two of which were detected by the NASA probe, and four by Hubble.

The new dark spot is practically the same size and shape as the large one spotted in 1989, at roughly the size of Earth.

Though dramatic, these surface features don’t last for very long, clearing up after several years. This runs in stark contrast to the Great Red Spot on Jupiter — a giant storm that’s been churning away for over a century.

But like the Great Red Spot, the dark vortices on Neptune emerge in areas of high pressure, whereas storms on Earth form in areas of low pressure.

As the two new studies point out, this is the first time scientists have observed the formation of a dark vortex on Neptune. Amy Simon, a scientist at NASA’s Goddard Space Flight Center who leads the OPAL mission, along with Michael Wong and Andrew Hsu from the University of California Berkeley, were studying Hubble images of Neptune’s prior dark vortex, which emerged in 2015, when they noticed small, bright clouds in the area where the 2018 spot would eventually emerge. This came as a surprise to the team as they weren’t expecting to see a new dark vortex so soon.

“The previous dark spots were all discovered fully formed, with no observations to compare with from prior to its discovery,” Simon told Gizmodo.

“In this case we have several years of Hubble data from before we saw the new spot. Tracing backwards, we can see hints of high clouds in that area in those earlier years.”

Writing in the new Geophysical Research Letters paper, Simon and her colleagues said the associated clouds appeared at the same location about two years before the new dark spot emerged — an important clue suggesting the storms originate much deeper within the planet’s atmosphere than is typically assumed.

“Every high cloud doesn’t indicate a new storm, of course, but what this does tell us is that something was perturbing the atmosphere before we could see a new storm,” she said. “These high clouds are believed to be like clouds that form as air rises up over a mountain.” 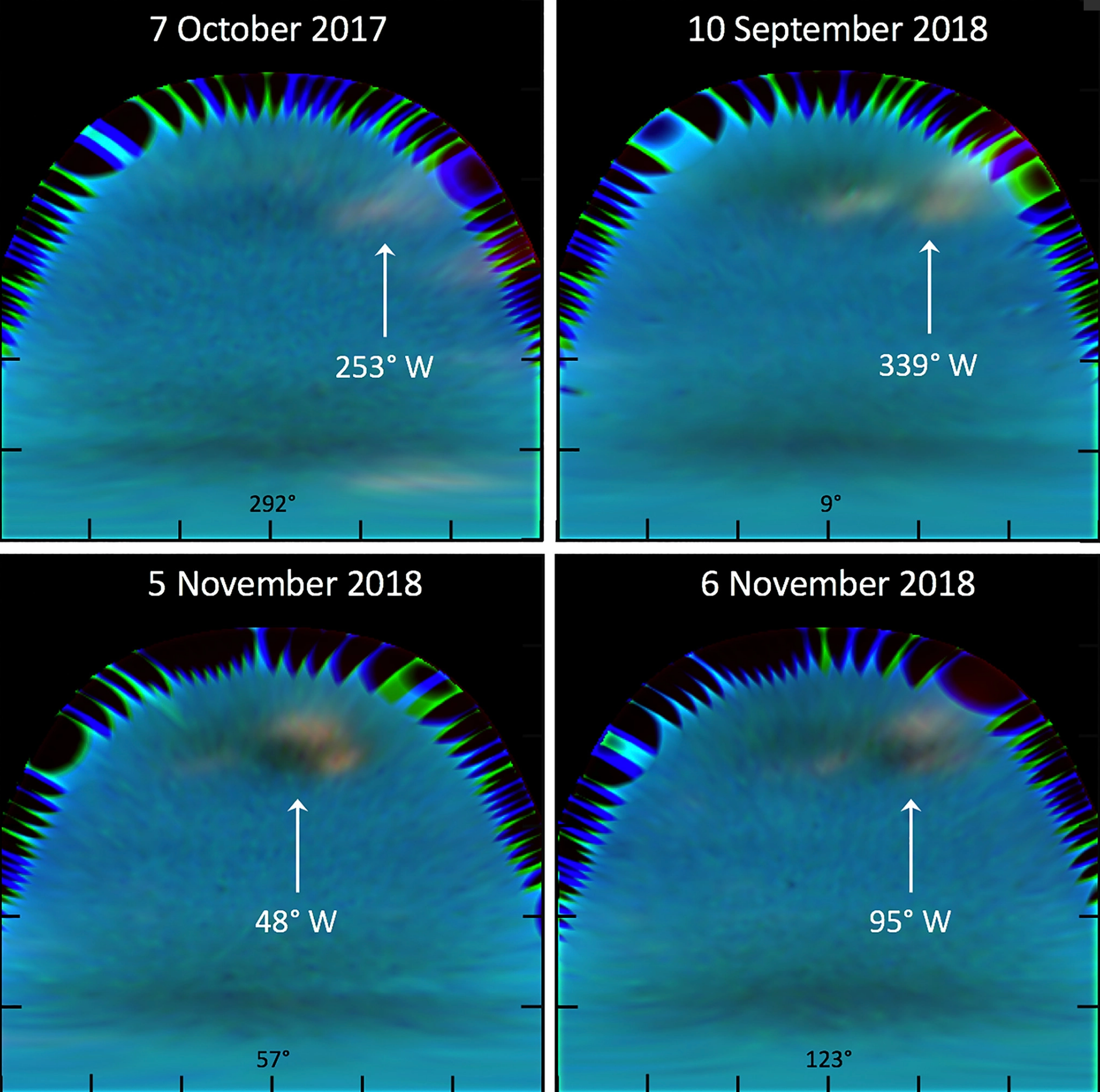 The white clouds are comprised of methane ice crystals, which gives them their distinctive bright white colour. The brightest of these methane clouds were observed in 2016 and 2017. Using computer models, Simon and her colleagues found that as the depth of the storm increases, so too does the brightness of the companion clouds. These storms don’t just suddenly flare up overnight.

Rather, the formation process takes several years, according to the new research. The “drift rate and formation history of the dark vortex indicates a deep origin,” the authors wrote in the new study.

The researchers estimate that wind speeds are almost four times as strong at the bottom of the dark vortex as they are at the surface. The winds at depth are moving at 100 meters per second, which is comparable to Jupiter’s Great Red Spot.

But unlike the Jovian storm, which is relatively fixed in place, the dark vortices on Neptune drift across latitudes. Eventually, strong winds cause the storms to break apart and disappear.

In the accompanying Astronomical Journal paper co-authored by the same trio, the researchers said the dark vortices on Neptune appear about every four to six years. Overall, the dark spots have lifetimes of at least one to two years, but no more than six years. More observations in the coming years should refine these estimates further.

“We will continue to observe this storm, of course, but the next step is to run computer simulations of a deep disturbance and see if we can find the conditions that cause a storm to form and grow,” Smith told Gizmodo.

“We will also be tracking the storm’s size, shape, and motion to learn more about the deeper wind and temperature fields because those can govern what we see at the cloud tops.”

What would also be good is a satellite permanently stationed in orbit around Neptune (and Uranus, for that matter). Hubble is great, but it’s too far from the outer planets, and it’s often performing other astronomical duties.

It’s high time that NASA and other space agencies plan for something like this. These outer planets are just too damned interesting to ignore.