Was Jane Jetson A Child Bride?

A viral tweet about the 1960s TV show The Jetsons recently brought up a troubling question. Was Jane Jetson a child bride? The answer: Not quite. But it’s easy to see why people might be outraged.

just did the math on these ages and unless age of consent is abolished in the future i’m afraid george jetson is cancelled pic.twitter.com/Ky1et7Z94S

If we do the maths on the admittedly fictional relationship between George and Jane—specifically, when their daughter Judy was born—then Jane was just a teenager when Judy was conceived. And the seven-year age difference between George and Jane doesn’t help matters. But marrying young was less abnormal when the show premiered in 1962. In fact, the median age for marriage was at its lowest in the 1950s.

Let’s start with the facts. Well, the cartoon “facts,” as it were.

George Jetson is 40 years old during the first season of the CBS show in 1962-63. How do we know that? We can watch episode fourteen of the show, titled “Test Pilot,” which originally aired in the U.S. on December 30, 1962.

During the episode there’s a mix-up with some medical tests and George is told that he’s going to die soon. This premise was an extremely popular one in 20th century comedy, by the way. So George agrees to test a new spacesuit created by his boss’s company that makes someone invincible. He spends the entire episode doing reckless and idiotic things because he’s convinced that he’s going to die. But sure enough, he eventually learns the truth: he’s not going to die. In fact, the doctor says that he could live to be 150. That’s when we learn George’s age.

“Please Mr. Spacely, don’t launch those missiles! I’ve got 110 good years ahead of me,” George shouts as his boss is about to shoot “anti-missile missiles” at him to prove the durability of the suit.

The show also tells us that Jane Jetson is 33 years old. How do we know that? From comments the characters make in the very first episode of the series, titled “Rosey the Robot,” which first aired on September 23, 1962.

Judy calls her mum “crazy” and “way out,” much to Jane’s confusion. Judy explains that this is how people used to talk and that she learned it in Ancient History class. Judy teases that her mum should remember.

And here’s where there’s some confusion. Judy Jetson is 15 years old during the first season. The Wikipedia page erroneously says she’s 16, but we learn from the first episode that Judy is almost certainly 15. And as you can see, that difference matters when you consider that 18 is considered the age of consent in much of the United States today.

As a side note, The Jetsons was written exclusively by men, as you might have been able to guess from episodes like “Jane’s Driving Lesson,” where the entire joke is that women are bad drivers.

Judy is 15. That settles that.

Was Jane a child bride?

The only conclusion? No, Jane wasn’t a child bride.

But if we do the maths, Jane gave birth to Judy when she was 18 and George was 25. Using Wikipedia’s incorrect numbers, Jane would’ve been 17, leaving open the possibility that Jane was 16 years old when Judy was conceived. That’s problematic, obviously, though there are many states in the U.S. where 16 is legally the age of consent.

Interestingly enough, the average age for marriage by Americans was at its lowest in modern history during the 1950s. And both men and women actually got married when they were older before midcentury.

In the mid-1950s, the median age at which people got married was about 22 years old for men and about 20 years old for women. That’s the median, meaning that plenty of girls got married in their teens during the 1950s. But that’s significantly lower than the period from 1890 to 1940, when the median age for first marriages was closer to 25 for men and 22 for women. And obviously much lower than the following decades, as you can see from this graph by the U.S. Census Bureau. 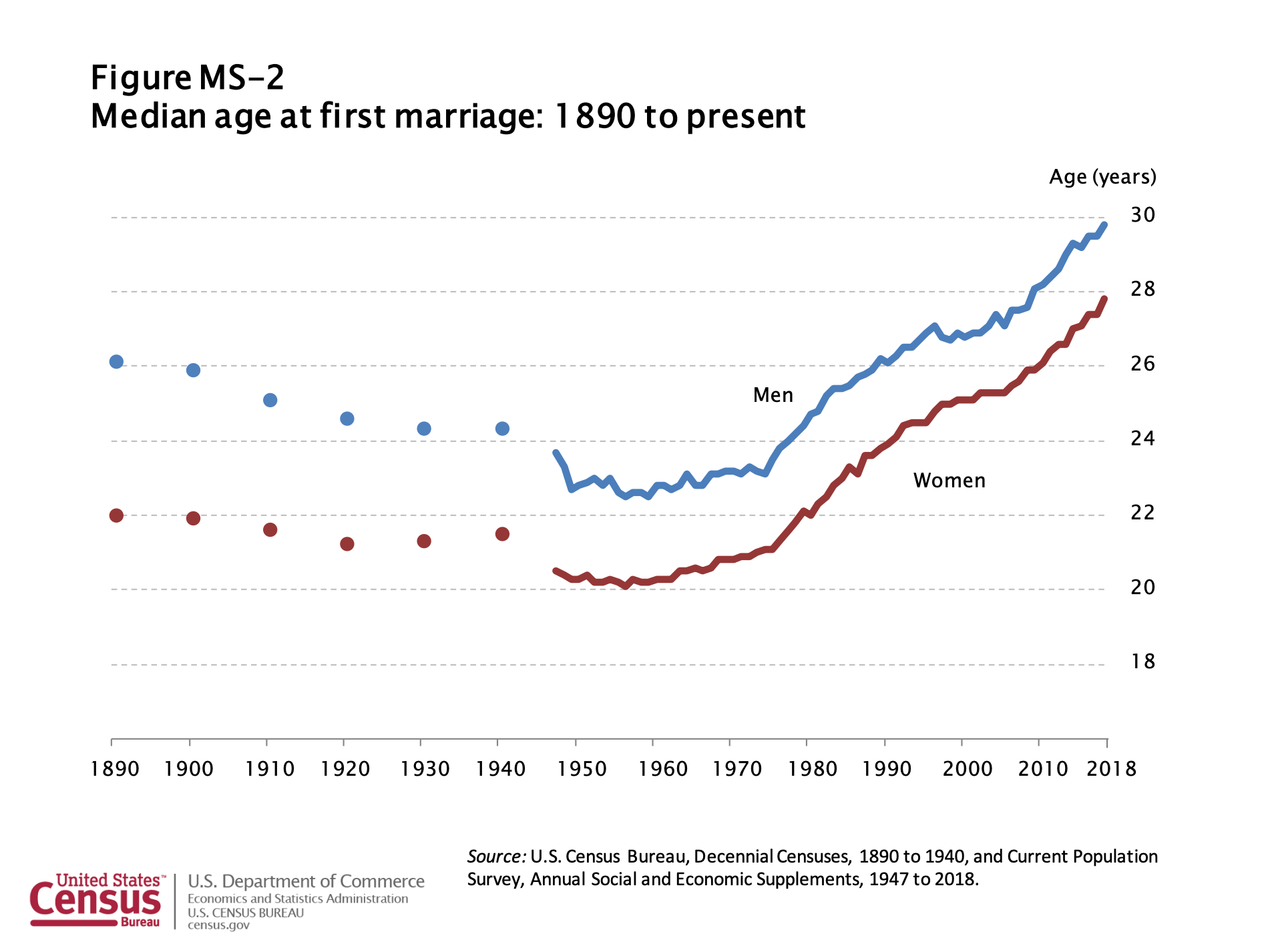 Today, the median age for marriage is about 30 for men and about 28 for women, much higher than it’s ever been.

Should George Jetson be cancelled? Obviously you can make up your own mind about whether the age difference is creepy. Personally, I vote yes, it’s creepy. But whatever you decide, the age of consent hasn’t been lowered in the future—at least not according to the Jetsons.

We can chalk this one up as another internet myth about The Jetsons, much like the claim that there’s a horrifying dystopia on the ground level of the Jetsons universe. What’s actually there? Birds and hobos. Both walking, as it turns out.