Working out at home is part of my routine. My roommate and I set up her old arse Windows laptop on a living room chair and play legendary fitness DVD Insanity once a week when we’re not too lazy. Intense fitness guru Shaun Thompson guides us through the brutal workout that includes planks, lunges, and suicides for an hour until we’re exhausted.

Editor's Note: The Mirror is currently only available in the USA.

But as with all workout videos, Insanity lacks the motivation and instruction I’d get at a class with a real-life trainer; it’s easy to slack off. New fitness system Mirror hopes to bring that personal touch to workouts at home by streaming boutique-quality classes onto a neatly mounted display. After working out—and living with—Mirror for a few weeks, I can say this thing is a definite improvement to watching an early 2000s video on a precariously perched laptop. Whether it’s the futurist fitness hack I originally envisioned it to be, is an entirely different question. 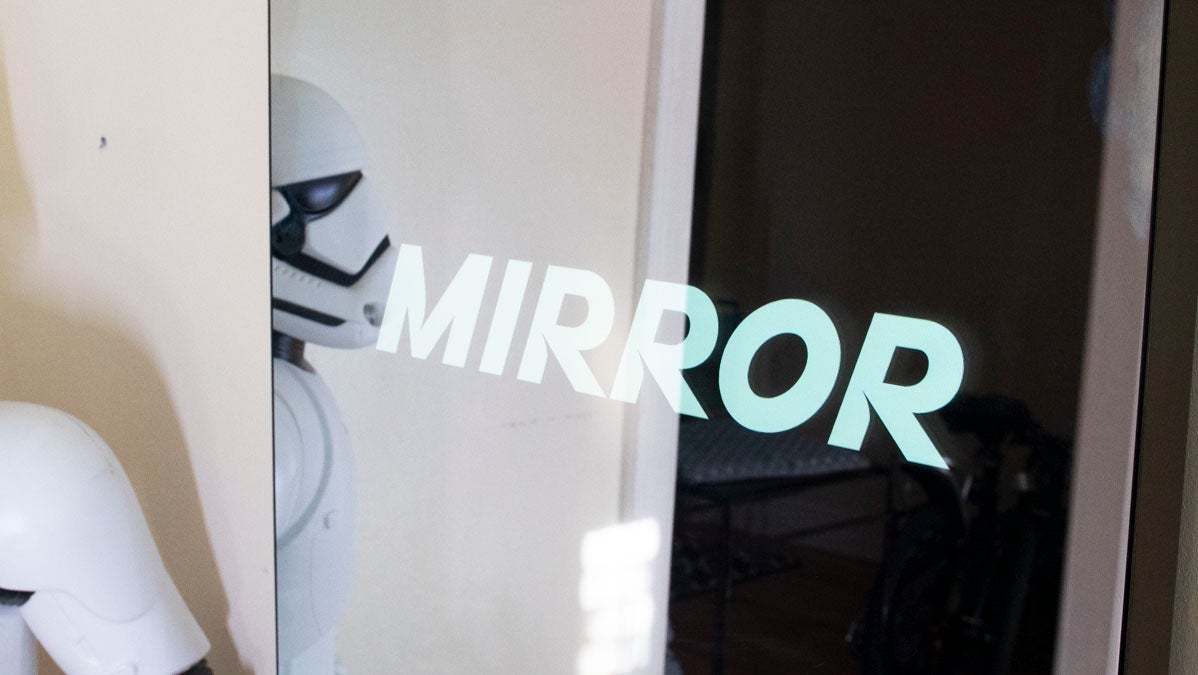 Streaming hiccups. Some of the best one-on-one features aren't enabled yet.

Launched in September, Mirror, as its name suggests, is a full-length reflective screen in which I can see myself. But really, the $US1,495 ($2,099) gadget is a camouflaged 40-inch HD 1080p display pimped out with a camera and mic. With a tap on the iOS companion app, it flickers to life, and when I fire up a class, I’m watching myself and my instructor on the mirror-screen, crisp as can be—save for some finger smudges I had to wipe off with an included cleaning cloth.

Mirror was designed for people like me who are low on time and feel triumphantly accomplished if they can squeeze in exercise three times a week. What if you could take that HIIT class on your own time? Founder and CEO Brynn Putnam, who has worked in fitness for more than a decade, said she was inspired to make the device when her gym time suddenly cratered after juggling the demands of motherhood.

Mirror is more than just streaming Buns of Steel. Yes, it’s in line with other on-demand class subscriptions you can do on your own time, like fitness app Asana Rebel which offers guided Yoga workouts for about $US10 ($14) a month or the Freeletics app, which offers a personalised training regimen for as little as $US4 ($6) a month.

With its pricey proprietary hardware, however, Mirror is cut from the same cloth as insurgent fitness startups like Peleton with its $US4 ($6),000 treadmill, $US2,245 ($3,152) bike, and $US20 ($28) per month subscription. Mirror is remarkably similar to the Peloton concept except that where you can run on a treadmill and ride the bike without any classes, the actual physical Mirror is useless unless you pay $US39 ($55) a month to access the classes. Buying the device requires a one-year commitment to the subscription.

Installation with the company’s free white glove service took about 10 minutes, plus some extra time to clean up the mess my cat made out of plastic and boxes. You can choose to either mount the device or lean it against the wall. Since I rent, I opted for the latter. I ran into some problems getting an update for the device to install, which I was later informed was due to my slow wifi. (More on this later.)

This is what it looks like when you launch the app. (Screenshot: Yessenia Funes, Gizmodo Media Group)

What’s on the Mirror is entirely controlled via its iOS app (The company still hasn’t set a date to roll one out for Android). You can launch one of nine types of exercise classes led by nine different instructors on-demand with options like barre, yoga, and more cardio-intensive boot camp and boxing classes. Some classes last an hour; others are just 15 minutes.

When you first launch the device, you answer some questions about any injuries or limitations (like pregnancy), so the system can offer you alternative exercises during the workout. This is very similar to the typical experience when you first walk into an IRL studio.

Like any other class, you just follow the instructor. Mirror instructors demonstrate you what move you’re going to do, and the app tells you beforehand if you need anything extra like a dumbbell or band. The Mirror itself informs you how long you’ve got until the next set of exercises comes up, and you can even skip ahead if you’re in a rush.

If you prefer a more interactive experience, which is part of what attracted me to this pricey thing in the first place, there’s the option to go with the live class schedule. I saw people from Seattle, New York, and Miami in my live boxing class. These classes are limited to certain times of the day and week, but they sometimes change. That way, if you can’t make a live class one week, maybe you can the next. For the most part, however, instructors keep their schedules consistent.

During these classes, the trainers often encourage you to pick up your phones and take a selfie or send an emoji through the app, which is visible to everyone taking the class at the time. The app offers emoji like ???? and ????, which appear on the Mirror when you click them. One instructor, Gerren, calls his class the “100 Team,” which added a personal, welcoming touch to what could otherwise be an isolating experience. He started the class asking us to send the ???? emoji to show support. It was a bit annoying to have to grab my phone constantly in the middle of a workout, but I enjoyed the interaction.

I tried yoga, boxing, cardio dance, and a simple stretch class. Every instructor has a unique personality and method, similar to what you get in real life. Also, the instructors are diverse: There are men and women of various races and ethnicities. That’s a big plus for me. I once attended a white-dominated class in which the white instructor felt the need to comment on the reggaeton music she chose by saying, “Who knows what they’re saying!” That was annoying. I experienced nothing of the like here. I think that’s, in part, because we’re all anonymous users. Some users add photos, but you don’t have to. You can keep your identity secret.

If you have an Apple Watch or Bluetooth heart rate monitor, you can connect it to the device. I own neither, but the Mirror includes one. The heart rate monitor is a key part of the experience. It lets instructors see how hard you’re going and shout you out. The device itself will give you on-screen prompts like, “Way to go!” if your heart rate is past the target you pick when you set up the device. If you’re slacking off, it’ll ask you to pick up the pace. The monitor allows you to keep track of your progress so you can, in essence, compete with yourself.

My progress screen that one week I went hard. (Hard for me is three workouts in one week.) (Screenshot: Yessenia Funes, (Gizmodo Media Group)

The screen also tells you how many calories you’re burning, and that’s what really matters to me. For those who aren’t using a monitor, the Mirror calculates the calories burned using an algorithm that looks at your weight, age, and max heart rate—all of which you input into your fitness profile.

I burned 934 calories in a week of my post-Thanksgiving, pre-Christmas Mirror workouts, which was a pleasant surprise because the workout felt easy at the time. However, by the end of my boxing lesson with Gerren, I was hurting. My arms were sore for a couple of days, and that’s exactly what I’d expect from a class.

Overall, the exercise experience is positive, and the interactive touches, as well as the ability to see the instructor and myself on the same surface, are useful enough that it doesn’t just feel like I could replace this contraption with an IKEA mirror and an on-demand app streaming to my television. I’m telling you, the Mirror is pretty freaking cool—but that doesn’t make it perfect.

You’d imagine that the device’s camera would allow the trainers to see you so they can offer specific advice on your form, but that option won’t be available until Mirror launches its one-on-one training, starting at $US40 ($56) a session, sometime this year. Right now, the camera and mic serve as, uh, decor? A cap is included with the product to cover the camera for those who are paranoid like me. But there’s no knowing what the mic catches.

Honestly, it creeps me out, but I’m also the type who covers my laptop webcam with tape. These days, it’s almost the expectation that we’re all going to possess a bunch of home devices with microphones that might accidentally switch on or be hacked to spy on us, but it’s worth it to be wary whenever you’re introducing a new one. I can’t shake a feeling of paranoia.

For her part, Putnam was clear that privacy is a priority, but beyond the camera cover and three-factor security, which requires proximity, the password, and pin to turn on the camera, she didn’t elaborate on how else the company will protect user data.

Consider that Mirror’s monthly subscription costs less than my monthly $US50 ($70) ClassPass membership. A year’s worth of classes will cost you $US468 ($657) on the Mirror, and that’s a lot cheaper than luxe gyms like Equinox. Even if it costs a little more than your routine including the hardware outlay (you’ll need to do your own maths), I could seriously get used to getting a high-quality workout at home.

The one thing that frequently interfered with my workouts was the device’s incessant buffering. The Mirror requires a wifi speed of 10 megabits per second, and that can be a problem if you have shitty wifi (like I do). My workouts would break up during live and even on-demand classes. Having your class spontaneously drop out is a little disorienting, but they bounced back pretty quickly. The company is currently working on incorporating streaming optimizations that are used by companies like Netflix to help satisfy those with whack wifi. It’s also planning to offer users the option to download workouts directly to Mirror to skip the buffering altogether.

The Mirror is wonderful and delivers on a lot of what the company promises from the outset: high-quality exercise classes conveniently streaming on-demand to slick hardware in your house. And it even offers elements of interactivity that make it more fun and useful. But for something so pricey, it lacks the polish you would expect, and the fact that it hasn’t enabled some of the one-on-one interactivity you get from a real studio class feels like a real miss, especially when you consider that the company is asking you to install yet another camera and microphone in your house with no tangible benefits.

Mirror will undeniably deliver a solid workout, and I’ve no doubt the platform will improve with refinements in the future. But for now, the big brother workout I was expecting is still just that—the future.