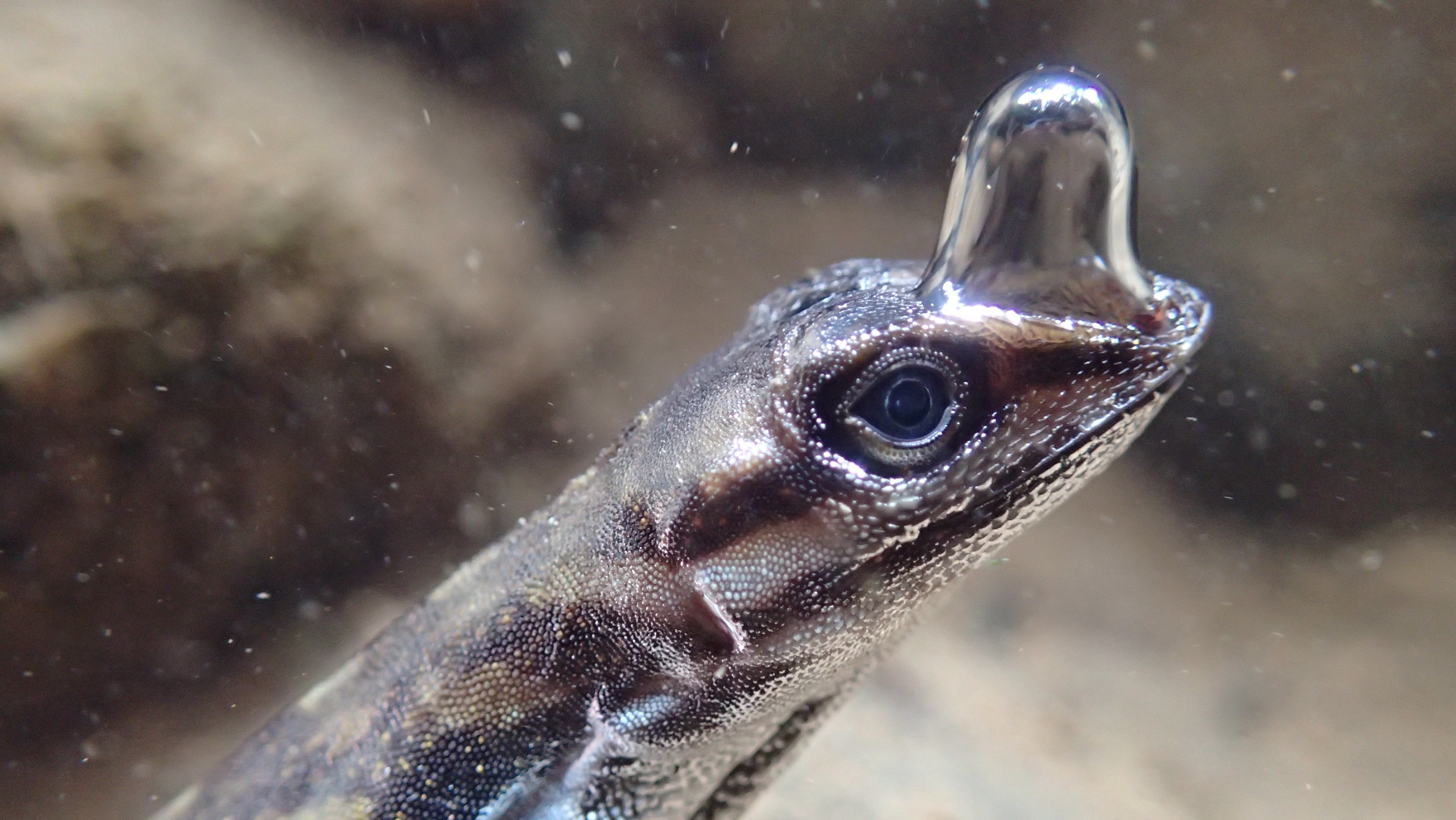 Unprecedented footage from Costa Rica shows tiny tropical lizards “breathing” from an air sac suspended atop their snouts — an apparent scuba tank that helps them stay submerged for extended periods.

This footage comes courtesy of Lindsey Swierk, an ecologist from Binghamton University in New York. While observing water anoles in southern Costa Rica back in 2015, she was impressed by the length of time these tropical lizards were able to stay underwater. When disturbed or frightened, water anoles leap into nearby streams, waiting it out in hopes the prospective predator will go away. In one extraordinary case, Swierk’s team timed a dive lasting for 16 minutes.

“I remember it clearly because that lizard was going to be the last one my team was processing that day,” she told Gizmodo. “Three of us were approaching the lizard to capture it, and it dove into a relatively shallow area in the stream surrounded by rocks… In the end, we disturbed the lizard at the 16 minute mark — something that of course I regret now, wondering how long it would have naturally remained submerged otherwise.”

Impressed, and also very confused, by the length of the dive, she returned a couple of years later to take a closer look — but this time she came equipped with an underwater camera. Swierk was starting to suspect that the water anole was “a tiny scuba diver,” as she wrote in her blog. As the new video evidence shows, these lizards appear to have evolved a “scuba-tank method of sorts to ‘breathe’ underwater.” The new footage is the now the first to capture this process in action.

As the lizards lie motionless underwater, bubbles can periodically be seen appearing above their snouts. The bubbles quickly expand in size, and then shrink. It may very well be a form of underwater respiration, in which oxygen is pulled from the recycled air bubble on the lizard’s head, though further research will be required to validate these visual observations.

“We really don’t know too much about this phenomenon yet, which makes it so interesting,” Swierk told Gizmodo. “I think it’s possible that some air pockets are being trapped around the anole’s head and throat, and that the inhalation and exhalation of the air bubble allow for some ‘trading’ of fresh air among these air pockets. Or perhaps it has something to do with using the bubble to get rid of carbon dioxide.”

Looking ahead, Swierk would like to examine how the lizards’ head shape might help retain large bubbles of air, and how it potentially enables bubbles to stick to the surface of the anole’s body. She’d also like to study the oxygen in the bubble during an extended dive.

“My hope is to examine this phenomenon in an ecological and evolutionary context, comparing these traits and others related to underwater breathing between semi-aquatic anoles and (most other) anole species that typically don’t rely on water as a refuge,” she added. “These projects are all in their infancy, and I’m excited to begin talking with collaborators.

A paper will be published describing Swierk’s observations in the forthcoming March issue of Herpetological Review.