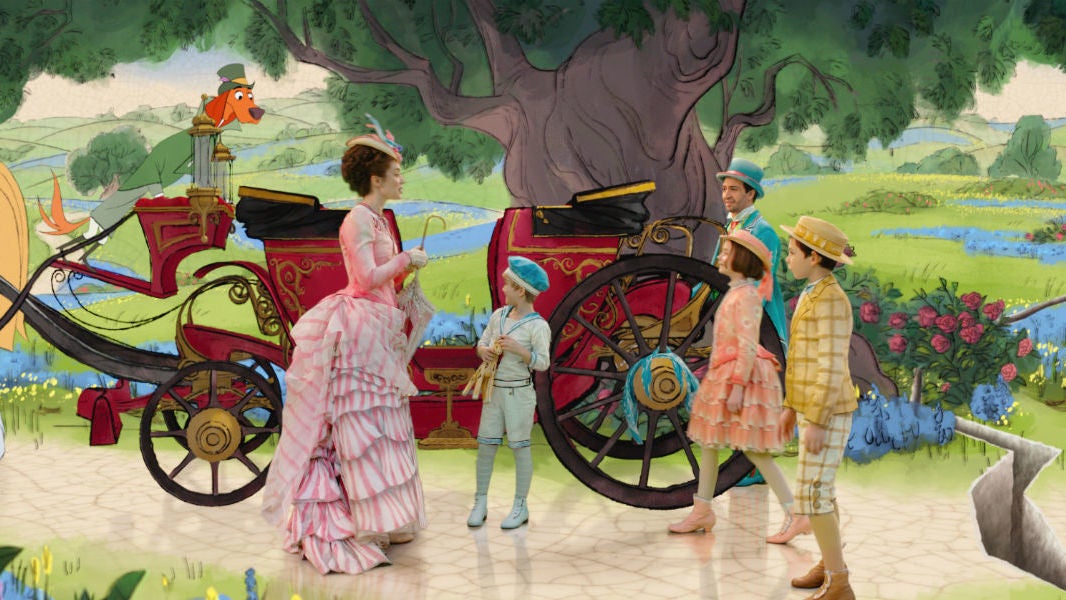 Can you even imagine sitting down and deciding to make a new Mary Poppins movie? It’s almost unfathomable. The original film is such a classic, is so influential, and it’s only become more revered over the decades. To revisit that world and characters, so many tough decisions would have to be made. And those would have to be the right decisions or you’ll forever be known as the person who ruined Mary Poppins.

That and more was the task ahead of Oscar-nominated director Rob Marshall when he decided to make Mary Poppins Returns.

A sequel to Mary Poppins had to be a movie that stayed true to the original film but also moved the story forward. Music should’ve play a big part, but it couldn’t be the same music from the original film. Or could it? How do you compare to five Oscar wins, and eight nominations beyond that? Who the hell could even play Mary Poppins?

Before dealing with any of that, Marshall just wanted to answer one question: Why make this movie at all?

“The major reason to make it is because I feel in our world there is a lack of joy and wonder,” Marshall told io9. “The film is about a family who’s lost a child-like sensibility and wonder. They’re also dealing with the Depression, struggling to make ends meet, and the children have grown up too quickly.

And I just felt like, for me, that all reflects something I feel in today’s world. It’s such a dark time. And a fragile time. What’s lacking is a sense of wonder.” 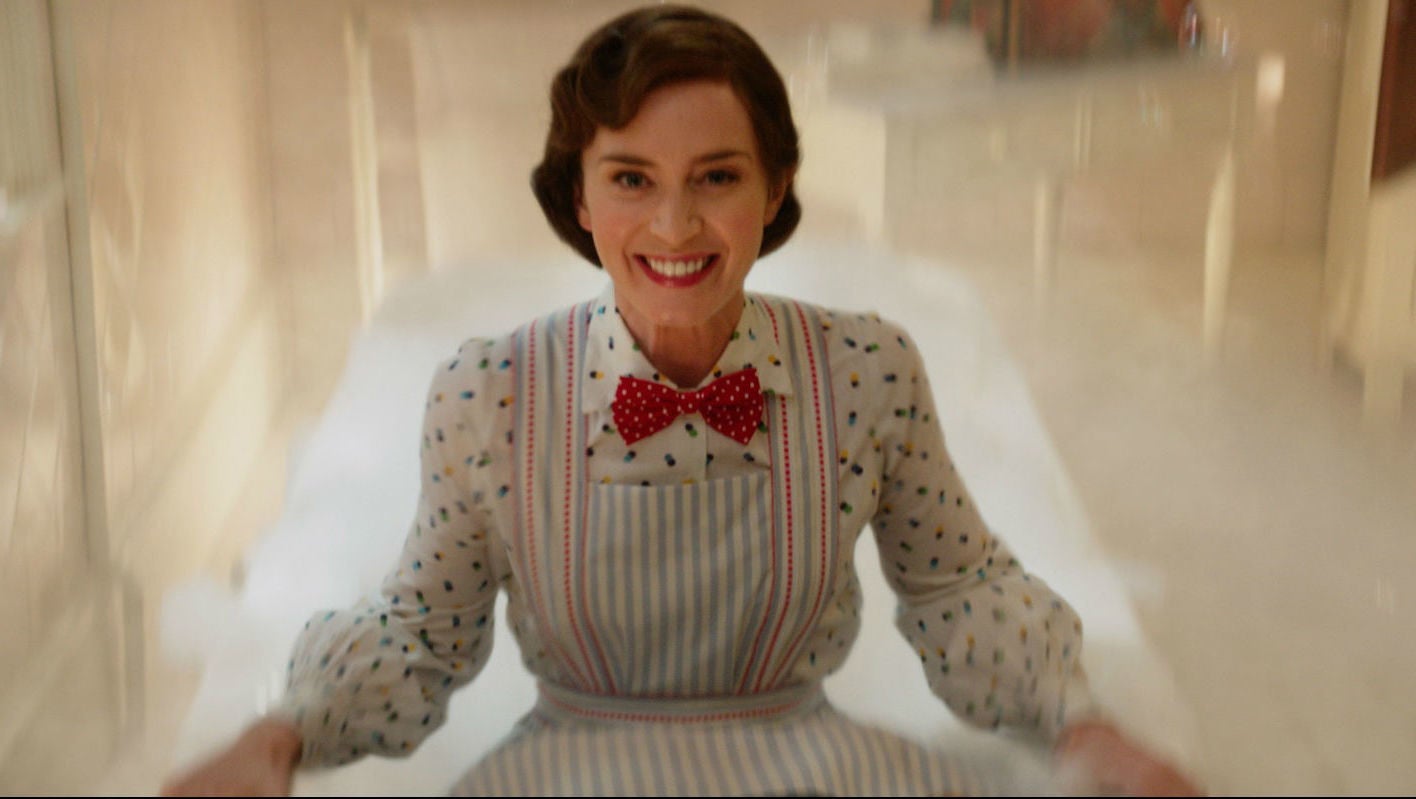 Emily Blunt was the only person who could play Mary, according to Rob Marshall. (Photo: Disney)

So, who better than Mary Poppins, whose whole job is to provide a sense of wonder, than to do that for the world? However, Marshall didn’t even know if a Poppins sequel was possible because of how famously protective of the rights the estate of the character’s creator, PL Travers, is (In fact, Disney made a movie about it).

In the end, though, permission was granted, and Marshall moved along.

The biggest task at the start was casting the lead and, for Marshall, there was only one name. “Only Emily Blunt,” Marshall said. “I don’t know anybody else could have done what she does.” With that settled, then he could move on to the real work.

One of the most difficult tasks for Mary Poppins Returns was coming up with the music, which is such a crucial component in the first film. Those songs, like “Let’s Go Fly a Kite” and “Supercalifragilisticexpialidocious” are all-time classics.

Marshall, who has directed numerous musicals including the Best Picture winner Chicago, knew the music had to feel similarly classic, but he didn’t want to use the same songs. He wanted a completely original score. Enter Marc Shaiman and Scott Wittman, who were tasked with writing the film’s music. And they wrote a lot of music.

“We tried so many different songs,” Marshall said. “We had to find the right ones because the bar was so high. So [Shaiman and Wittman] wrote a lot of material until we found ones that we really felt captured exactly what we’re trying to do.”

Marshall said for some sequence in the film, Shaiman and Wittman actually wrote four or five different songs/versions of those songs until they figured out which one really fit in the film. 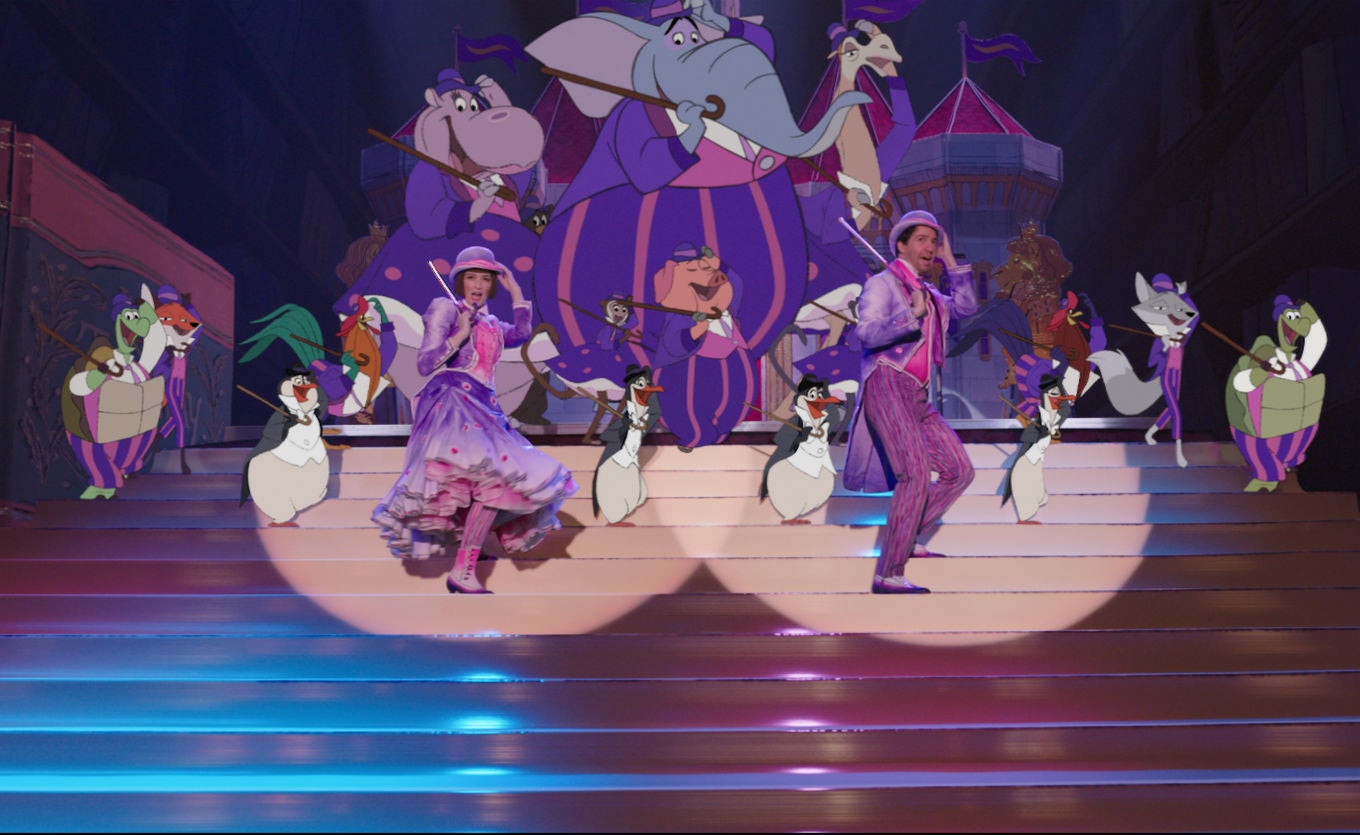 The animated sequence in the film is jaw-dropping. (Photo: Disney)

To make things even harder, a few of those songs take place in a jaw-dropping sequence that blends live-action, computer animation, and hand-drawn animation as an homage to the hand-drawn animated scene in the original film. The sequence took 16 months to complete.

During that time, Marshall and his team had to coordinate animation, live-action, new music, full dance choreography and more. For example, as Jack and Mary dance and sing around, there are all sorts of animated animals dancing alongside them. “All of that we choreographed on real people and used them as a reference for the animators,” Marshall said. “But to coordinate that was so complicated because animation is used to saying ‘Well we can do this in animation’ and live action is like ‘Well when we do this’ and so you have to kind of become a marriage between the two.”

“We did it in a very methodical, meticulous way,” Marshall continued. “A lot of storyboards, a lot of videotaping our rehearsals, so they would understand what we’re doing.” Plus, Marshall made sure all of the departments were working under the same roof. “I always feel like if everyone is in the room working on it we’re all doing the same thing,” he said. “So I just had everybody in the room as we worked.”

That scene is one of the biggest winks back to the original film but Marshall was very careful about that balance.

“I felt like we were walking a fine line because you could easily have overdone it,” he said. “I was very meticulous about making sure that if we were going to use a song as underscore, we use it very specifically. I tried to push most of them towards the end of the film. I felt you can’t over abuse it.”

Marshall was so worried about this, he basically wouldn’t trust anyone else to do it. 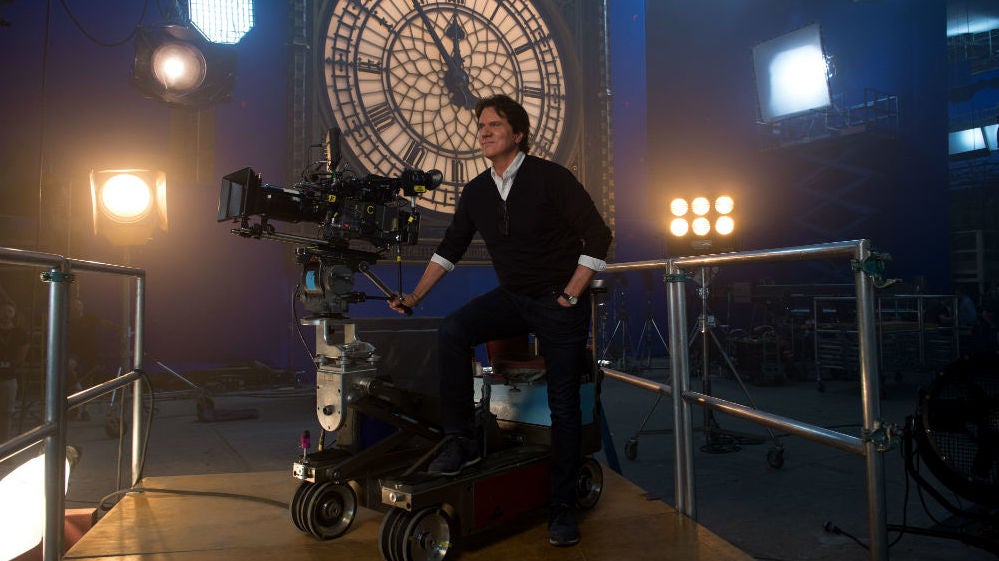 “One of the reasons I wanted to direct the film is because I wanted to protect the original film,” he said. “I want to feel like we’ve taken great care and thoughtfulness and showed a great deal of love for the first film. But, at the same time, I wanted a completely new story, complete original score, and that was the balancing act the whole time.”

On the plus side, so much preparation went into the music, the big sequences and everything else, by the time Marshall had finished filming, he used almost every single thing they shot.

“There is only one little tiny tag of a scene that we that we eliminated,” he said. “There was very little on the cutting room floor because we needed to keep our budget together so all that cutting we did early on. But it was great to be able to go through the film and be very specific about where we wanted homage, where we didn’t, and not abuse it too much.”

All of that hard work resulted in a film that feels both modern and fresh, both timeless and classic. A film that Marshall hopes does for others what the original did for him.

“This original film for me, brought such a sense of wonder and magic and joy to my life that I thought I wanted to reignite that again,” he said. “It was a completely daunting task to take on, but I was excited because of what it could bring to the world.”