huaweihuawei matebook x prolaptops
At Gizmodo, we independently select and write about stuff we love and think you'll like too. We have affiliate and advertising partnerships, which means we may collect a share of sales or other compensation from the links on this page. BTW - prices are accurate and items in stock at the time of posting.

Here at Gizmodo we’ve been yelling about the lack of Matebook X Pro in Australia for awhile now. Considered one of the best laptops of 2018, we desperately wanted to try one. I even harassed Huawei about it at IFA a few months back.

Well, surprise! Huawei just casually dropped it in Australia like its NBD. Here’s how you can get one. 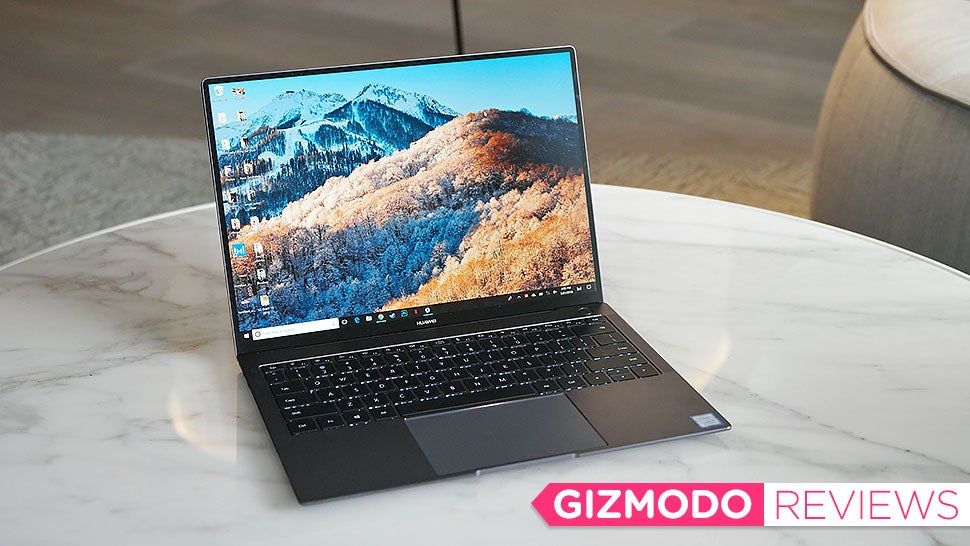 This Laptop Is The MacBook Pro People Wish Apple Would Make

So there I am, 10,000km from home in a foreign country (whose language I don't speak) covering a trade show by myself, and I realise the power brick on my XPS 13 is busted. This is a disaster. My laptop is my lifeblood. I need it to write stories, edit photos, and collaborate with the team back home. Without it, I'm truly screwed. And what's even worse is that my work XPS is the last generation without support for charging over USB-C, and because Spain doesn't give a shit about Dell, there was no replacing it (trust me I tried).

There may not have been a press release, but tech journalists were treated to the Matebook X news at the Huawei Mate 20 Pro launch a few weeks back, but nothing has really been said since then.

There are a few reasons why we’re so excited for the Matebook X Pro. Not only is the slim-bezeled design gorgeous and it has the specs to match – the i7 version has a dedicated GPU and is well under $3,000.

For comparison, a Surface Laptop 2 with the the same specs as the i7 Matebook X Pro is $3,300 and doesn’t have a GPU. The same goes for the high-end Dell XPS 13, which now comes in at around $2,900 – though it is a bit ligther and the Huawei doesn’t have 4K in its touchscreen.

Although that does mean that the battery life will probably be better. In our tests of both machines the Matebook X Pro came in at 11 hours and 7 minutes, while the XPS 13 only reached 9 hours and 28 minutes.

Here are the key specs for the i7:

The quiet release and immediate sale pricing is interesting. It may be because it’s been out globally since early 2018 and it’s Huawei’s first laptop in the Australian market. Big discounts on rigs which specs that smoke a lot of the competition is certainly a good incentive for people to buy.

Is it also because we’ll be seeing the next gen Matebook X in just a few months at CES? We won’t know until we’re there, but it’s an exciting prospect.

Why Australia Misses Out On Huawei Products

In addition to teasing its upcoming Mate 20 phone at IFA last week, Huawei also announced its first ever smart speaker -- The Huawei AI Cube.</p> <p>But much like the reportedly amazing Matebook X Pro, the Cube isn't coming to Australia. And neither are the new P20 colours.</p> <p>So I decided to ask Huawei why we always miss out.

In the laptop world, Dell's XPS 13 gets a lot of credit for having a great design, excellent battery life and that nifty Infinity Edge display that started the trend of slimmer bezels on laptops. But what most people don't know is that the laptop with the thinnest bezels in the world isn't a Dell, it's now a Huawei.