How Much Human Skin Does A Person Ingest Over The Course Of Their Lifetime? 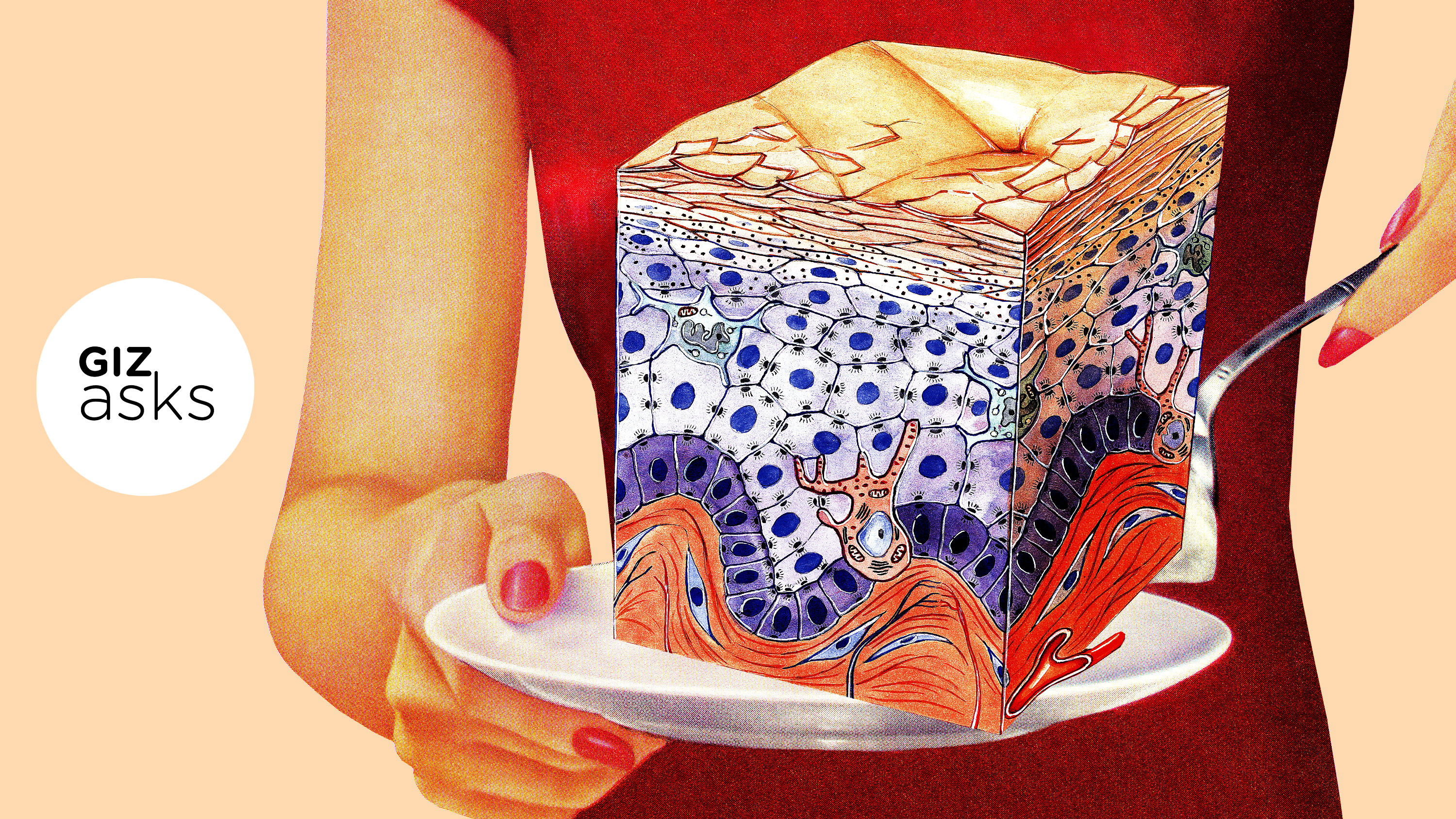 The average American eats over 900kg of food a year. This breaks down to roughly 285kg of milk, cheese and ice cream, 84kg of meat, and an increasingly high dosage of anti-depressants. But where does human flesh fit in? Humans shed something like 500 million skin cells a day. The fact is that these literal millions of shed cells are making it right into our mouths, often—especially—when we think we’re only eating a couple of eggs or whatever.

What’s the final tally, eating-dead-skin-cells-wise? Laying on our deathbeds, will be ever be able to know the precise poundage of flesh we’ve eaten in a lifetime? For this week’s Giz Asks, we turned to a number of reputable dermatologists for some answers. It is maybe not so surprising that, as we learned, no serious scholar has devoted any research to getting a proper estimate on this one. But our experts gamely arranged their own equations.

To my knowledge, nobody has actually tried to measure this, but I guess it depends on whether you bite your nails or not. If you do, I’d expect it to be a lot over the course of an entire lifetime—probably up to at least few hundred grams, if not more. But if you don’t, then probably not more than a few grams.

You also have to take into account that the inside of your mouth, down to the opening of the stomach, is covered in what’s called stratified epithelia—similar to but not the same as the skin—and so that will add quite substantially to this amount over one’s entire lifetime.

Are we ingesting other people’s skin cells, too?

As for other people’s skin cells—That’s probably a bit hard to classify. Fomites [i.e., nonliving objects capable of carrying infection] are all over the place, and these carry dead skin cells, as well as breakdown products of skin—so yes, I think you’d be inhaling and ingesting other people skin to some extent. But probably much more from your own household members than from anybody else.

These cells are pretty harmless—in some cases it has been argued that they could actually be beneficial, and help protect against allergic reactions and possibly autoimmunity. When it comes to chemicals and compounds bound to the skin, ingesting skin cells could theoretically be harmful, but I’m not aware of any such reports.

It is estimated that we have about 50,000 nucleated skin cells per square millimetre. An average person is about 1.7 square meters in body surface area (1.7 million square millimetres), which calculates to about 85 billion keratinocytes (i.e., skin cells) on our body.

Keratinocytes go through 4 weeks of maturation before they shed, so on any one day, you are probably losing about 3 billion skin cells, based on these numbers. Of course, you aren’t ingesting all of these (what would dust mites live on otherwise?), but I think it would be reasonable to assume that you maybe ingest about 1% of them (we measure body surface area roughly based on the size of your hand—1 palm = 1% body surface area).

Does 1% of our skin come in contact with our mouths every day? Sure! We eat, we wipe our mouths, some people lick their lips; there is lots of opportunity for us to manually debride our skin with our mouths or tongues, or just have the cells be close enough to our oropharynx. So my guess would be about 30,000,000 skin cells per day get ingested. (Of course this is all just speculation, using estimated numbers.)

Others have tried to answer this question by estimating how many total cells are in the human body and how much of our body weight is skin, and the numbers are different when you use this as your method of calculating.

Do we ingest other people’s skin cells?

We probably ingest other people’s skin cells, too. Probably. When you kiss someone you likely ingest some; the dust all over our houses has some dead skin cells as a component. It’s everywhere, we just don’t realise it (this is likely akin to the particles of faecal matter and bacteria that have been demonstrated to be sprayed into the air after one flushes the toilet, often landing on our toothbrushes).

The fact that these shed skin cells (which at this point have lost their nuclei) are probably ubiquitous, and no reports of disease transmission have been reported in association with them, makes me think that it is unlikely that dead skin shed from the body and present in the environment is going to be pathogenic. That being said, we do know that infectious agents live on or within the skin (staphylococcal bacteria, herpes viruses, etc.), so caveat emptor!

Professor, Cancer Genomics and of Genetics, Stanford University, with a board certification in dermatology

The upper estimate of skin shed per day is 1.5 pounds a year, and the average life span is 70 years—so, first multiply those two numbers

Assuming we ingest 1% of these cells—especially when eating or preparing food—and assuming we spend 3 hours per day preparing and/or eating food, the number we end up with is 0.13 pounds consumed over one’s lifetime—1.5 pb/yr x 70 yr x 1% x 3/24. You’d have to really make an effort to ingest significant amounts of human flesh.

The ingested shed skin is not harmful. A very important feature of the shed dead skin cells is that they are “squames.” The skin cells undergo a very special form of programmed cell death to turn the “corpses” into brick-like structures that build the wall and constitute the body’s outer defence. The DNA in the skin cells are all chopped up and destroyed before they turn into squames. So we are not eating our “essence” from shed skin cells—either from ourselves or other individuals.