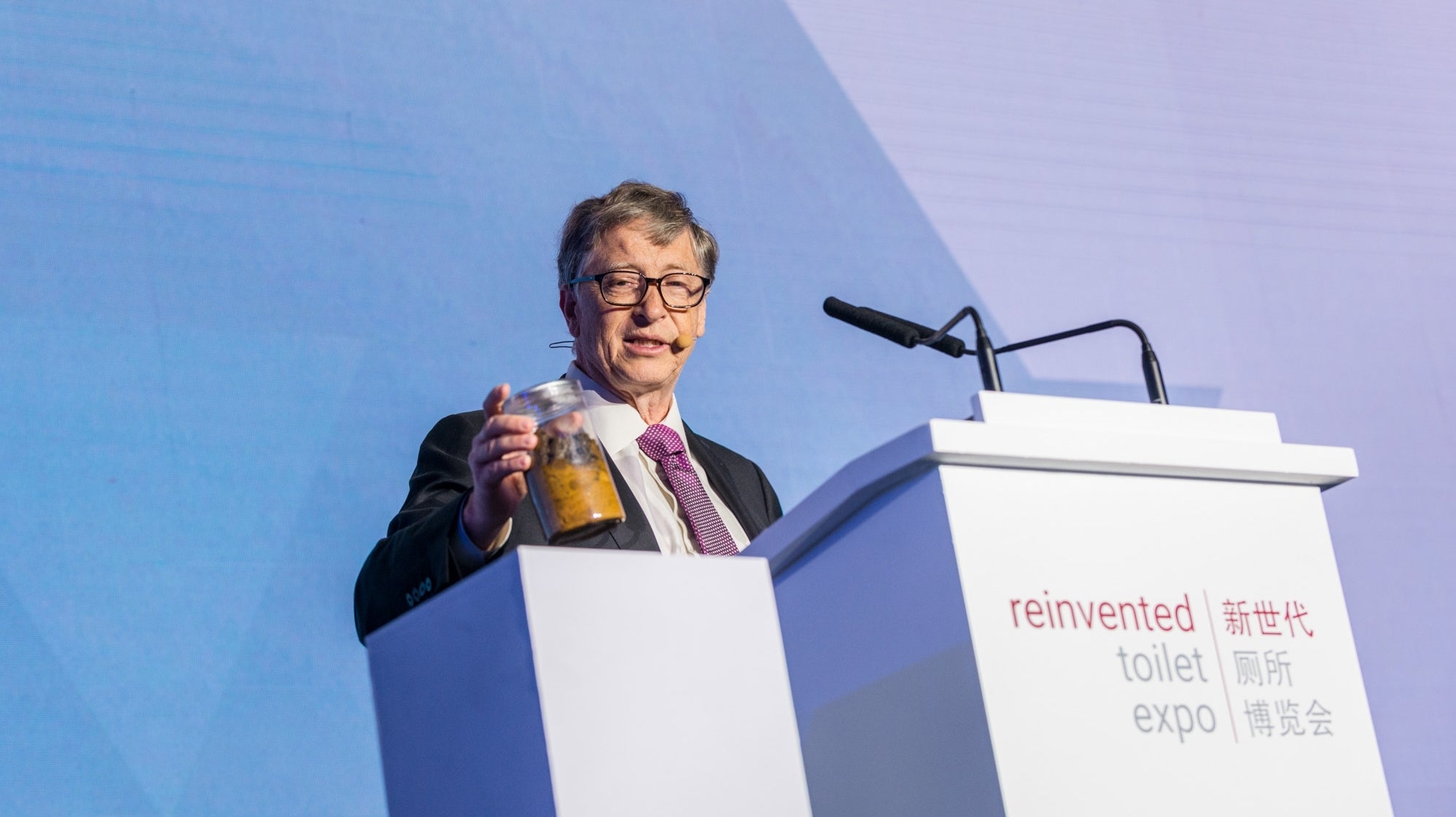 Have you ever wondered which tech billionaire thinks the most about pooping? Well, ponder no further. It’s Bill Gates.

On Tuesday, the Microsoft co-founder flexed his flair for theatrics by brandishing a jar of human faeces in front of a stunned Beijing crowd. The idea was to kick off a three-day Reinvented Toilet Expo to inspire the crappers of the future.

But, you ask, what about those super high-tech Japanese toilets? You know, the ones that warm your seat, shoot water up your butt, and come with fart-masking courtesy noises. Or even China’s wifi-enabled public toilets replete with ATMs, chargers, and personal TVs. Well, Gates has a different vision for what smart toilets should look like: He thinks they should be waterless.

Why? Germs. Water carries lots and lots of viruses, parasites, and germs. During his speech, Gates said the poop jar on stage could be home to as many as “200 trillion rotavirus, 20 billion shigella bacteria, and 100,000 parasitic worm eggs.” But don’t take it from me. Let the man himself give you a masterclass on toilets. Coinciding with the event, Gates tweeted a detailed video all about poop and the need for clean sanitation.

There are few things I love talking about more than toilets. pic.twitter.com/rQdY3ZiIpC

Since 2011, Bill and Melinda Gates have donated $277 million toward developing water-less toilets through the Gates Foundation. The idea is to build a toilet that can operate without water, sewers, or electrical lines, removes germs from human waste, and costs less than five cents a day to use. He makes a compelling case.

According to the World Health Organisation, at least 2 billion people drink water from poop-contaminated sources, and they definitely can’t afford to poop in luxury. Those fancy Asian toilets? Installing one in the U.S. can set you back anywhere between $831 – $2,355.

“I have to say, a decade ago I never imagined that I’d know so much about poop,” Gates said to the Reinvented Toilet Expo crowd. But the jig is up, Bill. The truth is, Microsoft’s founder is no stranger to public shit-related stunts. In 2015, he drank distilled H2O made from human feces to demonstrate clean water technology for the developing world. Glad Gates has full confidence in technology he’s bankrolled, but…. blerch. You do you, Bill. You do you.