Last year brought a monumental observation of the cosmos: the light and simultaneous gravitational waves from a pair of colliding neutron stars over 130 million light-years from Earth. But mysteries about this event remained—like why the radiation it emitted as x-rays and radio waves gradually brightened for half a year afterward.

That mystery might now have been solved by matter appearing to move faster than light.

Scientists observed the source of the gravitational waves on several occasions using an array of 10 telescopes around the world, called the High Sensitivity Array (HSA). The observations implied that these neutron star mergers produce collimated jets of particles that emerge from a wider cocoon of matter. They also further link these collisions to mysterious flashes of gamma-rays called “short gamma-ray bursts.”

Last August, observatories around the world observed spacetime ripples called gravitational waves and a bright flash of radiation from the same place. This was a sure-fire signature of colliding bodies called neutron stars, objects slightly more massive than the Sun but smaller than a typical city. It was a transformative moment in astronomy.

But the collision’s gamma rays were weaker than expected, and those who continued to watch the location of “GW170817" noticed that the radio waves and x-rays continued to brighten for months after the big event. Scientists thought that maybe, rather than a thin jet of particles moving at nearly light speed and pointed some direction away from the Earth, the jet was actually choked by the debris and instead became a wide cocoon of slower-moving matter, producing the radio and x-ray brightening as well as the dearth of gamma rays. You can read all about this mystery here: 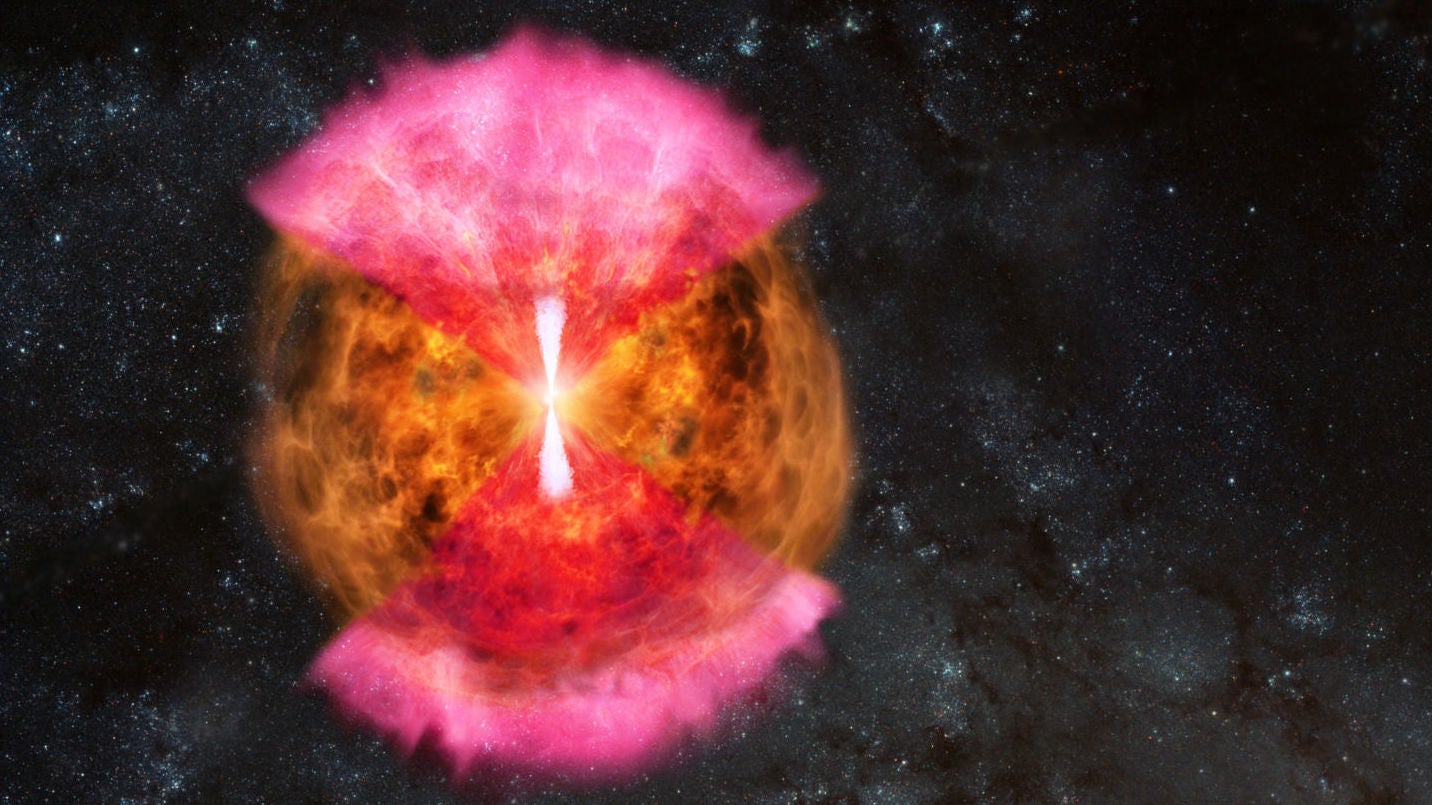 So scientists observed the crap out of GW170817 using the facilities that form the HSA: the Very Large Array, the Green Bank Telescope, and the dishes of the Very Long Baseline Array. They watched for four periods between September 2017 and April 2018, each period consisting of two to four observations for up to 10 days. The observation relied on the principle of very long-baseline interferometry (VLBI), where observers combine data from distant radio telescopes.

The observations revealed the radio emissions appearing to move four times faster than the speed of light, according to the paper published in Nature. That’s not an error—it’s an illusion seen when jets of particles moving at nearly light speed are travelling indirectly toward Earth. Think of it this way: the jet takes some time to travel a distance. But since the jet, which is moving closer to Earth but not pointed at us directly, is travelling slightly slower than the radiation it emits, the light from the back of the jet will reach Earth slightly before the light from the front of the jet. Thus, the jet appears to move perpendicularly faster than light.

The new analysis suggested the existence of a thin jet angled 20 degrees away from the Earth, and travelling at 97 per cent the speed of light, according to a National Radio Astronomy Observatory press release. It also supported that the source emitting the jet was “compact,” likely a black hole.

This helps answer the mystery of the brightening radio waves and x-rays—the source (likely a black hole) continued to emit the jet of particles in the six months after the neutron star collision. “The VLBI data shows that the jet did not get choked but that it was able to successfully break out of the cocoon,” Mansi Kasliwal, an assistant professor of astronomy at Caltech who was not involved with the study, told Gizmodo. Radio waves would have first come from the cocoon, then the jet two months later.

It also provides evidence linking neutron stars with a phenomenon called short gamma-ray bursts—thin jets emerging from debris like this is a “prerequisite” for these bursts, according to the paper.

The paper doesn’t fully answer every question, Kasliwal explained. The jet still differed substantially from what physicists expected. That, of course, means that there are more observations to be taken and more work to be done.