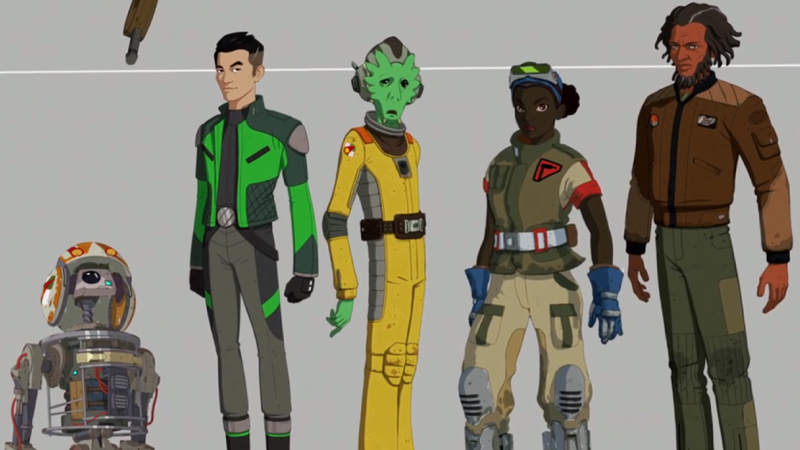 From what we’ve seen so far, the next Star Wars animated series is steering away from the Force-fuelled clashes that drove Clone Wars and Rebels, instead fitting itself into a post-Return of the Jedi world of spies, pilots and ship crews. A new behind-the-scenes reel introduces us to a few of the stars of this intriguing setting.

Debuted by Entertainment Weekly today, the new reel introduces us to the primary cast of Resistance first glimpsed in the recent trailer: Team Fireball, a group of mechanics and ship racers operating aboard the galactic waystation known as the Colossus.

The main star of the show, Kazuda Xiono (voiced by Christopher Sean), is a Resistance operative tasked by Leia and Poe with being embedded in Fireball so he can use the Colossus as a base of operations for his real mission: To spy on the First Order. But in the meantime, Kaz will have to make do, helping the team scrub up ships and taking part in high-flying races to earn his keep.

Aside from glimpses of familiar faces such as Leia, Poe, BB-8 and even the First Order (who include a rather intriguing-looking crimson-clad soldier among their ranks), we get to learn a little more about Team Fireball itself: Former Rebel pilot turned humble mechanic Jarek Yeager (Scott Lawrence), the kickarse Tam Ryvora (Suzie McGrath), and a quirky Nikto named Neeku (Josh Brener).

Although Kaz will have BB-8 in tow for some of his missions, Resistance adds another adorable-looking droid in the form of Bucket, a beat-up Astromech unit who even has his own little X-Wing pilot helmet. D’aaw.

Despite the skulduggery of Kaz’s real mission, this all looks noticeably more lighthearted than the paths both Clone Wars and Rebels went down, which will be interesting to see play out. As Star Wars animation continues to expand and flourish at Lucasfilm, getting a variety of tones and styles in these series is crucial, to avoid a Star Wars sameness that’s threatened to creep up in other areas of the galaxy far, far away.

Resistance definitely looks different, and its heroes reflect an intriguing and relatively underexplored corner of Star Wars that we can’t wait to see unfold.