Who's better than Toothless? NO ONE. (Gif: DreamWorks)

Roar Into the Weekend With a Dragon-Themed Gif Party

With ColdQuanta's new system, you can manipulate quantum matter inside a precisely engineered glass cell, like this one, over the internet. (Image: ColdQuanta)

Here, Play With This Quantum Puppet

Our Latest Look at The Suicide Squad Is a Veritable ‘Tag...

Political fights online are always hazardous. But a recent Facebook dispute between two strangers in Florida led to a bullet in the butt.

Brian Sebring, 44, faces felony charges after he decided to take an argument offline.

“I went off the deep end,” he told the Tampa Bay Times. “I wasn’t thinking right. You know, after this I’m going to go see a therapist or something, man, because that’s some scary shit, that I could lose my temper like that and do something so stupid.”

The Times reports that the feud likely began when Sebring commented on a friend’s post about Donald Trump, which has since been removed.

Sebring told the Times he responded to a man named Alex Stephens, who posted that he wanted to express his opinion despite having lost the right to vote after being convicted on felony charges. Sebring then reportedly responded saying someone who wants to express an opinion shouldn’t do crimes.

According to Sebring, Stephens then private messaged him and sent him threatening messages, including threats against his family. Stephens, 46, spent time in state prison for charges including drug possession and robbery.

Sebring also has a criminal history. He was arrested and plead guilty to misdemeanour battery charges. He attended anger management class and kept his voting rights. He is a registered Democrat.

The Times reviewed screen grabs of Sebring’s private-message conversation with Stephens in which Sebring said: “Dude I’m going to empty a full 5.56 magazine into your head,” and “You really want me to come to your (house).”

Sebring said he left work early on Monday, drove to the home he shares with his mother, wife and sons, and grabbed an AR-15 and his wife’s handgun. Then he drove to Stephens’ house. “I just snapped and let primal rage take over,” Sebring told the Times.

Stephens told Gizmodo that Sebring threatened to kill him and that Stephens never threatened Sebring’s family. “I don’t roll like that,” Stephens wrote in a Facebook message to Gizmodo. “Yeah I said come to my house,,, To fight!!! Not to have a gun battle,, I’m a hand on hand type of guy,, not Glocks and AR-15.”

According to Sebring, Stephens came outside his house and charged at him. “It looked like he was holding a steak knife in his hand and I got scared,” Sebring told the Times. “When I shot him, he dropped it and ran back in the house.”

Stephens was shot in the buttocks and thigh.

Police spokesman Steve Hegarty told the Times neither men mentioned a knife in their initial reports. Stephens told Gizmodo he did not charge Sebring with a knife. “No not at all,” he said.

Stephens also provided Gizmodo with a screengrab of a Facebook conversation in which Sebring appears to boast about shooting him. A Facebook user who took part in the conversation, whose identity we agreed not to publish, confirmed the authenticity of Sebring’s remarks. Sebring did not yet respond to our request to comment. 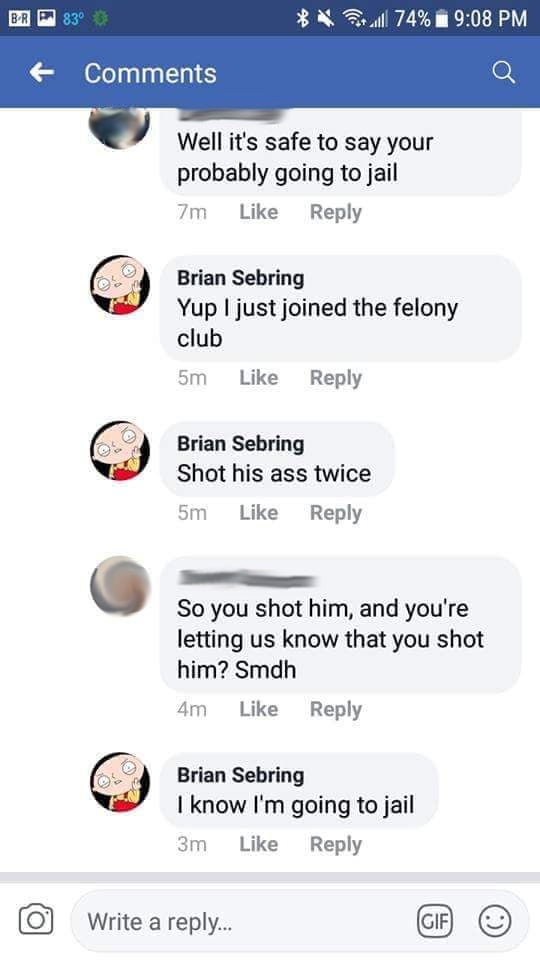 Sebring did not yet respond to our request to comment.

In his interview with the Times, Sebring was more remorseful. “I ruined my life over this,” Sebring told the outlet. “Now my mother is too afraid to leave the house, my sons are afraid to walk to school or church, all because of some keyboard gangsters.”

Sebring now faces felony charges of carrying a concealed weapon and aggravated battery with a deadly weapon. He may soon lose his right to vote.