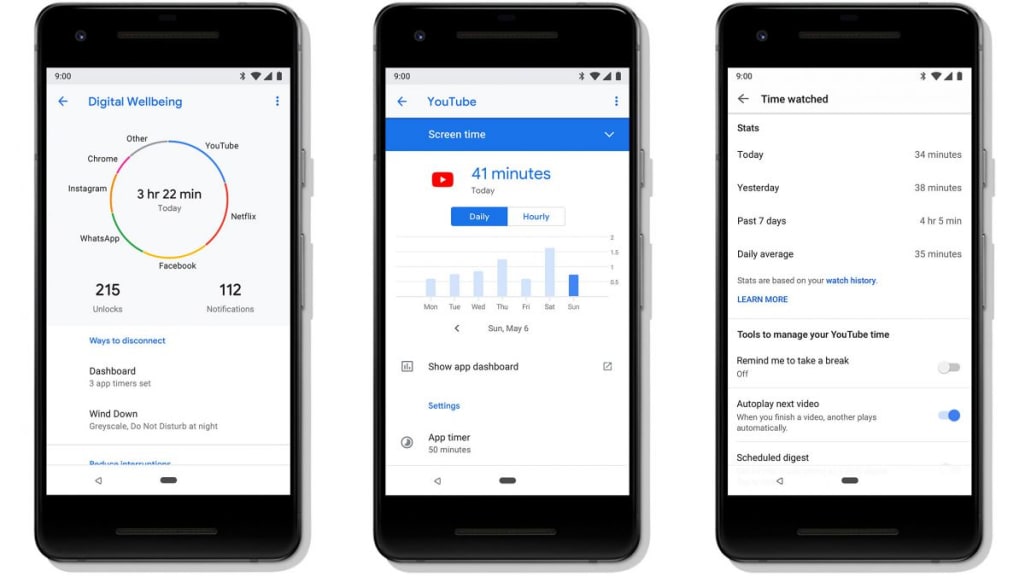 How much daily phone use is too much? It’s a difficult question to answer, made even more difficult by the fact that there are so many different uses for that magic black rectangle in our pockets, and the fact that it’s often tough to be aware of the passage of time when you’re eyeballs deep in conspiracy theory rabbit holes, strangers’ braggy holiday photos, ads for cheap mattresses and other digital jetsam.

Google’s new digital wellbeing software promises to sort the valuable time from the wastes of time, running in the background of your phone to collate data and give you insights. The suite has been a long time coming, first announced at Google I/O back in May, and in the meantime, Apple has both announced and released a similar feature for iPhone.

The pie chart gives you a quick way to see how long you’ve used your phone today.

Digital wellbeing is currently in beta, open to anybody running the new Android P on a Pixel phone. It adds a new menu to your phone’s settings that opens to a screen that shows how much screen time you’ve had today and a pie chart of which apps you’ve used.

Opening the “dashboard” lets you see whole weeks at a time plotted on a bar chart, so you can spot any worrying trends or apps you repeatedly spend too much time in. Unlike some apps with similar goals, digital wellness doesn’t impose any strict or irreversible rules or restrictions, instead aiming to give you the tools to reduce the amount of time you spend idly on your phone for yourself.

After monitoring myself and two others for a full seven days, I have plenty of data on how often we opened our phones, how many notifications we received, how much screen time we each got in total and which apps were most responsible for each. And while in the end, I’ve concluded that none among the three of us have a serious phone addiction problem that needs to be addressed, it’s easy to see how the information would come in handy for those looking to cut back.

Before starting this experiment I was very sure of the fact that phone addiction was not a problem of mine. I spend all day at work staring at a monitor and tooling with gadgets, so during my commute, I’m generally trying to meditate, read a book, listen to music or catch up with podcasts. If I have any downtime at home, I’m continuing to tool with gadgets (I’m so glad there’s no tracking software for that) or playing video games on any device except my phone.

The data supports this, showing I generally used the phone for two hours total per weekday, an hour or less each for Saturday and Sunday. My most used app most days was Chrome, with Facebook (the only app I was remotely worried about), hanging back on the list with 15 or 20 minutes worth of FOMO-induced scrolling per weekday. 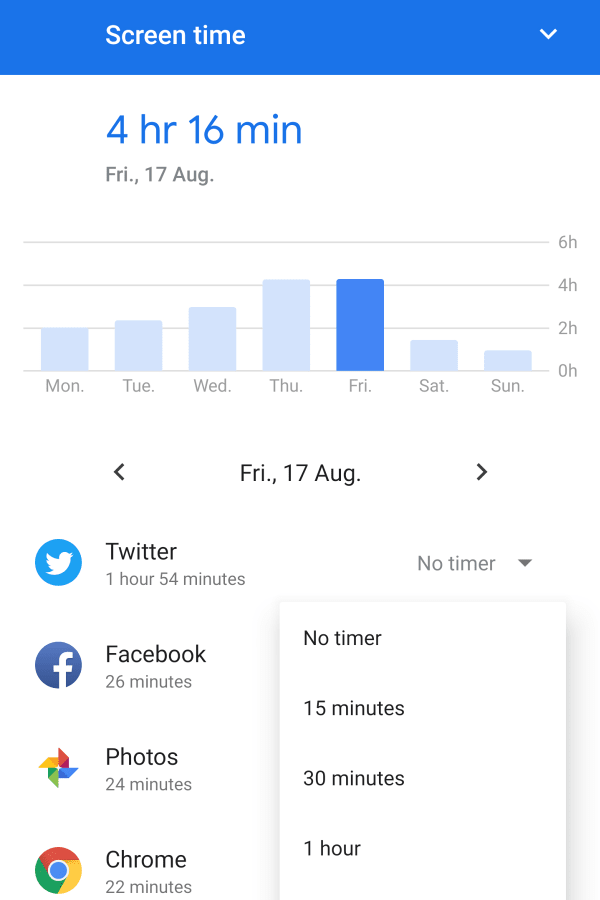 There was a bit of a hiccup, when for reasons too complex to go into here I had an explosion of Twitter activity on Thursday and Friday. Generally, I use the app for between five and 15 minutes a day, mostly for work. I tend to get less than 10 notifications from it. On Friday I got 114 notifications and used it for nearly two hours. Anomalous though this was, it’s cool to see it all documented so plainly by the software here.

If the numbers regularly looked the way they did for Friday last week, I’d probably have to take some sort of action to get my Twitter usage down. For example, I could hit the drop-down box on the dashboard screen and set a Twitter timer for 30 minutes. This would mean the phone would notify me the next time I used it for more than half an hour in a day. The app icon would turn grey on my home screen to show it was off limits, even though I could easily go back to the dashboard to turn the timer off if I really needed my fix.

To be honest, I don’t think I’m the best candidate to test whether this software can curb your digital addiction. I get way more exposure to social media, YouTube and video games on devices that are not my phone, and I even offload text messaging to a PC while I’m at work. Even though I use the handset a lot for podcasts and music, digital wellbeing only counts the time when the phone is unlocked.

Since I knew my numbers would be fudged somewhat, I enlisted the help of my wife Emma and Fairfax graphic designer Stephen Kiprillis, who also tracked their usage for the week.

Emma’s phone gets a lot more use than mine does being unlocked for around three extra hours per day.

She was surprised to find that she opened Facebook around 50 times a day on weekdays, although she only actually used it for around an hour a day total, which she considers “not awful”. She suspects the digital wellness software was influencing her to cut back even before she saw the data.

“Knowing I was tracking my social media usage stopped me from aimlessly looking at memes and things”, she said. “The results were a lot better than I thought they would be.”

On Saturday and Sunday, when I was home from work, Emma and I both used our phones far less.

Stephen saw an opposite effect, with his usage spiking on his self-appointed “lazy day”, Wednesday, with around five hours. But his vice isn’t Facebook.

“I already knew this but I spend way too much time on Reddit. It was my top used app four out of the seven days, and only once was it out of the top two,” he said. With around two hours of Reddit use on Wednesday, he decided to set a half hour daily timer on the app, and while it did curb his Reddit use it didn’t get him off his phone.

“I’d just end up using other apps instead”, he said.

Stephen also surprised everybody, including himself, by using his phone as an actual phone. On one day he used the phone app for more than an hour.

It’s clear from the graph above that Emma had the most daily screen time of the three of us on average, but the raw data here doesn’t exactly tell the full story. As a full-time mum to a very light-napping baby, she spends hours a day quietly lying by his side, often watching TV shows on her phone and chatting with me and her friends via text.

For example, her highest usage was on Friday, with a whopping six hours and fifty minutes of screen time. Yet three-and-a-half hours of that was Netflix, and a further hour was messaging. Emma’s phone is essentially the only device she uses for communication and entertainment, which is far from true when it comes to myself.

Still, when she saw how much time she was spending staring at her phone she decided to turn on the “wind down” feature, which sets your phone to do not disturb and makes the entire screen grey after your nominated bedtime, to discourage you using your phone too late.

It kind of worked.

“One night I was watching Suits and it went past my bedtime”, she said. “I kept watching, but I watched it in greyscale to punish myself for staying up.

“The next night it happened again and I just disabled it because it was annoying”. 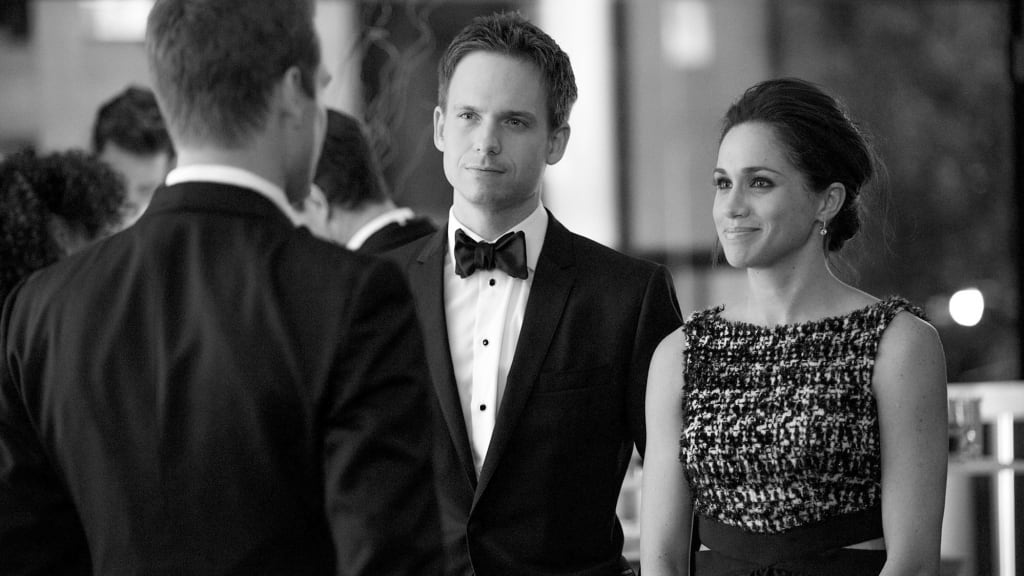 Well, this is slightly less entertaining.

Even if Suits proved more important than a good night’s sleep in this instance, Emma said wind down was a lot more effective than timers that kicked her out of the app.

“Because it just turned grey and it was an inconvenience, it wasn’t stopping me from doing want I wanted. It was just reminding me of the limits I set”, she said.

Emma was also the clear winner in terms of notifications and number of unlocks, which she blames on messaging and “a bad habit of totally opening my phone just to check the time”, respectively.