The removal of the headphone jack from high-end smartphones has created a boost in demand for Bluetooth headphones, as consumers opt to go wireless rather than deal with a bunch of dongles. But despite the plethora of options on the market, running the gamut from cheap $30 pairs to $400 and beyond, quality wireless headphones are few and far between.

Enter Chinese smartphone maker OnePlus; a company traditionally known for producing top tier handsets that significantly undercut more established rivals on price. OnePlus is looking to bring the same value proposition to the wireless headphone market with the $US69 ($92) Bullets Wireless. Keeping up with the OnePlus pedigree by cramming in features not typically found at this price point, these have a sound signature that blows away other Bluetooth earbuds costing more than twice as much, such as Apple’s BeatsX ($200), the neckband-free Apple AirPods ($229) and Google’s Pixel Buds ($250)

The Bullets Wireless look almost identical to the popular BeatsX; from the silicone neckband with the rubberised finish, to the layout of the physical controls, to the earbuds that latch together magnetically when not in use.

However, OnePlus’ implementation is much more functional in that it automatically pauses the music and turns off the headphones when the earbuds are magnetically connected, conserving battery life in the process. As someone who often forgets to turn off their headphones after a workout, this feature alone is a godsend.

Releasing the earbuds from their magnetic hold will automatically turn on and reconnect to the last device you were using. I tested the Bullets Wireless across a range of smartphones including the Galaxy S9+ and the iPhone X, in addition to PC and Mac, and the feature worked seamlessly every time.

When it comes to in-ear headphones, comfort and fit weigh heavily into the equation and this is another area where the Bullets Wireless exceed expectations. OnePlus includes three sets of eartips and three sets of “wings” to help keep the earbuds anchored to your ears. I’ve never been able to find a pair of in-ear headphones that didn’t pop out in the middle of a workout, or at least require the occasional readjustment to keep them in the right position, but not so with the Bullets Wireless. I inserted these earphones once and never had to touch them again regardless of whether I was lifting weights or going for a run. Leaving them on for extended periods isn’t uncomfortable either which isn’t something I can say about many of the other in-ear headphones that I’ve tested.

Adding to its sporting credentials is the sweat and splash resistant design, though they aren’t waterproof so they won’t survive being submerged in water. 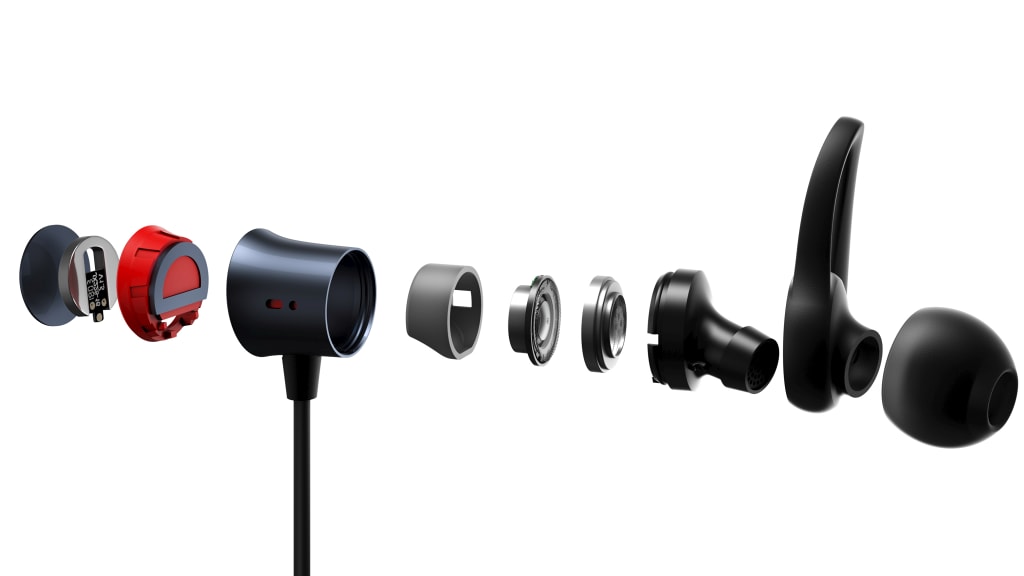 It’s easy to get a good fit with the Bullets.

Battery life is fairly standard at around seven hours, but battery anxiety is kept at bay thanks to impressive charging speeds that give you five hours of listening time from a mere ten minute charge, thanks to a USB-C charging port.

Most surprising is how it punches above its weight in the sound department. The Bullets Wireless has a wonderfully balanced sound and a surprisingly wide soundstage for such compact buds. Instruments in the lower range of the audio spectrum come through naturally, the mids are crisp, the vocals are pronounced and the bass response is deep without being overpowering. The clarity in the audio is outstanding with no signs of distortion even with the volume turned up all the way to the max.

One misstep is the lack of support for AptX HD which would’ve taken sound quality up another notch, but its exclusion here is somewhat forgivable given its price tag.

My other major gripe isn’t even related to the headphones but its included carrying case. It’s too small to fit without plenty of coiling and bending which makes me feel a little anxious about putting so much stress on the headphones. The snug fit also makes it almost impossible to store the headphones inside the case without the magnetic earbuds detaching from each other, causing them to turn on and waste precious battery life. Thankfully, the Bullets Wireless do automatically turn off after a few minutes if no music is playing.