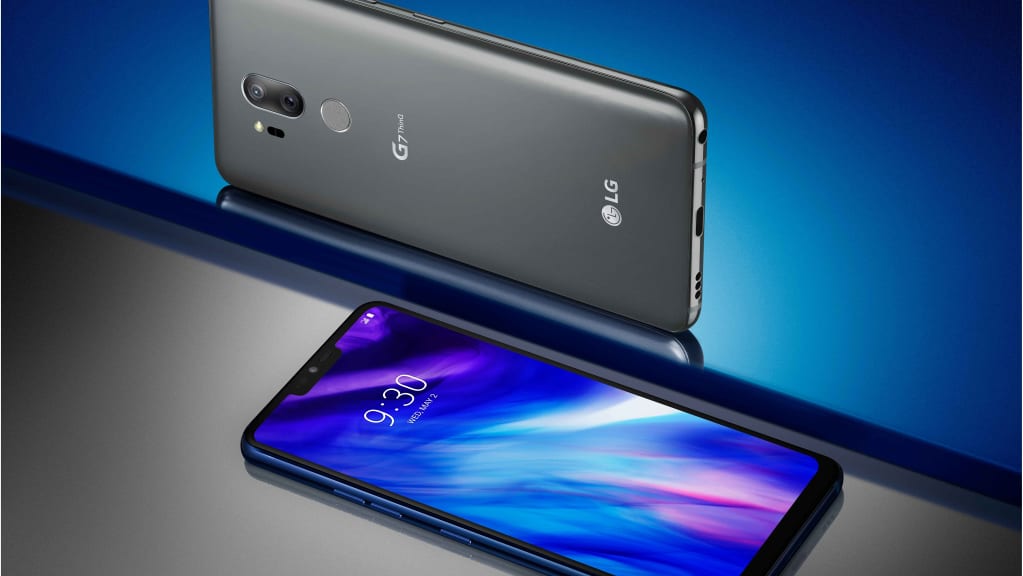 With a tall, notched screen, a focus on AI-powered features and an honest-to-goodness old-fashioned headphone jack, the LG G7 ThinQ leans hard into some 2018 smartphone trends while completely rejecting others. The result is a solid device with a few noteworthy features you won’t find on competing phones from Samsung or Sony, even though the AI stuff turns out to be mostly hot air.

The G7 looks a little like an iPhone X that’s been stretched vertically, but its display notch integrates with apps a bit better.

Smartphone displays have been creeping taller for a little while now, with the standard 16:9 widescreen ratio becoming 18:9 in some phones last year, and 18.5:9 for Samsung’s Galaxy S9. The G7 stretches further with a 19.5:9 ratio, filling almost all of its front panel with usable screen save for a little notch island housing the speaker and sensors at the top. LG refers to the space either side of the notch as the “second screen”, and it’s here you get your notification icons and so on.

I think the phone looks great, and the tallness of the screen means the notch and second screen can sit unobtrusively on the top of full-screen apps and videos. The only time you’ll notice the notch is on your home and lock screens, where your wallpaper wraps around on either side. But even then there’s an option to make the second screen black and hide the notch entirely. The display itself is surprisingly not an OLED, but is beautifully sharp and with impressive contrast for an LCD, with excellent HDR. 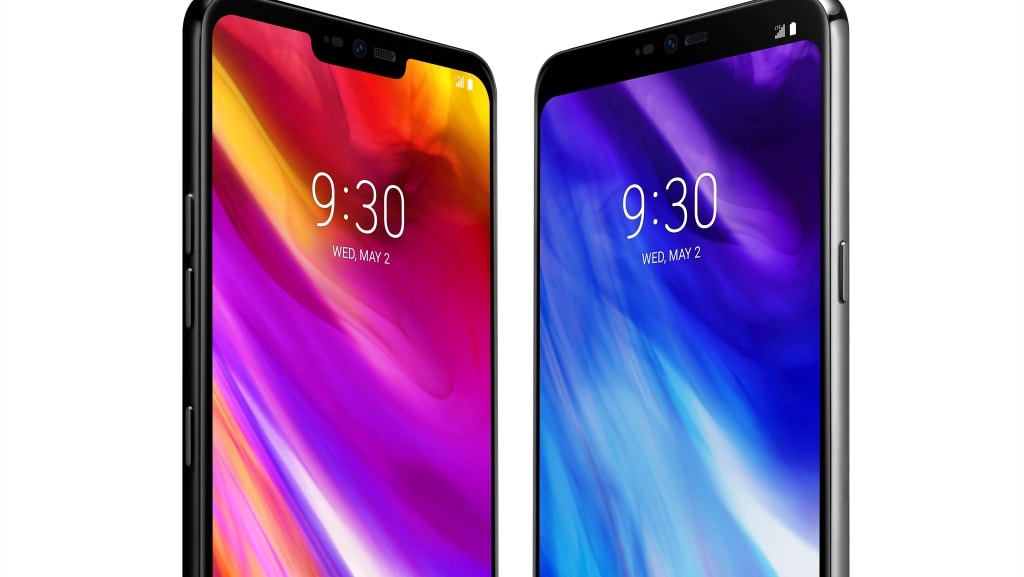 If you like you can hide the notch entirely, but it’s only guaranteed to work on the home and lock screens and LG’s own apps.

But while the $1099 G7 does look a lot like a blend of the Galaxy S9 and Apple’s iPhone X, LG has baked in a lot of differentiating features and interesting touches.

For starters there’s a 3.5mm jack. This not only allows for easy use of the huge majority of corded headphones, but it connects to a high-end 32-bit Hi-Fi Quad DAC, with DTS-X surround, making it clear LG wants to attract audiophiles spurned by the lack of jacks on many recent phones. I generally use Bluetooth cans, and I was pleased to find full support for both LDAC and aptX HD, and a handy notification that allows quick switching between two Bluetooth devices and the speakers (or corded headphones).

If you’re not using headphones at all, the G7 can pump out a surprising level of sound thanks in part to what LG calls its “boombox speaker”. Essentially the hollow part of the inside of the phone is used as a speaker chamber, with the sound pumped out the bottom of the phone. The tradeoff is you miss out on stereo for when you’re holding the phone close, but put it on the table and you can feel a (quite small) room with great-sounding music. 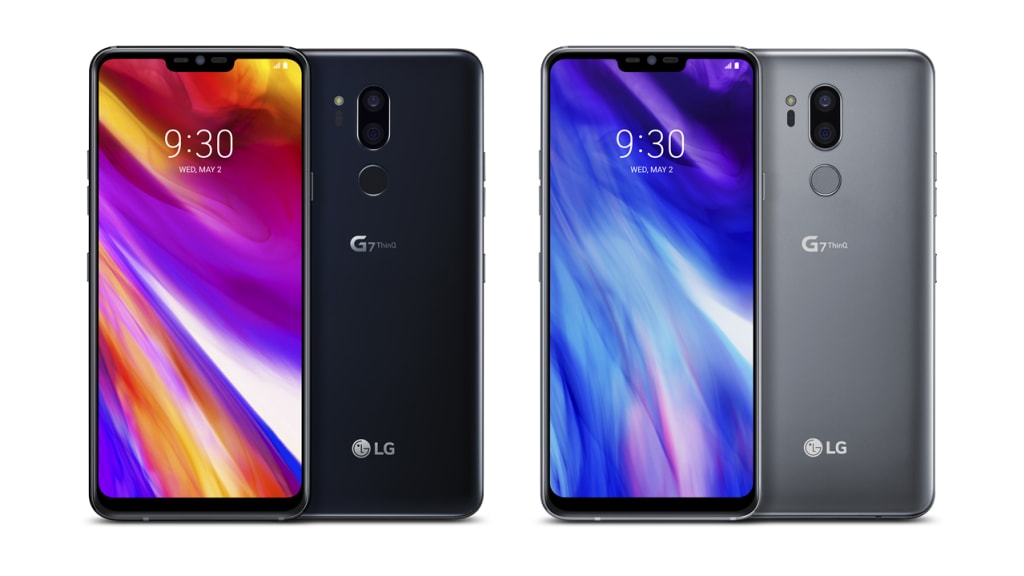 The G7 is all business around the back, with the standard fingerprint sensor and a pair of cameras.

Another unique touch is that the G7’s screen can go incredibly bright, to the point that running it at maximum for too long would destroy your battery and overheat your device. The phone won’t let you do that of course, with brightness usually capped at a safe level, but there’s a “Boost” button that will temporarily go to max, and automatically return to normal after a bit. This isn’t something you’ll use often, but it’s great when you need to quickly read a message or look at a map with the afternoon sun shining directly on the phone.

Those with butter fingers might also appreciate that LG has gone the extra mile with its structural integrity certifications, having the G7 rated IP68 for dust and water ingress but also meeting the US military MIL-STD-810G standard, meaning it should easily survive shock from drops (please note I have not personally tested this).

And then of course there’s the AI features. The preposterous “ThinQ” branding — the same that LG uses on its connected home appliances — shows you how badly the company wants to position its phone as the most artificially intelligent of them all.

The G7 has a dedicated button to summon the Google Assistant, a first for a phone. In reality it feels identical to squeezing the sides on Google’s own Pixel 2 and Pixel 2 XL, and isn’t much more convenient than just long-touching the Home Button. Still, Assistant is way more useful than Bixby, which gets its own button on Samsung phones.

Calling for Google out loud is still the best way to access the Assistant (as it can unlock the phone and give full access if you’ve set up Voice Match), and to help with this LG has included far-field mics for voice recognition. The idea is that you can put the phone on a charging dock somewhere and use it like a smart speaker, calling out commands. It works pretty well too, especially paired with the loudness of the speaker.

The Assistant button can be double-tapped to open Google Lens, which is baked into the phone, and can be used to run Google searches by just pointing your camera at real world objects. Scan a book cover, for example, and you’ll be offered reviews or links to purchase it. The G7 can also be unlocked by LG’s own face or voice recognition. I found these both worked well, but a warning when turning them on lets you know that a “similar” face or voice would also open your phone. I’ll stick with fingerprints and Google’s Voice Match.

Rounding out the AI features is something LG calls AI Cam, which I thought at first would be something akin to Lens but in fact is much weirder. When you turn it on and raise the camera, white text starts appearing on the screen to indicate what the phone believes it’s seeing. The idea is that the G7 knows what you’re photographing and will adjust the parameters of the shot accordingly, like a more intelligent “auto” mode. The problem is that the rapid-fire text (which is, by the way, incredibly annoying and distracting) is almost never correct. Point it at a desk it might start suggesting it sees an “infinity pool”, a potted plant might give back “transportation”. Even when it does get it mostly right (a selfie view brings up “headshot”, “close up”, “one person” and “reading”, so that’s three out of four), I can’t say the result is better than the regular auto mode. I mostly ignored AI Cam.

In a more general sense, the photography experience here is very good. The two shooters are both 16MP, and LG has stuck with its distinctive setup of having one regular angle OIS lens and one super-wide angle lens so you can pull back and fit a lot in the frame if you need to (this secondary lens is fixed-focus, so no close ups). There’s now also a bokeh-style portrait mode, although it’s not as consistent as Apple’s or the one on the Google Pixel 2. One feature that did impress me was the Super Bright mode, which turns on automatically in dark conditions. Here you get much less defined 4MP shots, but they’re exposed enough that you can plainly see your subjects even in extremely low light.

My biggest issue with LG phones has always been in the visual identity of the software, and that remains true here as well. The default keyboard and apps just make me incredibly anxious with their crowded lines of text and overly detailed line-drawing icons. Thankfully if you, like me, can’t deal with this it’s generally easy to replace these elements with something from the Play Store, but there’s nothing much you can do about the clutter in system utilities like the settings app or notification panel.

LG’s weird visual design bleeds through to a few other unavoidable areas too. I really appreciate the effort the company has put into customisation of the Home Touch buttons which means that no matter what phone you’re used to using — even an old Samsung with the reversed back and recent buttons — you can make a setup that works for you. But at times it just seems overthought compared to stock Android.

The buttons, for example, stay a user-designated colour at all times instead of adapting to whatever app is open (you can pick white or a light pastel, not black). This makes for an ugly light-coloured bar at the bottom of many apps. You can opt to hide the buttons (entirely, or on an app-by-app basis), which makes for an attractive full-screen look similar to the iPhone X, but LG offers no system-wide gestures for multitasking or to go home. You have to swipe up from bottom to temporarily reveal the bar. Hopefully this system gets a bit of a rethink with the future update to Android P.

This is admittedly a niggle, and for every bizarre design decision there are a few great ones. I love the always on display, for example, which is very customisable and lets you turn on the flashlight, set the phone to silent, control your music or open the camera without even turning on the screen. Since the display is an LCD the always-on display does bleed a bit of light and will run your battery down, but there’s an option to only keep it activated at certain times (I have mine on for my commute and office hours), which solves both problems.
In general I’ve found the G7 easily lasts a full day of use without getting too low on juice, although when I’ve run the always-on display all day I was putting it to bed at around 10 per cent, which is a close call.

Overall the G7 ThinQ is a quietly confident phone. Awful name aside, it’s nowhere near as in-your-face about its unique features as the latest from Sony or Samsung are, but it has a lot of strengths. It’s got the sturdiest design, the tallest and brightest screen and the loudest sound of a lot. Plus, with the latest Snapdragon chip, it’s also just as fast.