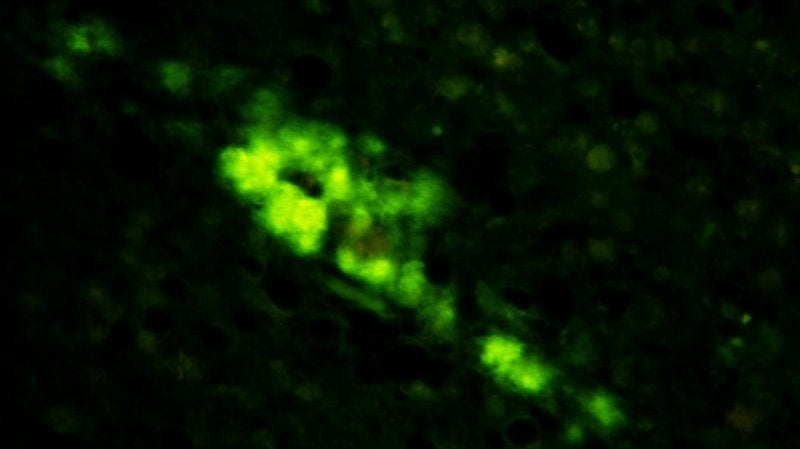 Researchers from Case Western Reserve University have synthesised an artificial human prion, a scientific first that could eventually lead to treatments for Creutzfeldt-Jakob disease and other deadly brain-wasting disorders.

Microscopic image of synthetic human prions accumulating in the brain of a mouse that was genetically altered to produce a certain human protein. Image: Case Western Reserve School of Medicine

The molecular processes involved in these brain-destroying disorders are poorly understood, but new research published this week in Nature represents a major advance in this area.

A Case Western Reserve University team led by Jiri G. Safar is now the first to create an artificial strain of human prions in the lab. Working with this strain, the researchers managed to uncover unique human-specific attributes that had previously eluded detection. And importantly, the new synthetic strain will now allow scientists to explore new avenues of research in the quest to find cures for TSEs.

"This accomplishment represents a watershed," said Safar in a statement.

"Until now our understanding of prions in the brain has been limited. Being able to generate synthetic human prions in a test tube as we have done will enable us to achieve a much richer understanding of prion structure and replication. This is crucial for developing inhibitors of their replication and propagation throughout the brain, which is essential for halting prion-based brain disease."

Simply put, prions are a specific type of misfolded protein. While that may sound harmless, this misfolding triggers a cascade of despair in which prions latch on to healthy proteins nearby, causing the formation of microscopic holes in brain tissue. The ensuing domino effect turns portions of the brain into a sponge-like substance, leading to steady and irreversible deterioration.

In humans, Creutzfeldt-Jakob disease - the most common prion-based disorder - is known to cause dementia, memory loss, impaired motor skills, loss of vision, and eventually death. It tends to peak among adults between the ages of 60 to 65, which is why it's often confused for Alzheimer's disease.

Cases of transmissible prion diseases are rare, but their long incubation periods (prion disease can hide in the brain for 30 years before it starts to inflict serious damage) and high resistance to treatment are cause for serious concern, "posing unprecedented and challenging problems to disease control and public health," as the researchers write in their study.

The mechanics behind human prion misfolding are poorly understood, but this latest advance takes us a significant step closer to the answer. Previously, scientists had created synthetic prions specific to rodents, but these prions, while affecting mice and hamsters, were not infectious to humans.

For the new study, Safar's team took a genetically engineered human prion protein, and with some coaxing, managed to get E. coli bacteria to produce a highly destructive synthetic, or recombinant, human prion (previous studies showed that infectious rodent prions could be cultivated in bacteria).

A critical aspect of the experiment was the contribution of a compound known as Ganglioside GMI - a cell molecule that regulates cell-to-cell communication. In this case, Ganglioside GMI was responsible for triggering infectious replication and transmission.

In tests, the resulting synthetic human prions were shown to be infectious to transgenic mice, which were "humanised", or genetically altered to express a particular human protein. In two separate experiments, the recombinant human prion caused serious neurological dysfunction in infected mice after an average of 459 and 224 days.

"The neuropathology, replication potency, and biophysical profiling suggest that a novel, particularly neurotoxic human prion strain was created," declare the authors in the study. But to be fair, the effect of that this artificial prion might have on humans is unknown.

This new finding also furthers our understanding of how prion-based diseases work in the human brain. The rate and replication of an infection, the new research suggests, is determined by specific glitches in a molecule's structure, and not by the mere presence of misfolded proteins. These molecular glitches occur in an area called the C terminal domain, which is known to control the growth rate of infectious prions.

We're still a long way off from having a treatment or cure for transmissible spongiform encephalopathies, but scientists now have the means to create synthetic human prions in the lab. This will undoubtedly aid future studies as synthetic nonhuman prions, while reasonably informative, were not able to convey the full human story.