The researchers, Rohan Chabukswar from United Technologies Research Center Ireland, and Kushal Mukherjee from IBM Research India, created the algorithm in response to a map posted by reddit user user kepleronlyknows, who goes by Patrick Anderson in real life. His map showed a long, 32,187km route extending from Pakistan through the southern tips of Africa and South America and finally ending in an epic trans-Pacific journey to Siberia. On a traditional 2D map, the path looks nothing like a straight line; but remember, the Earth is a sphere.

Anderson didn’t provide any evidence for the map, or an explanation for how the route was calculated. In light of this, Chabukswar and Mukherjee embarked upon a project to figure out if the straight line route was indeed the longest, and to see if it was possible for a computer algorithm to solve the problem, both for straight line passages on water without hitting land or an ice sheet, and for a continuous straight line passage on land without hitting a major body of water. Their ensuing analysis was posted to the pre-print arXiv server earlier this month, and has yet to go through peer review.

One obvious way to calculate the straight lines would be through a so-called “brute force” method, requiring a computer to measure the length of every stretch of ocean. To that end, Chabukswar and Mukherjee acquired a map from NOAA showing the Earth’s surface at a very reasonable resolution of 1.8km. Anything above sea level was considered land, and everything below water – an obvious limitation, but it’s the best data the researchers could acquire. More problematically, however, the high degree of resolution provided required a computer to parse through a mind-boggling number of routes.

Chabukswar and Mukherjee did not have the computing power for such an operation, nor the time, so they turned to an optimization scheme called “branch-and-bound.” Computer scientists use branch-and-bound algorithms as a way to solve optimization problems, and it lowers the overall amount of search time by breaking up tasks into smaller chunks, or subsets. The optimization happens as each subset is analysed, and pruned when it doesn’t meet the search criteria. As the branches and sub-branches are iteratively eliminated, so too is the amount of data that requires analysis.

Armed with this technique and a regular laptop computer, Chabukswar and Mukherjee calculated the sea route in just 10 minutes. And fascinatingly, their algorithm came to the same answer as the one shown in Anderson’s map, showing a straight line that extends from Pakistan to Russia along a path that runs for 32,089.7km. 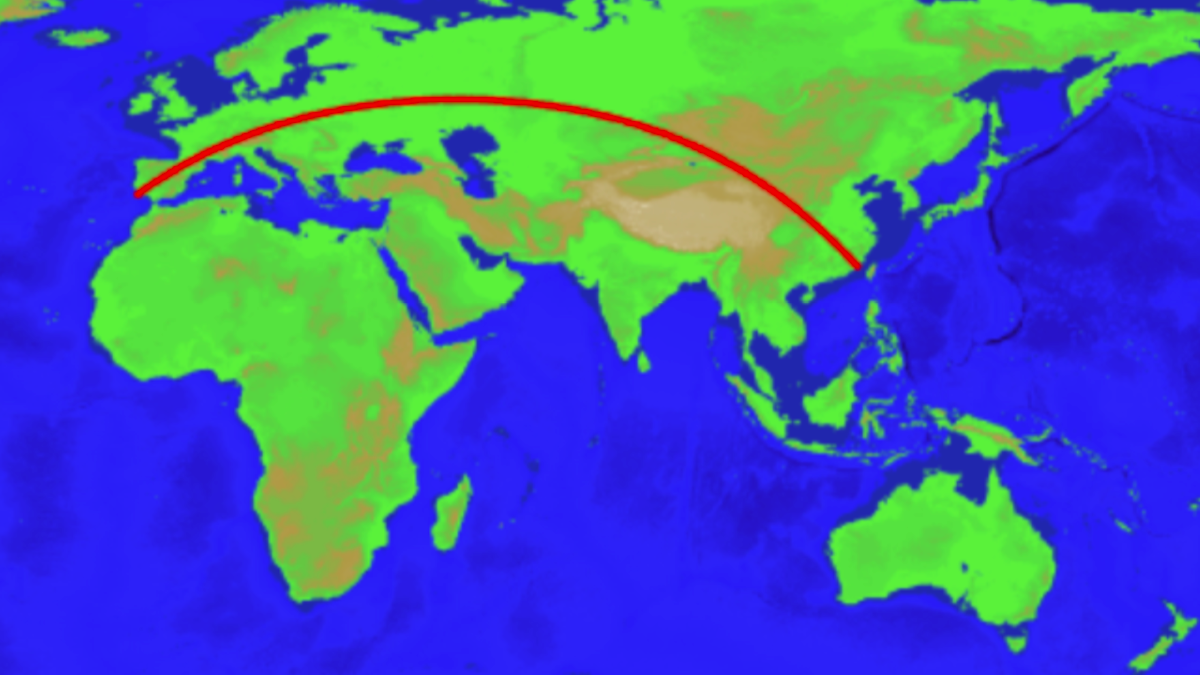 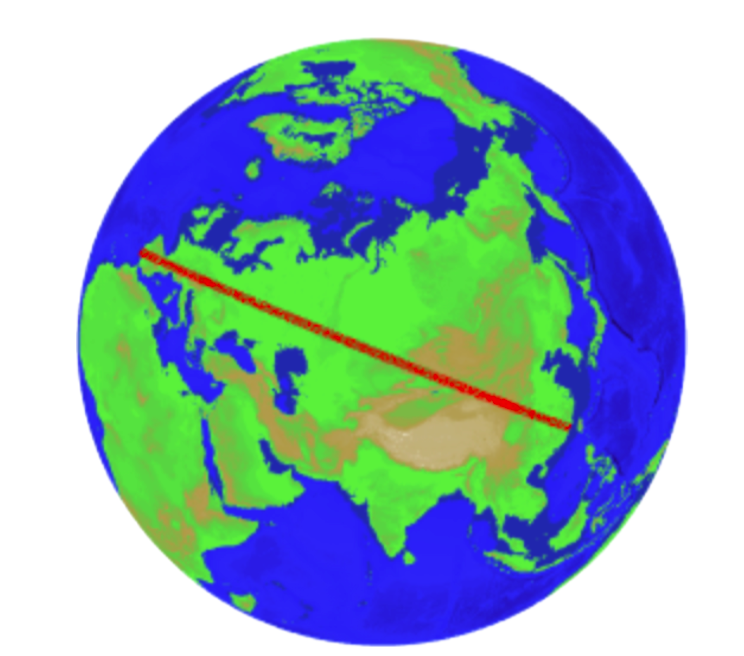 This view with a perspective directly above the path reveals a straight line.

The researchers also calculated the longest possible straight line on land without hitting a major body of water, such as a lake. The path, which took the computer 45 minutes to calculate, begins near Jinjiang, China, and cuts a swath through Mongolia, Kazakhstan and Russia. The line continues through Poland, the Czech Republic, Germany, Austria, Liechtenstein, Switzerland, France, Spain, and finally ending near Sagres in Portugal. That’s a total of 15 countries! It’s not as long as the longest sailable path, but it still covers an impressive distance totaling 6,985 miles (11,241 km).

Chabukswar and Mukherjee call it a “driveable” path, but that’s highly unlikely given the many obstructions, such as mountains and forests, that are sure to be in the way. Also, the land path intersects many rivers, which the researchers excluded as a variable. Some major detours would likely be required to locate bridges, and to avoid some dangerous or challenging terrains.

On a similar note, the sea path, while a straight line, is probably not the safest or most ideal route given that it skirts treacherous Antarctic waters. What’s more, the most expeditious sea route from Pakistan to Siberia would involve a trip through Indonesian waters, and the Philippine Sea. As the researchers conclude in their study:

“The problem was approached as a purely mathematical exercise,” the researchers write. “The authors do not recommend sailing or driving along the found paths.”