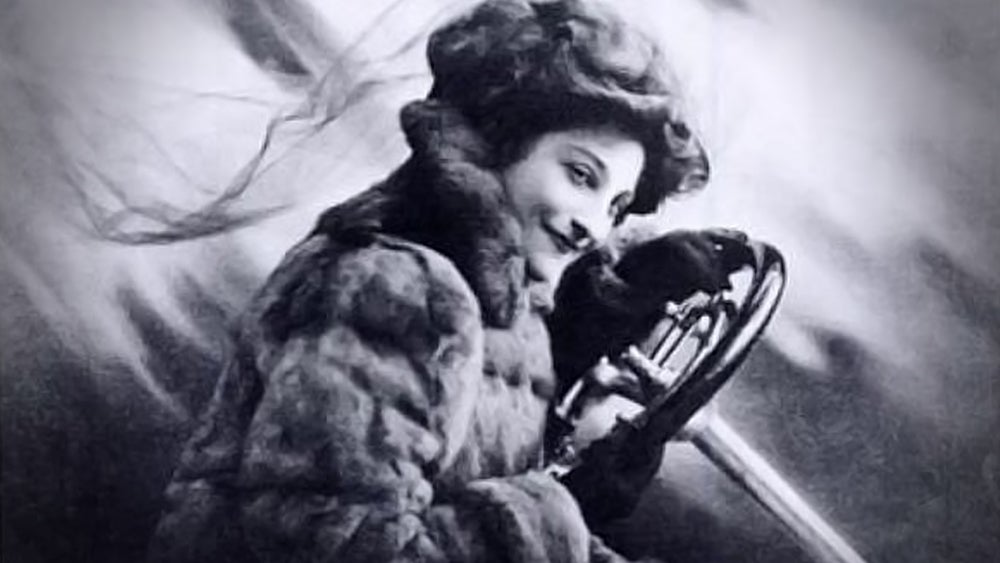 Photo: The Woman and the Car (Wikimedia)

In an era long before women were thought capable of doing much of anything, Dorothy Levitt decided that she wanted to do it all. Avid horseback rider, self-styled motoriste, race car driver, boat racer, journalist and amateur aviator, Levitt was a woman well before her era and, at the same time, exactly what Edwardian Britain needed.


Dorothy Levitt was born Elizabeth Levi in Hackney, London in 1882, and she had the taste for speed on her tongue right from the start. Her early life isn’t really well-known, but she often fell back on her experience as a horse rider to describe her racing life. “It is far harder work to sit in a car than to ride a galloping horse over the jumps in a steeplechase,” she said in a 1906 edition of the Penny Illustrated Paper. She had been employed as a secretary at Napier & Sons, a British engineering company that produced luxury cars and aero engines. Through her connections there, she met Selwyn Edge, who drove Napier cars in multiple races and saw the influence of the publicity that Camille du Gast was receiving in France. Edge saw opportunity in Dorothy Levitt: here was a girl who could do for England what du Gast had done for France.

The Penny Illustrated Paper details that Levitt’s parents were arranging a marriage for her, so the decision was easy. She left home and headed off to Paris with Selwyn Edge, who arranged an apprenticeship with a French automaker, first as a cleaner before allowing her to work her way up to machinist and chauffeur. Edge provided her with plenty of cars and motor boats to drive in order to promote his dealerships, but Levitt’s ambition exceeded being under someone else’s command. 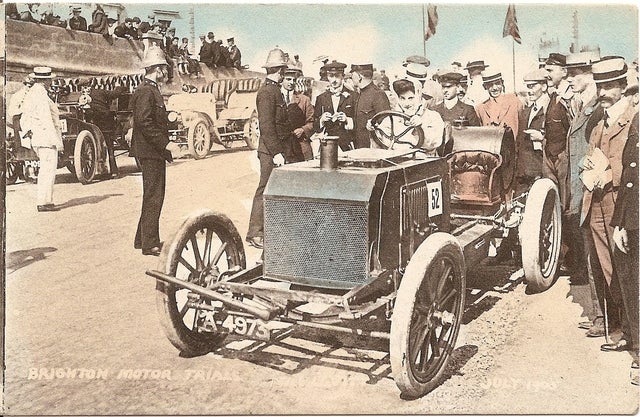 So she went back to London and decided that she would teach women how to drive. And she was good at it, too — so good, in fact, that she quickly became the teacher for Queen Alexandra and the Royal Princesses, along with other members of aristocracy and tourists. Not a bad gig for a young woman in her mid-twenties.

In April of 1903, Levitt took on her first motor race, becoming the first English woman to do so. Although she wasn’t a prizewinner, Levitt used it as determination to come back stronger. She took part in the 644km run from Glasgow to London while achieving a nearly-perfect score. She became the first woman to participate in a speed competition that year as well, astonishing the onlookers who thought that a woman could be successful in a man’s sport.

And the fact that she didn’t have the stereotypical “Amazonian” look – what we might today call ‘butch’, or a tall woman with short hair who dressed as a man — drew even more attention to her. Levitt insisted on driving in outfits that emphasised her feminine figure. It was her very obvious sign that she was not going to compromise herself in an attempt to fit in, because she could drive just as well as any man. Interestingly, Levitt wasn’t in it for the monetary prizes. She states in The Woman and the Car that she was more interested in trophies and medals (obvious signals of her success) than she was in bringing home a paycheck. And she’d definitely have some hardware to display. In 1903, she won her first race (the Gaston Menier Cup in Trouville, France) and kicked off her career in the motorboat racing world with a win at Cowes. She was consistently one of the fastest at the Southport Speed Trials throughout the years, insisted on running endurance races without a mechanic to save weight because she was confident in making repairs herself, championed hill climbs across Britain and became the world’s fastest woman — twice.

She was setting records in her Napier faster than she was driving. In 1905 she set her first Ladies World Speed Record with a speed of 129km per hour. The next year, determined to beat her own record, Levitt recorded a speed of 146km per hour. For comparison, men at the time were setting land speed records of 175km per hour.

Levitt also championed the world’s first ever Water Speed Record, clocking in at a significantly slower 31km per hour in a 40-ft 75-horsepower Naper speedboat. She was later commanded to the Royal yacht by King Edward VII himself, who not only congratulated on her skill but also discussed the potential for the boat to be used in government despatch work. 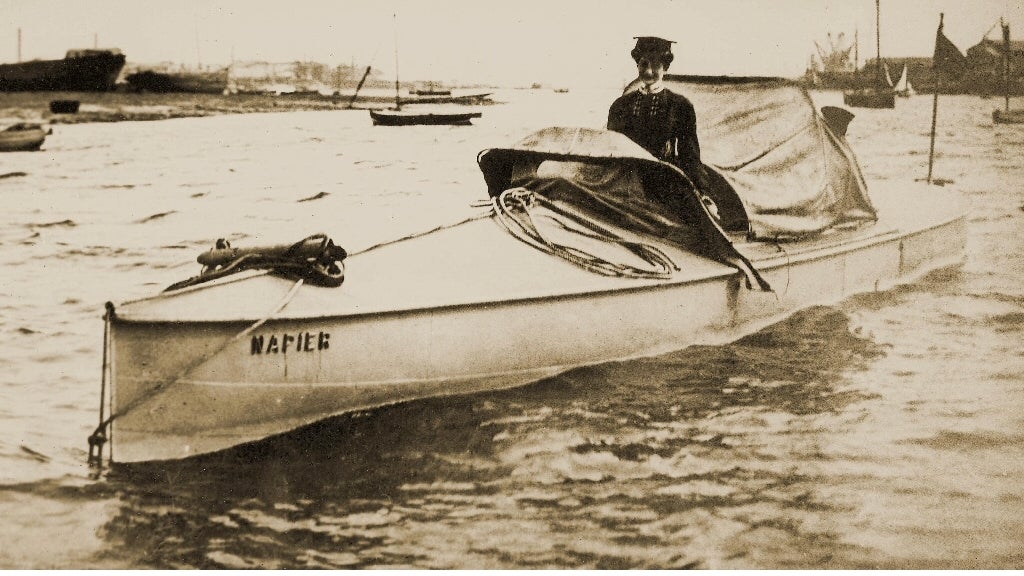 Her career began to come to its end in 1907 and 1908. The Brooklands track in England refused to take female competitors, so Levitt shipped off to Europe in 1907, where her succession of gold metals helped prove that women were fully capable of racing competitively. Still, her final race was La Côte du Calvaire hill climb in France in August of 1908. She had turned her sights to bigger, badder options.

In 1909, Dorothy Levitt wanted to fly. She attended the Hubert Latham School of Aviation alongside accomplished French athlete Marie Marvingt and Baroness Raymonde de Laroche, the only woman who had ever been licensed to drive the Antionette monoplane. Levitt’s fling with amateur aviation lasted until the following year. 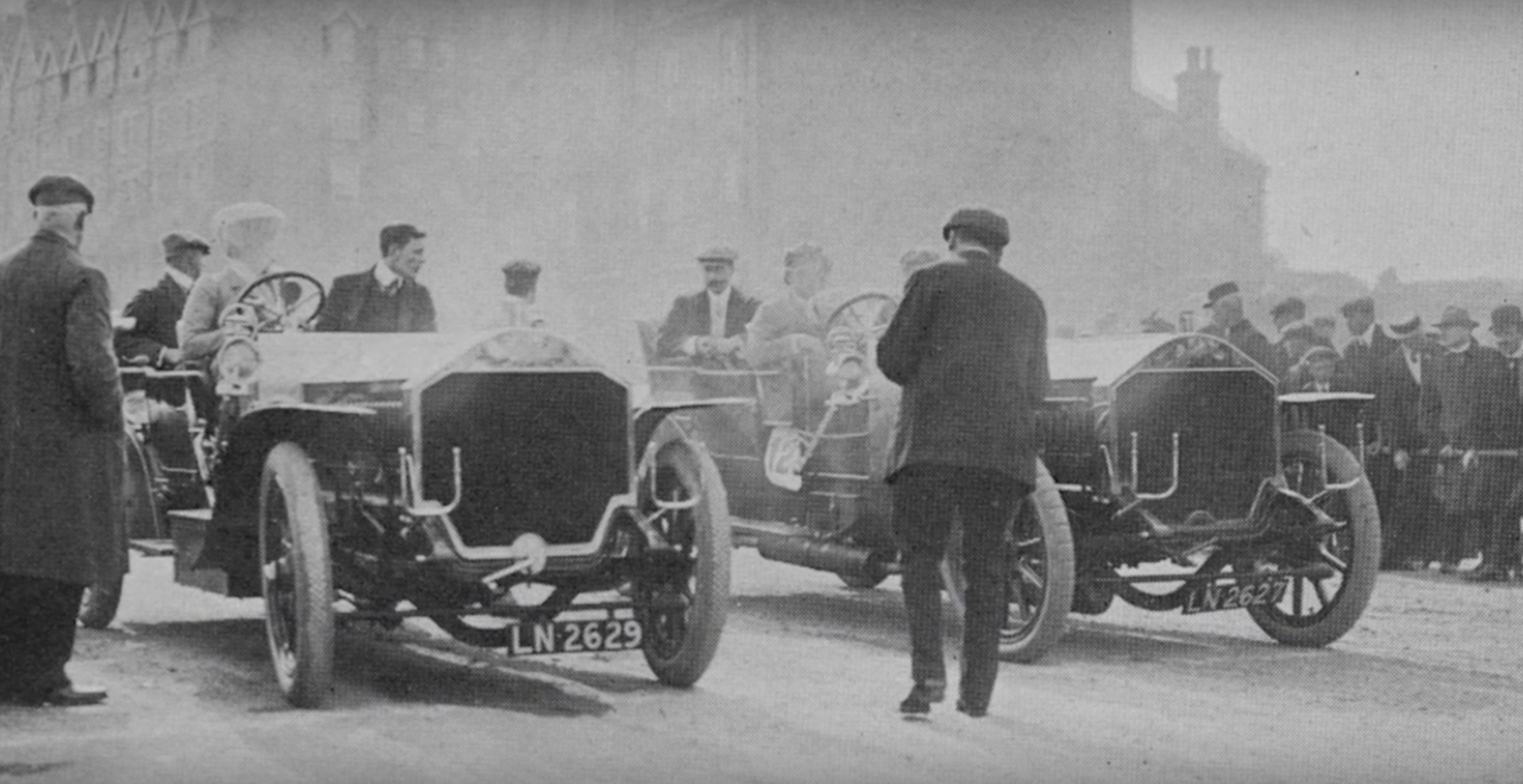 Understandably, Levitt became a pioneer of a woman’s “right to motor,” and after several articles published in The Graphic, she decided to compile her knowledge into a tidy book in 1909: The Woman and the Car: A Chatty Little Hand Book for Women Who Motor or Want to Motor (which you can still find online today). It’s an incredible guide, designed to be informal and, as the title claims, definitely chatty. Levitt firmly believes that any woman is capable of getting behind the wheel to enjoy the pleasures of driving. “Motoring,” she states, “is a pastime for women.”

The book details everything an aspiring driver might need to know. If you need a car, she recommends a single-cylinder car of 8 horsepower or less, preferably a De Dion, which she believes is best for women as they’re less complicated and easier to handle than something more powerful. Chapter 2 is dedicated to the all-important discussion of dress: how to look like a fashionable lady while still protecting oneself from the elements – and, of course, how to ensure you won’t ruin those fashionable clothes with a pair of overalls. If you’ve never driven before, then don’t worry; there’s a step-by-step process on how to get started. Most troubles that would plague a driver on the road are discussed, as well as how to fix them and what tools you’d need (because women, she ensures us, are fully capable of some simple repairs). 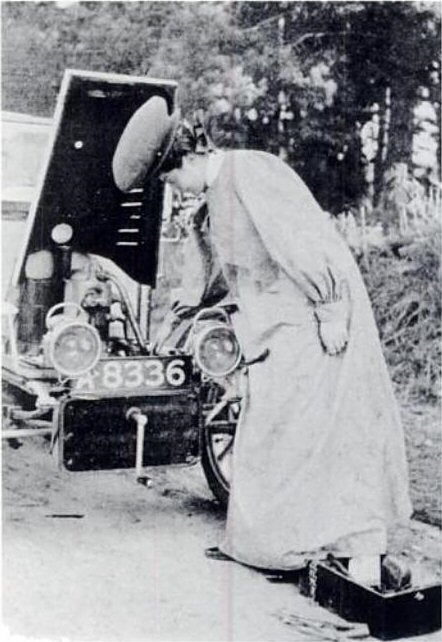 And if you’re a woman driving alone, don’t forget some sort of protection. Levitt recommends a Colt revolver and frequent practice to keep yourself sharp – but dogs are also a great option, since they take to cars with ease. She has important instructions on the kinds of things one should always keep in a drawer under the seat (the equivalent of today’s glovebox): your driving gloves, an extra handkerchief, a powder-puff, and, most importantly, chocolates. And don’t forget to carry along a hand mirror; not for vanity, but to hold up to check to road behind you so that you don’t have to turn around.

Yeah. Dorothy Levitt was pitching rearview mirrors about seven years before they were adopted by automakers as an integral part of the car.

But after 1910, Levitt disappeared. Where she had once been scheduling talks about her experiences behind the wheel and providing multiple columns for newspapers, she suddenly seemingly dropped off the face of the Earth, taking part in no public engagements and doing nothing that would catch your eye in the headlines. She was found dead in her bed in 1922, age 40. The cause of death was determined to be “morphine poisoning while suffering from heart disease and an attack of measles.” She had been known to suffer from occasional bouts of ill health and you can wonder if maybe that was what ended her career, but we can only speculate.

But we do know for sure that Dorothy Levitt’s determination to show that women were just as deserving of the pleasures of the automobile as men enabled countless women, from Royal birth to the everyday citizen, to get behind the wheel. Her name may not be the first we think of when we remember the great women of motorsport, but her participation set off a ripple effect that has helped enable women to get behind the wheel today.