Thanos' Motivations In Avengers: Infinity War Have Much Stronger Comic Connections Than You Think 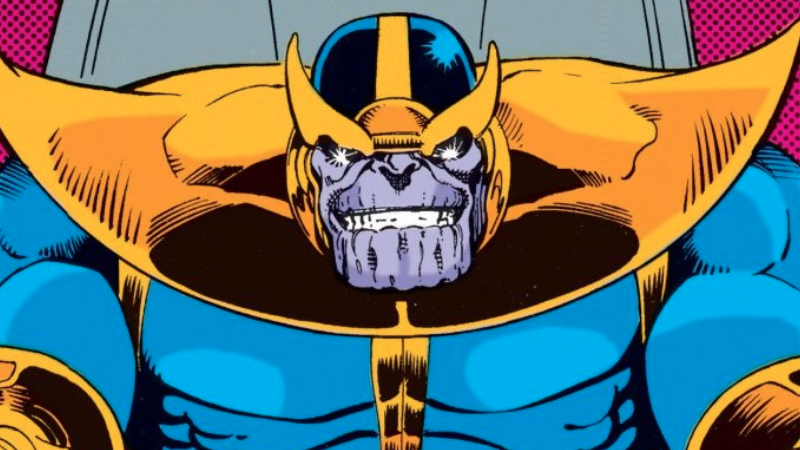 Thanos' quest for the Infinity Stones comes to a head in Avengers: Infinity War, but the movie also finally gives us the reason why the Mad Titan has spent six years' worth of post-credits teasers gathering such vast cosmic power. And, perhaps surprisingly, those motivations have deep roots in the comics.

Going into Avengers: Infinity War, we knew there was going to be one big difference between the film's take on Thanos and the Thanos we know of in the comics that loosely inspired the film, Infinity Gauntlet. In that iconic '90s series, Thanos performs the now-infamous snap of his Infinity Gauntlet-clad fingers to woo the female personification of Death into accepting him as a lover - but Death is not in Infinity War, and so Thanos has altogether different motivations for gathering the stones. 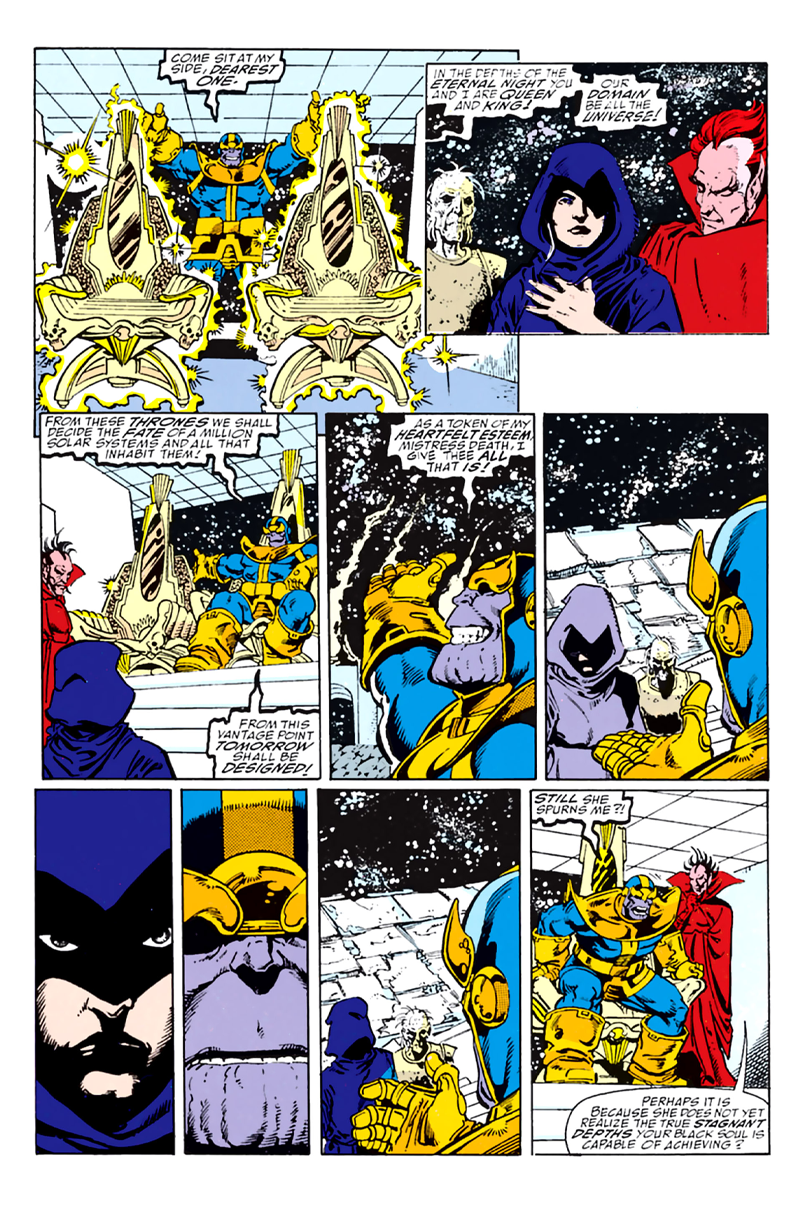 In the film, Thanos's plan has a more grimly ecological bent: He firmly believes that the population of the universe has grown too much to survive on the finite resources of the cosmos.

So, he wants to kill half of them, in the hopes that a drastically reduced population will force civilisations to better limit themselves and survive for future generations, instead of devolving into an early end fighting and dying over a lack of resources.

But it isn't actually a change from the comics at all - Thanos has the same reasons for wanting to cull the population of the universe, he just doesn't express them in Infinity Gauntlet. He expresses them almost a year prior, in the pages of Marvel's Silver Surfer comic.

To set up Thanos' revival and the impending event, Jim Starlin - the creator of the Mad Titan - took over writing duties for Silver Surfer starting from its 34th issue, in February 1990.

The storyline saw the Surfer encounter Mistress Death and Thanos for the first time, as Death tasks the revived Thanos with correcting a great imbalance in the universe. In Silver Surfer #35, Thanos shows the Surfer what that imbalance is: There are too many people alive for civilisation at large to last much longer. 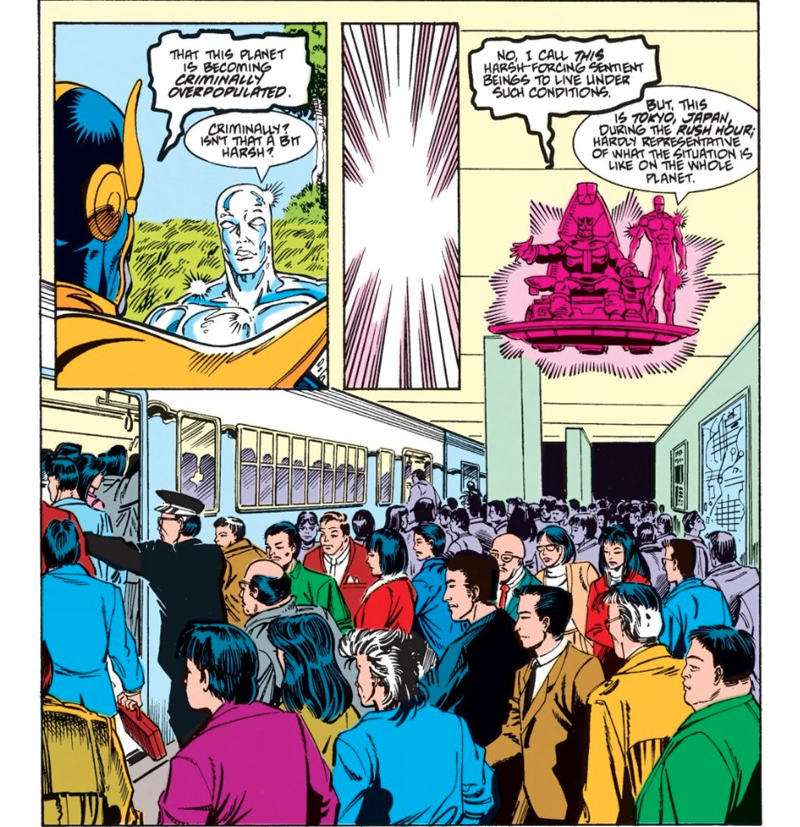 Thanos whisks the Silver Surfer to Earth and a small planet called Salaria to explain his reasoning, saving his harshest judgements for Earth. More humans than ever are living longer, consuming more resources (and turning them into waste), and dangerously damaging the environment than ever before.

Thanos sees correcting the imbalance as a mercy to what he sees as a sentient species being cruelly forced to live in intense conditions, something that the Surfer strongly disagrees with. This leads to the Silver Surfer wanting to start a fight to stop the Mad Titan. 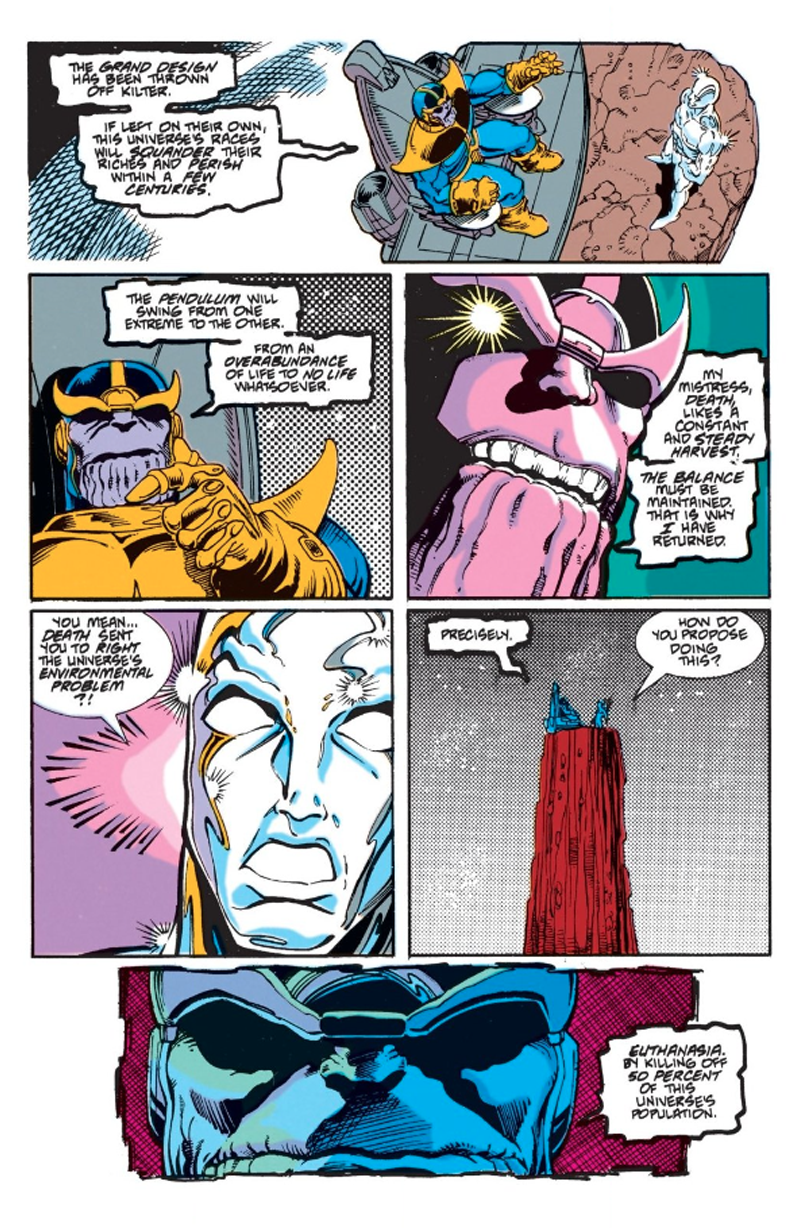 It's then that Thanos lays down a supremely dick move, as he is wont to do. In hopping from Earth to Salaria, Thanos used the Surfer to pick up bacteria harmless to humanity but hitherto unseen on Salaria, causing the outbreak of a deadly illness that - thanks to some sneaky time-hopping from Thanos - has already caused half the Salarian population to die out.

The Surfer can either fight Thanos, or save the rest of the Salarians. Thanos goes off on his merry maniacal way, and the Surfer races to cure what's left of the species. 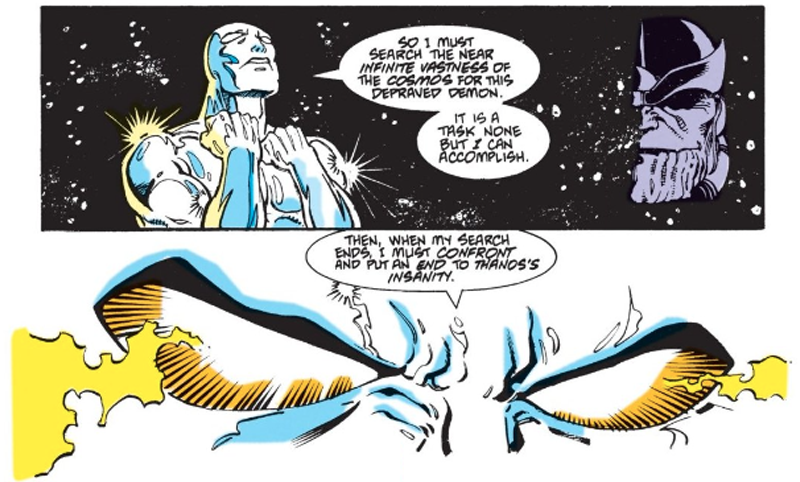 It's the setup for the Surfer's realisation of just how awful a threat Thanos is, leading to the eventual events of Infinity Gauntlet a year later. Sadly, the MCU didn't have a Surfer (not yet anyway) to warn them about just how big a threat Thanos would end up being - but at least his motivations had a much closer link to the comics than you might have thought.