This Bizarre Fish Hides A Nasty Switchblade On Its Cheek 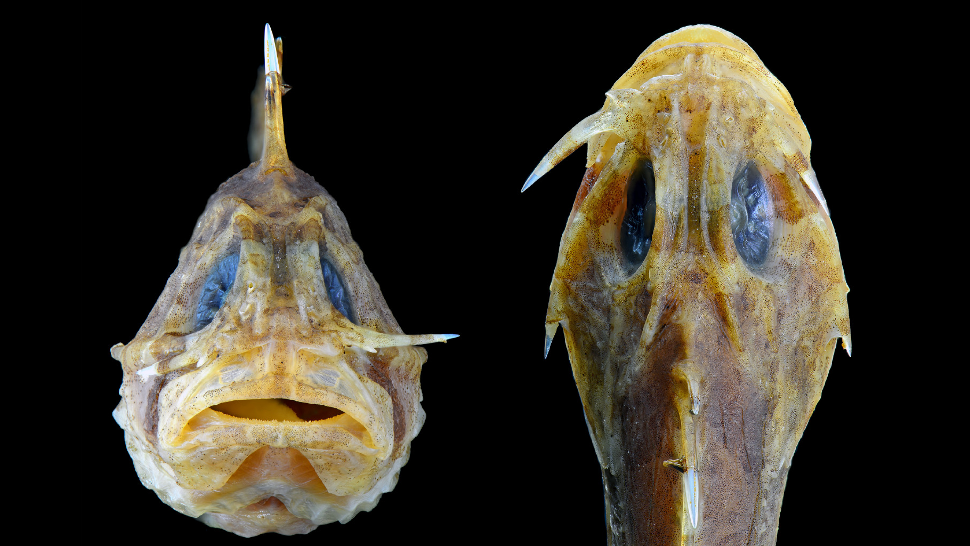 The scientists who discovered the strange feature are calling it a "lachrymal sabre", but for the predators who dare to mess with this type of stonefish, the unique switchblade just means trouble.

A stonefish with its switchblade in the deployed position. Image: W. Leo Smith et al., 2018

"We report on the discovery of a remarkable defensive specialisation in stonefishes that was identified during a [genetic] study of scorpionfishes and their relatives," opens a new study detailing the strange animal, now in the science journal Copeia.

A "remarkable defensive specialisation" indeed. When predators approach or attempt to eat this resourceful creature, the boney switchblade suddenly appears. The University of Kansas researchers who discovered the lachrymal sabre say it could act as a visual deterrent, or as a literal pain the mouth: Any larger fish who dares to swallow the stonefish is in for a rather unpleasant surprise. But it's also possible that the switchblade is used in fights between members of the same species.

Not much is known about stonefish, a colourful and strange-looking fish native to the Pacific and Indian oceans. And that's probably why the team, led by William Leo Smith of the KU Biodiversity Institute and Natural History Museum, were the first to discover the protuberance, which doesn't exist in any other fish known to science.

In addition to finding this previously-unknown feature, the genetic analysis revealed that stonefish are more closely related to flatheads, sea robins and scorpionfish than previously thought - a finding based on the analysis of 113 different physical characteristics and 5280 different genetic traits of 63 different stonefish species all equipped with the lachrymal sabre (phew, sounds like a lot of work).

"I don't why this hasn't been discovered before," said Smith in a statement. "It's probably because there are just one or two people that ever worked on this group. We took five or six families and were able to resolve the problems in their classifications. To have this really strong anatomical feature visible from the outside is really helpful. To have a big map of how everything is related and evidence for it is what we're all hoping for. We have this feature and get into the genetics of how it could have evolved."

All stonefish species with the sabre had it on their cheek below the eye. To unleash the switchblade, the fish trigger an unusually large number of ligaments and muscles that are attached to the lachrymal sabre system.

"There can't be any other reason for those muscles and ligaments except to control this mechanism," said the KU researcher. "This whole group of fishes is called the 'mail cheek fishes' or Scorpaeniformes, where the bones under the eye attach to the gill skeleton. Because all these muscles are attached to the gill skeleton, it allows for all this force which causes the lachrymal sabre to deploy."

Should the switchblade fail, the stonefish can rely on another potent defence: Venom. Stonefish are among the most toxic fish in the world, featuring poison strong enough to kill a human.

Nasty things, these are.