Embargoes haven’t officially lifted on the next batch of Ryzen desktop CPUs, but as is always the case, that doesn’t mean some cheeky bugger on the internet hasn’t got their hands on the new silicon early.

AMD’s official embargo for the second generation Ryzen CPUs – which includes the eight-core Ryzen 7 2700X, 2700, and hecta-core Ryzen 5 2600X and 2600 chips – won’t lift until next week. But Spanish tech website has gotten around the embargo – probably by getting a chip from a distributor or partner, rather than AMD direct – and posted some benchmarks. 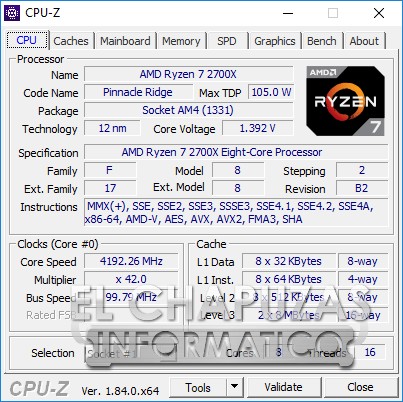 The entire review is in Spanish, although even with a dodgy Google Translate you don’t have to go far before raising a few red flags. The Spanish reviewers didn’t test the gear with the latest 400 series motherboard chipsets, which are designed to take advantage of the Ryzen refresh.

They also noted that they didn’t have the latest drivers for the CPU, which makes sense as AMD would have only supplied the most up-to-date drivers under embargo (as AMD did for Kotaku and other outlets in 2016, when the original Ryzen desktop CPUs launched). That puts a huge question mark on a lot of the benchmarks, like the 3D Mark scores.

But the figures do at least put some information into the public sphere: the 2700X’s base frequency of 3.7GHz jumps up to 4.35Ghz (although the authors were only able to get all 8 cores to 4.2GHz, which could have been influenced by not having the latest BIOS and a motherboard on the older 300-series chipset). Temperatures are also reportedly improved, hitting about 56o under stress and resting around 31o at idle.

Provided you take a huge bucket of salt, you can read the rest of the info on the 2700X here. It’s likely that more and more benchmarks will start to pop up just before the official embargo drops, either on YouTube or from other outlets getting chips from vendors. And as firmer comparisons start to drop, we’ll let you know.